A review by Sheridan Alford

Owls of the Eastern Ice: A Quest to Find and Save the World’s Largest Owl, by Jonathan C. Slaght 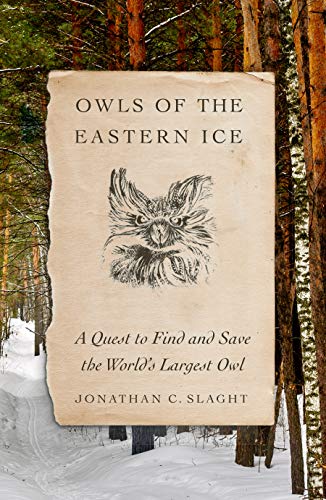 As a person who reads often but tends to reach for a novel or self-help book, I found Owls of the Eastern Ice a fresh taste of how exciting a work of narrative nonfiction can be. My broad interest in birds, along with an intangible personal connection to owls, is what drew me to this book. I have no emotional connection to the writer, the location, the research described—all background details to me until I started to read. Jonathan C. Slaght’s ability to entice the reader by creating such gorgeous winter wonderland—and sometimes not so wondrous—images of Russia while diligently providing explanations and information is captivating. The story is never dull, and readers gain insights into natural history, cultural climate, and research protocol throughout.

Slaght captured my interest by telling the stories of the people he encountered throughout the journey. I was constantly enthralled with the experiences of meeting new townspeople and lab mates, learning about the different foods, and 10,000 ways to prepare fish and bread. These glimpses into another culture and way of life had me invested before the mere mention of the esteemed owl, which the book is largely about. From questionable fugitives to industrial hunting lodges, there is an abundance of character in a place where one might not have guessed. Katkov’s…situation, in Chapter 29, was definitely a highlight. The quirkiness, at least from a foreigner’s perspective, of places like Terney or Samarga was proven time and time again.

Along with the human obstacles, the natural roadblocks, physically and literally, were sheer hell for the crew. With ice that isn’t really ice and technology breaking down in always less-than-ideal conditions, there were many occasions when I was certain they would go back to camp and try again later. The number of times they had to drive through some form of liquid restored my faith in modern technology. When the traps were set up and the team had to alternate time in the watch tent in temperatures of –40 degrees, I was reminded of the tenacity the human body can endure and its determination to maintain homeostasis. As a person who lives in one of the hottest states in the U. S., I was positive their organs would give up before their morale.

The style of writing and gifting of information is what maintained my interest as I read. With recurring characters like Vova and Anatoliy, it was always enjoyable to learn about how they were doing years later. Even toward the end, their story came full circle when new researchers from the U. S. were introduced and the strange character saga continued. Along with the humans, the owls also have their own melodrama. As information is gathered and traps are tried and fail, we get to go on a journey of exploration and discovery. The reader feels the stress when the data receivers don’t work after so much effort, or when the owls move seemingly without reason. We eventually learn more about their habits as Slaght and his team learn them. Slaght always puts you right in the mix, as if you’re the one researching these elusive creatures.

Some of my favorite moments of the book are the observations on logging companies and researcher interactions. It seems the companies were much more willing to work with conservationists than here in the ABA Area. On multiple occasions, suggestions were made by Sergei, Slaght’s fellow researcher, and his team that the managers had no problem abiding by, whether to better personal relations or due to necessity—it was nice to see a camaraderie between the two sides. And toward the end, it was encouraging to hear that the trees the fish owls needed were usually trees of no value to the logging company. However, it was eventually, and perhaps unsurprisingly, revealed that the company may not uphold their side of the bargain.

This introduction of human dynamics was blended with natural history and the intersectionality of nature, science, and people. In Chapters 7 and 29, specifically, there were explanations of human avoidance of the Amur tigers in the area and the discord between what scientists had to say and what the townspeople believed. And although the research focus shifts to tigers in the final chapter, it was always interesting to see the initial reaction of the researchers to tigers vs. owls.

As I started Part 2 of Owls of the Eastern Ice, I could see why this section was shorter than the first. It seemed less exciting than the previous, and the instances of Slaght hearing and seeing a fish owl for the first time were not as joyous as the journey for him to get to that point. Now that he’d finally achieved his goal, I found myself waiting for something drastic to happen, which did not. But this turned out to only be a temporary lull in the action, as Part 3 brought all of the turmoil back to the forefront. With the team trying to trap and document fish owls, my excitement was restored. Now that they were caught, and they decided to name them based on location, readers can follow each owl’s storyline. I was caught in the drama of the Faata owls like it were a TV sitcom—not just the shock that the female had left the male, but also this new information on species behavior. Do they do this frequently? Is it going to be impossible to track them now that we know they can move territories?

All of these questions perplexed the team as well. Some were answered, and some were not. The newfound excitement was figuring out which methods and devices worked and which didn’t. The innovative live-bait traps of fish were ingenious, and I know the tactic would be beneficial for anyone doing similar research in the future. By contrast, the use of GPS devices was a constant struggle. As a person familiar with the woes of research, it was all too familiar reading the disappointment of failed receivers and dismantled backpacks, as well as switching your methods when you gain a new understanding for your subject.

In the end, Slaght and his team prevailed over plight after plight and were able to retrieve solid data points. I loved the revelation that the trees are dual purpose: The salmon need them for habitat, and the owls follow the salmon, exposing the guessing game of researching an understudied species. Readers are left with the strong sense that everything discussed in this book will be vital for further investigations in Primorye Province.

Owls of the Eastern Ice has a little bit of something for everyone: Mystery in the hunt for birds, memorable and quirky characters, and an unpredictable landscape. The book is so action-packed that it reads like a novel—readers will get caught in the backstories and dramas that develop as we follow Slaght through years of research. It’s also a great book for learning history, giving you information on pre– and post–Soviet Union culture and the long-term effects of societal tremors on Russian habitats. Lastly, the book provides impeccable insight and images of what it takes to survive the Eastern Ice. The book is descriptive to a level that a stranger would feel some form of familiarity if they visited Amur or ran into townswomen at the local bread shop. Owls of the Eastern Ice is highly recommended to anyone who wants an adventure and isn’t afraid to learn something along the way about the natural world. 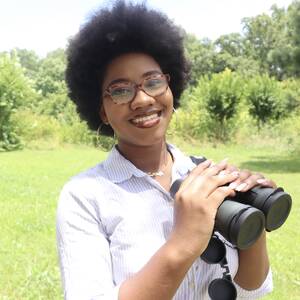 Sheridan Alford is a co-organizer of Black Birders Week, which strives to increase visibility and representation of Black birders in the field. Sheridan recently completed her master’s in Parks, Recreation, and Leisure Studies, and she has an interest in African American involvement in birdwatching and in promoting diversity in environmental outreach.