The Great, Global Quest for Penguins

The Great, Global Quest for Penguins

A review by Harry Armistead

Every Penguin in the World: A Quest to See Them All, by Charles Bergman 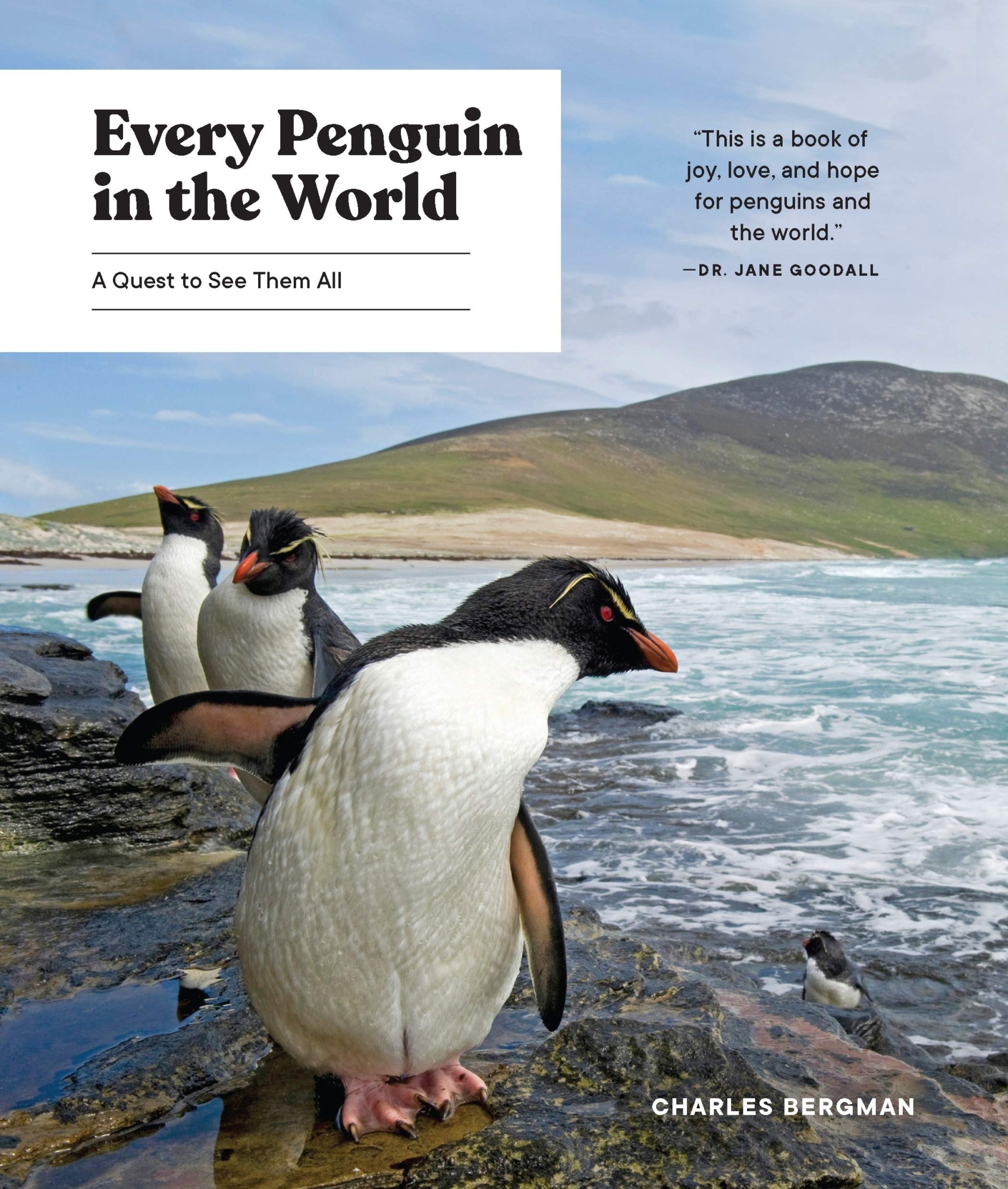 Here is a highly anecdotal, engaging story of the quest by Bergman and his wife to see the world’s 18 penguin species. Intensely personal, his quest is full of adventure, challenges, serious medical issues, danger, and descriptions of some of the most remote areas anywhere.

Enhancing the text are his 97 quality color photographs, 87 of them penguins, but also including 10 of scenery, icebergs, minke whales, elephant seals, albatrosses, the Weddell Sea, a Galápagos tortoise, pancake ice, and the author in a dramatic Antarctic ice-sea landscape.

My favorite is a spectacular, two-page spread on p. 188-189 of a South Georgia scene with thousands of distant King Penguins, a huge expanse of surf-lashed beach, and distant snow-covered peaks with a large, dark seabird scaling along the shore (Giant Petrel?).

Bergman, an English professor at Pacific Lutheran University, is widely published, including several previous books such as Wild Echoes: Encounters with the Most Endangered Animals in North America. He is unabashedly romantic, philosophical, idealistic, and his quest is full of unapologetic anthropomorphism, poetic asides, and a few references to seemingly unrelated literature.

What shines through is his inherent goodness and awe of nature. Here is a man with a big heart who is also highly learned. Bergman has taken his students on six study tours in Antarctica. He has completed two Fulbright fellowships in Latin America. He is passionate about these trips and about penguins.

He is especially concerned with Emperor Penguins. Of his photographs, 20 are of Emperors, 16 of Kings, and 8 of Gentoos. The text is redolent with subjective, descriptive quotations, such as when he writes of Magellanic Penguins: “They are the wild foam’s wild heart” (p. 67). Other moments of philosophical reflection include: “If we could more clearly see ‘heart’ and feelings and spirit in penguins, perhaps we could grow in our heart and feelings as well” (p. 124); “Sometimes we think best with the heart” (p. 108); “The deeper I went into the lives of penguins, the deeper I went into myself” (p. 109); and “A quest is not about answers…It is about the questions that compel us” (p. 123).

Not everyone is going to be sympathetic with such “touchy feely” sentiments, but Bergman’s extraordinary sincerity wins us over. It behooves many birders to be more philosophical about our enterprise. Often we are too concerned with just the facts, the spatiotemporal aspects of our hobby.

This is not a definitive penguin treatise, but instead an absorbing narrative of a quest, taking the reader to Gough Island, Cape Town, Argentina, New Zealand, the Falklands, Peru, Macquarie Island, Galápagos, Australia, South Georgia, and of course Antarctica. His quest is also a highly contemplative one.

But by way of contrast, he can also be incisive, such as when writing about Emperor Penguins, famous in the iconic movie March of the Penguins: “They choose winter in Antarctica to breed, lay eggs, incubate, and raise their chicks. Temperatures are consistently between twenty degrees below zero and fifty degrees below zero, with ferocious winds…While females leave to feed at sea, the males incubate the eggs—for about 115 days of darkness and fasting. They will eat nothing and lose 40 percent of their weight…males stand upright the whole time” (p. 101). He notes Emperors can dive 1,800 feet and stay submerged for 22 minutes (p. 102).

Some minor glitches: On p. xii, Antarctica is not an island, and on p. xxvii, there are way more than 9,000 bird species. A map with the location of such entities as Gough and Macquarie islands as well as Lake Moeraki would have been helpful. The “albino” Southern Rockhopper Penguin on p. 151 is better described as being leucistic.

Several of the photographs lack captions and fairly often photographs are not situated adjacent to the text for which they are relevant. But a major attraction are the ones that show the great context of the penguins’ world: 60 Adélies on a small, dome-shaped iceberg; the incredible spectacle of thousands of King Penguins on Salisbury Plain, South Georgia; Magellanic Penguins clustered on Argentina’s Valdés Peninsula; a large assemblage of Emperor Penguins at Snow Hill Island, Antarctica. These are worth the price of admission by themselves.

Gripping is the author’s description of the onset of extreme back, hip, and leg pain in Antarctica when he still had a mile-and-a-half of excruciating distance to go to return to a rendezvous point. In another instance, he and his wife were faced with nearly drowning when having to cross a raging river in New Zealand. They had to deal respectively with diagnoses of Parkinsonism and cancer as challenges to their quest.

The Select Bibliography, pp. 184-186, is just that, but it might have been strengthened by including the extensive penguin sections in the Handbook of the Birds of the World and the Handbook of Australian, New Zealand, and Antarctic Birds. Its inclusion of E. M. Forster’s Howard’s End, a novel of Victorian sensibilities, and Laleh Bakhtiar’s Sufi: Expressions of the Mystic Quest, while thought-provoking, is curious, but displays Bergman’s wide-ranging familiarity and fondness with the greater literary world.

Most helpful is the rest of his bibliography (listing seven of Bergman’s works, including one concerned with the Colorado River Delta), plus a list of 12 ways one can help penguins, contact information for 20 recommended research organizations, and eight additional, more general organizations. The bibliography lists 50 references. Bergman has authored four books. His articles have appeared in Smithsonian, National Geographic, Natural History, and Audubon.

Two of the best penguin books are Roger Tory Peterson’s Penguins (Houghton Mifflin, 1979) and the incomparable Penguins: The Ultimate Guide by Tui De Roy and a panel of experts (Princeton, 2013). The latter, an unfortunate omission from Bergman’s bibliography, mentions that there are more than 50 known species of extinct penguins.

An author’s acknowledgement section is often indicative of the value of a book. Bergman’s, a full four pages, makes the grade with distinction. This reviewer has seen eight of the world’s 18 penguin species, the most appealing to him being the Adélie, Chinstrap, and Little, in that order. Bergman’s title is a good read and a fine addition to the penguin literature.