A review by Dominic García-Hall

Birds of Argentina and the South–west Atlantic, by Mark Pearman and Juan Ignacio Areta If field guides had gestation periods, then the long-awaited Birds of Argentina and the South–west Atlantic’s was elephantine. Since Mark Pearman and Juan Ignacio Areta started work on it almost two decades ago, rumors of the mythical guide circled like vultures on the now quiescent Birdforum. Yet it survived its embryological traumas. It outlived 15 years of “pre-order” on Amazon. It exists.

Over that time, naturally, birding tools have changed; even the concept and design of paper field guides have evolved, let alone the innards of a typical millennial birder’s smartphone. And during this guide’s lengthy accouchement, questions were asked. Should it be one volume or two, like Robert S. Ridgely and Paul J. Greenfield’s The Birds of Ecuador: Status, Distribution, and Taxonomy? Does Argentina want a book that people will immediately hacksaw to get into their oversized vest pockets? Picture Steven L. Hilty’s Birds of Venezuela, which treated a similar number of species, putting the plates up front and detailed behavioral and biogeographical descriptions at the back, prompting me, and most people I know, to immediately reach for the scissors and duct tape. But the authors have resolved these questions while traversing the finest of tightropes.

Before we riffle the pages, it’s worth reflecting for a moment. This book is essentially the sequel to nothing, and arguably the most-wanted treatment of a country’s avifauna left on the planet. This is no remote island guide. This documents the eighth-largest country on Earth.

Accordingly, Argentina, in its vastness, is home not just to endemic avian icons, but also to genera and families that barely creep into Brazil or the archipelagic chaos of southern Chile. Not content with over 1,000 species, it also vies for holding the highest biotope diversity of any country on the planet, from the northwestern Yungas to the only remaining tract of Atlantic rainforest still visible from space. From the endemic Monte; the dry and wet Chaco; the endless Patagonian deserts, steppes, and mesetas; to immense Valdivian temperate forests, Argentina’s habitats are diverse. It is home to the hottest place in South America and shares the driest desert on Earth with Chile. From the Ground-Tyrant-rich slopes of the highest point in the Western Hemisphere, its scoliotic spine descends into the tubenose-rich waters of the Drake Passage, where the Andes sink below the Fuegian waves to re-emerge in Antarctica. 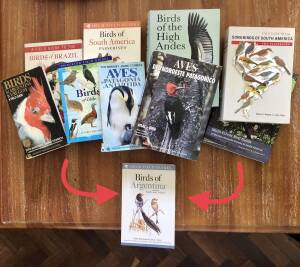 Before this publication, I relied on nine field guides for Argentina.

Eventually, the leather and parchment were replaced by Tito Narosky and Dario Yzurieta’s Birds of Argentina and Uruguay, which remained the staple for decades until now. For those who cut their teeth on the picture-matching, vision-centric style of Sibley’s guides, this book was tough. The ground doves, yellow-finches, and furnariids looked mostly identical or slightly drunk. And the succinct-but-apposite wisdom of the Spanish volume failed to make the linguistic leap to English. In short, it showed its age.

Inevitably, then, while guiding tours in Argentina, I often ran into independent birders on the trail. They lamented the lack of a good field guide as a deterrent for making a trip. Even Dutch and Swedish birders bringing their particularly pioneering mindsets were juggling between four or five different books.

I always wondered; could a decent bird book have a real impact on ecotourism and investment in the birding economy here?

I think so, and the answer is no longer a myth.

With that, the scene is set. Time to riffle.

First to leap off the page, perhaps surprisingly, are the range maps. For a static book map lacking animated computational wizardry, they are pure precision. They show not only isolated, putative, or relictual populations with highly granular color splodges the size of, say, Central Park, but also display altitudinal, phenological, and migratory timing far beyond the typical blue-and-yellow summering and wintering palettes. Austral migration, especially short-range movement, is still scientifically underexplored here. For overlapping, difficult, and taxonomically awkward clades—for example, the doraditos—these maps are invaluable. They also demystify some ostensibly similar regions; for example, the Mata Atlântica of Misiones Province is home not just to a homogenous Atlantic rainforest, similar to that of São Paulo, but also contains both Alto Paraná and ombrophilous Araucaria forests. The guide does well to distinguish the subtle shifts in avifauna within the small province and even smaller tracts of birding excellence. In fact, I’d stake my bird library on these 10 color palette range maps (along with five accompanying symbols) as breaking a field guide record.

Sticking with the visuals, the plates are some of the best I’ve seen for the continent. Despite reliance on four artists, they’re stylistically consistent, and the colors are on point. Species mimetically represent their living counterparts without overblowing stereotypical field marks, yet the images manage to capture gestalt and subtle plumage detail harmoniously. The only plates I found a little overly stylized are two devoted to crakes and rails.

But any book review has to point out a few foibles. First, sonograms are relegated to the back, and they are reserved for difficult or visually inseparable groups such as pipits. Perhaps barcodes linking to Xeno Canto or the Macaulay Library at the Cornell Lab of Ornithology could have been worked into the main text, as it has in some of the recent Lynx Edicions books. Or, instead of using valuable space attempting to transliterate songs into a hominid alphabet, which is rather traditionalist and has never worked particularly well, a visual sonogram, which birders are increasingly capable of interpreting, could have been substituted.

Second, the text is sparse. This is a natural side effect of switching to one volume, and it is something I’m sure the authors wrestled with during that lengthy gestation. So the pocketability has come with the sacrifice of some key behavioral cues like posture, wing and tail flicking, or canopy height foraging niches. Perhaps this is more grist for the mill of the excellent art, but I would have liked to have seen more jizz and behavioral pointers. To borrow a more familiar ABA analogy, some ages of Connecticut and Mourning warblers can look similar, but one walks and the other hops.

Overall, the foibles are as paltry as the eponymous tyrannulet, and the achievement is huge. I know the next time I’m back in Argentina, I’ll be eager to revive the serotonin of the beginner’s mind and put this guide to the test. Maybe I'll even correct some youthful misidentifications! In short, the world’s eighth-largest country has gone from a field guide void to the top of the Neotropical pile.

Now we await a deluge of birders! 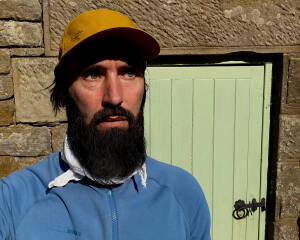 Dominic García-Hall owned and operated a birding tour company in Argentina back in the day when there were very few. He sold it to go sit in an office all day in New York City, but has since course corrected and now devotes most of his time to field recording, birding war zones, and forever editing a dawn chorus sound installation.