A Great New Entry to the Big Year Canon

A Great New Entry to the Big Year Canon

A review by Laura Keene

Falcon Freeway: A Big Year of Birding on a Budget, by Christian Hagenlocher Christian Hagenlocher started January 1, 2016 as most birders do. He went birding. What the 26-year-old didn’t realize that day were the forces that would intercede to direct his energies into an inspiring journey of fulfillment and adventure, ultimately breaking the existing ABA Area Big Year record with 752 species. In his book Falcon Freeway: A Big Year of Birding on a Budget, Christian provides a riveting account of his Big Year journey, detailing how his fascination with birds, triggered at a young age with a pair of nesting Peregrine Falcons at the Washington Mutual Tower in Seattle, led to the adventure of a lifetime.

If you’re expecting a book chronicling the historic 2016 Big Year competition, you will find little mention of it here. I am personally familiar with that competition, as one of the other three Big Year birders of that year vying for a place in the ABA record books. For the rest of us, the sense of rivalry was a powerful motivation, always present and insistent, though in a positive spirit for the most part. But in the pages of his book, you come to realize that Christian’s Big Year wasn’t about the race for the highest number, simply because that wasn’t his focus. His days were spent attempting to achieve a more meaningful experience, one connected to both the human side of birding and the avian side.

I began New Year’s Day that year chasing the same bird as Christian, the Redwing in Vancouver, British Columbia. However, we missed encountering each other by several hours. You’ll read in the book of Christian’s delays at the border; otherwise, we would have met straight off. We didn’t actually meet until several months later in Adak, prior to departing for Attu. He is a well-spoken but soft-speaking young man who seems too good to be true; but the more time you spend with him, the more you find that indeed, he is true. This natural virtue is reflected in his own telling of a unique Big Year experience.

Christian captures the beauty and magic of his wanderlust as we ride along with him in his trusty Subaru Outback, and see the ABA area through his eyes. While he details each experience through his keen observational skills, this it is not a book of “went there, saw that bird.” Instead, Christian recounts an innate connection with birding, the birding destinations, and the travels in between. His Big Year took him to the corners of the ABA area, as far south as the Dry Tortugas, to the northernmost point of the U. S. in Barrow, Alaska, out to the easternmost point of North America in Newfoundland, and to the extreme western end of the Aleutians, the island of Attu. Christian describes each experience in between with a fresh perspective and an elegant prose that will transport you there: “Ahead, an impenetrable wall of clouds sat draped over the Talkeetna mountains, the fresh snow spilling out onto the cold slopes below. The gray sun, obscured by snow-filled clouds…which created a patchwork of light on the distant mountainside. The vibrance of fall color animated the landscape, slowly relenting to the stillness of winter.”

His descriptions of the sites and environments is equal to that found in most novels, but I feel obliged to remind the reader that not only are these sites and experiences real, they’re within reach of most ABA members. Birders in particular are certain to revel in the shared experience, as I certainly did.

The author’s background as a teacher is evident and extends to an innate desire to involve others in his experiences. Shortly into his year, Christian decided to set goals, not just to see birds, but to find ways to make his year meaningful. He laid out some ideas, and came up with the acronym EPIC: Engage with the birding community and focus on the people he met and their stories, why they love birding; Preserve bird habitat in urban and rural areas; Inspire by sharing the nature he observed through social media and his Birding Project to encourage others to seek outdoor experiences; and Connect people to each other and to the birds. Christian interviewed 365 birders for The Birding Project, photographing the binoculars in their hands as talismans of their quests. Unlike any Big Year birder before him, he immersed himself not only in nature, but connected socially in each environment. I observed firsthand Christian’s singular talent for this in Gambell, Alaska, as he interviewed a tribe elder, taught classes at the local high school, and even danced at a tribal social.

The similarity of the name Falcon Freeway to Kenn Kauffman’s Kingbird Highway is no accident, since Christian credits Kenn’s experiences as a huge source of inspiration to begin this journey. Like Kenn, Christian’s travel logistics differed from many other Big Year birders, relying more on his own Subaru than air travel and rental cars. Living on a tight budget, often sleeping in Walmart parking lots and stocking up with food from his parents' pantry, Christian’s story is reminiscent of Jack Black’s character in the movie based on Mark Obmascik’s book The Big Year. In spite of this thrift, though, he was always quick to offer to share his ramen noodles and Welch’s fruit snacks to whomever he happened to be birding with. At the end of his book, Christian offers pages of tips for birding on a budget, car camping, and living on the road.

While the positive experiences are numerous, Christian also pulls no punches describing some of the difficulties, such as losing a job early in the year, extended stops by border patrol, and negative attitudes of others. Again, from first-hand observation, I can attest that Christian met every difficulty with grace and positive action, neither dwelling on the negatives nor letting them discourage him. On tough days when we were birding together and met a particular challenge, he could often buoy my spirits. He also supported my own Big Year in many ways, such as going with me to chase the Nutting’s Flycatcher at Arizona’s Bill Williams Wildlife Refuge, hiking many miles on scorching-hot July days so that I wouldn’t die there alone. Christian is exactly as he portrays himself in this book, and we’ve maintained a friendship to this day.

Anyone who loves birds, travel, or the idea of Big Year birding will enjoy Falcon Freeway. I think I speak for Christian when encouraging you, the reader, after finishing the book, to select at least one of the episodes he chronicles, and consider how you might seek out and share that experience for yourself. Christian finished the year breaking the existing Big Year record--749, set by Neil Hayward in 2013--and he was the youngest person to do so. Whether it will be his last record, he leaves to our imagination. 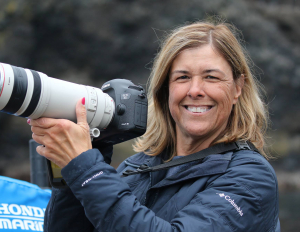 Laura Keene is a birder and photographer from Mason, Ohio. A clinical pharmacist by profession, in 2016 she followed her dream and did an ABA Big Year, in which she set a record of 792 species photographed. Laura is former Photo Editor of The Ohio Cardinal, and her wildlife photography has been published in diverse outlets.

I think this review is incomplete without mentioning the serious need for further editing. The end of the book was chock full of half-repeated sentences and typos. I enjoyed the book, but it could use some work.

Laura, I think this is a reasonable critique of the review–the book is self-published and self-published books almost always have a fair amount of errors.

Hopefully the author didn’t include some of the offensive language from his blog, such as when he refers to immigrants as “illegals”: http://www.thebirdingproject.com/blog/2016/5/8/southern-arizona

The description of his interaction at Starbucks isn’t much better.

Sorry Daniel, but there are definitions for persons who are in the country without legal permission from our sovereign nation. Many terms, sometimes derogatory, have been used since the 1840’s. “Illegals” may be the term ‘de jour’, but it is simply a description of status and not character. This year in both the Rio Grande Valley (March) and SE Arizona (June), I encountered enough “illegals” to dismiss plans to bird into darkness. Border Patrol presence was much less than in recent years. I do not like having to look over my shoulder for criminals when I am birding. This does… Read more »