Ode to an Unsung Ornithological Hero

Ode to an Unsung Ornithological Hero

A review by Julia Zarankin The last thing birders and nonbirders alike expect from James Bond is that Ian Fleming named the most famous spy in popular culture after the eponymous ornithologist. The real, earthly James Bond (1900-89) went by the name of Jim rather than 007 and made history (ornithologically speaking) with his groundbreaking Birds of the West Indies, first published in 1936, republished in at least eight editions, and considered the indispensable guide for the region until 1998. The life of the fairly reserved man devoted to birds of the Caribbean would forever change on February 17, 1952, when Ian Fleming decided to call his protagonist James Bond: From then on, the ornithologist unwittingly shared an identity with a fictional spy of irrepressible charm and questionable morals.

Jim Wright’s The Real James Bond is, in and of itself, a fantastic work of detective sleuthing that uncovers the unlikely connecting threads between the titan of spy fiction and the ornithologist whose field guide to the birds of the Caribbean became a “bible for birders visiting the region.” A slim volume, the book is a treasure-trove of information, curious anecdotes, photographs, meditations on the connection between birders and intelligence work, and even provides all the required geographic coordinates should an inquisitive reader wish to walk in the footsteps of both Ian Fleming and Jim Bond himself.

When searching for a name for his secret agent, Fleming “wanted a really quiet, flat name.” The former British naval intelligence officer had a property in Jamaica, which he named Goldeneye, Wright recounts, “not after the duck of the same name but after a plan [Fleming had] developed for the defense of Gibraltar during the war, and after one of his favorite books, Reflections in a Golden Eye, the 1941 novel by Carson McCullers.” And it was at Goldeneye—where he escaped London winters for 13 years and wrote his famous novels—that he kept James Bond’s Birds of the West Indies in a coveted spot on his bookshelf. In a New Yorker interview, Fleming said, “one of the bibles of my youth was Birds of the West Indies, by James Bond, a noted ornithologist, and when I was casting about for a name for my protagonist, I thought My God, that’s the dullest name I’ve ever heard, so I appropriated it. Now the dullest name in the world has become an exciting one.”

But more than anything the book is an ode to one of the unsung heroes of ornithology. As a conservationist, he raised awareness about Caribbean birds (and mammals) as well as their threatened populations, and brought “to life the magic of the todies, the lizard-cuckoos, the bullfinches, and some very fancy hummingbirds.” Bond’s contribution to scientific research also proved significant: In addition to his 150-plus scientific papers which continue to be cited widely, he proposed a zoogeographical theory that birds of the Caribbean were more closely related to North American, rather than South American, birds. This boundary—between the Lesser Antilles and Tobago—was later known as Bond’s Line.

Wright’s book also highlights Bond’s 100+ expeditions to the Caribbean over four decades, where he collected 290 of the 300 species from the region, and traveled to 50 islands and over 2,000 miles of water, in spite of violent seasickness. During a memorable two weeks in the Zapata Swamp in Cuba—where he subsisted on coffee and hutia (an 18-pound rodent) stew—he collected the memorable trifecta: Zapata Wren, Zapata Sparrow, and Zapata Rail. His birds ended up greatly enhancing the Caribbean specimen collection in the Academy of Natural Sciences in Philadelphia, adding 30 new species from Cuba alone. (As a side note, Bond’s connection to the enormous hutia rodent has been cemented: In 2015, the British scientist Samuel Turvey’s research team discovered the hutia in Haiti and named it in Bond’s honor, Plagiodontia aedium bondi.)

A fascinating chapter of the book deals with James Bond’s family history. The Bonds held a distinguished position in society: His mother was the cousin of John Singer Sargent, and his father worked as an investment banker and was part owner of the Philadelphia Phillies. Jim’s interest in natural history was likely passed down from his father who travelled to Venezuela on a three-month bird-collecting expedition for the Academy of Natural Sciences in 1911, and further ignited by one of his teachers at St. Paul’s School, the ornithologist Francis Beach White. James Bond’s contributions to ornithology extend beyond the Caribbean to Maine: With his uncle, the painter Carroll Sargent Tyson, he collaborated on a folio of the birds of Mt. Desert Island.

In 1961, when President John F. Kennedy listed Fleming’s From Russia With Love as one of his top ten favorite books in Life Magazine, Jim Bond found himself forever bound to his secret agent alter ego. In her book, To James Bond with Love, Mary Bond writes that young women started calling their house late at night, asking to speak to the sexy spy. In one conversation, Mary responded, with characteristic humor, “Yes James is here, but this is Pussy Galore, and he’s busy now.” She wrote to Ian Fleming that same year, and the latter responded by granting James Bond “unlimited use of the name Ian Fleming for any purpose he may think fit.”

The one and only meeting between James Bond and the man who stole his identity took place in 1964 at Ian Fleming’s famous Goldeneye estate in Jamaica and culminated in a signed first edition of You Only Live Twice: “To the real James Bond from the thief of his identity, Ian Fleming. Feb 5, 1964 (a great day!).” The meeting itself is recounted with a dose of humor. Bond confessed that his wife was the only spy-novel reader in the family, while he hadn’t read (and had no intention of reading) Fleming’s books himself, to which the latter replied that he didn’t blame him. Fleming even encouraged Bond’s wife, Mary, to write a book about her husband’s Caribbean adventures and said that “whatever he actually did outshines anything I’ve made my James Bond do.”

Mary Bond proceeded to do just that in Far Afield in the Caribbean. A novelist herself, Mary capitalized on the Bond-007 connection and published How 007 Got His Name, with the author’s name listed as Mrs. James Bond. All of this unwanted fame prevented the ornithologist from ever fully living life under the radar, as he had hoped to. Mary Bond turned out to be as great a publicist as they come. And the book inscribed to Bond from Fleming? After making appearances on the auction circuit, its whereabouts remain a mystery to this day.

Wright’s book is a delightful read. The few quibbles I had—in places, the reader will notice several repetitions—were overshadowed by the sheer wonder and unlikelihood of the subject matter, which provided me with endless factoid fodder that I can’t wait to share when small-talk will once again be possible (in a post-COVID world). Apart from the connection between James Bond and his unexpected espionage-identity, the book also reminds us that “birdwatcher is old British intelligence slang for a spy” and draws links between many ornithologists who also worked undercover (some more gruesomely than others). Wright even goes so far as to ask the question: Could Bond have been a spy? Very likely not, but Jim Wright’s book makes us realize that birders are in fact everywhere, especially where we least expect them. 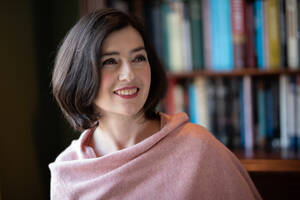 Julia Zarankin is a writer and lecturer to lifelong learners. She is the author of the memoir Field Notes from an Unintentional Birder, and her writing has appeared in magazines all over the U.S., Canada, and the U.K. A recent finalist for the Canadian Broadcasting Corporation's Short Story Prize (2020), Julia lives in Toronto, where she is trying desperately to get a better handle on shorebirds and is currently hard at work on a novel.