An Exciting New Resource for Bird Sounds of Southeast Arizona

An Exciting New Resource for Bird Sounds of Southeast Arizona

A review by Ken Blankenship 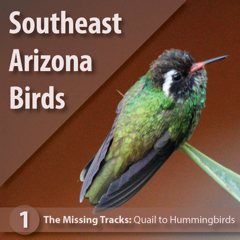 Editor's Note: The ABA thanks Ken Blankenship for his thoughtful and thorough review of Diana Doyle’s Southeast Arizona: The Missing Tracks. As we were going to press, Diana Doyle approached the ABA with an enticing offer: Rather than have her continue to individually host this free resource through DropBox, the ABA could host it on its website for all to access. We agreed, and thanks to the diligent work of Greg Neise, the ABA is proud to facilitate the dissemination of this exciting tool for learning less-widely-known bird vocalizations from a cherished birding hotspot: aba.org/seaz-tracks

We note that the portions of Ken Blankenship’s review focusing on the use of Dropbox are no longer current. This resource is not available through Dropbox. Birders who previously used Dropbox for The Missing Tracks have been notified of the switch in platforms, and no problems have been reported with the transition.

The ABA again thanks all involved for the culmination of this project: Diana Doyle for her attentive curation of these bird vocalizations and eagerness to share it with other birders, Ken Blankenship for bringing his expertise on Southeast Arizona birds and bird songs to bear in his excellent review, and the many birders whose uploaded recordings contributed to the project.

As a self-described “ear-birding addict” and professional birding guide, I have been obsessed with the study of avian vocalizations since I first took an interest in the pursuit and observation of birds. Just as with diagnostic field marks, I am fascinated by the idea that unique sounds which birds make can enable birders to identify the various species they are hearing. I was first gifted a cassette tape collection of the Peterson Audio Field Guide to Eastern Birds, which soon led me to order and devour a slew of CDs, from bulk collections of North American birds to region-specific sets. With the release of mobile apps like The Sibley Guide, Merlin, iBird, and others, I felt like I was able to immerse myself in the sounds of each and every bird species that might occur north of the Mexican border. But as my expertise increased—and especially after moving to Arizona to focus on the special birds of the borderlands—a pattern soon developed: There were gaps in nearly every mainstream collection of sounds when it came to local and rare birds of the Southwest, in particular those with extremely limited ranges in the U. S. or which occur only as vagrants but which are of great interest to North American birders.

Enter Southeast Arizona birder and audio recordist Diana Doyle and her new digital audio collection: Southeast Arizona Birds: The Missing Tracks. In a story similar to my own, Doyle had recently moved to Southeast Arizona’s unique birding region among the Sierra Madrean Sky Island mountains. Spending hours in the field, she too had noticed that many sounds of the region’s sought-after birds were missing from popular American birding apps. This ranged from regional dialects for common species like “Mexican” Bewick’s Wrens and Brown Creepers, to rare and local breeding species like the Rufous-capped Warbler and Sinaloa Wren, to mega-rarities such as the Eared Quetzal and Brown-backed Solitaire. Even more intriguing are species that have not yet been recorded north of the border and are missing entirely from mainstream apps but that may one day be detected in the U. S.: Rusty Sparrow, Scrub Euphonia, Mountain Trogon, and others. And so began Doyle’s personal project to bring together in one place a definitive collection of audio recordings of the specialty birds of Southeast Arizona and northern Sonora. Remembers Doyle, “I thought the project would simply remain isolated on my iPhone, but with the help of my high-tech husband, it’s now a packaged resource I can freely share with other birders.”

Indeed, this customized, 117-track, 75-species, five-disc digital collection is now available to the birding community as a free download using Dropbox, a cloud-based platform. More ecological than plastic-and-paper, and superior to a fixed digital asset where species and audio tracks can’t be updated over time, Doyle’s collection is cloud-based, while simultaneously offering offline options. By using the Dropbox app, the audio files, cover art, and PDFs are dynamically linked and can be used on any smartphone, tablet, laptop, or desktop operating system—online or offline. Dropbox provides a cross-platform, internet-safe way to manage, keep current, and transfer files as an album package. About one-quarter of the audio files are Doyle’s own personal recordings. The remaining three-quarters are from Xeno-Canto (xeno-canto.org), a crowdsourced database containing more than a half-million avian recordings. But instead of simply harvesting tracks from Xeno-Canto, each recording was singled out by quality and location, then edited using Audacity software to create clean, consistent, and succinct ten-second snippets for easy field identification and study. The album also can be downloaded to any smartphone for use in the field without a cellular or internet connection. Since the audio files are edited, each “disc” is only the size of a few high-resolution photos. The collection makes an excellent supplement to mainstream birding apps mentioned previously.

Let’s take a closer look. Here are some comments, both pros and cons, about Southeast Arizona: The Missing Tracks:

I’d like to close by noting that Southeast Arizona: The Missing Tracks is not the only app of its sort. If you find The Missing Tracks to be a helpful tool, you may also wish to download and explore Aves Vox (avesvox.app) intended for a broader (indeed a global) audience. Like The Missing Tracks, Aves Vox is a free app designed to allow users to study and download bird vocalizations that are directly sourced from the Xeno-Canto database—albeit not curated and edited for quality control. 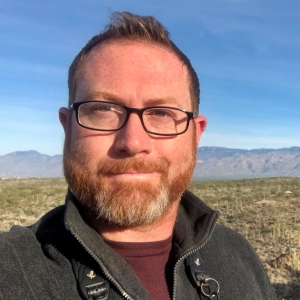 Ken Blankenship has spent nearly 20 years birding across the southern tier of the U. S. As owner and lead guide of East West Birding Tours, he has logged countless hours in the field studying Southeast Arizona’s specialty birds. Species identification via vocalization is his strongest suit.