New Atlas with Something for Everyone

New Atlas with Something for Everyone

A review by LeJay Graffious

The Second Atlas of Breeding Birds in West Virginia, edited by Richard S. Bailey and Casey B. Rucker My first impression of The Second Atlas of Breeding Birds in West Virginia was that this was a substantial tome with striking cover art by Julie Zickefoose. The Cerulean Warbler was a perfect choice for the cover, as was the artist. Editor Richard Bailey calls this blue avian gem the “poster child for West Virginia birds.” The forests of the Mountain State are home to more than a third of the world’s population of Cerulean Warblers. The West Virginia Division of Natural Resources selected the Cerulean as one of the state’s conservation priorities. With the state more than 70% forested, our homeland lies totally within the Appalachian Mountains region and is valuable habitat for eastern wood-warblers. Thus, the Cerulean Warbler becomes an umbrella species for our many songbirds when we protect and develop habitat for this azure songster. The book’s heft foretells the comprehensive review of West Virginia’s avian life contained within.

Flipping through the pages reveals a pleasing, refined layout design with near-full pages of bird photographs introducing the chapters, photographs highlighting each species account, easily understood maps and graphs, and numerous appendices. A deeper dive unveils the scope of the extensive assessment of avian life breeding in West Virginia. More than a mere coffee table book, this volume endeavors to stand as scientific reference material. An historical perspective on West Virginia birdlife, descriptions of the state’s ecoregions, the effects of land use on changing habitats, detailed material about each species, and information about population size, density, and changes are all found beneath Zickefoose’s gorgeous rendering.

Editors Bailey and Rucker led the challenge of building, expanding, and updating beyond the first atlas. They organized the 2009–2014 field work of over 100,000 records by nearly 200 volunteers under the supervision of regional coordinators. This data was reviewed, analyzed, and presented by another team of specialists. Regional experts began writing the chapters in 2013 to prepare for the 2020 publication. This work includes scores of photographs of landscapes, illustrative habitats, and birds, virtually all taken in West Virginia.

The editors set the stage in Chapter 1 with discussions on the purpose and goals of ornithological atlases, giving a historical perspective building on George A. Hall’s and Albert R. Buckelew Jr.’s The West Virginia Breeding Bird Atlas (1994) and Hall’s West Virginia Birds (1983). Chapter 2, “Geography and Climate,” gives context to our four ecoregions. West Virginia is the only state that lies solely within the Appalachian Mountains region. Its diverse topography and hydrography support northern species such as Nashville Warblers and Swainson’s Thrushes in the high Allegheny Mountains. Then, in the Cumberland Mountains, we find the northern limit of the more southerly Swainson’s Warblers’ breeding habitat.

The next chapter, “Habitats in a Changing Landscape,” presents a brief historical overview of how human activity has affected the natural environments within the state. Explanation of the basic habitats is presented to give perspective to the niche of each bird species. Forest types are explained and visualized with representative photographs. Figures are used to illustrate the location of various vegetative communities and percent change we have experienced. The importance of this section is to show how forest cover has changed over a century and a half, which gives context to fluctuations of bird populations. Notably, there was relatively little change in forest cover between the two atlases.

Chapter 4 provides survey design, field methods, and procedural guidelines for data entry and management. Bailey explains how special surveys were employed to address data deficiencies of targeted species. Integration of external data sources were used to create a more comprehensive summary of breeding birds in the Mountain State. The mathematical models used by Andrew M. Wilson are explained in Chapter 5. Wilson also provided analytical methods for the Ohio and Pennsylvania atlases, thus providing consistency among the breeding bird publications. The methodologies focus on accounting for biases within data collection methods. Where data was adequate, abundance analysis was completed on 62 species, yielding the first population estimates ever made in the state.

The species accounts in Chapter 8 comprise 66% of the book. The preceding chapter explains how consistency was maintained among the ten authors. Interesting and informative accounts of 170 species and two hybrids are presented. Each has an illustrative photograph, natural history synopsis, distribution description, a historical perspective, summary of the second atlas results, and population trends in the state and other state atlas projects. On the opposing page are maps and tables. Each species has its breeding evidence map and chart of the number of blocks detected. Where sufficient data exists, maps of estimated occurrence and estimated change are included along with a Breeding Bird Survey trend table. These summaries are punctuated with thought-provoking facts; for instance, 10% of the global population of Wood Thrushes breed in the Mountain State.

The last chapter highlights the role West Virginia plays in the conservation of forest-dwelling avian life. The authors detail how bird atlas work guides bird conservation. They stress the importance of federal and state agencies teaming with nongovernmental agencies, academic institutions, industry, and citizen-science groups to create a collaborative conservation effort to reverse the declines we are witnessing.

As a friend and contributor to The Second Atlas of Breeding Birds in West Virginia noted, “This atlas has something for everyone.” From the casual birder to the academic to those charged with developing budgets for conservation efforts, this atlas gives a foundation for strategic planning to slow or reverse population declines, and to conserve the avian fauna of the Mountain State. 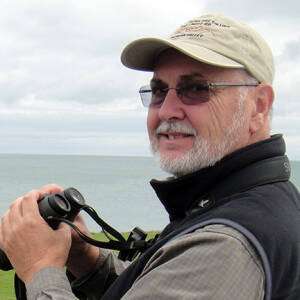 LeJay Graffious is a bird bander, ornithologist, and retired school principal. He is an active leader at Mountaineer Audubon, for which he has coordinated the CBC for 38 years and counting, and serves on the West Virginia Bird Records Committee. LeJay is an advocate for taking kids birding.