New England has one of the ABA Area’s richest birding histories, and that birding history is accompanied by a wealth of birding and environmental literary classics: Walden, The Outermost House, and A White Heron and Other Stories, among many others. Two new nonfiction titles join the ranks of the already formidable canon of New England bird and nature writing: John R. Nelson’s Flight Calls: Exploring Massachusetts through Birds and Robert Tougias’s Birder on Berry Lane: Three Acres, Twelve Months, Thousands of Birds.

In Flight Calls, Nelson, Professor Emeritus of English at North Shore Community College, writes in a series chapters reminiscent of reflective essays about his varied birding adventures and the birding life, including many of Massachusetts’s most famous birding sites like Cape Cod, Plum Island, and Mount Auburn Cemetery. Nelson’s home county of Essex and its excellent sea watching, along with its other migration highlights, are of course especially well represented. The richness of salt marsh birding is also explored.

The endearing nature of Nelson’s engagement with other literary works cannot be overstated. In one section he invokes Gilbert White’s Natural History and Antiquities of Selborne and soon after is engaging Milton’s Paradise Lost­. In another, he goes from The Faerie Queene to Moby-Dick to Origin of Species back to Moby-Dick in a span of just a few pages—all of these references are focused on the relevance of these works to birds and birding. Nelson’s literary and history knowledge and referencing is fun, upbeat, and even inspiring. Although the rapidity with which Nelson often cycles between famous books and poetry might seem dizzying or somehow not appropriate for a subject-matter like great works of literature, it works and is pleasurable in the same way an action-packed bird walk can be: No one is upset when a ton of good birds show up in rapid succession, even though the volume of birds may prevent one from savoring each sighting. Indeed, the way Nelson writes about literature is like a kind of birding of literature—a series of exciting but never totally predictable encounters with familiar works that is fun and addictive. And he does this while somehow also managing to tie in actual birding—a unique voice and style.

Interwoven with Nelson’s birding adventures throughout Massachusetts are occasional references to jaunts farther afield, usually Neotropical destinations like Guatemala and Belize. With humor and wisdom, Nelson is an amicable birding companion as well as an exhaustively well-read literary scholar: The immense breadth of books and poems he interweaves into his stories will be a delight for all environmental literature enthusiasts, especially to New England birders or anyone with an interest in the region. Birders who love any combination of personal essay, New England, environmental writing, and history will enjoy Flight Calls. 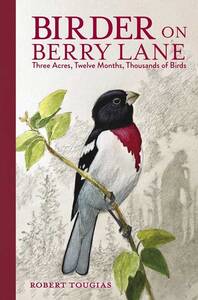 In Birder on Berry Lane, author Robert Tougias, based in southeastern Connecticut, takes readers on a tour of his three-acre woodlot yard as well as his neighborhood with caring insight and soothing prose, using the same month-by-month calendar progression of other nature writing classics like Rural Hours. This structure yields meditations on the months themselves: the anticipated weather changes of April, September’s odd identity as the month between summer and fall, the December anticipation of irruptive finches.

With care and contemplative attention, Tougias notes the details and day-to-day intricacies of bird life, exploring the paradoxically banal yet captivating implications of, for example, the lives of wintering American robins, which are often juveniles risking the harsher conditions for better breeding opportunities—how they choose territories, what kinds of trees they prefer to nest on, how to find those nests. Interspersed with bird observations are reflections on gardening, and in particular on how well the two activities blend together into almost a single pursuit.

While regular feeder visitors receive good attention—the resident finches, woodpeckers, and Blue Jays for instance—harder-to-find birds occupy space in the narrative as well: The author details his search for the resident Barred Owl as well as the walk he leads in search of newly arrived American Woodcocks performing their famous sky dance. One notes that the author seems to take equal pleasure in the joy of detecting elusive birds as he does in the regularity of common birds. This isn’t a fast-paced run-and-gun birding narrative; it’s about really being in a place and knowing as much as one can about not just that place, but about all the other beings that also live there.

Throughout the past year, many birders have redoubled their efforts to get to know the birds immediately around them. Tougias’s work is a good model for how to continue striving to fill in gaps of knowledge for the many birds that live among us, the obvious and the not-so-obvious. 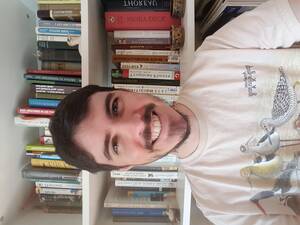 Frank Izaguirre is a PhD candidate in English at West Virginia University, where he is dissertating on the influence of field guides on environmental thinking. He edits the Book and Media Reviews column for Birding and recently began writing the biweekly column Birds and... for the ABA website.