A Unique U. K. Guide on Raptor Leftovers

A Unique U. K. Guide on Raptor Leftovers

A review by Melissa T. Yang

Raptor Prey Remains: A Guide to Identifying What’s Been Eaten by a Bird of Prey, by Ed Drewitt 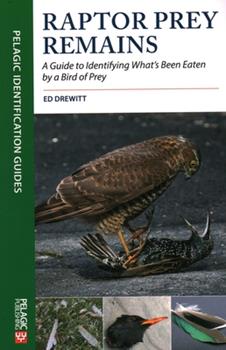 Ed Drewitt’s Raptor Prey Remains: A Guide to Identifying What’s Been Eaten by a Bird of Prey begs to be judged by its cover, where the intense yellow eyes of a Eurasian Sparrowhawk gaze into the throat of a European Starling pinned down and agape. Underneath, a grid of uncompromising images: the severed head of a Eurasian Blackbird is flanked by shots of loose feathers of more birds, all presumed dead and devoured.

When cameras catch moments in the natural world that humans might label as cruel, there is often a range of reactions from outrage to research and inquiry. The latter includes curious viewers like me who tend to tune in with heightened attention and rapt fascination, eager to examine the gory details and piece together full stories from gruesome scenes. The ideal audience for Raptor Prey Remains is certainly this crowd. In short, if you see this cover and think, I need this book, you might be right. If your inclination is to avert your eyes in disinterest or disgust, you may choose to opt out—or if you’re led to the text on a specific quest, it’ll suffice to limit your reading to the first few sections and reference specific entries as needed.

The author, Ed Drewitt, is a U. K.–based naturalist with years of experience leading walks and giving talks on ecological topics for a broad audience. Raptor Prey Remains is a logical follow-up to his 2014 guide to Urban Peregrines, another unique offering published with Pelagic. Drewitt’s enthusiasm and research into topics he so clearly cares about imbue his works with a distinct personality. His works consistently invite readers to contemplate the broader ecological roles of raptors. In focusing on remains here, Drewitt gestures to larger questions of how birds are interacting with other species, of how and where they feed. In a way, this new volume helps cultivate in readers a fuller appreciation of the connected elements of a bird-eat-bird world.

As a guide, the most educational features are front-loaded in the opening eighteen pages of Raptor Prey Remains, where Drewitt highlights the tricks of his trade for aspiring wildlife detectives. He notes that prey remains can reliably be found at roosts and breeding locations, and that steps should be taken to safely collect and study remains which “are likely to be bloody or maggoty” (down to reminders to use gloves and wash hands). There are legal caveats—since it is “legal to keep feathers and skulls of some species” in the U. K., Drewitt offers sources on figuring out which are fair game. It is worth noting that one of the limitations of this guide for ABA Area readers comes down to legal logistics, since the Migratory Bird Treaty Act prohibits the possession of feathers and bird parts without a permit in the U. S. and Canada.

Drewitt continues his introduction with a run-down of what clues common raptors leave behind by species, then a brief personal narrative demonstrating his lifelong care for the subject. Diagrams are provided to assist in feather type identification alongside a select anatomical glossary. After this reference-rich opening, Dewitt launches into photo-filled entries showcasing the remains of the prey.

All entries follow a similar pattern. For each prey bird featured, Drewitt presents the common and scientific name, a paragraph of physical description of frequently found remains (often all feathers) and a small image of the living bird in the upper-right corner. The brief introductory paragraphs each mention anatomical features and specific feathers. Beyond that, there are large visual spreads of specific parts of the animal pulled apart by a predator—many loose feathers, some freshly torn off heads and wings, some half-eaten and decaying carcasses, a few claws, skulls, and so on. Some images were taken at the messy scenes of feasts, while other artifacts were collected, cleaned, and set out with other elements for scale. Snapshots are provided by over sixty photographers, and as expected with this vast range, photographic quality varies a bit in clarity and composition. Image captions are brief and vary in descriptive depth.

Some entries offer more details and helpful hints with large images over several pages, while others are given one page. Most feature specific species, but the final few are dedicated to fledglings and then “other animals” as a broad category. The birds—or rather, the remains—profiled are based in the U. K., but plenty of the birds inhabit the ABA Area and are preyed upon by ABA Area raptors as well. Entries on such shared species include the Rock Dove, Barn Swallow, and House Sparrow, as well as species with closely related ABA equivalents, such as the Eurasian Coot and Common Snipe.

The balance struck between the words and the photographs is occasionally uneven; the spread of species selected and the depth of their profiles can seem eclectic. In the Whimbrel entry, the very specific “Half-eaten carcass in a car park (peregrine kill)” is juxtaposed with a rather generic “Feathers found on a hillside” caption. This is a scientific endeavor with poetic moments, such as a “Feathered foot in the heather” in the Red-legged Partridge entry. Most captions stick to visuals, but there are sensory exceptions, such as when the Manx Shearwater’s feathers are said to have a “fishy, musty smell” in addition to carrying a “finely dusted” appearance created by salt from the sea.

Since Drewitt is a collector of prey remains as well as photographs, this project sometimes feels like a conceptual art book of avian remains in addition to a functional guidebook. There is a quirkiness to its concept which recalls comedic guides such as Roger Knutson’s Flattened Fauna: A Field Guide to Common Animals of Roads, Streets, and Highways (1987) and whimsical projects of that ilk—a genre of gag gifts with surprising educational potential.

To its credit, this book is a step above in seriousness, and might be compared more closely with The Peterson Field Guide to North American Bird Nests, but with a grim twist. Especially inasmuch as it is “the first book to show in detail the actual parts of a bird” that has been preyed upon, Raptor Prey Remains serves as a “first and most important step in identifying a prey species…” As a first step, the book is indeed a helpful guide. Speaking as a casual collector of eccentric and eclectic field guides, I would love to see more volumes dedicated to prey remains across the globe. I hope Drewitt’s contribution, especially with its welcoming “you can do this, too” attitude and step-by-step instruction will inspire spinoffs in this vein.

The niche focus of this slim volume is both a gift and a limitation in that I often found myself craving more details, depth, and fuller answers to the questions on raptor-prey interactions suggested by the entries. Given its brevity, Raptor Prey Remains would work well as a companion piece with other texts that more fully delve into these topics. Nevertheless, Drewitt’s passion and knowledge are evident. His work sparks inquiry and offers insight into why raptor prey remains are worth contemplation along with concrete entries and methods to guide and ground findings. I consumed this cover to cover and would again happily recommend Raptor Prey Remains to any reader enticed by the title, and for all who relish in educational content in unusual forms. 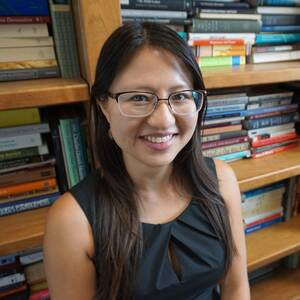 Melissa T. Yang teaches Writing Program courses themed around the environmental humanities at Emory University, where she serves as Writing Center Director. Melissa holds a Ph. D. in English (Composition and Rhetoric) from the University of Pittsburgh and enjoys researching birds through literal and figurative lenses.