A review by Julia Zarankin

The Bird Way: A New Look at How Birds Talk, Work, Play, Parent, and Think, by Jennifer Ackerman 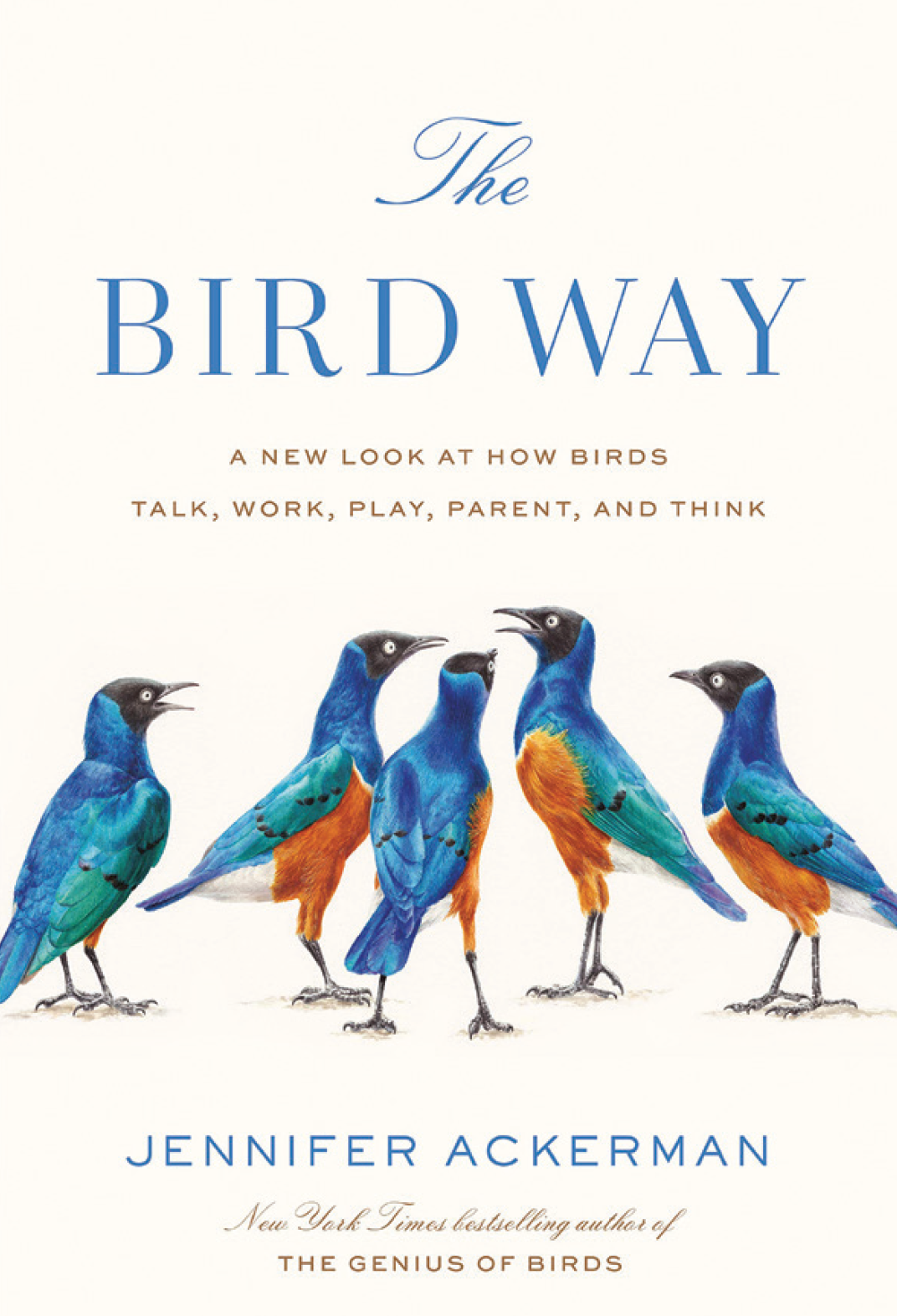 Roger Tory Peterson famously said, about birds, that the more you see, the more you want to see. And to that I would add that the more you learn about the formidable lives of birds—their perilous migratory journeys, their uncanny abilities and often-bizarre habits, their resilience—the more you want to understand them. In her new book, The Bird Way, Jennifer Ackerman takes the reader on an exhilarating quest to unravel the mysteries behind bird behavior and, more audaciously, to debunk conventional wisdom of what constitutes “normal” ways of being for birds.

In fact, if there’s one thing Ackerman’s illuminating book makes clear, it’s that there is no single way to be a bird. Her opus is a celebration of the sheer diversity of avian behaviors, practices, predilections and the birds she writes about are “iconoclasts and rule breakers” and remain “layered in mystery.” It is this decision to focus on birds’ idiosyncrasies, to resist generalizations and categorizations, to break down assumptions about bird behavior, and to show how “individual birds are every bit as distinctive as we humans are” that make this book so remarkable.

In spite of the fact that Ackerman has spent her whole life studying birds, her sense of wonder is palpable and propels the narrative. But this amazement and exuberance doesn’t come at the expense of science: Ackerman’s book is a paean to the researchers who study birds and the ingenious lengths they go to understand them. More than anything, The Bird Way shows us how for the invested birder and scientist alike, the learning never stops.

Ackerman’s book won’t just make you smarter—although the sheer number of astonishing avian factoids will surely put you in an enviable position at any cocktail party. But the book reaches beyond avian curiosity by presenting science as an ever-evolving conversation that constantly strives to move beyond its biases: In the case of ornithology, Ackerman shows us the benefits of questioning, resisting, and debunking geographic, human sensory, and gender biases. In other words, Northern Hemisphere birds no longer belong at the center of avian behavior studies, bird senses shouldn’t be measured against human ones, and the long-neglected study of female birds offers a wealth of information.

Divided into five parts to investigate the way birds talk, work, play, love, and parent, The Bird Way acquaints readers with complex and sophisticated avian intelligence. Bird cognition, perception, mental agility, and problem solving are at the center of Ackerman’s investigation. And what we come to realize is that birds and humans have more in common than we formerly believed. Songbird vocalizations turn out to have local dialects, Canebrake Wens engage in a form of cultural learning, and birds who sing in duets actually manage to synchronize their brains to intone as one. Not only that, but birds eavesdrop in order to learn alarm calls and the mobbing alarm call of the Black-capped Chickadee—the familiar chickadee-dee-dee—turns out to be a sophisticated display of intelligence, since the number of “dees” birds sing contains a coded message about the distance, size, and danger of the predator. Ackerman shows the extent to which bird cognition has been underestimated by scientists. That birds are masters of mimicry, lying, impersonation, shams, and bluffs—such as the Piping Plover’s ruse of faking a broken wing to distract predators from a nest—denotes serious brain power.

Ackerman doesn’t shy away from the less savory bird habits. Her description of vulture habits is, admittedly, unappetizing—they have “a penchant for peeing on their own legs to cool themselves on hot days, vomiting their entire stomach contents when they’re under attack, and most of all, shoving those homely, featherless heads deep into the gore of a carcass to feed on its soft tissues, its eyes, mouth and anus.” But what initially seems a repulsive habit to the untrained eye turns out to be a superpower that makes vultures “nature’s sanitary workers,” since their consumption of fresh carrion offers a “quick, competent cleanup and recycling of dead creatures.” And what is even more miraculous, “their guts are acidic enough to destroy the agents of disease, such as cholera and anthrax, so there’s little risk of spreading contamination from an infected carcass.”

Avian intelligence and acute perception are especially on display in the creation of tools. Not only can New Caledonian crows make hook tools, but they can also “create tools by combining two or more elements—a feat so far seen only in humans and great apes.” Where we might have thought that the ability to manipulate fire was exclusively the domain of humans, Ackerman shows us that Black Kites and Brown Falcons are known to pick up burning sticks and throw them deliberately to start fires. At every turn, Ackerman’s book forces the reader to reassess our preconceived notions.

While we may have thought that every behavior a bird displays is motivated by survival, research about the way birds play for the sole purpose of pleasure is illuminating. When Kea, birds known as the clowns of the mountains, play—much like rambunctious toddlers—it’s for fun: “It’s not about food or sex. It’s about play.” And their intense warble calls and high-pitched squeals resemble “infectious giggling of close friends.” Ackerman shows us how bird play also, amazingly, relates closely to emotional intelligence usually assumed to be the domain of humans. When studying ravens, researchers noticed that when one raven played, others wanted to join in the fun and the mood turned out to be contagious. It turns out that such “emotional contagion, whether positive or negative, is considered a building block of empathy.” Not only do birds feel emotions, but their responses are closer to ours than we might have imagined.

And when it comes to sexual practices among birds, versatility, variety, and purpose are as complex and diverse as they are in humans. Bird sex is not without its peculiar proclivities: The excursus into Davian behavior, a more palatable term for necrophilia, practiced among penguins and (same-sex) mallards is, frankly, not something I could have imagined.

What makes Ackerman’s book a joy to read is not just the stories she tells, but her vivid writing style. Hummingbirds and swifts don’t simply fly, they’re “avian acrobats”; the pied butcherbirds are the “Sweeney Todds of the bird world” who perform “dastardly deeds—skewering small birds and other animals for dinner—but they sing like seraphim”; the formidable mimicry of the lyrebirds makes them “archivists of soundscapes.” The description of a grouse lek read like poetry: “the grouse strut around with spiked tails spread fanlike, bright white chest feathers puffed out, yellow esophageal air sacs engorged, circling each other like boxers and filling the air with strange swishing sounds.”

That Ackerman quotes E.O. Wilson’s words early on is significant, and they stand as a mantra for the book: “When you have seen one bird, you have not seen them all.” The book is a testament to recognizing and saluting avian diversity in all of its forms. But above all, Ackerman relishes the pursuit of knowledge and the possibilities it uncovers: The more you learn about birds, the more they promise to astonish you. 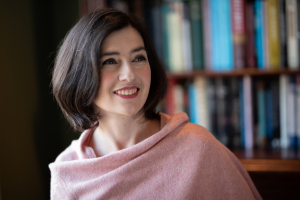 Julia Zarankin is a writer and lecturer to lifelong learners. She is the author of the memoir Field Notes from an Unintentional Birder, and her writing has appeared in magazines all over the US, Canada and the UK. A recent finalist for the CBC Short Story prize (2020), Julia lives in Toronto, is trying desperately to get a better handle on shorebirds, and is currently hard at work on a novel.