The Dazzling Science of the Evolution of Birds

The Dazzling Science of the Evolution of Birds

A review by Lan-Nhi Phung

How Birds Evolve: What Science Reveals about Their Origin, Lives, and Diversity, by Douglas J. Futuyma In his new book, How Birds Evolve: What Science Reveals About Their Origins, Lives, and Diversity, Douglas J. Futuyma switches gears from writing textbooks to writing for the public, helping demystify the complexity of bird evolution.

Futuyma is a renowned ecologist and evolutionary biologist, though, as he specifically mentions, he's not an ornithologist but a birder. The marriage of his expertise and hobby produces a unique perspective that satisfies audiences who seek technical knowledge and see birds as a scientific device as well as those who appreciate birds just for what they are (but let’s be real: many of us are both). Throughout the book, very “birder” concerns, such as why taxonomy changes so much with splits and lumps, are neatly coupled with the scientific reasons for those changes. Futuyma points out that this is just how science works—though it’s inconvenient at times to have to change your life list, it’s necessary to stay true to our understanding of species’ natural history. Affirming how confusing speciation is and how sometimes even biologists don’t agree on great scientific grounds, he justifies the ever-changing state of taxonomy.

One of my favorite things about the book is how Futuyma genuinely explains big and jargony concepts of evolutionary biology in relatively lay terms, accompanied by graphs and visuals to aid the reader. There is indeed no way around understanding the field without understanding notoriously abstract concepts like “biological species concept” or “genetic hitchhiking,” so he gives ample examples to make up for the jargon. He offers crash courses whenever warranted, notably about DNA, the molecular clock, and various genomic concepts. Even as a student of evolutionary biology who (should be) familiar with this jargon, I found it refreshing to review them—sometimes you internalize and accept something as a fact and no longer retain an explanation for it, which makes it hard to reiterate to someone who wants to learn. Futuyma circumvents this difficulty effortlessly and makes the book more centralized by not requiring much prior knowledge from readers.

Many usually misunderstood concepts are clarified—for example, “the survival of the fittest” aspect of natural selection is occasionally taken out of context, and therefore organisms are assigned a certain agency they don’t possess. Futuyma debunks this notion repeatedly, saying that it is simply a process of random frequency fluctuation of alleles (that is, different versions of the same gene) in a population. Organisms don’t have a “need” to adapt or survive and therefore cannot “change themselves” within one generation for this purpose. Moreover, this random process has no agency in changing a trait or evolving for the sole purpose of a species surviving extinction—some individuals just have the allele that helps them along better than others, which makes the allele more likely to be passed on to the next generation.

Futuyma cites Darwin a lot, and I suspect that this deep understanding of Darwin’s ideas and philosophy transferred into how the book was being written as well. The formula of introducing concept → defining concept → presenting multiple examples of concept in this work is very Darwinian. Futuyma doesn’t assume that readers will be persuaded by what is said, nor does he simply tell readers the conclusion—he shows the evidence and the process of scientific deliberation used by professional biologists, walking readers step by step through how such conclusions are made. Convergent evolution, for instance, is explained by how some aquatic birds evolved webbed feet but others have lobed toes instead; therefore, it’s likely that these species evolved to adapt to the environment, but were not picky about how. Sometimes that means different lineages ended up with the same feature, though they got it independently from each other; other times, another adaptation will evolve instead, as long as it was helpful to adapt to the environment they were in.

There is a specific analogy about a “helping” allele being passed on and self-perpetuating the tendency to help blood relatives rear offspring, and, though the beneficial “why” of this tendency seems to be clear via behavior studies, the “how” is quite murky. This is possibly my only criticism of the book—I wish this analogy was not made in terms of mutation and allele, because it can give the impression that there is such a gene or genotype that can explain this specific behavior. It seems out of place compared to the rest of the book, which repeatedly shows that mechanisms of evolution are much more nuanced than that.

Futuyma expresses cautious optimism in his discussion of conservation, climate change, and whether evolution as a process can save birds. Though it is possible for species to adapt, some adaptations are less feasible than others due to the time needed for such adaptations to influence the evolutionary trajectory of a species and save them from extinction. The most common response to change of environment due to climate change is “following” the preferred climate niche, and as a result shifting species’ distribution, typically northward and upward to get to a cooler climate (niche tracking). This tendency of shifting instead of adapting might mean that extinction will depend on the species’ ability to reach their desired destination—it will be harder to avoid extinction if you’re not really used to migrating (internal reason) or if the way there is blocked by rivers, mountains, or inhabitable agricultural land (external reason).

If you often find yourself going down a Wikipedia rabbit hole in your spare time, you would like the setup of this book. The flow of knowledge is extensive and organized, yet not daunting. Don’t get me wrong—this is not a “casual” read by any means. It’s hefty, but the seamless storytelling makes it not so dense that reading it is laborious. Though not without some anthropogenic language, I appreciate that sometimes anthropomorphizing can help readers connect better to the topic. Peppered with a delightful digression of stories the author couldn’t help but tell, this book is as approachable as evolutionary biology can get. 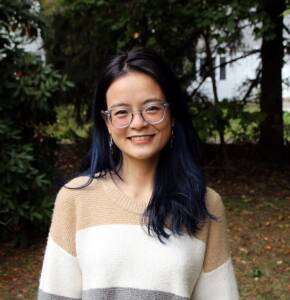 Lan-Nhi Phung is a biologist studying evolution and biogeography of North American birds. Born and raised in Hanoi, Vietnam, she is currently pursuing a Ph.D. in Biology at Penn State University. Driven by her passion for science communication, Lan-Nhi enjoys talking about biology and is an advocate for making ornithology/biology more equitable and accessible.