Monograph for the Mysterious Ring Ouzel

Monograph for the Mysterious Ring Ouzel

A review by Stephen Moss

The Ring Ouzel: A View from the North York Moors, by Vic Fairbrother and Ken Hutchinson 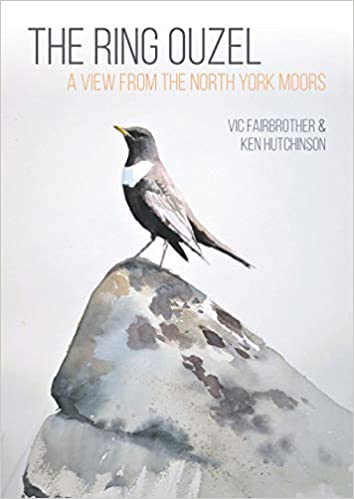 For most British birders, the Ring Ouzel is a creature of mystery. We may glimpse it on spring or autumn migration, perched on a thorn bush or feeding on ripe berries. Otherwise, we must venture into the hills and mountains where it breeds—mostly in northern England and Scotland. There we can watch this cousin of the more familiar blackbird where it belongs, in what passes for wilderness in this crowded land.

The subtitle of this book, A View from the North York Moors, sets out the stall of the authors, both of whom are clearly passionate not only about Ring Ouzels, but also the places where they live. The North York Moors is one of the least populated and at times bleakest parts of Britain; yet there is a strange beauty in these wide-open spaces—and plenty of wildlife, if you know where to look.

And Fairbrother and Hutchinson certainly do. This book is the result of 20 years of intensive fieldwork by these two men, working in the fine tradition of amateur naturalists, a lineage going back beyond even Gilbert White, to 16th- and 17th-century pioneers such as William Turner and John Ray. The result of their efforts is this well-produced book, which is hugely enhanced by delightful illustrations by artist Jonathan Pomroy, who beautifully captures the animated nature of his subject.

The story begins during the last decade of the 20th century, when a small group of Ring Ouzel enthusiasts got together, fired up both by their passion for this charismatic thrush and fears that it might be suffering a potentially terminal decline. The U. K. Ring Ouzel Study Group first met in early 1998, and has continued to work tirelessly ever since to improve the lot of the species.

They were not the first to do so. The late Ian Appleyard, another Yorkshire resident who led an extraordinary life as a champion rally driver and Olympic skier, published his own study, Ring Ouzels of the Yorkshire Dales, in 1994, just four years before his death. The authors of this current study warmly acknowledge their debt to Appleyard and his wife, Philippa, and have built on their work to gain an even deeper understanding of the species’ breeding behavior.

It is ironic that the Ring Ouzel should be the subject of, not just one, but two detailed monographs, for this remains one of Britain’s most enigmatic and—at least until now—least known breeding species.

A now-obsolete Yorkshire folk name for the Ring Ouzel was the “fell blackbird”—fell being a word for the slopes of hills, or a stretch of high moorland—the Ring Ouzel’s preferred habitat. The species is also sometimes called the “mountain blackbird,” and indeed, ecologically speaking, the Ring Ouzel is the upland equivalent of the Eurasian Blackbird.

The name “ouzel” (or as it sometimes spelt, “ousel”) has the same root as the German “amsel” (blackbird). It originally referred to the more familiar species, as in these lines from Shakespeare’s A Midsummer Night’s Dream: “The Woosell cocke, so blacke of hew, with orange-tawny bill…”

At first sight, Ring Ouzels resemble blackbirds, too. But whereas the male blackbird is, as its name indicates, all-black in plumage, the Ring Ouzel has pale wing-markings, a yellowish bill and—in the adult male—a distinctive white crescent, or “ring,” across the chest that gives the species its name.

Apart from their habitat preferences, the most obvious difference between the Ring Ouzel and the blackbird is numbers. After the Eurasian Wren and European Robin, and alongside the Common Chaffinch, the Eurasian Blackbird is tied for the third commonest breeding bird in Britain, with an estimated 5.1 million breeding pairs. There are now as few as 5,300 pairs of Ring Ouzels in Britain—roughly 1,000 times fewer than their common relative.

Range-wise, too, while the blackbird is found in 96% of 10-kilometer squares in Britain and Ireland, the Ring Ouzel is found in just 12%. Even this may be an overestimate, given that many birds recorded in April or May might be passage migrants rather than breeders. In any event, Ring Ouzel numbers have dropped by well over half since the very first Atlas of Breeding Birds in Britain and Ireland, whose fieldwork was carried out from 1968 to 1972, while the species’ range has shrunk by almost 50% during the same period.

So, can this long-term, in-depth study elucidate why Ring Ouzels are in such a steep decline, and even help to reverse the loss? The authors have certainly left no stone unturned in their attempts to do so. I have read few more thorough and detailed monographs than this.

Fairbrother and Hutchinson begin with a brief but full description of the species and its status, and then take us through a brief history of Ring Ouzel studies in the North York Moors and elsewhere. The central section of the book is a step-by-step account of the Ring Ouzel’s year, starting with its arrival on breeding territories in early spring; the species is one of the first to return to the U. K. each spring. There is treatment of the whole of the bird’s breeding behavior, plus chapters on predation, food and feeding, and communication.

One of the reasons Ring Ouzels arrive back so early is that they do not, like the majority of our spring migrants, winter in sub-Saharan Africa, but instead head to Spain and the Atlas Mountains of North Africa, where I have watched them feeding on juniper berries in the late winter sunshine. The chapter on migration is especially fascinating, pointing out that many of the birds we see in southern Britain in autumn are probably of Scandinavian origin, as 69% of fall migrating Ring Ouzels studied between 1976 and 1989 were found after October 8 and all British breeders are believed to have left by the end of September.

The final section of the book includes a timely chapter on the impact of human beings on the Ring Ouzel. It does not make comfortable reading: From grouse shooting to fell-walking, sheep farming to rock climbing, and climate change to hunting around the Mediterranean, we appear to be having a major impact on the fate of this beautiful thrush. Yet the authors remain hopeful, and if the Ring Ouzel is to survive, this book will certainly have helped it to do so.

In a world where we increasingly focus on the superficial, the quick and easy, and demand immediate gratification, Vic Fairbrother and Ken Hutchinson have shown us the importance of spending real time and effort studying a single species, and placing one bird at the center of their and our lives. The result is this fine monograph, which can take pride in its place in the long tradition of studies of a single species of bird. 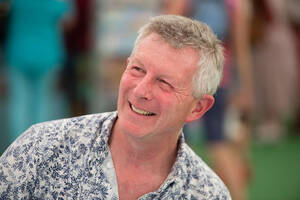 Stephen Moss is a naturalist and author based in Somerset, England. His many books on birds and wildlife include Mrs. Moreau's Warbler: How Birds Got Their Names (Guardian Faber) and "biographies" of the Robin, Wren, and Swallow (Square Peg). Stephen is currently at work on Ten Birds that Changed the World (Faber).