Essays on Birds, Conservation, and More by a Prominent Contemporary Novelist

Essays on Birds, Conservation, and More by a Prominent Contemporary Novelist

A review by Robert O. Paxton 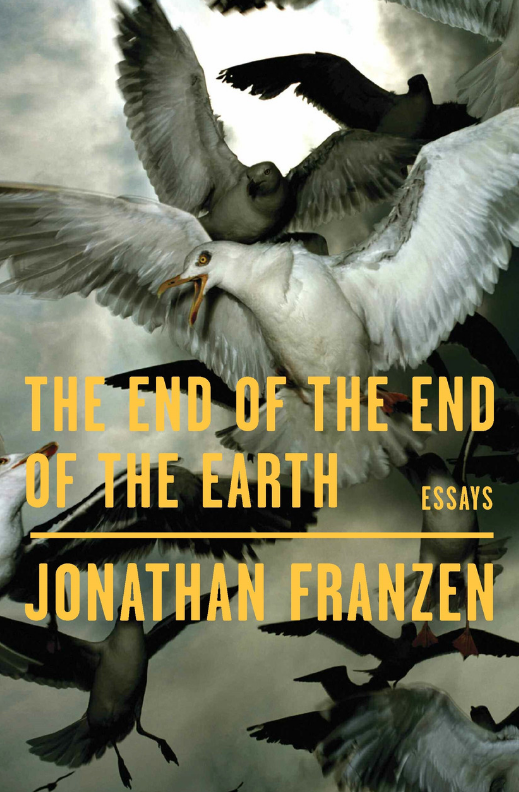 Jonathan Franzen has published five novels, four works of non-fiction, and numerous short stories in The New Yorker and elsewhere. He won the National Book Award for Fiction for The Corrections (2001), which was also a finalist for a Pulitzer Prize in Fiction. After the publication of Freedom (2010), his face appeared on the cover of Time magazine as a “Great American Novelist.” Franzen has become a highly visible and somewhat curmudgeonly presence on television talk shows like The Oprah Winfrey Show. This high-octane day job has not prevented Franzen from being a birder very much like the rest of us, the “real, avid, smitten thing,” as he puts it in these essays. “Seeing new bird species was the only activity that I could absolutely count on not to bore me,” he wrote in the title essay of an earlier essay collection, Farther Away.

A successful novelist may be no better than the rest of us at finding and identifying birds, but we can expect him to write about these activities better than the rest of us. In “Missing,” a wry travel yarn, Franzen sets out to find all the endemics on Jamaica and Saint Lucia, and doesn’t quite make it. His efforts will sound familiar to anyone who has visited difficult countries, experienced jubilation and dejection as life birds are found or missed, and coped with pre-dawn awakenings, rainfall, dodgy local guides, and rapidly expiring time.

Franzen admits “to my shame [at being] what people in the world of birding call a lister.” He seeks birds “to experience their beauty and diversity, learn more about their behavior and the ecosystems they belong to, and take long, attentive walks in new places. But I also keep way too many lists.” He defends listing as a device for setting goals. “It is a way of energizing yourself for an experience that often entails unpleasantness.” He doesn’t reveal any of his numbers in these essays, but in an interview with Jason Ward in July 2019 he claimed a world life list of about 4,600.

Nor does he explain in these essays how he came to birding. Somewhat atypically, Franzen began late, at around forty, in 1999. In a 2013 interview in National Geographic, he mentioned examining a flicker closely in the days following his mother’s death, and of becoming aware of the nuances in the plumage of a towhee in a girlfriend’s yard. But it was the spectacle of spring migration in New York City’s Central Park that set off a true passion.

Like most of us, Franzen finds it hard to say exactly why birds give him an emotional charge. In the essay “Farther Away," from his previous essay collection, when his friend the novelist David Foster Wallace reacts to a telescope view of a Long-billed Curlew with a dismissive “Yeah, it’s pretty,” Franzen knows that no spark has passed. His various explanations of the fascination of birds—the extraordinary diversity of bird plumages and behaviors, birds’ role as our best contact with nature in “a world now largely overrun by human beings and still beautifully indifferent to us,” the ability to escape one’s own shortcomings in the “radical otherness of birds”—come across as rationalizations after the fact. In the last analysis, the “enduringly transcendent delight” of seeing a rare bird, as he puts it in “Farther Away,” has no justification other than itself.

Jonathan Franzen is too thoughtful a birder just to love them, list them, and leave them, however. Some of the most effective, if painful, essays in this book concern the destruction of bird life and the urgency of conservation. As an eyewitness to an “epic extinction event,” Franzen wants to engage public opinion. “May Your Life Be Ruined” describes the sickening and indiscriminate netting and shooting of migrant birds in some Mediterranean countries like Egypt, Italy, and Albania. In these countries young men are initiated into adult male society by killing every migrant bird they can. A similar essay appeared as “The Ugly Mediterranean” in Farther Away.

Another compelling essay, “Invisible Losses,” explores the decline of seabird populations by 70% in the last sixty years, a larger percentage of loss than for any other comparable group. Yet this catastrophe remains almost unknown, Franzen laments, because these species breed unobserved on remote islands. Both of the main offshore fishing techniques—trawling and long lines—are major culprits. Trawling entraps feeding seabirds in nets, while long lines attract them to baited hooks and then drag them under. New techniques make it possible to reduce the by-catch of birds from both of these fishing techniques, and the South African government has successfully adopted them. But the situation remains “atrocious” as other countries like Taiwan and China continue to use harmful industrial fishing techniques without any effort at mitigation.

The leading threat to seabirds is introduced predators—such as rats, mice, and cats—on the breeding islands. Having evolved without terrestrial predators, seabirds are utterly incapable of protecting their eggs and young from these aggressive carnivores. This subject provides another round of painful though necessary reading. The way mice kill albatross chicks much larger than themselves will keep you awake. Achievable solutions exist for the introduced predator problem, but they require long and costly extermination efforts. A particularly ambitious program of rodent eradication has been applied to the major bird breeding island of South Georgia, in the South Atlantic. Others are planned for islands off South Africa and California. Much of this information was new to this reviewer, and probably will also be new to most landlubber birders. It should not be missed.

A birding novelist is as likely to observe the observers as well as the birds. Sometimes Franzen scrutinizes himself, uncharitably, as an “angry bird-loving misfit who thinks he is smarter than the crowd.” He recalls himself as a young man “under the spell of my elite college education” envisioning “overthrowing the capitalist political economy in the near future through the application of literary theory.”

Franzen has strong opinions and no hesitation about voicing them. Ecotourism, he thinks, may be the best way around the economic pressures that destroy bird habitat. But he is unable to summon much affection for the ecotourists, “Americans who live far from the ecological damage that their consumption habits cause.” Or for the African parks where “tourists, most of them white, all of them affluent,” can “experience” an “Africa” that is actually a simulacrum maintained by their money, carefully screened from the “overgrazed, overpopulated trash-strewn countrysides” that lie just outside.

Though he has no doubt about the reality of climate change and the centrality of human activity among its causes, he prefers local mud-on-the-boots conservation projects that safeguard specific habitats and species to vast planetary projects, such as to trying to reduce the emission of greenhouse gases. He fears that climate change is already a done deal, and that concentrating upon it, as he accuses the National Audubon Society of doing, deflects effort from more immediately urgent local actions. “Not one single bird death could be directly attributed to human carbon emissions.” Instead, “the most serious threats to American birds [are] habitat loss and cats.”

The National Audubon Society, Franzen asserts, “once an uncompromising defender of birds, is now a lethargic institution with a very large PR department.” This reviewer won’t disagree, having watched with dismay as National Audubon tried to kill the magazine American Birds, not simply by stopping its publication but also by arbitrarily retaining copyright to its name. The need to give a slightly clumsier new name, North American Birds, to this valuable guide to changing bird numbers and distribution burdened the American Birding Association’s laudable revival of it.

Climate change may indeed impact entire species of birds more directly than Franzen admits. Consider the Bicknell’s Thrush, whose habitat in the U. S., limited to mountaintops in New York and New England, is being squeezed upward as average temperatures rise. These birds may simply run out of space as they try to move upslope. Franzen’s own account of visiting Antarctica—subject of the title essay, “The End of the End of the Earth”—warns of a mammoth climate-change crisis in this “last substantially intact marine ecosystem” as rising seawater temperatures upset the entire biological association based on krill.

In the essay “Save What You Love,” Franzen advocates conservation projects that offer immediate help. They address specific habitats on a scale large enough to involve a full complement of species. They involve the local human inhabitants, who find work and see improvement in their lives. They are not simply entertainment for wealthy American birding tourists. The “most audacious and successful conservation project” Franzen knows is the habitat reconstruction activity of Dr. Daniel Janzen, of the University of Pennsylvania, in the Guanacaste province of Costa Rica’s Pacific slope. Over many years Dr. Janzen has painstakingly nurtured new tropical forest in exhausted pastureland, a delicate task that got results sooner than he expected.

It is the nature of collections of essays to range across varied subjects. Many essays in The End of the End of the Earth are not about birds. There are personal reminiscences and reflections on the American novelists Edith Wharton and David Foster Wallace, the photographer Sarah Stolfa, and even an essay on the essay form.

Franzen’s birding life intersects with his literary life only occasionally. Just one novel, Freedom, involves birding. A plan to create a Cerulean Warbler reserve figures in the plot, and a Cerulean Warbler appears on the cover. Also Rule #7 among the “Ten Rules for the Novelist” published in this volume, sounds more useful for birders than for novelists: “You see more sitting still than chasing after.”

Some of Franzen’s most interesting birding essays do not appear in this collection. An account of birding in China, originally published as “The Chinese Puffin” in The New Yorker in April 2008, is reprinted in Farther Away. Yes, there are birders in China, as we know from the March–April 2006 and July–August 2013 issues of Birding. Franzen’s birding adventures in China leave one wondering whether to laugh or cry, and reveal a lot about that country’s breakneck transformation. The title essay in Farther Away recounts Franzen’s harrowing solo expedition to the island of Masafuera, far off Chile, and his failure to see the Masafuera Rayadito, related to, of all things, the forest-loving woodcreepers and antbirds. His struggle to find the bird—and, indeed, to survive—is incidental to this article’s main concerns with solitude and the capacity to accept falling short.

It’s too bad that Franzen’s birding essays haven’t been gathered in a single volume. They are fresh, unsentimental, by turns passionate or funny, opinionated (a word he uses about himself), and strongly personal. There is not a dull line in them. 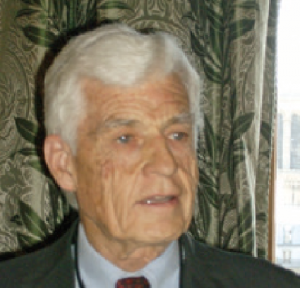 Robert O. Paxton began birding at nine. Bob has served as regional editor for North American Birds magazine and its predecessors since 1963, first in California and since 1975 in New York. As Professor of History at Columbia University in New York, his scholarly work focused on Vichy France and fascism in Europe.