A Spectrogram Is Worth a Thousand Words

A Spectrogram Is Worth a Thousand Words

A review by Lauryn Benedict Full disclosure: I’m a spectrogram junkie. What, you may ask, is a spectrogram? It’s a way of visualizing sound. By applying algorithms with sophisticated names like “fast Fourier transform” to audio files, one can produce an image that represents a sound. Why might we want to do this? Human ears are reasonably good at discerning changes in sound timing and pitch, but for most of us, they’re not great. I can’t listen to the trill of a Dark-eyed Junco and make out how many times the base note was repeated. Nor can I tell exactly how wide a frequency sweep the Brown-headed Cowbird produces. But when I examine these sounds on a spectrogram, I see all that and more. Spectrograms help us to dive deep into the intricacies of avian vocalizations. And when used in conjunction with good old-fashioned ear-birding techniques, they can open up new ways to hear and engage with birds. (See the article by Tessa Rhinehart, beginning on p. 50, of this issue for more on applications of sound spectrograms.)

Knowing the power of spectrograms, I was excited to dive into Nathan Pieplow’s latest book, the Peterson Field Guide to Bird Sounds of Western North America. This is the follow-up and companion to his Peterson Field Guide to Bird Sounds of Eastern North America, which came out in 2017 (and was reviewed in this column by Marky Mutchler). Both guides present impressively comprehensive overviews of the sounds of North American birds. They do this with written descriptions and spectrograms that illustrate the varied vocal repertoires of over 500 species per guide. In addition, there is a dedicated website where users can look and listen simultaneously in order to practice linking sounds with the images that describe them. I was pleased to find that the Western guide includes even more species than the Eastern guide, and the accompanying online library has 7,500+ audio examples. Each species account also includes an illustration of the bird’s plumage, but appearance is not the focus of this work. Here, sounds are the stars of the show.

The format of this field guide is unique, and pages filled with spectrograms might be daunting to some readers. Knowing this, Pieplow provides a comprehensive introduction to avian sounds and spectrographic images. The first 33 pages of the book explain how to use the guide, how birds produce sound, how spectrograms represent sound, and why avian sounds are so varied. Pieplow explains what to listen for when identifying sounds, and he describes variation in song form and timing. The classic Peterson field guides offered a breakthrough in birding by pointing out the visual field marks that distinguish species—does it have a wing bar? An eye-ring? A crest? This guide does the same with sounds. I expect that readers will find themselves listening for the acoustic field marks that Pieplow points out—was that a warble or a trill? Is there a pause between each phrase? Was that two birds duetting?

Pieplow’s descriptions are informative and fun to read. I’m very familiar with the intricacies of bird songs and spectrograms, but even so I learned something from the book’s introduction. I now understand the acoustic structure of a whit versus a chip note. I also now understand why mnemonics are used to describe bird songs. Does a Mountain Chickadee really say “cheeseburger”? No, of course not. But when we pronounce the “ee” sound in “cheese” we do so with our voices at a higher pitch than when we pronounce the “ur” or “er” in “burger.” On a spectrogram, this looks like a flat line for the whistled “cheese” and two lower flat lines for the two syllables in “burger.” Mnemonics, however, have drawbacks. Some sources don’t like the “cheeseburger” transliteration, and instead use “fee-bee.” Other authors, notably David Sibley, reject the notion of using word-based mnemonics altogether and instead describe bird vocalizations by their tones. Under that approach, the Mountain Chickadee’s song is a pure tone whistle, typically followed by two more whistles at a slightly lower pitch. So…are you confused yet, reading all of that? Is there an easier way to describe the song of a Mountain Chickadee? Pieplow argues (and I agree) that a picture is the best way to represent a sound on paper. Once you know how to interpret it, a spectrogram clearly and succinctly illustrates everything that I’ve just taken a long paragraph to attempt to describe with words.

Accordingly, the bulk of the Peterson Field Guide to Bird Sounds of Western North America comprises species accounts full of spectrograms. Each account includes images illustrating anywhere from four to ten distinct sounds made by each species. All of these sounds and more are available at the guide’s website. Images are accompanied by notes and text describing the acoustic quality of the sound, when the vocalization is typically used, and which sex or age classes use it most often. Pieplow does an excellent job of including multiple vocalizations for each species, and he gives examples of many sounds that are often overlooked. As someone who studies female vocalizations, I particularly appreciate that this guide includes excellent examples of the songs and calls of female birds.

While the depth of detail in each species account is striking, I’m most impressed by the breadth of coverage that this guide provides. It is no small feat to document the complete vocal repertoires of 537 species. I have built my career as an ornithologist on studying birdsong, and yet I can’t come close to Pieplow’s expertise in recognizing the variety of avian sounds across North America. I can happily describe the complete vocal acrobatics of a few species in great detail. Want to know about Rock Wren songs? Ask away! But if you asked me to tell you about every noise regularly made by every duck in California, I would be struck speechless. Luckily, I don’t really need to answer that question myself; I can refer you to this field guide.

How is one to make the best possible use of the Peterson Field Guide to Bird Sounds of Western North America? If you take it with you while birding, there’s a helpful index to bird sounds at the end of the book. When you hear a buzzy up-slurred note, you can consult the index for a list of birds that make such sounds. When you hear a song with a distinctive phrasing structure, you can look that up too. On days when you don’t want to carry it around in the field, you can still use this guide to improve your field identification skills. A little bit of study at home will teach you what to listen for and how to detect acoustic field marks. To document those field marks, you might be inspired to start recording more of the birds you encounter. With just an app on your phone, you can capture any bird sounds that have been eluding identification. Press record, bring them home, turn them into spectrograms, and use this reference to identify them. How many times have you done the same for a visual ID, snapping a picture to take home and pore over for subtleties? Now you have a way to do the same with vocalizations. My many years of poring over spectrograms have revealed to me amazing details found in the songs and calls of birds. I hope that readers of this guide will go down a similar path of discovery, joy, and appreciation. 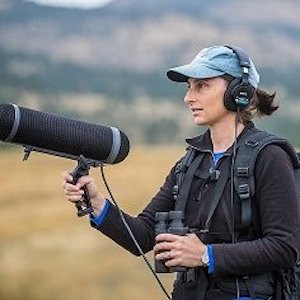 Lauryn Benedict is Associate Professor of Biological Sciences at the University of Northern Colorado, where she teaches ornithology, animal behavior, and animal diversity. She has long been fascinated by avian sociality, with an emphasis on how birds use sounds to signal meaning and coordinate behaviors. Her recent work examines the evolution of song in both male and female songbirds.

You can use for example the freeware Sonogram visible speech for the spectrogram generation.