Rogue Birder: The Making of a Modern Ornithologist, by M. Ralph Browning The cover of M. Ralph Browning’s Rogue Birder: The Making of a Modern Ornithologist is graced with a portrait of a Wrentit that stares directly at any potential reader, seemingly poised to leap off the branch to which it clutches and into the dense tangle of bushes surrounding it. Readers who follow this Wrentit inside the pages of Browning’s memoir will discover a life lived in the pursuit of ornithology, first in the Rogue River Valley (“Rogue Country”) of southwestern Oregon as a boy, later in the Smithsonian National Museum of Natural History in Washington, D. C., and finally returning to the author’s beloved Rogue Country.

Written in a friendly, casual tone, Browning’s memoir is a kind of birding Bildungsroman, chronicling formative birding experiences and critical decisions that allowed the author to pursue a career in ornithology. The text is interspersed with black-and-white photographs depicting some of the landscapes the author describes and images of him as a young man, professional, and retiree.

The book explores the importance of discovery, from new breeding records to county firsts, especially in the development of young birders. In this light, Rogue Birder might be of special interest to young readers who are considering a career in ornithology, or to birders curious to learn about how birding and bird distribution knowledge in southwestern Oregon have changed over the past several decades. There are insights into the day-to-day life of scientific study as a career: “Science is a kind of housework. You sweep and mop, wash the dishes, make the bed and maybe in a few days you refine things by polishing furniture, washing windows, it is endless. In a blink, it is time to clean house again.” Glimpses into the banalities of ornithology are funny, instructive, and perhaps sobering.

Some of these realities are particularly surprising, such as how, while in college pursuing a degree in zoology with the intent of becoming an ornithologist, Browning had nearly no time to go birding. Similarly, Browning recalls instances when he faced difficulty confronting established knowledge on bird distribution, especially published knowledge: “Possibly some of the local Rogue Birders thought my young whippersnapperish publications should not try to correct the good book, the AOU Check-list.” This episode is an example of what Browning uses as a binding theme for the work, how his efforts to be a Rogue Birder, or a birder in Rogue Country, also resulted in his being a “rogue” birder, a disputer of conventional wisdom and outdated knowledge.

One of the most exciting segments of the book is when the author, following his completion of high school and before beginning college, takes a nine-month birding road trip throughout the country in a VW Beetle. Like many birders’ trips both then and now, the journey was inspired by Roger Tory Peterson and James Fisher’s Wild America, and it’s the sort of canned beans–fueled adventure birders can’t get enough of. Browning’s Wanderjahr, plagued by car troubles, does not go precisely as planned, but the author succeeds nonetheless in finding several exciting life birds in California, Florida, and elsewhere.

In another adventurous chapter, Browning describes his work with a colleague surveying by dinghy breeding birds like Leach’s Storm-Petrels on islands off the Oregon coast. The author depicts the surprising nature of the work, often involving the excavation of burrows of nesting alcids, as well as the perhaps unsurprising danger involved: His friend falls down a steep sandy area and badly hits his head on a rock; Browning is later smothered by a wave from which he does not immediately surface; and both men worry about their inability to call for help in a pre–cell phone era. The magnetic pull of places, even perilous ones, with discoveries awaiting those with the means to make them is one birders will understand.

The author occasionally has the habit of introducing intriguing elements of storytelling, but then deferring those stories for later—“never mind, the crossbill story will have to wait”—or in some instances never returning to them. For examples of the latter, the reader learns relatively little of the author’s relationship with his wife, whom he met in the fourth grade and to whom the book is dedicated, as well as of his birding dynamic with his daughter, which he describes endearingly: “At that time, she was shorter than my waist…These outings with her were wonderful and she still talks about them to this day.” One imagines that these father–daughter adventures would have enlivened the memoir, but we are not treated to much more than the above.

Despite these moments in the narrative when readers may be left wanting more, the author is sincere and engaging. The memoir features several genuinely funny parts, when the author’s sense of humor is evident and charming, such as when he describes his time in the fifth grade as “when I began to transform from human to birdman,” or when he begins his tale thusly: “Once upon a time, actually in 1957, it hit me. I am a Rogue Birder.”

The wisdom to be gained from Browning’s story relates to a preoccupation confronted by many birders: Once we have acknowledged our love of birds and bird-study, what contribution can we make? How do we leave our mark on a world so filled with talented and dedicated individuals?

This is where we find the heart of Browning’s effort, his successful conversion of this preoccupation into an occupation, an entire life devoted to birds and bird-study, including everything from Petersonian bird-road trips to the discovery of the margra subspecies of Wrentit, a portmanteau of his parents’ names, Marvin and Grace. After we have followed Browning through his recollection of this great success, we may close the book again and find ourselves gazed upon by the cover-gracing Wrentit, still staring, and ready to leap. 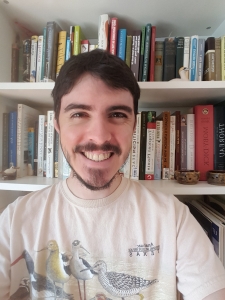 Frank Izaguirre is Book & Media Reviews Editor at Birding and a doctoral candidate in English at West Virginia University, where he is dissertating on how field guides have influenced environmental thinking. He lives in Pittsburgh, Pennsylvania, with his wife, Adrienne Izaguirre.