A review by Mark VanderVen

Bringing Back the Birds: Exploring Migration and Preserving Birdscapes throughout the Americas, by Owen Deutsch and the American Bird Conservancy 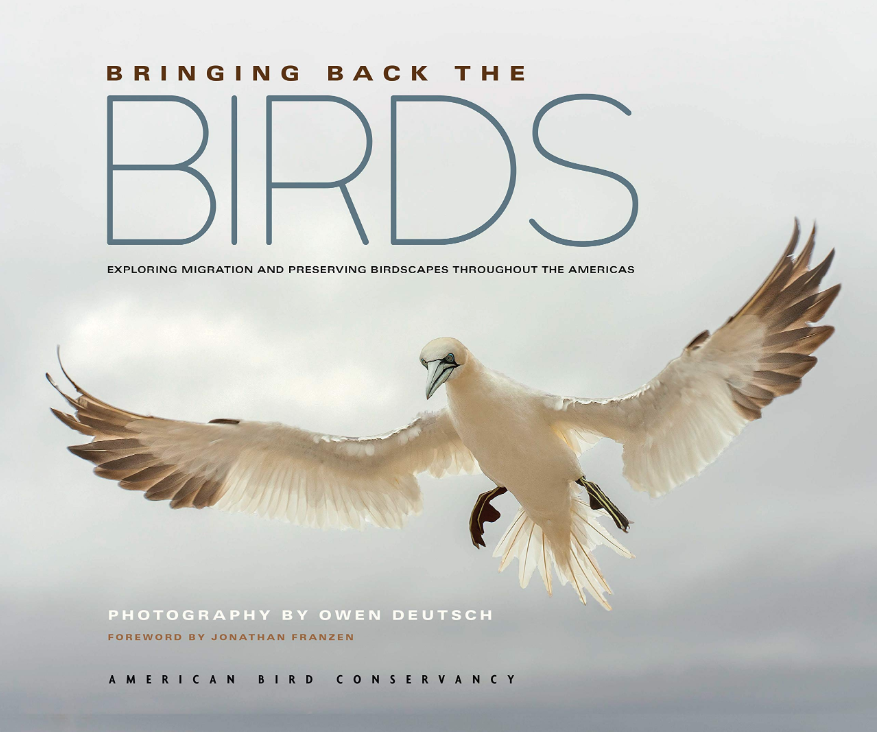 We are a dying symphony.

No bird knows this,

Margaret Atwood’s poem “Fatal Light Awareness” introduces the remarkable Bringing Back the Birds: Exploring Migration and Preserving Birdscapes throughout the Americas, giving us a haunting reminder of anthropogenically-driven mass declines of many American bird species. Hers is one of eight written pieces by bird-world luminaries that range in subject-matter from exploring why we like birds, the science of bird migration, the myriad threats that confront Western Hemispheric bird populations, and possible solutions to the dramatic avian declines in the Americas.

The best way to begin reviewing Bringing Back the Birds is to candidly confess the fun challenge of reviewing a book that offers so much. Does the reviewer begin by describing it as a beautiful coffee table book, lushly and omnipresently illustrated by Owen Deutsch’s photography? Does the reviewer boast of the acclaimed slate of contributors including Atwood, Jonathan Franzen, and the Kaufmans? Or do they start by emphasizing the overarching messages of the book, namely the grave threat to migratory bird populations and the role the management of American Bird Conservancy “BirdScapes” can play in stanching and perhaps even reversing decline in the Western Hemisphere?

Birds need all of healthy breeding territories, wintering grounds, and migratory paths. Novelist Franzen follows Atwood’s introductory poem with a foreword that serves as an abstract of the text to come. He extols the resilience and appeal of birds yet warns of the perils they face on and between wintering and nesting grounds. “Seabirds can still fly immense distances… but during breeding season they’re tied to the islands where they raise their chicks.” Yet Franzen provides a guarded sense of optimism, citing how the American Bird Conservatory (ABC) is working with farmers in places like Chihuahua, Mexico, to conserve and create habitat while enabling them to stay on their land.

Birds fascinate us. In the next passage, bird author and president of the American Bird Conservancy Michael J. Parr sets the tone for the book in his introduction, “Birds Are Amazing.” This is a chapter to be shown to the non-birder who pesters as to why we find birds fascinating, as Parr peppers the introduction with convincing facts and statistics on bird physiology and behavior: “Hummingbirds have… heart rates reaching over 1000 beats per minute.”

In his “The Power of Birds: Capturing Our Hearts and Minds,” Cornell Laboratory of Ornithology’s John W. Fitzpatrick reinforces Parr’s compelling thoughts by pointing out that “birds activate both sides of our brain.” He poignantly describes his transformative 1980s Hawaiian encounter with a singing male Kaua’i O’o, not only the last of its species but of an entire family of songbirds whose island endemism rendered them especially vulnerable to extinction: “Once I grasped the meaning of this song, I vowed to do my best to let every human on earth experience what it does to us.”

Conservationists and field guide authors Kenn and Kimberly Kaufman write the book’s first of a pair of chapters exploring the complexities of both migration and the set of threats to migratory bird populations. “Migration: The Thread that Connects the Americas” mixes interesting scientific facts and figures—the tiny Blackpoll Warbler will often fly over open ocean for more than three days—with evocative personal anecdotes, as they describe a late September evening in which they are moved by a cacophony of overhead songbird migratory flight calls. Map buffs will appreciate the “Migration Patterns” graphic depicting a few dozen intra-American migratory routes, some of which are a short east-west hop across Canadian provinces while others are impressive flight paths that are annual roundtrips between western South America and Ontario.

Peter P. Marra, once the director of the Smithsonian Migratory Bird Center, follows the Kaufmans with a companion piece on migration. “Migratory Connectivity: Understanding Annual Cycles” explores the intricate relationships between migratory avians and seasonal and geographic variables including climate, range, habitat, and food abundance. He reiterates the book’s recurrent theme about the importance of understanding a bird’s breeding, migrational, and non-breeding stages and the connective relationship between the locations where each stage is carried out. Marra describes how tracking technologies, especially back-mounted satellite transmitters, are returning data that improve our understanding of migratory connectivity.

Not all hope is lost. The final two essays of the book are written by Clare Nielsen, the ABC’s vice-president of communications, and tie together the concepts of the first six passages. “Bringing Back the Birds: Conserving Birds through BirdScapes” and its follow-up and book finale “Activism for Avians: What We Can Do for Birds” inform what the ABC is doing for migratory connectivity and what concerned entities can continue to do.

BirdScapes are the ABC’s primary tools for remedying migratory bird population declines. In Clare Nielsen’s words, BirdScapes are simply “large-scale areas given priority for habitat management to support the conservation of migratory birds.” BirdScapes typically range from 100,000 to 1 million acres in area. A BirdScape is not contiguous parcel of land owned and managed exclusively by the ABC. Rather, each BirdScape is determined on the combined bases of bird population data, habitat features, existing protected habitat, and political realities, and ranges across both public and privately held lands. The challenge to identifying a BirdScape is to find an area large enough in which conservation measures have a realistic chance of being effective, but also where management objectives have a realistic chance of working. Once a BirdScape is defined, the ABC begins working with collaborators that include conservation organizations, public land managers, and private landowners.

One such BirdScape is the “Guatemalan Conservation Coast,” a crucial non-breeding area for Wood Thrushes and other neotropical migrants in Guatemala’s Caribbean region. To illustrate the working relationships ABC needs to have with local landowners, Nielsen introduces us to Don Francisco Lopez, the “Guatemalan King of Black Pepper,” a land-owning cultivator of black pepper vines that grow on larger trees that provide vital habitat for neotropical overwinterers.

Humans need to conserve and expand habitat and reduce threats if they want to save migratory birds. Nielsen concludes the book with “Activism for Avians” and emphasizes that it is not too late to save the birds and that bold steps have already been taken. Over the past 20 years the ABC has been active in either establishing or expanding over 70 bird reserves in the Americas. The Lear’s Macaw, clinging by a fragile talon above the maws of extinction but thirty years ago, has expanded its population fifteen-fold, primarily through the work of the ABC and a Brazilian collaborative agency to establish a reserve for them in the Amazon rainforest.

Opening to any page of Bringing Back the Birds will treat the reader to Owen Deutsch’s alluring photography. A Bald Eagle in close pursuit of a Great Blue Heron makes for a powerful and dramatic image. While Deutsch’s pictures are representative of a variety of American migratory bird taxa, the large colorful photos of tropical forest birds are especially captivating. A Broad-billed Motmot, a Red-billed Streamertail, and Green and Shining honeycreepers are among hundreds of subjects of Deutsch’s keen and sensitive eye.

Beyond its well-crafted essays and lovely photographs, a beauty of Bringing Back the Birds: Exploring Migration and Preserving BirdScapes throughout the Americas is its compositional richness and diversity. One can either pick it up off the bookshelf for a good educational read or lift it from the coffee table for the avian eye candy. And if these aren’t compelling enough reasons to buy the book, know that 100% of book royalties are used to support the efforts of the American Bird Conservancy!