A Worldwide Look at How Birds Respond to Winter

A Worldwide Look at How Birds Respond to Winter

A review by Marcel Gahbauer

Birds in Winter: Surviving the Most Challenging Season, by Roger Pasquier 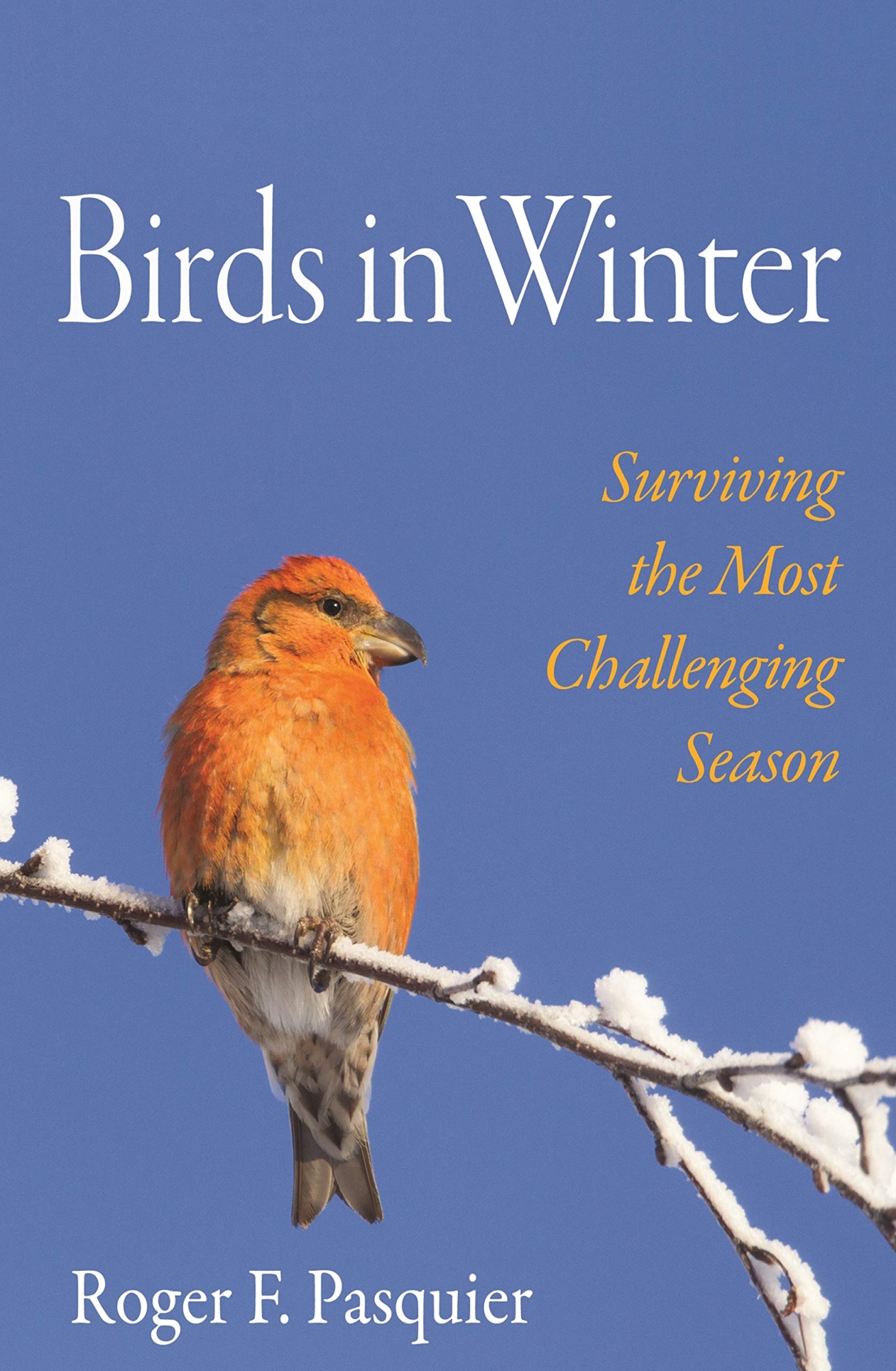 Birds in winter. Seeing those words and living in Canada, my thoughts instinctively turn to snow, cold, and seasonal bird specialties such as the "winter finches" and Snowy Owls. With a front cover featuring a Red Crossbill on a snowy branch against the backdrop of a crisp blue sky, Roger Pasquier's Birds in Winter gives exactly that kind of first impression.

However, the book's central theme is arguably captured better by the title of the first chapter, "Responding to Winter.” Only half of the book's ten chapters focus directly on the lives of birds during winter. Three others address how winter influences behaviour throughout the rest of the annual cycle, with particular emphasis on migration, but also including discussion of molt, food storage, and the potential for fluctuations in winter conditions to carry over to influencing reproductive success. The final two chapters on conservation and climate change explore how the ways that birds have evolved to respond to winter are under increasing pressure to be altered. Throughout the book, selected topics are complemented by nice black-and-white illustrations from Margaret La Farge.

Pasquier is clearly fascinated by his chosen subject matter. In the introduction, he notes that he has "never had more fun" than researching and writing this book. The extent of his effort is reflected in the 33-page bibliography listing over 700 sources, and in the thorough 21-page index—substantial for a book otherwise comprising only 250 pages. Correspondingly, each chapter is bursting with examples illustrating the various topics presented, an approach that seems well-suited to a broad audience. Yet parts of the text can come across as rather technical, with use of terms such as “congeners” and “gonadal recrudescence” that might have some readers wishing for a glossary. Elsewhere, wording is sometimes simply awkward, such as a subsection on “Vertical elements in horizontal landscapes”, in which Pasquier writes that birds occurring in such areas “have had no experience with obstacles in the third dimension”.

Of greater concern are some bold statements that can easily be misinterpreted if the reader isn't already quite knowledgeable about the subject. For example, it is clearly not true that "[a]ll passerines are scatter-hoarders", as many species do not hoard at all. However, in the context of a discussion on hoarding strategies, it was presumably meant to convey that among passerines that store food, this is the only strategy employed.

Quibbles about language aside, the book is full of stories that paint vivid pictures about birds and how they interact with each other and their surroundings. Still stuck in my mind is the image of male Black-billed Capercaillies in Siberia that "garden" young larches. Because these birds are too heavy to browse the outer twigs of taller trees, they instead trim the tallest shoots of saplings emerging through the deep snow, and in doing so, encourage the growth of a more shrubby form that may last for decades. Although Birds in Winter focuses heavily on North American species, selected stories like this from Eurasia add a welcome balance. Occasionally even a few southern hemisphere birds reach the spotlight, such as the Long-tailed Cuckoo that breeds only in New Zealand. It spends winter over a vast range of Pacific islands to the north—with individuals often gradually island-hopping westward over a period of several months, taking advantage of prevailing winds.

As these two examples illustrate, much of the book examines behaviour. The fourth chapter, "Spatial and social organization", illustrates a breadth of strategies. If you have a bird feeder that attracts House Finches, watch to see whether you can detect that females (and young males with limited amounts of red plumage) are dominant over older males with more red, a curious twist on the usual dominance hierarchy. Pasquier also showcases other unconventional perspectives on territoriality, such as how some Sanderlings wintering on the Pacific coast “adopt” a Black Turnstone, treating the space around wherever it moves as their ephemeral territory. In doing so, the Sanderling gets second crack at any prey exposed by the turnstone’s actions. In a similar vein, Worm-eating Warblers pick a mixed flock of resident Central American birds to follow through the forest understory, chasing away others of their kind—benefiting not only from the prey uncovered by the “locals” but also from the collective predator vigilance of the flock.

The concise summaries of complex interactions among species make for interesting reading. Growing pressure on shorebirds from expanding Peregrine Falcon populations has been well documented, but how is it that an increasing number of Bald Eagles also affects shorebirds, which are easily agile enough to avoid a more lumbering predator? Pasquier summarizes research from near Vancouver, British Columbia, where over one-third of Dunlins captured by Peregrine Falcons were stolen by Bald Eagles or other larger raptors, forcing the falcons to go on the hunt again to get their own meals. Meanwhile, Dunlins in this area have taken to "aerial roosting", taking flight one or two hours before high tide and returning up to four hours later. Clearly this is energetically expensive, but there it has become preferable to roosting on shore during high tide, where they would be concentrated in large numbers, close to where Peregrine Falcons are perched and waiting to hunt.

As intriguing as this scenario is, it describes an interaction among species at a location where all of them are particularly numerous. Here and throughout the book, readers need to bear in mind that examples are featured because they are interesting, but they are not necessarily typical. Another case involving raptors describes the vulnerability of smaller accipiters to winter predation. Pasquier cites only one study by Roth et al. (2005) which reported a juvenile survival rate of 9.4%. Yet a quick glance at the original paper shows that the authors noted that their findings were substantially below the typical juvenile raptor survivorship rates of 20-50%. Omitting that context leaves the reader of Birds in Winter thinking that winter is substantially more hazardous than it typically is. Similarly, some data are misleadingly presented as general facts rather than as results of a particular study. For example, Crested and Willow tits in Latvia are reported as moving in mixed flocks of four each—this may well be an average scenario, but as written it comes across as an improbably rigid general rule.

Selecting examples to suit the narrative is of course the author's prerogative, and in a book that provides an overview of so many topics, it’s understandable that a limited number of case studies can be included. But factual errors are of greater concern. The most basic of these are typos (Winnepeg rather than Winnipeg, and Quinana Roo instead of Quintana Roo). More significantly, Minnesota's famous Hawk Ridge Bird Observatory is erroneously reported to be on the south side of Lake Superior; it is of course on the north, accounting for the funneling of raptors past it in fall as southbound migrants move parallel to the lake until they can bypass it at Duluth.

Geography and climate seem to be recurring weak points. In discussing the departure of shorebirds from Mauritania's Banc d'Arguin, Pasquier mentions their orientation by stars "at a latitude where there are never clouds" (at that location perhaps, but certainly not an entire latitude—though "never" seems unlikely in any case). Perhaps most curiously, Pasquier asserts that in much of North America only one species of titmouse or chickadee is present, and nowhere do more than two occur. Yet across most of the eastern United States, Tufted Titmouse overlaps with either Carolina or Black-capped Chickadee, and in most of its range Mountain Chickadee co-exists with at least one or two other species—as many as three in southern British Columbia, northern Idaho, and northwestern Montana, where Boreal, Black-capped, and Chestnut-backed Chickadees can also be found.

Collectively, these issues cast an unfortunate shadow of doubt over the reliability of the research underlying the book. Pasquier's extensive referencing generally at least makes it easy to dig deeper on most topics of interest. That makes it all the more frustrating when statements are made without any explanation or supporting references. Quick, what would you consider to be the North American ecological equivalent of the European Robin? On two occasions, Pasquier asserts it to be the Hermit Thrush. That would have been quite far down my list of guesses, and a supporting reference (or even Pasquier's own rationale) would have been helpful. Oversights on key topics are also disappointing. For example, the section on "new tools for studying migration and other movements" highlights satellite tracking, global location sensor loggers, and stable isotope analysis—all important techniques to be sure, but no longer all that novel. However, it overlooked the tremendous insights generated by the Motus wildlife tracking system (https://motus.org/), which since its launch in 2012 has expanded to 875 receiver stations in 28 countries on 4 continents, providing data on over 200 species and resulting in over 80 scientific publications.

But in the end, to focus overly on details would be to miss the main message of Birds in Winter. There are, after all, many other references that address topics such as migration and social structure far more comprehensively. Where this book shines is in driving home from multiple angles just how pervasively winter influences almost all parts of the life cycle. Birders of all backgrounds are likely to find that Birds in Winter greatly expands their appreciation of the season's influence, and will no doubt enjoy learning more about the lives of both familiar species and those they may have never heard of before. 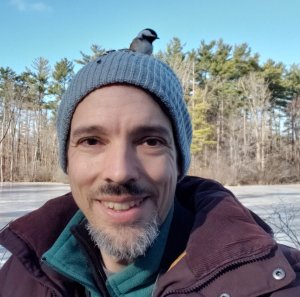 Marcel Gahbauer lives in Ottawa, Ontario, where he is a biologist with the Canadian Wildlife Service and serves as a member of the Committee on the Status of Endangered Wildlife in Canada. Marcel has participated in several bitterly cold Christmas Bird Counts, but otherwise admits to being somewhat of a fair-weather winter birder.