A review by Peter G. Kaestner

Birds of Vietnam, by Richard Craik and Lê Quý Minh 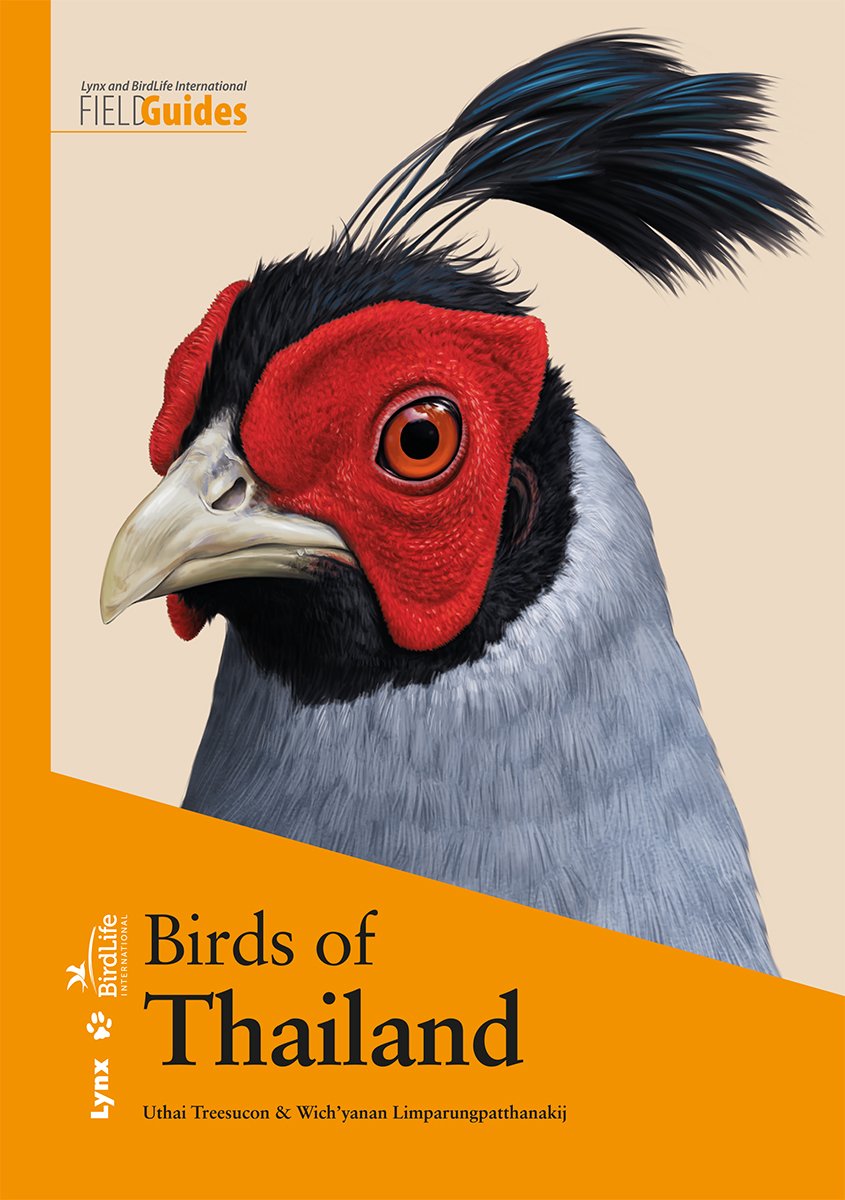 One of the most significant achievements in the annals of bird book publishing has been the Handbook of Birds of the World (HBW), a massive, 17-volume masterpiece that was the brainchild of the Spanish physician and ornithologist Josep del Hoyo. This treasure trove of ornithological information is highlighted by thousands of excellent illustrations of every bird on Earth. Dr. del Hoyo has expanded this collection with the Internet Bird Collection, which showcases videos, photos, soundfiles, and HBW Alive, a subscription service that brings enhanced access to this online treasure trove.

I have a set of the massive HBW in my library, but at over eight pounds per volume, it doesn’t travel well. Now, Lynx has a solution. They, along with BirdLife International, are producing a line of field guides incorporating the beautiful illustrations from HBW and text from local experts. These country and regional guides are proliferating at an impressive rate. Five are published, and three more—Colombia, the Philippines, and Malaysia—have already been announced. We’ll be looking at three from Southeast Asia: Thailand, Vietnam, and Cambodia.

The bottom line for all three of these tomes is the same. Each is a real advance on the previously available guides, and each will be not only a welcome addition to any birding library, but also an essential field companion should you visit these birdy locations. 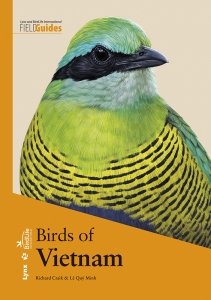 Because these books share so much, I am going to lump them—I hate that word—and discuss their shared characteristics. First, the covers are great. Each features a dramatic, larger-than-life portrait of a characteristic bird of the country: Siamese Fireback (Thailand), Bar-bellied Pitta (Vietnam), and Red-headed Vulture (Cambodia). They all share an attractive design and cover color that is on the orangey side of fulvous; the series is color-coordinated, with each geographic region being different. Inside the front cover is a relief map of the country with major cities located. Inside the back cover is a similar map with the birding hotspots indicated—we’ll discuss hotspots later. The BirdLife International–Lynx field guides are published in both hardcover and a flexi-cover. My review copy of the Thailand guide is hardback, and it is very sturdy. The other two are flexi-covers. I fully expect that they would do well in the humid tropical forests of Southeast Asia and the attendant rough handling that occurs on a multi-week birding tour. These are definitely field guides, but they are not small enough for all but the biggest pockets.

The Tables of Contents are interesting in that they all contain a key and codes to identify the artists who painted each plate. I love accountability like that. The introductory portions of the books are 22 or 20 pages long, and chock full of useful data. They contain general information about the country, including the history of ornithology and an overview of the birds of the country. Sections on geographical scope, climate, habitats, and bird conservation give expected info, including a listing of all the threatened species according to BirdLife International.

They all contain a cautionary paragraph about overuse of playback, and the Vietnam guide also warns about the overuse of feeding stations, which have proliferated in recent years. While the books don’t make the connection, I would be remiss not to mention the relationship between photography and overuse of playback. Unethical bird photography is a huge threat to the welfare of birds as photographers strive to get the perfect image. Similarly, bird guides have a special responsibility to balance the welfare of the birds against the desire to get great views for all their clients. We all must be aware of the impact we have on the birds that we are enjoying.

The “Birding in” sections contain a wealth of information about bird finding. One of the most helpful features of the books is the birding hotspots around the country. The Vietnam, Thailand, and Cambodia books have 18, 34, and 35 hotspots, respectively. When used in conjunction with the free, downloadable checklist, this information is very helpful in finding and identifying the birds of these countries. Even more importantly, it allows for a birder to plan a visit, knowing where to expect specialty birds.

Not surprisingly, the taxonomy of these guides follows the HBW–BirdLife International Illustrated Handbook of Birds of the World (2014, 2016). This is one of the three dominant world bird lists, along with the Clements’ (eBird) and IOC lists. Fortunately for all world birders, the professional ornithological community recently began a process of harmonizing the world lists.

One of the novelties of these books is the use of subspecies groups. These are potential splits that are presented with all the same kinds of information as the good species. A good example is the Ashy Drongo (p. 199 in Vietnam, p. 245 in Thailand, and p. 173 in Cambodia) that is split into three subspecies groups: Blackish, Chinese White-faced, and Sooty, which are all presented fully with illustrations, maps, and text. (The main difference is that there is only one QR code—these will also be discussed later in the review—for the Ashy Drongo.) In my view, this is a fabulous innovation that deserves emulation. Each book includes not only historical records but newly recorded vagrants.

The most important part of a field guide is always the illustrations, and these three all do well in that category. They all rely on the uniformly excellent illustrations from the HBW, and augment them when needed. There are a few shortcomings, such as the large gulls, which have only eight images for four species of large gulls in the Thailand guide (p. 141). There are only two images of non-adult birds among the four species. Another useful illustration that is missing is the distinctive juvenile Black-eared Kite. For the vast majority of species, however, the illustrations are completely adequate. 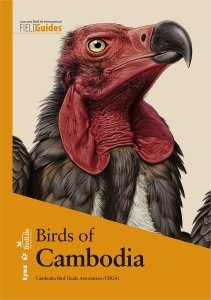 The number of species on each plate is relatively low, averaging between five and six, allowing for good-sized illustrations. There are two odd results of cutting and pasting the images from the HBW into the field guide. The first is that on several occasions birds are not presented with similar species, but are on different pages. Three examples in the Thailand book are the two Phylloscopus warblers on a bulbul plate (p. 293), the Hairy-backed Bulbul on the swallow plate (p. 279), and the Burmese Yuhina on the white-eye plate (p. 313).

The other issue is more substantive—and related to the previous one since it is caused by the mixing of unrelated birds on the same plate. And it could affect your ability to identify birds. In several cases, the relative sizes of the birds are not correct. For example, on p. 145 in the Cambodia book, the Annan Barbet (22 cm) is shown much smaller than the Eurasian Wryneck (18 cm). In the Vietnam book on p. 153, the Blue-bearded Bee-eater (33 cm) is bigger than the Wreathed Hornbill (80 cm)! Their principle was to keep the scale accurate within a family. The editors figured out the problem by the last book (Cambodia), so there is warning in the introduction and note on some plates (for example, p.131) that “not all figures to scale,” although they missed the mis-sized Collared Kingfisher on the barbet plate on p. 143.

The text, which is opposite the illustrations and the large, color range-maps, is uncommonly helpful, with emphasis on the information that a birder will need to identify birds in the field. Data on behavior, abundance, habitat, and identification (including similar species) are presented concisely and clearly.

A notable feature in this series of books is how the books access additional information. All three books come with a card that contains a code with which you can download a checklist of the birds of the country. The checklists contain ten columns for daily lists. In addition, they are packed with information, showing which are endemic, their status in the country (abundance and presence), and a listing of the country’s hotspots and which ones harbor the species in question. This brings full circle the information on hotspots in the books, by giving you the relationship between the birds and the hotspots.

Another way that the books retrieve information from the internet is through QR codes for each species. These links point to the Internet Bird Collection (IBC) of HBW (hbc.com/ibc) and contain a wealth of information. The IBC features thousands of photos, sound recordings, and videos to assist in identification of the birds. Of course, the only catch with the QR codes is that you need to have a connection with the internet, which is not guaranteed in remote areas—including in the U. S. Another issue with the QR codes is the website to which the code points. The Lynx Edicions QR scheme points to the HBW and IBC. The Cornell Lab, however, now owns this content, and with the recent launch of the Birds of the World site, those links may become outdated. Note that some of the IBC data will be included in the Macaulay Library, and that the HBW data are being merged into Cornell’s Birds of the World site.

For those who use apps when they are away from internet access, there is a “South East Asia” birds app that appears to cover primarily Vietnamese birds available, at least from the App Store, for free. It contains information on 851 species, including photos and sound recordings from xeno-canto.org. The app would be a useful adjunct to the book in those remote areas where cell signals are weak or non-existent.

With all this data available from the internet, one might question the usefulness of hardcopy books. I feel that both sources of information are valuable. On the one hand, books present species together so that they can be instantly compared, and they use paintings which uniquely show identifying characteristics. On the other hand, digital resources offer many, many more images and can present a variety of plumages and sound recordings invaluable for bird ID.

For those of you who have read all the way to the end, you have probably been wondering how these books stack up to the gold standard for Southeast Asia, Craig Robson’s Guide to the Birds of Southeast Asia. Robson’s book has the advantage of covering all the countries from Burma to Peninsular Malaysia to Vietnam. So, if you are traveling to Burma, Laos, or Malaya, Robson would be the clear choice. However, a visit to Vietnam, Cambodia, or Thailand would be better served by these individual guides. They have much larger illustrations, better organized data, more useful presentation of potential splits, and access to online data via the QR codes.

The bottom line is that these books are very valuable additions to any bird library and essential companions should you visit these countries. I can’t wait for the next books in the series to be published. 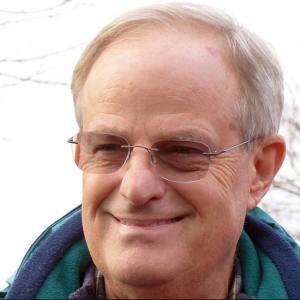 Peter G. Kaestner is a retired U. S. diplomat and world lister. He was the first person to see all the world's bird families, and he discovered a new bird, the Cundinamarca Antpitta, Grallaria kaestneri. When not adding to his life list, Peter is a part-time tour leader for Rockjumper Worldwide Birding Adventures.