A review by Melissa T. Yang

A Pocket Guide to Pigeon Watching: Getting to Know the World’s Most Misunderstood Bird, by Rosemary Mosco Rosemary Mosco opens A Pocket Guide to Pigeon Watching: Getting to Know the World’s Most Misunderstood Bird with one of my longtime favorite pigeon quotes—when Charles Darwin exclaimed to Charles Lyell in 1851: “I will show you my pigeons! Which is the greatest treat, in my opinion, which can be offered to [a] human being.” In the same year, E. S. Dixon noted in The Dovecote and the Aviary: “At the present day, a love for Pigeons is considered rather low.” Similar disclaimers drove home Dixon’s idea for more than a century—Barbara Allen began Pigeon in 2009 by echoing Carl Naether’s glum query in The Book of the Pigeon and of Wild Foreign Doves (1964): “Don’t you know that no pigeon book has ever become a best seller?...I have never seen a pigeon book that paid for its printing and effort...” Thankfully, change is in the air, and several successful pigeon projects have been released in recent years. Rosemary Mosco’s brilliant Pocket Guide is a leader of the flock, brimming with wit and knowledge, bringing joy and care, balancing art and science.

Part 1 begins with a pigeon buttoned up in a polka-dot vest, waving with chalk in wing at a blackboard: “Professor Pidge Welcomes You to Pigeons 101.” From these opening gestures, Mosco focuses on appealing to readers she assumes might be unenthusiastic about pigeons, and makes a dedicated effort to sway them throughout. In Part 2, “The Passion and the Poop,” Mosco traces pigeon-human relationships, ancient to present, from wild to domestic to feral. Part 3’s anatomy lesson sets up for more scientific features, from breeding and plumage to behavior, in Parts 4 through 6. Part 7 offers advice on pigeon rescue before closing out with additional resources and readings.

Fans of Mosco’s “Bird and Moon” cartoons will delight in Mosco’s characteristic style of clever illustrations. Readers will admire her skillful distillation of avicultural and ornithological research into fun and pun-packed prose. Design enthusiasts will appreciate the artful and intentional details of information design, down to the pigeon tracks we follow from inside cover to cover. There are pigeon footsteps pattering across the table of contents, and bordering colorful boxes throughout, leading readers to plentiful pigeon asides, footnoting fun facts, while highlighting them. In the book, Mosco anticipates many common questions about pigeons—say, why are they called “rats with wings”?—and addresses them in serious and comical modes—for example, with a sketch of a pigeon and rat seeing eye-to-eye across an equal sign, agreeing they “resent this comparison” (p. 58).

Like pigeons, the book travels swiftly across a broad landscape of topics. Furthermore, it appeals to wide audiences with its surprising depth, detail, and nuance given its brevity and portable form. Speaking as a rhetorician who writes about pigeons, I found moments where Mosco lingers on language to be most irresistible. While discussing differences between pigeons and “doves,” as Rock Pigeons are also often called, Mosco covers a matter at the heart of my own work on pigeons: how both are technically the same species, Columba livia, but their common names are attached to specific cultural connotations: “Many people think of pigeons as dirty and doves as peaceful, elegant, and even holy” (p. 11). Additional commentary on words moves from early tidbits on “Peristeronic Pedantry” (p. 14) to a list of pigeon expressions, such as “stool pigeon” (a.k.a. a police informant), drawn as a confused pigeon perched on a stool asking “Why am I up here??” (p. 53).

As a non-scientist, I was grateful for the straightforward ways in which Mosco drew out and diagrammed pigeon anatomy and genetics for easy understanding—of course, these are simplified, cute, and stylized diagrams, and not textbook drawings, but can still aid readers in grasping basic concepts. In addition, her continued attention to language in these sections is notable. On p. 63, Mosco explains that “bill” and “beak” are also interchangeable, so “if a grumpy birder tries to correct you on your word choice, bill them for your time.” While explaining pigeon stomachs, Mosco pivots to historical gizzard idioms, proposing: “It’s high time we brought the gizzard back into ordinary parlance” (very much agree, p. 82). In terms of language use, Mosco never shies away from using technical terms when warranted, and never talks down to readers even while covering basics. However, she does slip into clickbait-esque language some may find off-putting. Try not to be deterred by the occasional “This answer will shock you” and “you’ll never believe…” remarks meant to tease non-bird-lovers. This a productive book for newbies as well as for lifelong birders and pigeon lovers who crave positive avian representation.

Some of the most critical moments and takeaways from Mosco’s Pocket Guide are those which deal with bird conservation and pigeon rescue. Important tips are peppered in parentheticals early on, for instance, “Don’t release doves. When we toss these gentle pets into unfamiliar surroundings, they tend to starve, get hit by cars, or succumb to predators” (p. 13). (That said, the cruel dove release industry deserves a more thorough takedown than any parenthetical could offer). When introducing the pigeon’s family and reminding readers of the tragic anthropogenic extinctions of the Dodo and Passenger Pigeon, she mentions: “about a third of the members of Columbidae are in trouble, threatened by overhunting and our insatiable appetite for land” (p. 19). The bulk of practical advice arrives near the end, in Part 7: “Pigeon Troubleshooting.” After clarifying why pigeons are harmless to humans, Mosco addresses scenarios where people might need to help them. She shares advice on how to go about doing this ethically, citing pigeon support resources and reliable organizations such as Palomacy.

Finally, there is an “Extra Credit” section, on how to transfer pigeon-watching skills to learn how to bird and, beyond avian observation, to cultivate a wider appreciation of the larger natural world. In this project, Mosco refuses to be pigeonholed, which adds to the strength of her work. Naturally, the book begins and ends (“anatomically speaking,” at the cloaca) with poop—a reminder that the balance of serious and silly can co-exist harmoniously, just like pigeons and people can.

I could extoll the wonders of A Pocket Guide to Pigeon Watching: Getting to Know the World’s Most Misunderstood Bird endlessly, and urge anyone who hasn't read it already to go out and enjoy, and then get back to watching pigeons. This passion project is at once a peristeronic paean, an educational celebration, a manifesto for pigeon care, and more. Rosemary Mosco’s book is an absolute delight for seasoned pigeon lovers to behold, with plentiful insight to offer for novice birders and enough charm to convert even the toughest pigeon skeptics to curiosity and wonder. 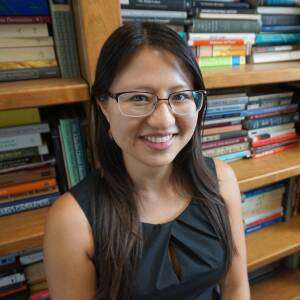 Melissa T. Yang is the Writing Center Director at Emory University, where she also teaches courses themed around animals and the environment. Melissa holds a Ph.D. in English from the University of Pittsburgh, and enjoys researching birds through literal and figurative lenses. She is currently working on a book featuring pigeons and other birds rhetorically constructed as pests.