A Message of Hope in an Age of Loss

A Message of Hope in an Age of Loss

A review by Kyle Carlsen

Irreplaceable: The Fight to Save Our Wild Places, by Julian Hoffman

We are living in an age of loss. In 2019, news headlines lamented the loss of 3 billion birds in North America in less than 50 years. Europe lost an estimated 421 million birds between 1980 and 2009. And we are seeing similar trends in other plant and animal groups. Our biodiversity is disappearing at an alarming rate, with some estimates suggesting up to half the world’s species will be gone by the end of the century.

Julian Hoffman’s Irreplaceable: The Fight to Save Our Wild Places is a book about loss. It is a book about the loss of our most important places, our wild places, and the human and non-human communities that depend on them. Hoffman travels around the globe, visiting specific places facing real, imminent threats, and listens to the stories of the people fighting to prevent those places from being destroyed. In doing this he examines the meaning of place and the critical connections between people and nature.

Born in the northeast of England and raised in southern Ontario, Hoffman now lives beside the Prespa Lakes in the mountains of northwestern Greece. (He and his wife decided to move there after reading a book, Prespa: A Story for Man and Nature by Giorgos Catsadorakis, which he discovered, as it happens, from a review in the back of a birdwatching magazine.)

As wild places disappear, Hoffman observes, so do the opportunities for people to connect with and experience nature. “The gradual severance of our relationship with the natural world stems, at least in part, from a lack of experience with it in our immediate surroundings,” he writes. “Whenever a place is destroyed, all that possibility is taken away with it, robbing people of an incalculable potential.” In an age when more than half the human population is urbanized, it is critical to preserve and make accessible wild spaces, not only for the benefit of birds and other wildlife, but also for our own mental and physical well-being.

In the first few pages of Irreplaceable, Hoffman describes, almost cinematically, a murmuration of starlings he and others observe from the Brighton Palace Pier in England. The writing is vivid and immersive, plunging the reader into the scene of swirling birds. Over a thousand “had now coalesced into a single aerial mass, each flickering and feinting of a life form mimicked by its neighbor, the process repeated over and over throughout the gathering,” he relates. “Whenever I tried to follow the trajectory of a single starling, to glimpse individuality amidst union, my eyes lost focus within seconds, tugged inside the dense, darkly incandescent pulse of the cauldron.”

From that pier, and with that imagery of the murmuration never too far from the foreground, Hoffman launches into a series of stories about wild places. There are stories of ancient woodlands, urban meadows, and coral reefs. Places in the U. S. and the U. K., in Greece and India. Places with prairie-chickens, nightingales, lynxes, and hornbills. Places that are being destroyed to make room for more infrastructure such as roads, housing, and airports. Each chapter chronicles real places with real problems and real people working to solve them.

Through these singular examples of threatened places and the conversations surrounding them, we can better understand them and relate to them on a personal level. As Hoffman points out on more than one occasion, narrative is often more persuasive than statistics in “getting many of us to pay attention” to what is happening to our natural world.

That’s not to say that Irreplaceable is completely devoid of facts and figures. Hoffman references relevant studies and data throughout—but this book is more of a love letter than a lecture. It is a kind of conversation starter, a prompt to get us thinking about where we’re headed as individuals and as a collective society. How much are we willing to lose in our continuous pursuit of so-called progress? What are “the consequences of our uninhibited consumerism,” as Hoffman puts it? And are we willing to stand by as our wild spaces continue to slip away from us forever?

Some readers may find the writing style a bit too flowery, but I think most will appreciate the lyrical cadence of the words and the skillful, frequent use of alliteration and imagery. Hoffman paints a picture with the language. He puts us in these landscapes he describes, inviting us to use all our senses to experience everything that makes them special. He relates the murmuration to “the black coil of a sinuous snake at sea, a bowl set spinning through salt air, a wine glass brimming with the last of the drained light.” When describing the liberating landscape of the Hoo Peninsula, he recalls “the way the sky over the estuary seems uncommonly deep, the way the drawl of a river boat, or the call of curlews arching high overhead, is gathered by the air and held there for longer than usual, so that the sound sifts down, as lightly as snow.”

The poetic writing style seems to support the primary intent of the book, which is to testify for the “special qualities” of threatened places, to evoke a sense of wonder and maybe even nostalgia, to remind us of what we stand to lose. Hoffman says that “place can be powerfully transformative.” I think the same can be said about good writing.

This is a book about loss, yes, but it is also a book about hope. These stories show us what is possible when ordinary people—activists, researchers, birders, hunters, schoolteachers, schoolchildren—speak out to preserve and protect our most important places. They teach us that, together, we can resist loss.

Irreplaceable is a beautiful and important piece of nature writing. It should be read and savored by everyone who loves wild places and wild things. 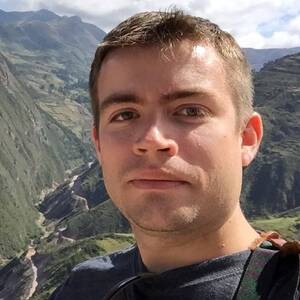 Kyle Carlsen is a writer and field researcher. He became interested in birds at the age of six and has been watching, studying, writing about, and talking about birds and their habitats ever since. Kyle’s writing has appeared in a number of books and magazines. He works for New Jersey Audubon.