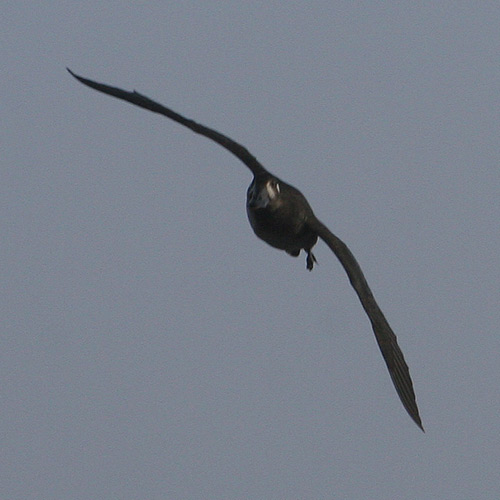 The wide bill and webbed feet certainly support such an identification. However, I suspect that the picture was something of an optical illusion for some and I can vouch for that possibility as no small number of times upon glancing at the picture, my impression was that the head was at a very different angle than it really is. And that makes all the difference. In actuality the bird is flying right at us with its bill leading the way.

[reveal heading=”%image% What species do you think this is? Once you’ve decided, click here to find out if you are correct>>”][/reveal]

So, we have a generally dark duck with two white spots on the head, one each anterior and posterior to the eye. This pattern should reduce the possibilities to just three species, White-winged and Surf scoters and Harlequin Duck. Thus it is well that those three species topped the list of responses. Of course, two of those species have to be incorrect. White-winged Scoter differs from the other two in having white secondaries, so it ought to be most readily eliminated from consideration if we’re sure that we can see the quiz bird’s secondaries. That tract is visible in the picture on the bird’s left wing, though I won’t fault anyone for thinking otherwise. There is another way to rule that species out that does not depend on our correct analysis of precisely which wing feathers are visible in the picture: we simply need to scrutinize the head pattern.

The meeting of bill and head feathering on White-winged Scoter is strongly slanted, allowing the white on the front of the face to extend well forward virtually to the nostrils. That is not the pattern we see in the picture, where the white patch meets the bill base in a nearly vertical manner, thus constraining the white into a more-vertical-than-horizontal patch unlike the reverse pattern of White-winged Scoter. Additionally, the white is well separated from the nostrils.

The bird’s head pattern is an exact fit for Surf Scoter and the dark belly tells us that our bird is not a juvenile.