Bermuda highlights of the season included: the first record of Northern Fulmar, two Brant, the sixth White-winged Scoter; and the biggest-ever arrival of Killdeer. The Bahamas also provided some highlights of vagrant corvids from Florida, a Black Vulture, some interesting reports of pelagics, and a Little Egret. From Puerto Rico, some exciting survey results indicates a more widespread wintering range for Bicknell’s Thrush. In the Lesser Antilles, there was a remarkable report of Pacific Golden-Plover and the second record of Eurasian Spoonbill from Barbados.

An American Golden Plover was extremely unusual at Spittal Pond, Bermuda from 5–9 Dec (PW). The Pacific Golden Plover found in Barbados in May 2017 was accompanied by a second one on 25 Feb (JW) and they stayed together up to March. An unprecedented arrival of up to 1,000 Killdeer occurred in Bermuda 5–6 Jan as a result of Storm Grayson in the northeast US. A flock of about 500 birds was at the Airport on 6 Jan (AD) with individuals and small flocks scattered widely in Bermuda. A group of 35 Killdeers—a good number in the Lesser Antilles during the winter period—was observed on St Kitts and Nevis on 16 Jan (BD, SW). In Bermuda, single Western Sandpipers at Cooper’s Is. from 6–8 Jan (AD), Spittal Pond from 8 Jan–1 Feb (AD) and Outerlea Farm from 10–16 Jan (PW) were undoubtedly fallout from Storm Grayson. A Ruff stayed one day at Congo Road, Barbados on 3 Jan (JW). Single Long-billed Dowitchers were seen at Cooper’s Point, Bermuda on 6 Jan (AD) and Riddell’s Bay GC, Bermuda on 22 Jan (AD). An American Woodcock was a lucky find at the Arboretum, Bermuda on 13 Jan (PF). One Black-headed Gull was at various locations throughout the season with two together at Spittal Pond, Bermuda from 1 Jan–28 Feb+ (AD, PW). Two Parasitic Jaegers were seen on 16 Jan (KK) soaring over the docks in Falmouth at King Street, Trelawny, Jamaica. Five Lesser Black-backed Gulls were seen on 17 Dec (GL-O, GT) at Los Muelles, Cataño, Puerto Rico, while a Great Black-backed Gull was also noted (GT). A Sandwich Tern made an unseasonable appearance along the South Shore, Bermuda from 16–25 Dec (AD). A Forster’s Tern was reported on 12 Jan (GL-O) at Muelle Boca Morena, Mayagüez, Puerto Rico.

The first returning White-tailed Tropicbird in Bermuda was seen at Challenger Banks on 14 Jan (KW) and the first arrived along the coast at Port Royal GC on 9 Feb (CG). Bermuda’s first Northern Fulmar was photographed (CB) at Challenger Banks on 8 Jan (CB, KW). A Black-capped Petrel was reported on 31 Jan (MG) while sailing SW of Cayo Largo, Isla de la Juventud, Cuba. A Cory’s Shearwater was reported on 20 Jan (KO) off Bimini from a cruise ship from Cuba. “This bird was about the size of a RBGU with a longer slightly tapered tail, uppersides all gray (not black) with no white or obvious patterns, all white below with some of gray onto the sides of the neck”. Up to nine Manx Shearwaters were seen and photographed on 14 Feb from a boat in Exumas Sound, east of Highbourne, Exuma and Black Point at close range (BP). BP commented, “Two pairs and five singles, all flushed from water in front of boat. All but two flew a short way north or south and landed. After landing, the few I could see appeared to have their heads in the water looking for fish. Winds had been 20 knots from the east the previous 3 days. All showed white under tail.” A Northern Gannet seen and described in detail on 10 Dec (AJ) from waterfront, during strong 20+ knot winds after a major cold front at Hotel Comodoro, La Habana, Cuba. A Northern Gannet was found alive on Wreck Road, Bermuda on 8 Jan (ADa). It was taken to the BAMZ rehab facility but died overnight. A second adult was in St. Georges from 8–21 Jan (LG). A Double-crested Cormorant was photographed on 21 Jan (BD, LR) at Cabo Rojo, Puerto Rico. A Little Egret was reported from Green Turtle Cay Sand Spit, Hope Town. Central Abaco on 30 Dec (EB, MK) who noted the “greenish-gray lores on this egret.” The 2nd Eurasian Spoonbill for Barbados that arrived in Nov 2017 (JJM) remained through the winter season.

The sporadic appearance of a Black Vulture was reported from 1–3 Dec (DM, R”C”B) and photographed at Freeport Pine Ridge Landfill, Grand Bahama. A Sharp-shinned Hawk was seen (AR) on 21 Jan at Los Arroyos, Sud-Est, Haiti while another Sharp-shinned Hawk was noted (PL) on 20 Feb chasing prey at Jay’s Guest House, Saint Thomas, Jamaica. A Short-eared Owl was noted on 13 Dec (S-JS) at Quintas de Cupey, San Juan, Puerto Rico. A Peregrine Falcon was seen at various locations, Bermuda from 11 Jan–15 Feb (EH, JH).  A Philadelphia Vireo was a good find at Silver Hill Cottage, Saint Andrew, Jamaica on 12 Dec (RM, LJ, et al. reported weeks earlier). A Yellow-throated Vireo wintered in the Arboretum, Bermuda from 15 Dec–23 Feb (AD, AMD, and FD). Two Fish Crows were reported and photographed on 23 Dec (DM) at West End, Freeport, Grand Bahama, where “One was seen flying east and another on a boat further west a few minutes later.” Multiple observers reported (ph.) an American Crow on 6 Jan near Ginn GC, West End, Freeport, Grand Bahama (MG, CH, EG and ADu), Thinking it was a Fish Crow, they played that species call but was ignored, then American Crow tape. The bird became agitated and flew from perch towards the observers and circled once before landing on another perch further away!” Two Cuban Martins were seen on 10 Feb (S-JS) at Cataño, Puerto Rico, while another was noted on 15 Feb (JS) at Las Charcas Valdez, Arecibo, PR. A Cave Swallow ‘showing a distinct buff band around neck, and chestnut forehead and dark crown.” was confirmed via photograph on 5 Dec (MA) at Ragged Island, Ragged Island, Bahamas. A Gray Catbird was noted on 12 Feb (PWo) at Head of Barkers, Vidal Cay, West Bay, Grand Cayman. Another Gray Catbird was reported 17 Feb (DT) at Negril Royal Palm Reserve, Westmoreland, Jamaica. The threatened endemic La Selle Thrush was heard calling on 21 Jan (JG) at Kaskad, Ouest, Haiti.

Bicknell’s Thrush in the West Indies is primarily known for its winter haunts on Hispaniola. Apart from occasional birds straying from this major wintering area, sustained reports from Puerto Rico are, to say the least, important for this endangered thrush. To wit, three birds were noted on 16 Feb (GL-O) at Cerro Jayuya, Ponce, Puerto Rico, where one bird was seen and two were heard. On 17 Feb, two of the birds were heard (GT) at Km 18.9, Ponce. On 21 Feb four Bicknell’s Thrush were reported at Cerro Jayuya, where JS saw “one and heard three different birds herd calling responding to play back during point count” (PS). Investigations continued for a week when PS surveyed Cerro Punta, Jayuya on 23 Feb when one bird responded to playback during a point count.

A steady build up American Pipits increased from eight at Cooper’s Is., Bermuda on 6 Jan to 78 at Kindley Field on 5 Feb (PW). A Lincoln’s Sparrow was reported (ph.) on 28 Dec (CM) at Blue Mountains NP, near Mt Horeb Estate, Hardwar Gap, Saint Andrew, Jamaica. Another Lincoln’s Sparrow was found on 23 Feb (JS) at Cerro Punta, Jayuya, Puerto Rico. A Clay-colored Sparrow photographed on 29 Dec–5 Jan (KMK, CJ) was found and responded to taped calls at Big Bird Chicken Farm, Central Abaco, Hope Town and Green Turtle Cay, Bahamas. Three Clay-coloreds were photographed (BM) on 13 Jan at Garden of the Groves, Freeport, West Grand Bahama. A Grasshopper Sparrow was photographed on 5 Jan (BH) at Owenstown IBA, North Andros, Bahamas. A late Bobolink was at Bermuda Airport on 6 Dec (PW). Two Orchard Oriole (ph.) were present from 19–20 Jan (JA, GP) during a banding operation at Bosque de Jagueyes, Salinas, Puerto Rico. A Red-winged Blackbird was at Spittal Pond, Bermuda from 6–14 Jan (TW). A Brown-headed Cowbird appeared at Garden of Grand Bahama Birders B&B, Freeport, Grand Bahama on 20 Jan (EG). Three Brown-headed Cowbirds were at Outerlea Farm, Bermuda from 9–17 Jan (MO). A surprising find was a Great-tailed Grackle on 4 Jan (JS, KA, SO) at Puerto Arecibo, Puerto Rico, while another was reported on 16 Jan (CH) at Kingston Airport, Saint Andrew, Jamaica. Of 20 species of wood warbler recorded during the season in Bermuda, Tennessee Warbler was the most unexpected, seen at the Arboretum until 24 Feb (AD). A male Hooded Warbler was discovered at Monts Caraïbes, Guadeloupe on 2 Feb (AL). In Bermuda a record number of wintering Summer Tanagers (at least five) were seen at the Arboretum (two) from 9 Dec–28 Feb+ (AD), Ferry Point (two) from 2–27 Dec (PW), Coney Is. on 14 Jan (NM) and Warwick on 25 Jan (SC). A Dickcissel was seen (ph.) on 14 Jan (Gabriel Lugo-Ortíz) at town of La Parguera, Lajas, Puerto Rico. 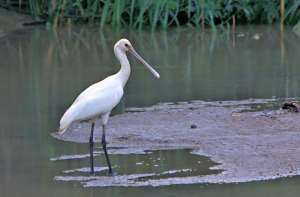 The second record of Eurasian Spoonbill for Barbados. First seen 30 Nov 2017, it was present throughout the winter period. Photographed here at Belleplaine, St. Andrews on 3 Dec. Photo © John Webster. 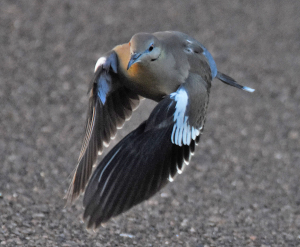 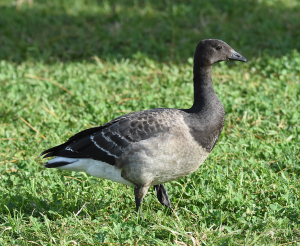 Brant Geese are very rarely seen in Bermuda. Two were present during the winter period including this one photographed 9 Dec 2017 in Shelly Bay Park. Photo © Andrew Dobson. 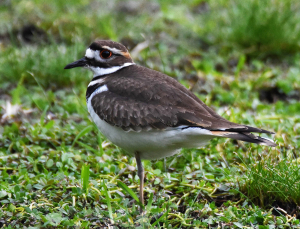 An estimated 1.000 Killdeer arrived in Bermuda 5–6 Jan as a result of Storm Grayson in the northeast US. The was the highest number ever documented. This bird photographed 6 Jan 2018 was one of about 500 at Bermuda Airport. Photo © Andrew Dobson. 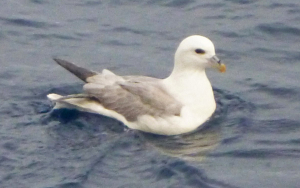 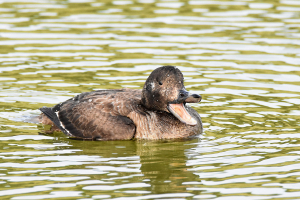 This White-winged Scoter was only the sixth record for Bermuda and the first to offer good photographic opportunities. Photographed here on 8 Feb 2018, it was present 8-10 Feb. Photo © Andrew Dobson. 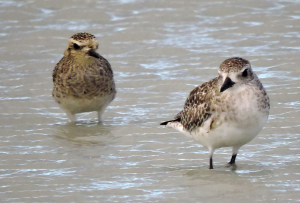 This stunning Pacific Golden Plover had been at Christchurch, Barbados since May 2017. On 25 Feb 2018 it was joined by a second one and they stayed together until March. Photographed here 21 Feb 2018. Photo © John Webster.