Highlights of the season in Bermuda included: the first breeding of Roseate Terns since the 1840s, the third record of Black-bellied Whistling-Duck, and another record-breaking number of Cahow chicks.

A Black-bellied Whistling-Duck was photographed at Port Royal GC, Bermuda on 3 Jun (EB) and remained at Somerset Long Bay NR through 31 July+. A male Gadwall was a surprise arrival at Spittal Pond, Bermuda on 23 May (PW). A possibly injured Ring-necked Duck continued at West Bay, Grand Cayman from 9 Jun–28 Jul (DS). Three Lesser Antillean Swifts were noted 4 Jun (FDD) at Parc National de Guadeloupe. Black-necked Stilts at Spittal Pond, Bermuda increased to 6 birds 12–17 June (AD, PW) with two birds remaining to 15 Jul. The first fall shorebird in Bermuda was a Willet over the Great Sound, Bermuda on 12 July (AD). A South Polar Skua was photographed at Challenger Banks, Bermuda on 20 May (KW). The leg band showed it had been banded on 30 Jan 2017 as a non-breeding bird on Fildes Peninsula, King George Island, Antarctica. A Least Tern was in the Little Sound, Bermuda on 15 Jul (EH). A Black Tern was a rare sighting in Barbados at Pile Bay, St. Michael on 2 Jul (JMo). A pair of Roseate Terns nested on Pearl Is and raised a single chick; the first breeding in Bermuda since the 1840s. First noted on 22 May, the chick fledged on about 16 Aug (DBW). In Bermuda, four pairs of Common Terns produced two chicks each, with all of them nesting on human-made structures (DBW, MM). A Royal Tern was at The Causeway, Bermuda on 11 May (PW). Eight Wilson’s Storm-Petrels were seen 23 Jun (JH) at Castaway Cay, offshore, South Abaco and Moore’s Island, Bahamas. The Cahow breeding season in Bermuda produced another record-breaking year with 124 pairs and 71 hatchings (JM). Cory’s Shearwaters were reported (ph) two on 6 Jul and one on 10 Jul (GQ) off Freeport Harbor, Grand Bahama during voyages on the Balearia Ferry. A Great Shearwater was seen (ph. confirmed by EB) on 7 Jul (CJ) at Goulding Cay Wild Bird Reserve IBA, New Providence, Bahamas. Four Great Shearwaters were seen on 1 Jul (FDD) at Saint-François, PDC seawatch, Guadeloupe. A Little Egret was seen (ph.) on 18 Jun (LY) and on 22 Jul (SF) at Southgate Pond, Saint Croix. A Striated Heron was reported on 3 Jun (JW) at Sustainable Barbados recycling pond Saint Thomas, Barbados. A Scarlet Ibis found on 14 Jul (MW fide DG) at Culebra marked the expansion of this introduced species in the British Virgin westward through to Puerto Rico as well as south to Antigua. 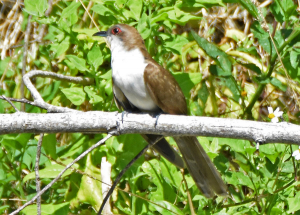 Black-billed Cuckoo is a scarce visitor to Bermuda. This bird was present for one day at Spittal Pond and photographed there on 17 Jun 2018. Photo © Andrew Dobson. 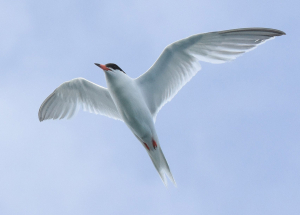 One of a pair of Roseate Terns which nested and raised one chick on Pearl Island, Great Sound, Bermuda. This was a very significant event being the first breeding in Bermuda since the 1840s. Photo © Andrew Dobson.