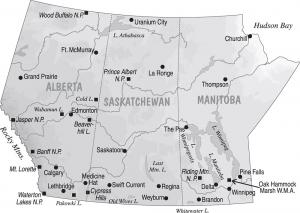 While much of the north of the Prairie Provinces region was wetter and cooler than normal, the south saw the opposite conditions. From southeastern Alberta through southern Manitoba, extremely dry conditions existed. July was the fourth driest on record in southeastern Alberta, while the first six months of the year were the driest ever in southern Manitoba. In the latter region, there was some relief in the form of rain in the first half of July. Many marshes, sloughs, and lakes either completely or largely dried up, resulting in depressed numbers of breeding grebes, waders, and species reliant on damp grass and sedge meadows. Breeding Bird Atlas work in Saskatchewan, now in its third field season, turned up some fine rarities and provided extensions of known breeding ranges for a number of species. Cold conditions at Churchill, Manitoba, in early June resulted in a completely frozen river mouth, which led to lower-than-usual daily lists and a lack of real rarities for visiting birders.

After nearly 30 years of co-editing the Prairie Provinces Region for North American Birds, Peter Taylor has decided to step down. During these decades he has strived to keep the reports concise, readable and error-free, enlivening them at times with his dry wit. Christian Artuso will step into the role of co-editor, at least for the time being. Thank you, Peter, and welcome aboard Christian.

Accompanying a flock of Canada Geese near Deleau, MB 21 Jul were 19 Snow Geese, a Ross’s Goose, and a Greater White-fronted Goose, the latter two species quite rare in summer (AH, RP). Another Ross’s Goose was at Muddy Lake, SK 12 Jun (DB). The only ducks of note were an American Black Duck at Elkwater Lake, Cypress Hills P.P., AB 2 Jun (ph. MS) and two male Barrow’s Goldeneyes, with two unidentified female goldeneyes, at Cypress Lake, SK 12 Jun (DW). At the latter lake, 1,200 Eared Grebes were tallied the same day, providing one of the few notable grebe counts in the region (DW). Multiple sightings of a Band-tailed Pigeon up to at least 16 Jun were made at a feeder at Douglas P.P., SK (BD). A White-winged Dove found during a breeding bird atlas survey in the Weyburn area 9 Jul provided Saskatchewan with its fifth record (ph. LK). Although Common Poorwill is known to occur in extreme sw Saskatchewan, it is rarely reported. One was heard near Maple Creek 6 Jul (BdL), while just across the border one was at Cypress Hills P.P. 13 Jul (DM). Three Vaux’s Swifts were seen along the Crowsnest Highway, AB 4 Jul (DB). Although there have been numerous sight records over the years, the species is still awaiting confirmation to be accepted on the Alberta list. A female Black-chinned Hummingbird visited a feeder at Hillcrest Mines, AB off and on during the summer (ph. PL, m. ob.).

At Whitewater, MB, one of the few areas with suitable shorebird habitat, tallies of 2015 Stilt Sandpipers, 824 Pectoral Sandpipers, 2794 dowitcher sp., and 795 Greater Yellowlegs 28 July were notable (CA, EM, JS). A Willet at Churchill 11 Jun was extremely rare (EN et al.). Also in early June Little Gulls and Sabine’s Gulls were reported at Churchill, but outstanding gull rarities were missing this year. Out-of-range waders included a Great Egret at Buffalo Lake near Red Deer, AB, where the species has now been noted for five consecutive years (ph. HG, m. ob.), and a Green Heron at Regina, SK 10 Jun (GFy). Just a few years ago, hundreds of Cattle Egrets and White-faced Ibises could be found at Whitewater Lake; this year there was not a single report of Cattle Egret and only a handful of ibises were noted (m. ob.). A Lewis’s Woodpecker visited the same yard as the Black-chinned Hummingbird on 31 Jul; three birds were seen nearby in fall 2018 (ph. PL). Also rare in Alberta were single Red-headed Woodpeckers at Vauxhall 2 Jun (ph. CS) and at Red Deer 23 Jun (HF). A female Red-bellied Woodpecker was a good find near Prince Albert, SK 15 Jun (ph. BGo).

An Ash-throated Flycatcher at FortWhyte Alive, Winnipeg became Manitoba’s 400th species. It was ably identified by Matt Gasner on 13 Jul and subsequently seen and photographed by many until at least 23 Jul. Eastern Bluebirds were more prominent than usual in Alberta, with two nesting pairs in the Cypress Hills (ph. GFx, m. ob.), one nesting pair near Ardmore 16 Jun (ph. RKl, m. ob.), and a female that raised young with a Mountain Bluebird nw of Edmonton 19 Jul (VC, m.ob.). A Varied Thrush was rare at Regina 12 Jun (GF), as were a Northern Mockingbird at Ardenville, AB 5 Jun (ph. MKe) and another mocker in the Weyburn area 9 Jul (DSa, BL). Lark Buntings have been all but absent in Manitoba in recent years, but a late May sighting was followed by a bird at Dunnotar 2 Jun, both unusually far east (well away from where this species has nested in Manitoba) (LBS). Field Sparrows were at Bird’s Hill P.P., MB 4 Jun (AD), at Hadashville, MB from 16 Jun to at least 21 Jul (WC, MW, m. ob., ph.) and for at least a week up to 7 Jul at the Borderlands Lookout near Maple Creek (GFy). An out-of-range Timberline [Brewer’s] Sparrow was banded at Ft McMurray, AB 10 Jun (ph. KW), while an out-of-season Harris’s Sparrow was at Altona, MB 3 Jul (ph. BGi). An Eastern Towhee at Ekapo Lake, SK 5 Jul was west of its usual range (DW).

Rare parulids included a Hooded Warbler at Riding Mountain N.P., MB 6 Jun, about the 20th for the province (CA), a Cape May Warbler at Churchill 10 Jun (BC et al.), the third for the location, and a Black-throated Blue Warbler at Beaverhill Bird Observatory near Tofield, AB 4 Jul (ph. SPM). A Scarlet Tanager at Trochu, AB 15 Jun was about the 21st for the province (ph. MH). Another one near Melville 26 Jun was closer to its normal range (ph. DW). Churchill’s third Western Tanager was photographed on 14 Jul (MKu); it was seen again two days later. Northern Cardinals are ever-so-slowly expanding their range northward onto the Prairies. In Alberta there were reports from Sherwood Park, West Edmonton, and Bon Accord (m. ob.), in Saskatchewan from Prince Albert (ph. KD), and in Manitoba from several locations, including three in one area of Winnipeg (RKo). A male Lazuli Bunting at Kildonan Park, Winnipeg, present for most of June, occupied exactly the same territory as a bird did in 2017 (fide CA, m.ob., ph.). An Indigo Bunting at Moose Mountain P.P., SK 12 Jun was at the western edge of its range (DSa); much farther west was one at Lily Lake, near Opal, AB 13 Jun (ph. AV). Reports of hybrid Lazuli Bunting x Indigo Bunting came from Calgary, AB 6 Jun (ph. AT) and two locations in Winnipeg: 31 May to 12 Jun (AJ, LP, DSc) and 26 Jun (RC).

Photos–Prairie Provinces region, Summer 2019
Hover or click on each image to read the caption. 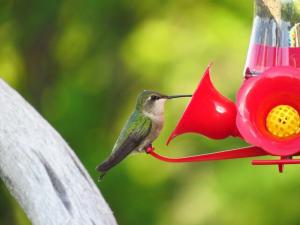 The Black-chinned Hummingbird is an occasional visitor to Alberta. This female was at Hillcrest Mines during the summer of 2019. Photo by © Pat Lucas. 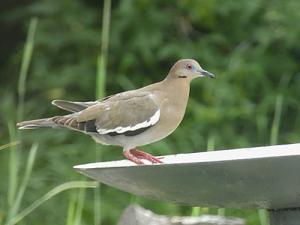 This White-winged Dove was found in the Weyburn area of Saskatchewan on 9 July 2019 during breeding bird atlas surveying. It represents the fifth record for the province. Photo by © Laurie Koepke. 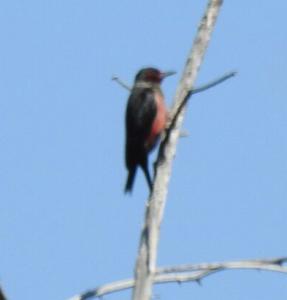 Found in the same Alberta yard as a Black-chinned Hummingbird, this Lewis’s Woodpecker visited on 31 July 2019. Photo by © Pat Lucas. 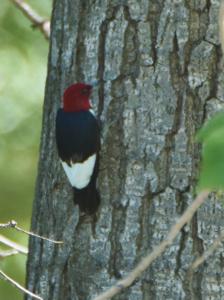 A good find near Vauxhall, Alberta on 2 June 2019 was this Red-headed Woodpecker. It was one of two birds recorded in the province this summer. Photo by © Colin Starkevich. 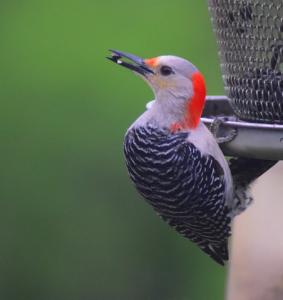 This female Red-bellied Woodpecker in the Prince Albert, Saskatchewan area on 15 June 2019 was well north and west of the usual range. Photo by © Bob Godwin. 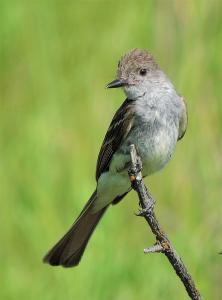 Manitoba’s 400th species, in the form of this Ash-throated Flycatcher, was provisionally (and correctly) identified by Matt Gasner at FortWhyte Alive, Winnipeg on 13 July 2019. It lingered in the area until at least 23 July and was seen and photographically documented by many. Photo by © Nicole McPherson. 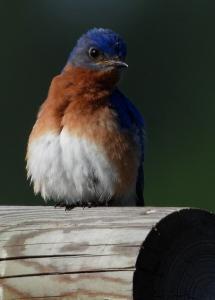 Eastern Bluebirds were more prominent than usual in Alberta during the summer of 2019. This male was near Ardmore on 16 June. Photo by © Richard Klauke. 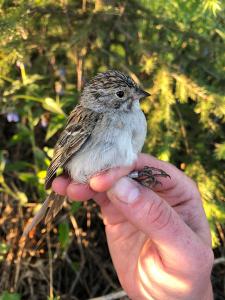 This Timberline [Brewer’s] Sparrow at Ft. McMurray, Alberta on 10 June 2019 had strayed well north and east of the breeding range. Photo by © Kim Wetten. 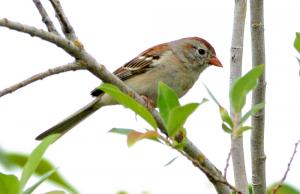 This Field Sparrow was present for about a month between mid-June and mid-July 2019 (here 24 June) in the Hadashville, Manitoba area. Photo by © Garry Budyk 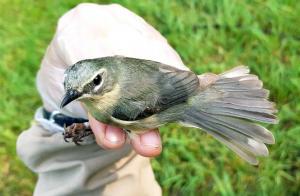 One of the rarest Prairie Region birds of the 2019 summer season was this Black-throated Blue Warbler captured and banded at Beaverhill Bird Observatory on 4 July. Photo by © Sara Pearce Meijerink. 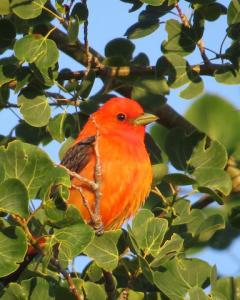 This Scarlet Tanager near Melville, Saskatchewan was nicely captured on film on 26 June 2019. Photo by © Don Weidl. 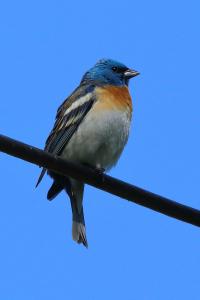 This male Lazuli Bunting was present from 5 June until at least 30 June 2019 at Kildonan Park, Winnipeg, Manitoba, the exact same location where a male was during summer 2017. This is well east of the species’ usual range in the region. Photo by © Bob Shettler. 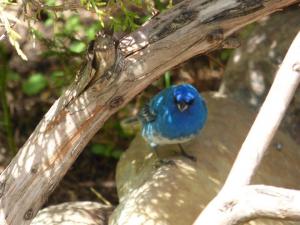 This hybrid Lazuli Bunting x Indigo Bunting male at Calgary, Alberta on 6 June was one of at least three reported during the summer of 2019. Photo by © Agnes Toth. 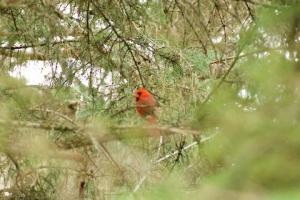 Northern Cardinals are ever so slowly expanding their range in the Prairie Provinces. This male was at Prince Albert, Saskatchewan on 26 July 2019. Photo by © Kathleen Dvorak. 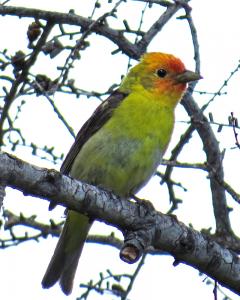 Churchill’s third Western Tanager was found at Akudlik on 14 July 2019. It was also seen by others two days later. Photo by © Mark Kubisz.