A 1,000-Kilometer Journey to the Wintering Grounds

It was late afternoon on Aug. 16, 2005, at Prince Leopold Island in Nunavut, home to one of the largest seabird colonies in the Canadian High Arctic. From our inflatable zodiac, we looked up at sheer cliffs rising 250 meters (70 stories) above Lancaster Sound. Breeding Thick-billed Murres were packed together on narrow ledges. As these black-and-white seabirds came and went, they filled the air with their raucous cries.

We watched with suspense as, every few minutes, a tiny, young Thick-billed Murre threw itself off a lofty ledge and fluttered to the sea below or floundered onto rocks, where Glaucous Gulls and a polar bear patrolled the beach. As each fledgling landed on the sea, it uttered plaintive piu piu cries to contact the male parent that accompanied it on its first downward flight. If the two became separated, the cries helped them locate each other. The successful reunion of adult with young is the beginning of a long swimming migration that covers up to 1,000 km from Prince Leopold Island to ice-free waters in the Davis Strait off the west coast of Greenland.

The Prince Leopold Island cliffs are where the great swimming migration for many Thick-billed Murres begins. Glaucous Gulls, a predator of the murres, and Black-legged Kittiwakes are also visible. Photo by © Jean Iron.

A sense of wonder has stayed with me since seeing those Thick-billed Murre chicks jump at Prince Leopold Island on my first expedition cruise to Nunavut, as well as on subsequent trips until the most recent one in Aug. 2019. I have seen this also at the most northerly Canadian Thick-billed Murre colony on Coburg Island, at Cape Hay on Bylot Island, and at Akpait National Wildlife Area on the northeast side of Baffin Island. Akpait is the Inuktitut word for “murres.” Knowing about the life events that precede the youngsters’ awesome leaps help us appreciate why a fledgling undertakes this remarkable swimming migration with its male parent. 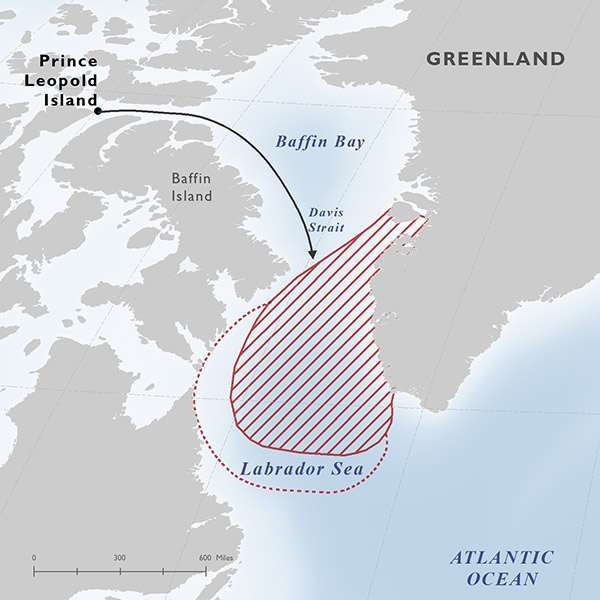 This map shows the path of the great swimming migration and wintering area of Prince Leopold Island Thick-billed Murres. The core wintering area lies within the red-striped area. Birds may extend to the red dots, depending on the ice cover. The west coast of Greenland generally remains free of ice, influenced by Atlantic water moving northward. The extent of sea ice in Davis Strait and the Labrador Sea varies substantially from year to year. Map created by Kei Sochi, with thanks to Anthony Gaston for providing valuable input.

About three weeks before a young Thick-billed Murre jumps, it hatches from an egg laid on a high, narrow ledge crowded with neighboring Thick-billed Murres. Both male and female parents share rearing duties, their day divided into 12-hour shifts, one parent searching up to 100 km away for food, while the other keeps the chick warm and protected against marauding predators. As fledging time approaches, the male parent stays home more often and synchronizes his shift to be ready for the peak jumping time from 4pm to 2am, coinciding with the period of lowest light from late afternoon into the night. The midnight sun sets for the first time between Aug. 11 and 12.

At the time of fledging, the chick has grown to one quarter of the parent’s size and looks like a miniature adult, though its wings are not yet fully developed. A new coat of waterproof feathers has replaced fluffy down. Some chicks resemble adults in summer plumage, with a black chin and throat, while others resemble adults in winter plumage, having a white chin and white on the side of neck. The chick is small and fat, able to maintain its body temperature well enough to survive in cold Arctic waters.

Thick-billed Murre chicks undertake the great swimming migration with their fathers. Researchers are not sure why chicks are accompanied by their fathers and not their mothers. Photo by © Jean Iron.

Together, father and chick undertake a remarkable swimming migration to their wintering grounds off the west coast of Greenland, far from the natal cliffs of Prince Leopold Island. Using the low light of their first night, they swim as far from the colony as possible to evade aerial predators such as Glaucous Gulls. The ocean currents help them as they move rapidly eastward in Lancaster Sound, then south in Baffin Bay. They have little more than a month to swim out of Lancaster Sound to avoid being trapped by ice, which may form as early as October.

For the first five to six weeks, the chick cannot fly or find its own food. Yet, it grows strong while being fed by its male parent. At this time, for several weeks, the adult is also flightless while molting all its flight feathers synchronously as part of the complete molt into winter plumage. Father and young stay together until the young can fly and hunt its own food. This incredible feat of long-distance migration by a young bird occurs while it is still unable to fly and not yet fully developed.

A male Thick-billed Murre accompanies its chick. During the great swimming migration, chicks are unable to fly or find their own food, yet they grow stronger with the help of their male parents. Photo by © Jean Iron.

Some Thick-billed Murre chicks resemble adults in summer plumage, with a dark chin and throat. Photo by © Jean Iron.

Other chicks resemble adults in winter plumage, like this one with a white chin extending toward the neck. Photo by © Jean Iron.

This Thick-billed Murre father is accompanied by three chicks! Photo by © Jean Iron.

As if to emphasize how young Thick-billed Murres are when they begin their swimming migration, this chick still has some fuzz. Photo by © Jean Iron.

I asked Thick-billed Murre researcher Anthony Gaston why the male and not the female accompanies the young. He said the reason is not known. One theory is the female puts more effort into feeding the young in the later stage of its growth on the ledge and needs a break. After the young fledge, females take off on their own southbound migration.

The pressures of a brief Arctic breeding season, an unpredictable environment, and the tremendous energy involved in adults feeding young have likely contributed to the short time from chick hatching to fledging. The youngsters finish growing while swimming to their wintering grounds south of the pack ice. These young Thick-billed Murres remain at sea for the next two to three years before returning to Prince Leopold Island, where lucky observers may have the chance to glimpse these remarkable birds begin the great swimming migration again. 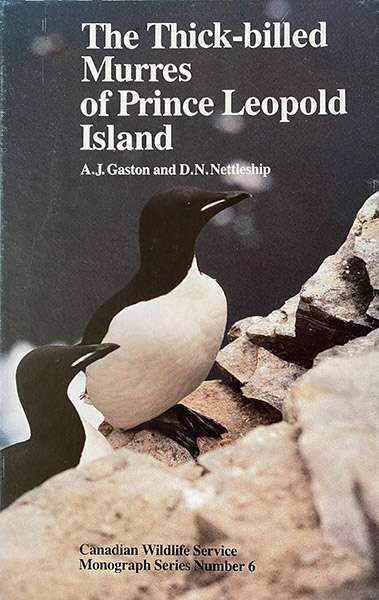 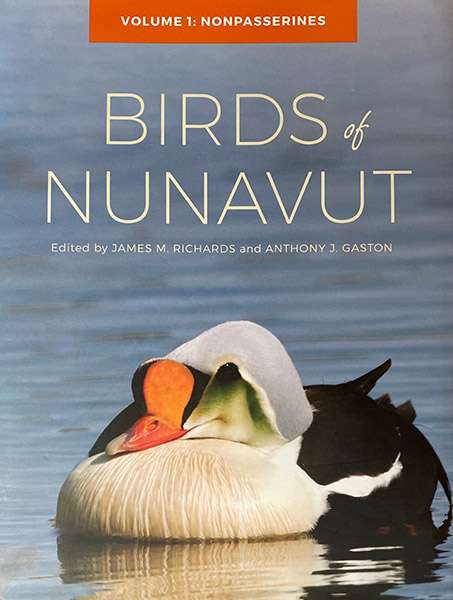 To learn more about Thick-billed Murres, their swimming migration, or the birds of the Canadian Arctic, check out these books.

Anthony Gaston has researched Thick-billed Murres in the Canadian Arctic for over 45 years and written extensively about them. I thank him for information and for answering my questions. I am grateful to Quest Nature Tours of Toronto for opportunities to visit Nunavut in the Canadian High Arctic and share these magnificent seabirds with others. 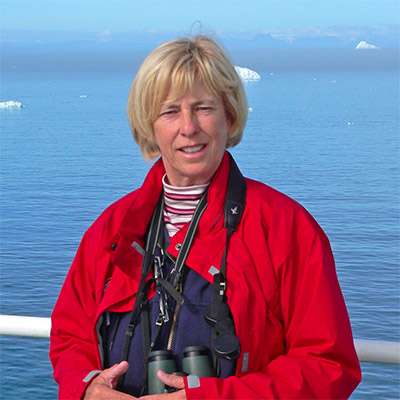 Jean Iron is a well-known Ontario birder, a former president of Ontario Field Ornithologists, and recipient of their Distinguished Ornithologist Award. Jean has a passion for Arctic birds, and, as an expedition leader for Quest Nature Tours to Canada’s High Arctic, she has observed Thick-billed Murres many times at their nest cliffs.

This article first appeared in the Apr. 2022 Birding, pp. 22-27.
All ABA members receive Birding magazine 8 times per year, plus a wealth of other benefits.
To join the ABA, click here >>

What an incredible natural history strategy! Fascinating that the father and his young share the experience of flightlessness along their long swimming journey south. It strikes me as one of the best examples of efficiency and coordination (i.e., conservation of time and energy while safely and successfully accomplishing the needed work of molt and migratory movement) of any avian parent-offspring relationship. Absolutely fantastic! Thanks, Jean, and kudos, Anthony!