by Claudia Wilds[originally published in Birding, Volume 26 No. 1, February 1994]

If you ask the founding fathers what the birding scene was like before ABA, they present a world heavily dependent on friends and friends of friends and marked by a lack of information available to most birders about finding birds or identifying the difficult ones. 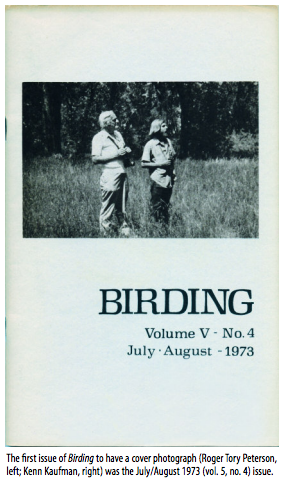 The field guides by Roger Tory Peterson, Richard H. Pough, and Chandler S. Robbins et al. were available by 1968, but the only bird-finding books available were O.S. Pettingill’s two guides to bird-finding, east and west of the Mississippi, respectively, and The Bird Watcher’s America, a compendium of contributions by local experts that Pettingill had edited. The single rare-bird alert was the Massachusetts Audubon Society’s Voice of Audubon. Local bird clubs were flourishing, and new ones were springing up.

Birders were inspired and entranced by Peterson’s early compendium of birding experiences, Birds over America, and by his and James Fisher’s classic tale of their Big Year, Wild America. Birding skills could be learned or enhanced by memorizing Joseph Hickey’s Guide to Bird Watching and Ludlow Griscom’s Modern Bird: Study. James A. Tucker had just published his Combination List, based on the 1957 AOU Check-list. Articles about birding as a serious sport were sometimes published in Audubon, like the one by Stuart Keith on the “600 Club” in 1963 that helped stimulate interest and competition among birders, but the focus of that magazine was quickly turning toward conservation issues and away from birds and birding.

If you knew how to play the game, when you planned a trip into unknown birding territory, you wrote to the regional editor of Audubon Field Notes (AFN), the predecessor to American Birds, for the area you were planning to visit, or you made contact with Christmas Bird Count compilers or Audubon Society chapter presidents. Local refuge managers and park superintendents who knew something about birds could sometimes be of help. But mostly you tried to establish or strengthen your personal network, trading names and corresponding with other dedicated birders. If you were inexperienced or lacked confidence or connections, you were out of luck.

Jim Tucker, who had been AFN sub-regional compiler for central Florida and president of his local Audubon Society chapter, though gregarious and well connected, felt isolated when he moved to Texas in 1968. The two hats he had been wearing in Florida had set him to thinking about the void between scientifically oriented ornithological literature and magazines aimed at conservationists. As an avid birder, he conceived a journal and an organization focused entirely on birding for fun, partly for its own sake, as a way for birders all over the continent to connect with each other, and partly as a subtle but inevitable lure to get more people involved in the conservation movement.

In December 1968, he sent a dozen birding friends the only issue – Volume 0, Number 0 – of The Birdwatcher’s Digest. In this flier on white paper with turquoise ink he proposed that they form a group to exchange birding information and publish their list totals. The recipients responded with a flood of suggestions and long lists of other names and addresses.

The first suggestion, made by Stuart Keith, was to change the name of the newsletter to Birding. Volume I, Number 1 was dated January-February 1969 – six 8.5 x 11 inch sheets typed on one side, folded in the middle, with the masthead and other graphics created from sheets of press-type. It consisted of a manifesto of intentions and objectives, a description of a bird-watcher, a financial policy statement, and three pages of lists: the names of birders with the top ten AOU Area lists, the top ten world lists, the top ten state lists by percentage of possible state totals, the top three listers for each state, and a complicated interstate score achieved by treating all of Canada as a single state. All of these lists involved the names of only eleven participants. By the second issue the organization had a name, the American Birding Association, and the terms birder, birding, and bird-watcher had lighthearted new definitions. Jim Tucker was editor from the beginning. 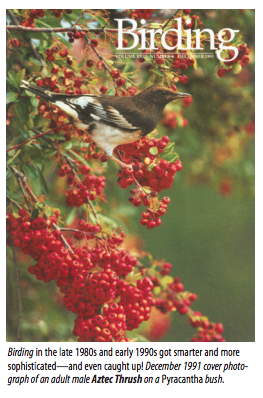 The next few issues were devoted to lively discussions of what the association and its publication should focus on, as well as an abundance of lists. An early consensus was reached that ABA would devote itself to promoting the hobby and sport of birding and would leave scientific contributions and conservation efforts to other organizations. To ensure that its direction would not be subverted, turning the organization into an armchair-bird-watchers’ society or a conservation lobby, an elective membership policy was instituted, in imitation of that of the AOU. No matter how large the association grew, only 150 elective members would exist, and they would be the only ones to vote for the board of directors. To be nominated or to nominate oneself as an elective member, a regular member had to have an ABA Area list of 500 or at least one state or province list with 70 percent or more of the official total, and then be elected to the roster by current elective members; alternatively the directors could elect someone who had made major efforts to help the organization. Only elective members could become directors. This arrangement lasted twenty years. When it ended, a campaign to include conservation goals as major ABA objectives was successful.

Aside from this effort to control the focus of ABA, the early leaders did not have a specific plan for the organization. Membership was open to everyone without qualification, and no one had any idea how many people would be attracted. Decisions on the directions in which the association “should” evolve were made as time went on and as membership projections kept growing. During these early years, ABA was the magazine; there were as yet no ABA Sales, no conventions, no newsletter, no other publications, etc.- Birding was ABA.

The first officers of ABA were its most diligent and enthusiastic organizers: Stuart Keith as president, Arnold Small as vice-president, Jim Tucker as secretary and treasurer, together with seven “members-at-large”: Marjorie Adams of Texas, Charlie Clark of Illinois, Olga Clarke of California, David Easterla of Indiana, Bill Harrison of Arizona, Guy McCaskie of California, and Robert Smart of New Hampshire. Within months Bob Smart had become second vice-president and Joe Taylor had become treasurer. In 1971, the position of membership chairman was created to cope with swelling enrollment, and Benton Basham, as the person perhaps most responsible for ABA’s growth, then and for years to come, was appointed to fill it.

By the fifth issue of Birding (September — October 1969) 115 members had joined ABA (for an annual fee of $3 and a life membership of $50, a bargain that lasted only one more year). By the eighth issue there were 322 members, with California and Texas accounting for 30 percent of the total. By the tenth issue, with more than five hundred members enrolled, an editorial asked, ‘Will success spoil ABA?”

Most of the early debates in Birding concentrated on listing matters: the countability of introduced species, heard birds, identifiable forms, and birds not independently found or identified by the lister; whether ABA should follow AOU taxonomy and standards for accepted records or should have its own checklist; and ways to insure list integrity, possible awards for high list totals, and field trials to test birding skills. Almost none of these issues were settled in the first few years (and some are still in dispute), but they were all raised. The ABA Checklist Committee, initially chaired by Arnold Small, and the Listing Rules Committee, headed (as it still is) by Robert Pyle, submitted their first reports in the last issue of Volume 2.

At the same time more substantive material was creeping in. The first book review, of Birds of Northern California, by Guy McCaskie and Paul DeBenedictis, came in the fourth issue. The first bird-finding inserts began with the second volume, the first identification piece (Pale-footed Shearwater) in Volume 2, Number 2. Requests for members’ thirty most-wanted birds produced a list of the top forty species and then, over many issues, information on where to find most of them. The first debate over collecting began, and the first admonitions about birding ethics appeared. Foreign birding articles were present almost at the start, beginning with a report by Peter Alden (in Volume 2, Number 3) of the twenty-six raptors to be seen along a new road in Venezuela. Reports of first North American records and extreme rarities and of great birding adventures developed from short letters to longer pieces. A paper on the effective use of a cassette recorder was the forerunner of “Tools of the Trade” columns

With the first issue of Volume 3 of Birding in 1971, the publication looked like a real magazine (though still decorated by drawings and cartoons instead of photographs), and the number of pages per issue doubled to forty or more. An IBM Composer provided “real” type for the first time, but it required every line of printing to be typed twice — we were on the cutting edge of desktop publishing even then! On the cover of the last issue of the year was the new ABA logo in full color, designed by Guy Tudor, with the tropicbird soaring across the world in binocular view. And ABA was soaring too.