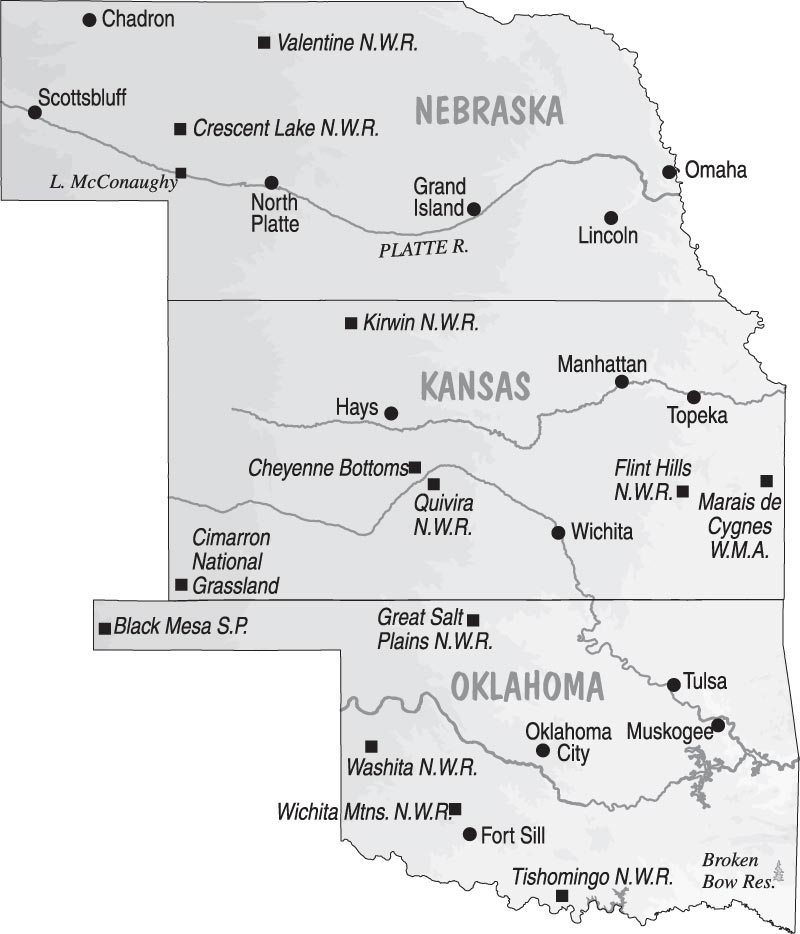 The dynamic influence of changing climate on bird distribution and behavior is a key topic currently; these reports for North American Birds will be a documentary to some of those changes. In the Southern Great Plains, we noted this season an array of late fall departures, along with limited distribution of some northern species. Gulls and some waterfowl showed poorly—apparently, they lingered north longer. Only one Thayer’s Gull was noted, in Nebraska, and there have been no Glaucous Gulls yet. The expected high concentrations of Common Mergansers were not yet forced south by northward freezing waters. Throughout the region, wading species, such as herons, egrets, ibises, and some shorebirds, departed late; so did a variety of landbirds.

There has been a gradual northwestward shift of some southeastern species in the region. This trend continues, though this season less noticeably. Some of the shifts in species maintaining metapopulation dynamics seemed dampened; birds like King Rail, Least Bittern, and Common Gallinule were not regaining ground in marshlands outside the extreme southeastern corner of the region, and even Black-bellied Whistling Duck—a regional newcomer—did not reenter some areas that were lost in the severe 2010-11 drought.

This season provided a strong suite of vagrants, ranging from ABA-rare Jabiru and Common Crane to exceptional regional records like Magnificant Frigatebird, Anna’s Hummingbird, and Hepatic Tanager. Classically, fall is a good season for extralimitals to turn up, and this fall in the Southern Great Plains was no exception.

Black-bellied Whistling Ducks have established themselves in southern Oklahoma; the high count was 19 at Red Slough 23—31 Aug (DA); 4 in Johnston, OK 29 Nov (JRo), were rather late. There were 4 reports of the species in Kansas 27 Aug—8 Nov (fide CO), but none in Nebraska (fide WRS). The only report of the much rarer Fulvous Whistling-Duck was 4 at Hackberry Flat 16 Aug (L&MT). A Greater White-fronted Goose, summer vagrant, was in Kimball, NE 5 Sep (MW, ERa, JR). 2 Tundra Swans, a rare regional migrant, were in Washington, NE 27 Nov (BP), and provided the only report for the region. Surf Scoters were well-distributed 9 Oct—26 Nov, with 20+ in Nebraska (fide WRS), 4 in Kansas (fide CO), and one as far south as Tulsa, OK 25 Nov (JWA). 7 White-winged Scoters at 4 locations 11—28 Nov (fide WRS) were an average Nebraska showing. Black Scoter is the scarcest of the scoters in the region; there were 6 reports from Nebraska and Kansas 25 Oct—26 Nov (fide WRS, CO). Long-tailed Ducks turned up at Cheyenne Bottoms 6 Nov (SS), 2 adult females were in Harlan, NE 26 Nov (LR, RH), and 4 were in Lancaster, NE (SK). Common Mergansers stayed north of the region; by the end of the period, no large numbers had been reported. The pair of Red-necked Grebes at McConaughy 10—27 May and through 3 Sep did not show evidence of breeding (MW, ERa, JR); a molting bird lingered until 17 Oct (JGJ, ERa). A Red-necked Grebe in Creek, OK 27 Sep (SZ) was unexpected. The unusual summering of breeding Eared Grebes at Hackberry Flat continued with 34 noted 16 Aug (L&MT). A Western Grebe in Woodward, OK 12 Nov (CC) was the only fall report for the state.

Inca Doves persist in Lawton, OK and along the southern Oklahoma border; singles were at Red Slough 9 Aug (DA) and in Love 3 Sep (BA), and one was much farther north in Rogers 16 Sep (K&CW). A Common Ground-Dove, rare anywhere in the region, was found in Cowley, KS 13—17 Aug (MT). The 11 White-winged Doves at 6 Nebraska locations (fide WRS) has been typical through the last few summers; the 44 White-wingeds in Great Bend, Barton, KS 3 Sep (RG) was a good tally. Late Yellow-billed Cuckoos were in Chase, KS 16 Oct (DG, DRa) and Adair, OK 26 Oct (PK). Black-billed Cuckoo is declining in the region, and there were only 4 reports in Nebraska and 1 each in Kansas and Oklahoma: Russell, KS rather late 27 Sep (DK), and Washington, OK 17 Sep (MJa).  The highest estimate of Common Nighthawks was 300+ over Milford Lake, Geary, KS 25 Aug (DAk). A Common Poorwill lingered in Dawes, NE until 4 Oct (JLe), as did 3 Chimney Swifts in Sarpy, NE 17 Oct (AR), and a White-throated Swift over Scotts Bluff, NE 21 Sep (AK).

King Rail, which, outside Red Slough, occurs erratically in the region, was noted in Nance, NE 7 Aug (MB), Neosho, KS on 5 Nov (AB), and Hackberry Flat 4 (K&CW) & 30 Sep (L&MT).  Purple Gallinule is now regular at Red Slough, lingering late this year to 1 Nov (DA). In this region, Common Gallinule has a similar distribution to King Rail; the only reports outside Red Slough were in Sarpy, NE 13 Aug (MS) and at Hackberry Flat on 20 Sep (6 birds; L&MT); it also lingered late at Red Slough this season, to 8 Nov (DA). The 10,000 American Coots at Quivira 2 Oct (EY) was one of the highest counts recorded in Kansas. In addition to the several known breeding sites for Sandhill Crane in Nebraska, a pair with 2 colts was seen 20 Aug in Brown (SW).  Oklahoma’s first Common Crane—a mega-rarity for the entire region—was in Texas, OK 17 Nov (DH) with a group of Sandhills. Whooping Cranes moved through the region in standard fashion 24 Oct-25 Nov, with a high count of 40 at Cheyenne Bottoms 12 Nov (BJ). 3 late Black-necked Stilts were in Sheridan, NE 2 Oct (G&DG), and an exceptionally late individual was at Hackberry Flat 11 Nov (L&MT); best counts were at Hackberry Flat with 253 on 9 Aug and 203 on 20 Sep (L&MT). Late Pluvialis at Hackberry Flat included 14 Black-bellied and 3 American Golden-Plovers 11 Nov (L&MT). 163 American Golden-Plovers in Seward, NE 26 Oct (JGJ) was both a high count and a late date; so was the 100 Snowy Plovers at Salt Plains NWR, Alfalfa, OK 5 Oct (GH). Another Snowy Plover, this at Quivira, was exceptionally late 12 Nov (JL).  Piping Plover is a rare migrant in Oklahoma; one was noted at Hefner 7 & 10 Aug (ZP, RM, AS). The only Mountain Plovers reported were 4 in Cimarron, OK 20 Sep (DH).

A late Upland Sandpiper was reported in Payne, OK 5 Oct (TOC). A Long-billed Curlew at Hefner, OK 8 Sep (BD), was easterly; the count of 27 at Hackberry Flat 17 Sep (L&MT) was exceptional. 4 late Marbled Godwits were in Alfalfa, OK to 16 Nov (GH). It seems Ruddy Turnstone is becoming scarcer; the only one reported was at Hefner 24 Sep (RM). Red Knot, a rare fall migrant, was at Quivira rather late on 8 Oct (MR). 38 Buff-breasted Sandpipers tallied in Tulsa, OK 6 Aug (JS) was a low tally for their peak migration period. Buff-breasteds are rare in the western region; 4 were in Hitchcock, NE 25 Aug (JGJ), 4 were in Ford, KS 4 Sep, and 4 were in adjacent Clark on the same date (MG, JC, WCT). A Semipalmated Sandpiper in Canadian, OK 26 Oct (ZP) was late. Only 4 Short-billed Dowitchers were reported during their expected seasonal window: 2 in Nebraska 6 & 13 Aug (PR, JGJ), one in Kansas 4 Sep (MG, JC, WCT), and one at Hefner 8 & 11 Sep (BD, EK). The 14 Long-billed Dowitchers at Quivira 29 Nov (MR) were late for Kansas. An American Woodcock in Sioux 13 Oct (SLu fide JGJ) was only the third record for the Nebraska Panhandle. Joining the medley of late shorebirds were: Spotted Sandpipers in Riley, KS 5 Nov (BS) and Hefner 25 Nov (BD); Solitary Sandpipers in Logan, OK 6 Nov (ZP) and Tulsa, OK 29 Nov (JWA); and Lesser Yellowlegs in Seward, NE 11 Nov (LE), at Quivira (4 birds) 29 Nov (MR), and 27 at Hackberry Flat, a noteworthy count for the late date of 11 Nov (L&MT). A Willet was tardy in Lancaster, NE 5 Sep (SK). A Red-necked Phalarope at McConaughy 16 Oct (ERa) was late for Nebraska; 2 were at Quivira 17 Oct (TM), with 4 reports in northwestern OK (Cimarron, Texas, and Alfalfa) 2 Sep—5 Oct (fide JAG).  A Red Phalarope in Lancaster, NE 22—27 Sep (MB, LE) was regionally rare.

A Black Vulture on the Russell/Ellsworth county line, KS 30 Oct (DK, MR) was a very rare that far northwest; the species is slowly expanding in range, from southwest to northeast, and one in Sumner, KS 6 Oct (EY) fell under that expansion.  A Turkey Vulture in Douglas, KS 19 Nov (LZ), was late, and so was an Osprey in Lancaster, NE 29 Nov (SK).  3 Swallow-tailed Kites were found in Kansas: in Geary 24 Aug (JKt), Johnson 4 Sep (DP), and Butler 7 Sep (BB); 2 were recorded in Oklahoma: Stephens 5 Sep (BA, LA) and Comanche 12 Sep (SHo, JA).  An immature Golden Eagle was easterly in Geary, KS 10 Nov (CO).  An immature Northern Goshawk was photographed in an Omaha, Douglas, NE yard 21 Nov (CHe). A kettle of 75 Mississippi Kites near the edge of their range at Dakota, NE 6 Sep (PR) was notable. Nesting Mississippi Kites in Mitchell, KS 8 Aug (JN) were northerly for the state. Forest buteos westward included a Red-shouldered in Morton, KS 11 Sep (MR) and a Broad-winged Hawk in Lincoln, NE 23 Sep (TJW), as well as another Broad-wing—late—at  McConaughy 17 Oct (ERa photo).

An adult Curve-billed Thrasher of ssp. oberholseri was photographed in Dawes, NE 7 Oct (JLe); this was Nebraska’s 9th record, and both oberholseri and palmeri have occurred in the state. Extralimital Curve-billed Thrashers were reported in sw. Kansas from Finney 13 Aug (T&SS) and Grant 11 Oct (LL). Sage Thrasher is a rare winter visitor to western OK; one was in Greer 21 Oct (JA). The season’s best count of Sprague’s Pipit was 11 in Cherry, NE 23 Sep (CNK); during migration, this species is increasingly difficult to find in the region. Evening Grosbeaks are irregular winter visitor to Kansas. 3 were in Cheyenne on the rather early date of 16 Sep (SM, DD, NM). A Lesser Goldfinch in Reno, KS 13 Aug (AM) was northeasterly. A Lapland Longspur 16 Sep in Antelope, NE (MB) was quite early. 3 Snow Buntings at Quivira 12 Nov were southerly; one still remained 29 Nov (DAk).

A female Hepatic Tanager in Cimarron, OK 3 Sep (JAG) constitutes one of very few Oklahoma records.  A female Summer Tanager in Ellsworth, KS 6 Aug (DK) was westerly, and another female was both westerly and very late in Saline, KS 1 Nov (KK). A Rose-breasted Grosbeak at Red Slough 11 Oct (DA, FH) was also late. Black-headed Grosbeaks in Payne, OK 28 Aug (SL) and Leavenworth, KS 10 Sep (GP) were easterly. On 22 Sep, a female Blue Grosbeak in Lincoln, NE was observed feeding four large juveniles (TJW); this represents a very late successful nesting  (TJW). A Lazuli Bunting 1 Oct (DL) in Loup, NE was both late and easterly. An Indigo Bunting was in Tulsa, OK 30 Oct (JS) was late, as was a female Dickcissel in Oklahoma, OK 27—29 Oct (JW).

Photos–Southern Great Plains: Fall 2016
Hover or click on each image to read the caption. 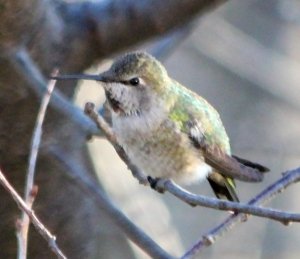 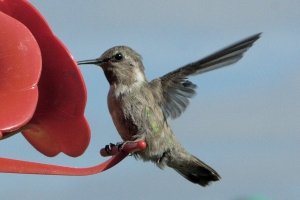 This belatedly-reported Costa’s Hummingbird, Nebraska’s second, was at a Gretna, Sarpy County, Nebraska feeder 16 Sep 2010 and remained through the second week of October. Photograph by © Ray Zeilinger. 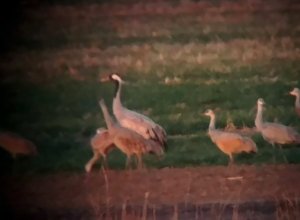 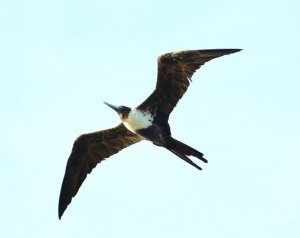 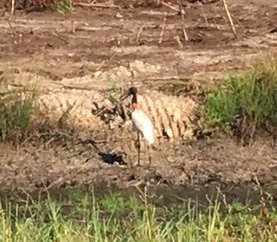 Jabiru is a mega-rarity anywhere in the ABA-area. This one was found on private property 4 August 2016 near Broken Bow, McCurtain County, Oklahoma. Photograph by © Paul Stoddard. 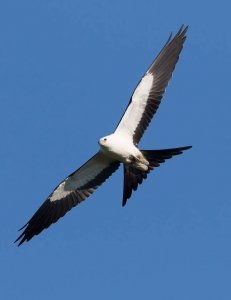 Swallow-tailed Kites are exceptional in the region, so to record 5 this season was extraordinary. This individual was photographed 5 September 2016 in Duncan, Stephens County, Oklahoma. Photograph by © Bill Adams. 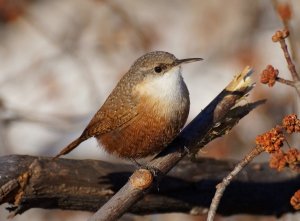 This Canyon Wren, Nebraska’s fifth, was at Shoemaker Ranch, central Cherry County, Nebraska, 28 Oct- 30 Nov 2016 (here 20 November). This species is generally resident within its range, and just occasionally wanders this far from its strongholds. Photograph by © Joel Jorgensen. 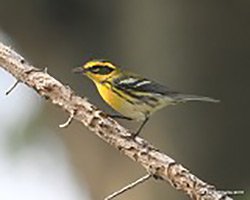 Townsend’s Warbler barely enters the region’s western limits. This individual was found significantly east of that, on 29 Aug 2016 in an Owasso yard in Rogers County; it is just one of a handful of records for the central and eastern portions of the region. Photograph by © Ken Williams.