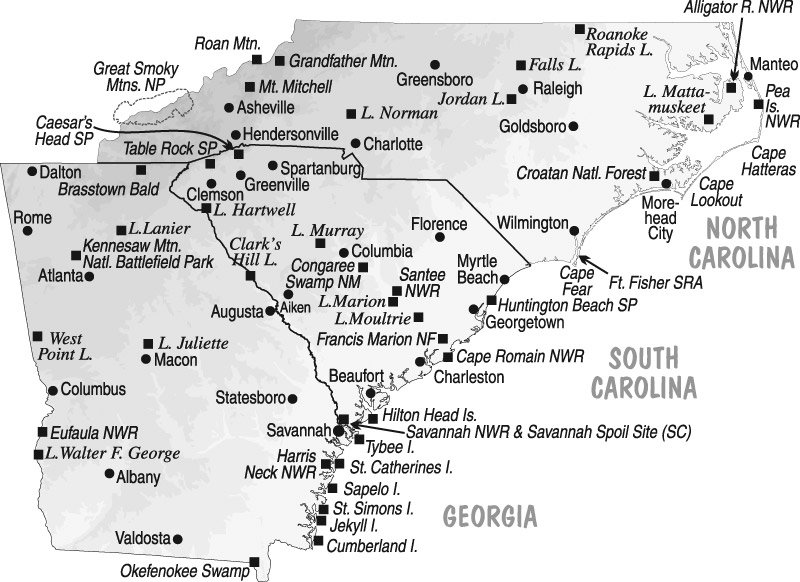 The Southern Atlantic region of North Carolina, South Carolina, and Georgia covers five major distinct geological regions: the Blue Ridge Mountains, the Piedmont, the Sandhills, the Coastal Plain, and the Coastal Zone. These regions are home to habitat specialists such as Red-cockaded Woodpecker, which is tied to Longleaf pine forests found in the Sandhills, and Red Knot, which depends on horseshoe crab eggs in the Coastal Zone as it stops over on its epic migration.

Each state enjoys a diversity of more than 430 species of birds and dozens of Important Bird Areas. Great Smokies National Park in North Carolina has one of the highest diversities of breeding Nearctic–Neotropical migrants in the U.S. The ACE (Ashepoo, Combahee, and Edisto) Basin in South Carolina has been called one of the last great wild places in the world. Wood Storks and Painted Buntings nest in the more than 250,000 acres of tidal marshes, wetlands, and hardwood forests, which are protected in a private-public partnership. Georgia’s Okefenokee National Wildlife Refuge is home to over 230 species of birds; among them are Prothonotary Warbler, Pileated Woodpecker, and Sandhill Crane.

The Southern Atlantic region is host to many research and conservation projects. Piping Plovers are survey by multiple groups while overwintering on uninhabited islands along barrier beach inlets. South Carolina hosts over one third of the Atlantic population of American Oystercatcher. Ongoing research and surveys help to ensure the survival of this vulnerable species. The area also hosts novel projects such as the Clayton County Water Authority, just south of Atlanta, which incorporates ecological conservation and recreation with maintenance of clean water supply; its large water-treatment ponds are accessible to birders, and more than 250 species have been reported there.

The ABA gratefully acknowledges the contributions of Southern Atlantic Regional Report Compilers Josh Jackson and Rich Jackson to promoting knowledge and understanding about the birdlife of the continent.