Roseate Spoonbills and Wood Storks Wander to the North

Roseate Spoonbills and Wood Storks Wander to the North

When Dianne Doherty spotted a Roseate Spoonbill near the Androscoggin River Dam in Gorham, New Hampshire on 30 Jul 2021, the sighting became the state’s first record for the species.

It was far from an isolated incident, however. Spoonbills have appeared throughout the U.S. this summer (2021), and two other states (Massachusetts and Michigan) and the District of Columbia have all recorded the species for the first time. Others appeared in Chenango Falls State Park north of Binghamton, New York; in the Long Wharf and West Haven areas along Long Island Sound in Connecticut; on Shell Beach in Guilford, Connecticut; and in Cold Spring Harbor Park on Long Island in New York, to name just a few. Spoonbill sightings in New Jersey at Edwin B. Forsythe National Wildlife Refuge and in numerous Pennsylvania parks—notably Faylor Lake, where five individuals appeared together for several days in early July—occurred simultaneously, confirming that this regional phenomenon involves multiple birds. A spoonbill at Montezuma National Wildlife Refuge in New York was seen alongside another local oddity, a Wood Stork.

Wood Storks have also been appearing across the eastern U.S. much further north than normal this summer, with additional sightings from as far north as western Michigan and northwestern Wisconsin.

Why are spoonbills and Wood Storks appearing so far north? Kevin Welsh, a biologist with the Audubon Everglades Science Center, studies the breeding success of Roseate Spoonbill in southern Florida. He said that he and his colleagues think the birds are moving north “mostly due to rising water levels here in the southern peninsula in Florida. They’re losing ideal foraging habitat for them to be able to get the young birds to reach fledgling age,” he said. Welsh tracks the number of chicks per spoonbill nest, and he says that spoonbill numbers in the Everglades are low but stable. “We’re seeing a lot of nest failures,” he said. “It’s about 37% successful, and that means at least one chick per nest. That’s pretty low. That’s not good”.

This does not mean that the spoonbills showing up in New England, New York, and Pennsylvania are expecting to nest there, however. He noted that the photos of vagrant spoonbills he has seen so far have been juveniles. While the Audubon team attaches GPS transmitters to some adult birds and tracks their movements locally, these vagrant birds are too young to have received transmitters, he said.

The excitement around so many Roseate Spoonbills showing up in the north has birders buzzing this summer, but spoonbill sightings have been getting more frequent in the northern states and provinces in recent years. In summer 2018, spoonbills visited Connecticut, Indiana, Iowa, Maine, Minnesota, and Ohio, as well as in Beauce-Sartigan, Québec. In 2020, a spoonbill showed up in a parking lot in Sussex, New Brunswick, and another worked the wetlands in and around North Fork State Wildlife Refuge in Indiana for several weeks.

Dr. Richard Veit, an ecologist at the College of Staten Island who specializes in bird vagrancy, commented in Sep 2018 that a “combination of large production of young, coupled with depletion of resources” may have pushed the birds out of their normal range. He suggested that young spoonbills with no prior experience of breeding and nesting might make the trip up north to find habitat where they do not have to compete with crowds of long-legged wading birds for food. “Maybe only 1% of birds go as far as Pennsylvania,” he said at the time, “but if there are hundreds of birds dispersing, then 1% is a substantial number.”

Vagrants that find ample food and suitable habitat may take the next step in expanding their range, or they may return south when cold weather arrives. Whatever happens to these individuals, Roseate Spoonbill and Wood Stork sightings in the U.S.’s Northeast and Midwest are a trend to watch as climate change alters the ecosystems of the southeastern U.S.

BELOW: Records of Roseate Spoonbill in the northeastern quarter of the U.S. in 2021. Orange pins represent sightings from 13 Jul–12 Aug. Map images provided by eBird and created 12 Aug 2021. 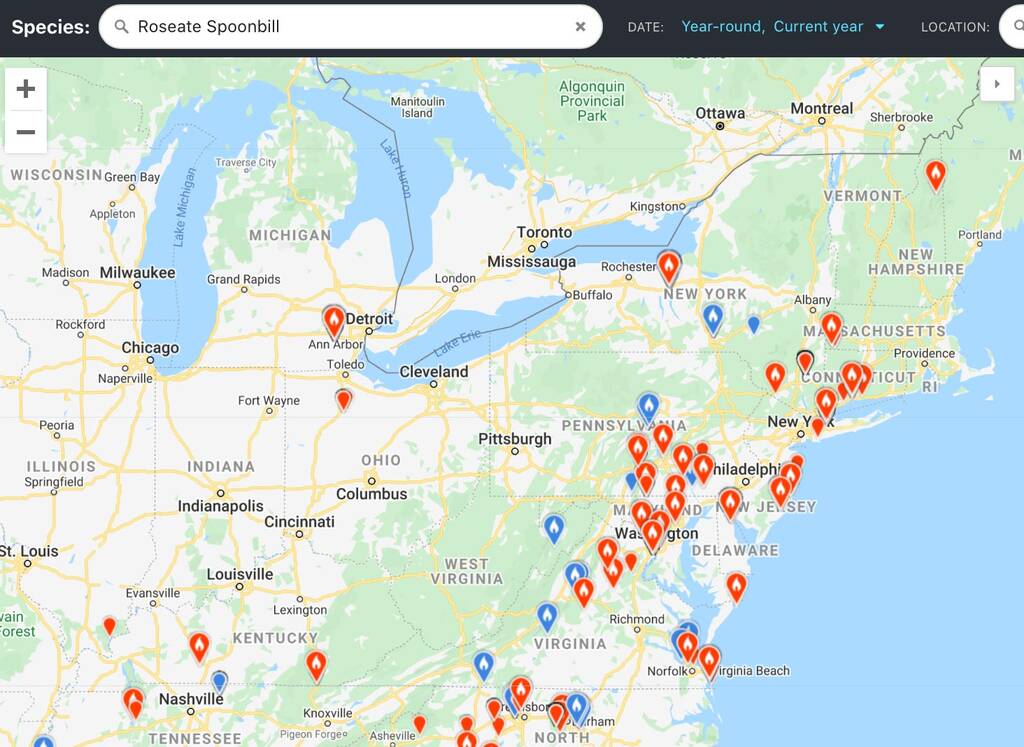 BELOW: Records of Wood Stork in the northeastern quarter of the U.S. in 2021. Orange pins represent sightings from 13 Jul–12 Aug. Map images provided by eBird and created 12 Aug 2021. 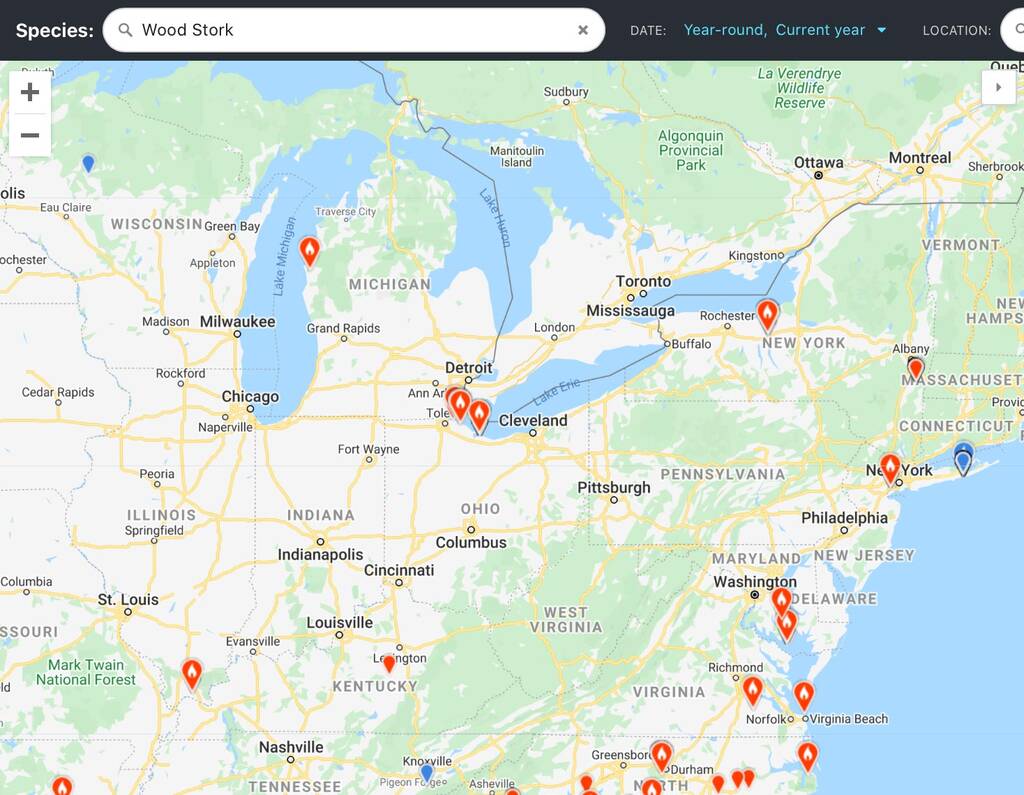 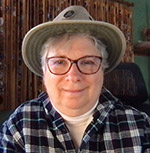 Randi Minetor is the author of two birding book series for publisher Falcon Guides: “Best Easy Bird Guides” to U.S. national parks, and the state-by-state “Birdfinding” books, which currently include Birding New England and Birding Florida. She is a full-time author with more than 150,000 books sold. Her most popular books are in the “Death in the Parks” series, which tells true stories of people who died during their adventures in national and state parks. She and her husband, photographer Nic Minetor, have visited 341 of the U.S.’s 423 national parks and have photographed nearly 450 North American bird species.

That’s amazing and crazy at the same time, can’t wait to see any of these in Michigan!

The Michigan ROSP and WOST had been very viewable over the six-eight weeks, but not so much now. When they show up, you have to GO!

Great story. Would love to see one in Tennessee.

At first this article suggests that birds may be moving north to find suitable breeding habitat because of high water levels in south Florida, but then states that these are juvenile birds not looking for breeding territory. The article also notes that breeding success in south Florida has been very low, but later states that these juvies may be heading north due to large production of young. To summarize…we just don’t know!