Rarities continuing in the ABA Area include a new quartet from Arizona, with Plain-capped Starthroat (ABA Code 4), Eared Quetzal (4), and Berylline Hummingbird (4) joined by the young Northern Jacana (4) first reported last week. The Thick-billed Vireo (4) was also seen in Florida this week once more.

Hurricane Sally made landfall this week in the eastern Gulf of Mexico as a Category 2 storm. While it was not nearly as strong as Laura earlier this season it still brought a lot of rain to a part of the ABA Area that does not need any more water. We hope our friends and members in that part of thr world are dry and safe.

Hurricane Sally likely did bring some interesting birds to shore, though. The highlight was a Red-footed Booby (4) photographed at Ocean Springs, Mississippi, where it represents a 1st for that state.

Scooting across the continent to Oregon, where a Yellow-bellied Flycatcher was photographed in Fields, which represents a state 1st for this cryptic species. That wasn’t all for Oregon, as a Yellow-throated Warbler visiting a feeder in Lane makes it a good week for yellow birds in the west.

Notable for Washington is a Blue-gray Gnatcatcher found in King.

Utah had a Red Phalarope at Antelope Island State Park this week.

In Colorado, a Common Black-Hawk was seen by many birders as is more or less hanging out in Teller.

A Long-billed Curlew in White, Arkansas, represents the 9th record for that state.

Not to be outdone, Ontario boasts a pair of Neotropic Cormorant in Hamilton, as well as a Magnificent Frigatebird in Peterborough.

Ohio also had a Magnificent Frigatebird in Franklin, almost certainly birds displaced by Laura weeks ago still filtering through the continent.

Good for West Virginia was a Brown Pelican in Waverly.

South Carolina had a Fork-tailed Flycatcher (3) on Sullivan’s Island in Charleston.

In Virginia, a Black-whiskered Vireo was seen at Kiptopeke State Park in Northampton.

Delaware’s 3rd record of Black-throated Gray Warbler was seen this week in Cape Henlopen, adding to the influx of this species in the eastern part of the continent in the last month.

New Jersey’s 3rd record of Masked Booby was seen at (where else?) Cape May.

Massachusetts also had a Black-throated Gray Warbler this week, in Essex.

A Say’s Phoebe at Haute-Côte-Nord, Quebec, is a nice find for eastern Canada.

Nova Scotia boasts a pair of nice birds this week with a young Sabine’s Gull in Pictou, and a Northern Wheatear at Vogler’s Cove.

And on Newfoundland, a Common Ringed Plover was discovered at Angentia.

Omissions and errors are not intended, but if you find any please message blog AT aba.org and I will try to fix them as soon as possible. This post is meant to be an account of the most recently reported birds. Continuing birds not mentioned are likely included in previous editions listed here. Place names written in italics refer to counties/parishes.

Readers should note that none of these reports has yet been vetted by a records committee. All birders are urged to submit documentation of rare sightings to the appropriate state or provincial committees. For full analysis of these and other bird observations, subscribe to North American Birds, the richly illustrated journal of ornithological record published by the ABA.

The Common Black Hawk (no hyphen) in Colorado is and was at Manitou Lake (Teller County), not in Colorado Springs (El Paso County). Writing that it is is roughly equivalent to writing that a bird that was actually in Durham, NC, was more or less in Raleigh, NC; that is, about 25 miles from its actual location. 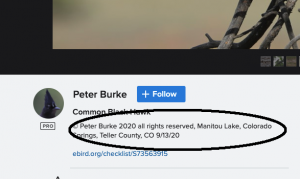