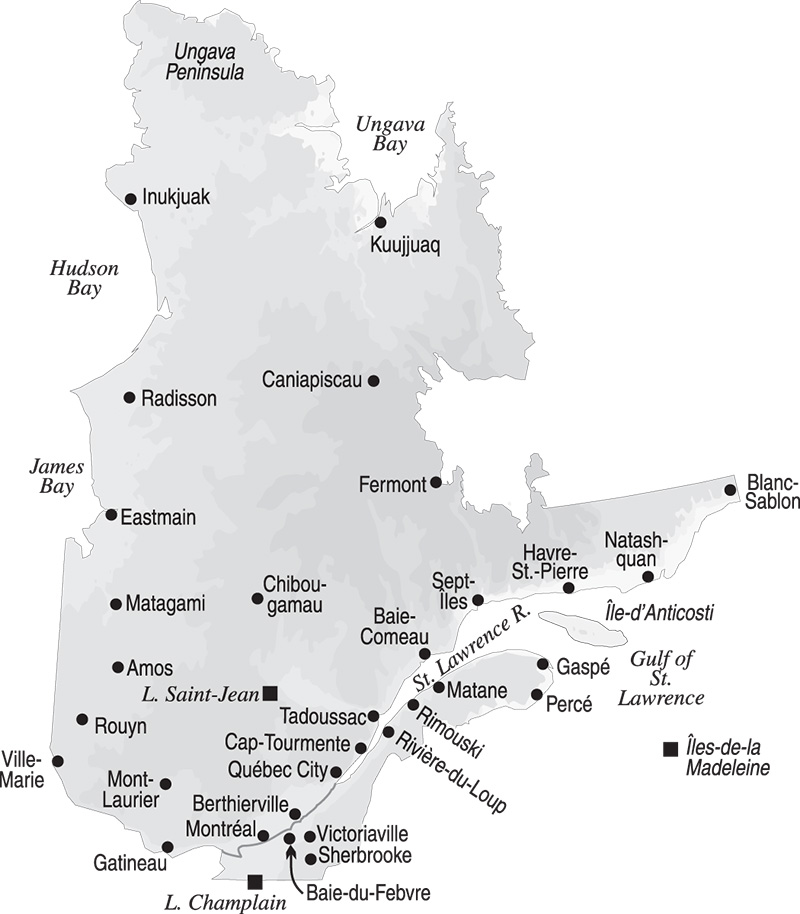 Winter 2020–2021 was very mild, especially in the East. December and January were the mildest with temperatures 2–7° Celsius above normal, while the month of February was closer to normal. Precipitation of snow was below normal in most of the province. The mild temperature and the absence of ice on the main waterways probably explain why so many unanticipated species lingered late in the season while some of them even persevered through the whole winter. Notable vagrants included Western Grebe, Fieldfare, Golden-crowned Sparrow and Bullock’s Oriole. Please take note that some of the rare occurrences addressed in this report are still awaiting official acceptance by the Québec Bird Records Committee.

Willow Ptarmigans irrupted in large numbers well south of their range to the Abitibi region. One was even reported at Mont-Laurier in the Laurentides 13 Feb (F.-A. Joanis, ph.). A Western Grebe that showed up at Newport (Gaspésie) 4 Feb (J. M. Smith, ph.) moved to nearby Chandler 5–9 Feb (P. Poulin et al.) and to Grande-Rivière 12–13 Feb (M. Thibault, Albini Couture); this contributed a fourth record for the province and a first in winter. Always rare, a Eurasian Collared-Dove visited Sainte-Marthe 7 Jan–8 Feb (M. Laquerre et al.). An American Coot at Saint-Jean-sur-Richelieu 17 Dec–28 Feb + (R. Boulet, m. ob.) confirmed a first successful wintering record in the province. A Ruddy Turnstone at Matane 21–24 Dec provided a record late departure date for the province (J. A. Banville). A Dunlin at Rivière-Madeleine 26 Dec–14 Jan was late (G. Blanchette). A Spotted Sandpiper at Rimouski 20 Dec provided a provincial record departure date for the species, exceeding the previous record by 18 days (J. Roy-Drainville et al.).

At least 100 Black-legged Kittiwakes at Matane 2 Feb (L. Fradette) were very unusual at this period. Also 200 Bonaparte’s Gulls at Baie-du-Portage (Îles-de-la-Madeleine) 26 Dec (André Couture) turned out to be a high count for this period, as well as 17 at Pointe aux Outardes 28 Dec (E. Hains). An adult Mew Gull continued at Les Escoumins until 10 Dec (D. Turgeon, ph.). Another Mew Gull of a yet undetermined race was photographed at Port-Daniel (Gaspésie) 6 Feb, a first provincial record for the month of Feb (R. Deschênes et al., ph.). A Pacific Loon was carefully identified at Rivière-Ouelle 1st Dec (J. F. Rousseau). An exhausted Northern Fulmar was spotted in a snow-covered field at Saint-Alphonse-de-Granby 27 Dec (N. Fleury, ph.). Rare in winter, several Double-crested Cormorants lingered through mid-winter, e.g. up to 3 birds in the Lachine Rapids 15 Jan (m.ob.) and 8 at Île Rouge (Les Îles-de-la-Madeleine) 4 Feb (André Couture).

Winter records of Black Vulture seem to have increased recently: up to 2 birds were at times spotted together in the Cap d’Espoir area (Gaspésie) 8–18 Dec (G. Roy, P. Poulin, m. ob. ph.), and one reappeared at nearby Chandler 26 Feb–10 Mar (J. Blais, M. Thibault, ph.). At the other end of the province, one continued at Wakefield 1 Dec–15 Jan (C. Detellier et al., ph.), and one was accepting food given by locals at Obedjiwan (Mauricie) 31 Dec–15 Jan (R. Chachai, fide C. Abran, ph.). Probably encouraged by the mild weather, about 10 Turkey Vultures lingered through mid-winter. Unusual in this part of the province in winter, an immature Golden Eagle noted at Saint-Rosaire 2–23 Jan was possibly feeding on the numerous Wild Turkeys present in the area (M. Saint-Louis et al.), while an adult was spotted at L’Ange Gardien 30 Jan (S. Robert) and an immature at Saint-Armand 1 Feb (B. Hamel). Finally, one at Matagami 18 Feb was well north of its known winter range (A. Paiement et al.). Very unusual at anytime of the year, a Barn Owl  caused a surprise at Saint-Jean-sur-Richelieu 25 Dec–18 Jan, establishing a record late departure date (G. Rémillard, ph., fide O. Barden). According to its well-known cyclic irruption at four-year intervals, the Great Gray Owl  was expected to move south in larger numbers this winter, but only about a dozen birds were reported during the season. Short-eared Owls were fairly common this winter; a high count of 9 was reported at Île du Moine 18 Dec (J. Lemoyne).

An immature Red-headed Woodpecker visited Saint-Raphaël-de-Bellechasse 8–24 Dec (A. Barbeau) while an adult brightened Chelsea 12 Jan (EM. Hébert). According to eBird, Red-bellied Woodpeckers were recorded in 36 locations in Jan–Feb compare to 9 only for the same period last year, which corroborates the amazing success of the species in the province and also an outstanding dispersal last fall. One was even reported at Val d’Or 12 Dec–28 Feb+, a first overwintering record for the Abitibi region (S. Perreault). Five Yellow-bellied Sapsuckers this winter were unprecedented: a female in Lafontaine park (Montréal) 8 Jan (O. Claing), a male at Laval 9 Jan (G. Lachaine), a female in the Morgan Arboretum (Sainte-Anne-de-Bellevue) 10 Jan–22 Mar (DJ. Léandri-Breton), a male at Île Goyer (Carignan) 19 Jan–15 Feb (A. Messier), and finally a bird of indeterminate sex at Beauharnois 20 Jan (B. Perras). A Tufted Titmouse at Sainte-Agathe-des-Monts 16 Nov–2 Feb (P. Dupuis) was apparently a first winter record in the Laurentides. A Marsh Wren at Sainte-Catherine 10 Nov–25 Jan (P. Bannon, S. Labbé et al.) and another at Île Bizard (Montréal) 5 Feb (R. Millot) both provided record late dates for the province. Noteworthy was a late Blue-gray Gnatcatcher at Île Perrot until 11 Dec (M. Juteau). A Ruby-crowned Kinglet spectacularly succeeded in overwintering at Rivière-au-Renard (Gaspésie) 3 Jan–4 Mar (K. Saint-Onge). A steadily recorded western visitor in the province, five Townsend’s Solitaires were reported during the period. Hermit Thrush occurrences in winter have become much more regular in the last decade with 7 birds still being seen in Feb. A Fieldfare found at Lévis 13 Jan (D. Garant), and traced again 21 Jan–1st Feb (S. Bégin, L. Plante, M. O’Neill et al.) provided the 9th record for the province, but the first in the last decade. A Varied Thrush discovered at Île Bizard (Montréal) 31 Jan (F. Bussière) was then sighted on and off until the end of the winter. Gray Catbirds are definitely more present in winter in recent years with 5 records in Jan–Feb, while there were 4 Brown Thrasher records in Jan–Feb.

It was a banner year for Hoary Redpoll with birds reported every day throughout the southern part of the province among flocks of Common Redpolls. Red Crossbills were also fairly common in ornamental spruce trees in southern Québec. Single Lark Sparrows made it through the coldest months with one at Saint-Charles-de-Bellechasse 7 Dec–11 Mar, (G. Jean et al.) and another at Victoriaville 23 Dec–20 Jan (N. Lemay and F. Lemay). The Golden-crowned Sparrow reported in the fall at Rimouski (V. Giroux) reappeared 1 Dec and made it through the end of the winter (G. Bouchard, J. Larivée et al.). Single Spotted Towhees delighted Lac Mégantic 2–5 Dec (C. Poulin, M. Turcotte et al.), and Grande-Rivière (Gaspésie) from 25 Nov through at least 3 Mar (A. Leblanc, m.ob., ph.). A Yellow-breasted Chat was spotted at Neuville 6–14 Dec and established a record late date for the province (N. Dupuis Azizah et al.). A male Yellow-headed Blackbird was found at Saint-Étienne-de-Beauharnois 6–31 Jan (L. Goneau et al.), the most steady location for this species in the past 40 years. An adult male Bullock’s Oriole at Saint-Bruno-de-Montarville was seen twice at a feeder 29 Nov & 1 Jan (R. Bourassa), but daily at another nearby feeder 2 Dec–11 Feb (S. Martel, G. Giroux). This represented the 6th record for the province and the latest known date. Two Baltimore Orioles were present at Sept-Îles 22 Nov through 3 Jan but only one made it through 14 Jan (B. Duchesne, C. Couture) while another male made a brief appearance at Gatineau 20 Jan (G. Emery).

ADDENDUM: a male Baltimore Oriole was present all winter from 27 Oct 2019 through 9 Mar 2020 at l’Anse-Saint-Jean (Saguenay), providing a first overwintering record for the province (m. ob., fide G. Savard). 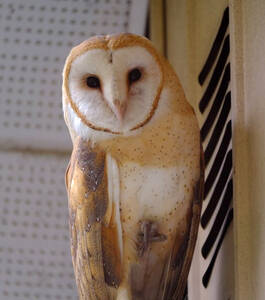 Extremely rare at any time in the province of Québec—even more in winter— this Barn Owl has been found roosting now and then (here 26 Dec 2020) on the back porch of a private property at Saint-Jean-sur-Richelieu 25 Dec 2020–18 Jan 2021. Photo © Gérald Rémillard. 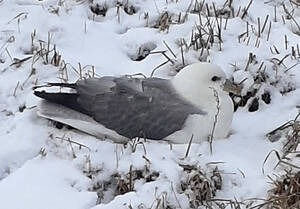 Inland records of the Northern Fulmar in the province of Québec are rare but not exceptional in late fall and early winter. This exhausted bird was photographed in a snow-covered field at Saint-Alphonse-de-Granby 27 Dec 2020. The bird eventually took off again. Photo © Normand Fleury. 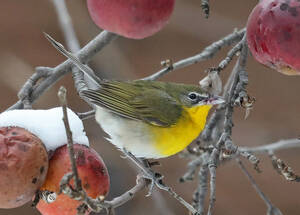 This Yellow-breasted Chat (here 11 Dec 2020) was feeding in an apple tree with other birds at Neuville 6–14 Dec 2020, a record late date for the province. There are now about 80 records for this visitor in the province of Québec. Photo © Daniel Jauvin. 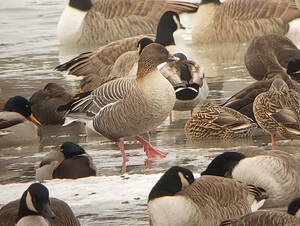 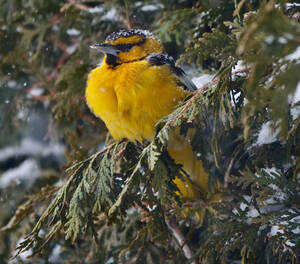 This outstanding adult male Bullock’s Oriole (here 2 Feb 2021) enjoyed a mild winter and abundant food at the feeder of their generous hosts in Saint-Bruno-de-Montarville 2 Dec 2020–11 Feb 2021. It was the 6th record for the province of Québec. Photo © Sylvie Martel/Gaétan Giroux. 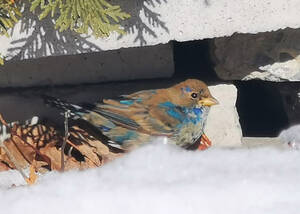 This first-year male Indigo Bunting photographed here 27 Feb 2021 at Greenville represented a second consecutive winter record for the province of Québec. This beauty was present from 25 Jan to at least 27 Feb 2021. Photo © Dottie Mojzak. 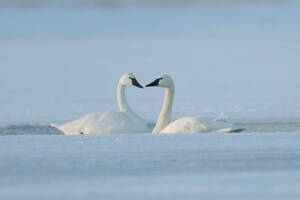 This elegant pair of Tundra Swans (photographed here 24 Feb 2021) spent the whole winter in Les Îles-de-la-Madeleine, a first in these unearthly islands of eastern Québec. Their presence here was documented from 4 Dec 2020 through at least 6 Mar 2021. Photo © Éric Deschamps. 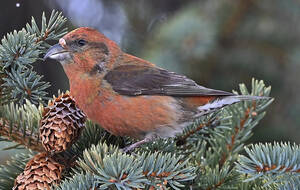 Red Crossbills were widespread in southern Québec during winter 2020-2021. This male was photographed at Sorel 1 Mar 2021. Photo © André Lanouette. 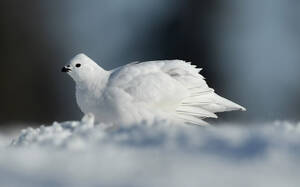 Willow Ptarmigans irrupted in large number this winter 2020-2021 in the Abitibi region, province of Québec. This bird was photographed at Lebel-sur-Quévillon 29 Dec 2020. Photo © Raymond Ladurantaye. 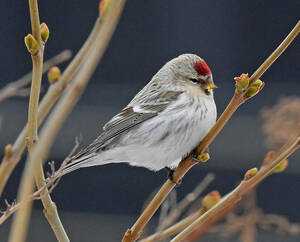 Hoary Redpolls showed up every day in southern Québec during winter 2020–2021. This splendid bird was photographed at Saint-Constant 15 Feb 2021. Photo © Sylvain Cardinal. 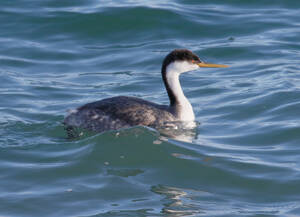 This Western Grebe was photographed at Grande-Rivière, Gaspésie 13 Feb 2021, providing a first winter record in the province of Québec, probably the consequences of a very mild winter. Photo © Albini Couture. 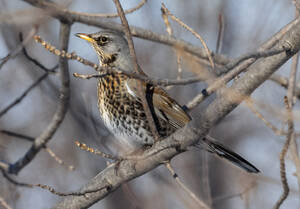 This Fieldfare, a very rare visitor from Eurasia, was feeding with American Robins at Lévis 13 Jan–1st Feb 2021 (here 31 Jan 2021), providing the 9th record for the province of Québec, but the first in the last decade. Photo © Frédérick Lelièvre.