Winter 2018-2019 was severe, with frequent freeze and thaw cycles in the south and heavy snows in central and eastern regions. Overall, temperatures remained below average in the south but near normal in the northernmost regions. It was a very interesting year for winter finches but very few vagrants were reported. Very unusual was the large numbers of Emberizine Sparrows seen at feeders, but the possible explanation was the icy cover that persisted through the winter, keeping these birds near feeders.

Despite the wintry conditions, Wood Ducks were seen in seven localities in Jan including four birds at Laval 7 Jan (G.& P. Vaillancourt) and in four localities in Feb. A male Redhead at Saint-Jean-sur-Richelieu 22 Feb+ was likely an early migrant (P. Bannon. S. Labbé). Common Eiders migrating inland stopped in the Eastern Townships, where six were found at Sherbrooke 1–2 Dec (G. Gilbert) and 90 at Magog 2 Dec (A. Perras). A Red-necked Grebe at Lacolle 6 Jan was late (A. Bessette et al).

Single Turkey Vultures at Philipsburg 2 Jan (JG. Papineau), Forillon 3 Jan (M. Chagnon), and Québec City 13 Jan (P. Tanguay) were assumed to be late migrants, while two at Hemmingford 17 Feb (B. Bellocq, H. Longpré) and one at Saint-Armand 23–24 Feb (N. Bourdon) were either early migrants or wintering birds. A few Red-shouldered Hawks, including singles at Saint-Jude 22 Feb (F. Bourret) and at Longueuil 27 Feb (D. Tétreault), were most likely wintering birds. Rare near Montréal in recent years, an imm grey Gyrfalcon spent several weeks in the area of Sainte-Catherine, Saint-Jean-sur-Richelieu, Chambly and Saint-Hilaire (m.ob.).

A Yellow-bellied Sapsucker at Saint-Armand 13 Jan was notable (A. Labelle). An Eastern Phoebe showed its cold endurance at Saint-Bruno-de-Montarville 1 Dec (S. Labbé, P. Bannon). A Tree Swallow at Melocheville 1 Dec (S. Robert, D. Ouellette) was only the second ever in the region for this month. Now more expected in winter, a pair of Eastern Bluebirds was still at Hudson 17 Jan (W. Grubert). Three Townsend’s Solitaires were reported again this season, with singles at Yamachiche 4–8 Dec (Y. Dupont, R. Chartier), Maizerets, Québec City 15 Dec (P. Lane et al), and Saint-Bruno-de-Montarville 17–24 Dec (F. Smith). At least six Hermit Thrushes survived into Jan, all around Montréal, including two at the Montréal Botanical Gardens 15–26 Jan (C. Araya, I. Chavez et al). Gray Catbirds made an appearance at Longueuil 5 Jan (MJ. D’Amour) while another one lingered at Pointe-aux-Trembles 4–16 Jan (Y. Gauthier). At least five Brown Thrashers survived into Jan including one at Rouyn-Noranda 19 Jan (C. Dion, D. Dion).

An Ovenbird was observed at Montréal in Centre-Sud district 11 Dec (J. McGill), but was found dead the day after. An Orange-crowned Warbler at Île aux Lièvres (Carignan) 14 Dec (H. Hamel) was a great CBC find.

A male Spotted Towhee overwintered at a feeder at Saint-Maurice in La Mauricie region (fide Y. Dupont, ph.). The 12 Chipping Sparrows reported throughout the province in Jan and Feb were way above average if not a record, including one as far north as Pabos (C. Kearny). Same for the Fox Sparrow, with at least seven surviving into Jan, including singles at Chandler 19 Jan (A. Gagnon, D. Jalbert) and at Rivière Magpie 26 Jan (Y. Rochepault, C. Buidin). Very rare in midwinter, Swamp Sparrow made it to 15 Jan (C. Bellemare) at Roberval, at Beauport (Québec City) up to 11 Feb (P. Lane), and at Parc Nature de la Pointe-aux-Prairies (Montréal) up to 7 Feb (m. ob.). The only Harris’s Sparrow of the season was an adult at Saint-Liguori 4–10 Jan (JF. Piché, MC. Brault). The 20 White-crowned Sparrows that lingered into Feb throughout the province were unprecedented in numbers, and included one at Rouyn-Noranda 23 Jan (ME. Gauthier). 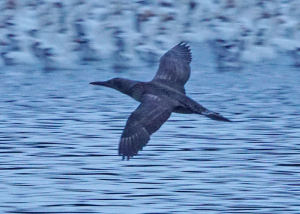 This Northern Gannet at Saint-Jean-sur-Richelieu 1 Dec was one of three reported in southern Québec in early December 2018. Photo © Réal Boulet. 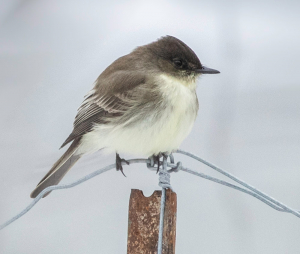 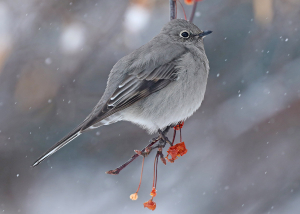 This Townsend Solitaire at Yamachiche 4–8 Dec 2018 (here 6 Dec) was one of three reported in Québec this winter. Photo © Daniel Jauvin. 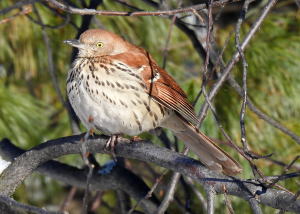 This Brown Thrasher at Rouyn-Noranda 12 Dec 2018 was one of five reported in Québec this winter. Photo © Nicole St-Amant. 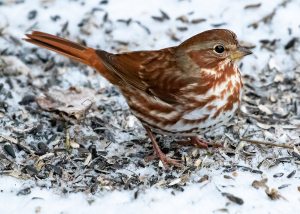 This Fox Sparrow in Montréal, Québec 6 Dec 2018 was one of seven reported in the region this winter. Photo © Sylvie Laurence. 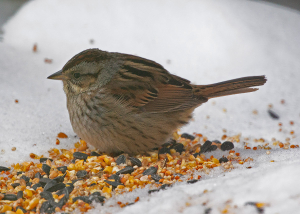 This Swamp Sparrow at Roberval, Québec on 26 Dec 2018 was one of three reported in Québec this winter. Photo © Céline Bellemare. 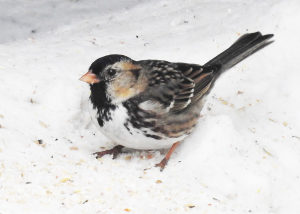 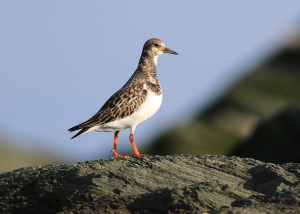