The winter 2016-2017 was among the three warmest winters in Québec’s weather history. The average temperature at Val-d’Or finished second after the record winter of 2015-16, while Montréal had its third warmest winter. Elsewhere in s. Québec, the majority of cities ranked in the top five warmest winters with temperatures 2 ° C to 5 ° C higher than the average from 1 December to 28 February. The only exception was the eastern part of the province, where the cold has been more present. In terms of precipitation, the winter 2016-2017 has respected a classic pattern. More snow fell than in a normal winter in most areas, except for extreme southern Québec near the US border where precipitation was frequently in the form of rain. The end of February was exceptionally mild in southern Québec, driving many migrants north much earlier than usual.

A live Barn Owl was a surprising discovery in a barn at Saint-Jean-des-Piles 5 Jan. The owner of the barn was able to pick up the bird and release it outside. As the news spread, a few observers soon arrived  at the site but found the bird dead in a nearby cedar edge (H. Chevalier, P. Filion, Y. Dugré). This provided a new record late date for the species.  A total of 57 Great Gray Owls was reported in s. Québec this winter. According to a four year cycle, this irruption was expected.

Rare in winter, an immature Red-headed Woodpecker was also out of range at Godbout 4 Dec onwards (D. Saint-Laurent, JPB). For a second consecutive year, a Yellow-bellied Sapsucker made it through mid-winter with one at Saint-Romuald 10-21 Jan (C. Labbé). An Eastern Phoebe at Mirabel 19 Jan was quite a surprise for an insectivorous species at this record late date (FX & T. Grandmont). A chaseable Say’s Phoebe at Baie-du-Febvre 11-16 Dec survived temperature below -10 degrees Celsius during several days before vanishing at a record late date (MP, m. ob.). A Tree Swallow, misled by the mild weather, was a record early arrival by 12 days at Pointe-aux-Trembles 26 Feb (Y. Gauthier). A Marsh Wren was singing until 3 Dec at Cap Tourmente (m.ob.). A Carolina Wren at Rouyn-Noranda 5 Jan was a good find for Abitibi (C. Dion). Blue-gray Gnatcatcher in Angrignon Park (Montréal) 4-14 Dec was a record late date (O. Renaud, m.ob.). Probably also misled by the mild weather, several Eastern Bluebirds were reported from eight localities in Feb. Again, with five individuals tallied for the season, the Townsend’s Solitaire can be considered as the most regular vagrant from western North America in the Region. Amazingly, a Veery was photographed again this year in Dec, this time in La Baie 4 December (GS). An American Pipit at Baie-du-Febvre 26 Dec (ph, MP, E. Demers, K. Barry) provided a record late date for the Region.

A continuing Lark Sparrow was last seen at Sainte-Thérèse-de-Gaspé 16 Dec (A. Couture, Y. Cyr). Vesper Sparrows were found at Grand-Saint-Esprit 1 Jan (Y. Dugré) and Saint-Blaise 9-18 Feb (L. Lemay, S. Cardinal, m. ob.). A Spotted Towhee visited a feeder and was enjoyed by hundreds at Saint-Mathieu-de-Rioux from 2 Dec though the end of winter. (LD, m.ob.). Eastern Towhees were reported as far north as Chutes-aux-Outardes from late Dec to 15 Jan (JPB) and at Baie Johan Beetz from 21 Dec-17 Jan (F. Cyr). An adult male Yellow-headed Blackbird at Contrecoeur 21 Jan (M. Surprenant) and another one at Saint-Zéphirin-de-Courval 19 Feb (ME Boudreault) were the only ones of the season. An Eastern Meadowlark at Mirabel 28 Feb (P. Marinier) was probably an early migrant. A group of 10 Rusty Blackbirds at Stanbridge Station 13 Jan was notable (PB, SL). A Northern Parula lingered at Sainte-Catherine up to 4 Dec (SD, m. ob.). Extremely rare in winter, an Indigo Bunting was also record late at Saint-Mathieu-de-Rioux 18 Dec (LD, D. Riou).

Photos–Québec: Winter 2016-2017
Hover or click on each image to read the caption. 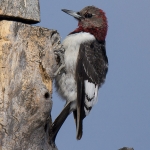 Very rare anywhere in the province in winter, an immature Red-headed Woodpecker spent the season at Godbout (here 11 Feb.). Photo by © David Turgeon. 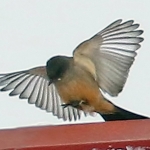 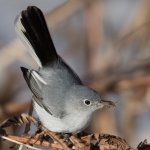 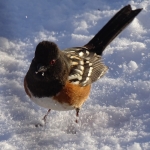