After the illusion of an early spring in late February, March came in like a lion bringing  cold temperatures and a very heavy snowstorm in southern Québec 14-15 March. Overall, spring was rainy, snowy, and cool. The important snow cover melted late and was accompanied by heavy rains, which resulted in major flooding in May, notably in western Québec. North of the 55th parallel on the other hand, the spring was warm and dry. A Black-tailed Godwit and a Mississippi Kite were the most unusual vagrants for the spring.

Single Pink-footed Geese turned up at Saint-Jean-sur-Richelieu 12-14 Mar., a record early arrival date (R. Clermont, A. Messier, m. ob.), at Saint-Louis-de-Gonzague 17-18 Mar. (ML. Beaudin, C. Bélanger), at Beauceville 14-17 Apr. (R. Gingras, C. Deschênes), and at Baie-du-Febvre 23 Apr. (L. Roy, A. Déry). A Barnacle Goose at Saint-Blaise 3-5 Mar., provided a record early arrival date (L. Paquette, R. Faucher), while two at Bedford 12 Apr. (JG. Papineau) and two at Farnham 15-19 Apr. (JP. Santerre, m.ob.) were possibly the same; anotherstopped at Baie-du-Febvre 4 May (Y. Dugré, D. Jauvin). Mute Swans included one at Saint-Césaire 13-26 Mar. (H. Brodeur, F. Lafortune), two near Saint-Fabien-de-Panet 24 May (L. Boissonneault) and a group of eight at Boucherville 25 May (H. Déry), but only two thereafter (m. ob.). Besides the Abitibi region where the species is now regular, a Trumpeter Swan was discovered at Mirabel 3 May (N. Gendron, M. Bélanger, S. Duchemin). Tundra Swans included a group of five at Saint-Blaise 6 Mar. (R. & G. Boulet), singles at Saint-Zotique 12 Mar. (J. Cantara), at Saint-Étienne-de-Beauharnois 13-17 Apr. (P. Laniel), at Pointe Lebel 6 May (JP. Barry) and two at Isle-aux-Allumettes, Pontiac 20 Apr-8 May (V. Agnesi). A pair of Eurasian Widgeon photographed in flight at Chambord 29 May was showing their typical underwing coverts (J. Rousseau). Extremely rare so far south at any time of the year, a Willow Ptarmigan showed up at Marston, Eastern Townships 22 May (S. & C. Martin). The last presence in the Region south of the St. Lawrence River was at Longueuil on 12 Dec. 1889, while one was close to the river at Quebec City on Mar. 2009.

An American Avocet was spotted at Isle Verte 28 May (R. Saint-Gelais). Usually rare in spring, a flock of 35 Whimbrels was very surprising at Ile Dupas, Lanaudière 22 May (Y. Gauthier). A Black-tailed Godwit at Yamaska 13-17 Apr. provided the 6th record for the province and only the second documented with a photograph (P. Messier, D. Jauvin, J. Lemoyne, m.ob.). Unusual in spring, single Hudsonian Godwits appeared at Chambord 13-16 May (D. Lavoie et al.), and at Macamic 14 May (J. Gagnon). Single Marbled Godwits at Chambord 14-18 May (J. Rousseau et al.), Sainte-Luce 17-24 May (C. Douville, G. Rivard), and Berthierville 26 May (Y. Gauthier) were noteworthy. Two different Ruffs in the Bécancour area 29 Apr.-4 May (D. Jauvin, P. Bergeron, m.ob.), single females at Rivière-Ouelle 12 May (C. Auchu) and at Saint-Blaise 14-15 May (G. & R. Boulet), and finally a male at Longue-Rive 19 May, relocated at Grandes-Bergeronnes 21 May (D. Turgeon) concluded a good season for the species. A Willet was identified at Baie-du-Febvre 30 May (G. Éthier, M. Rouleau). It was a very good spring migration for Wilson’s Phalarope with at least 12 records.

Single Tricolored Herons were found at Pointe-à-la-Croix 23 May (C. Vallée, ph.) and at Grosse-Île (Magdalen Is.) 27 May (B. Vigneault et al.). A single Cattle Egret was located at Boucherville 18 May (A. Duval et al.) as well as a Little Blue Heron at Pointe-au-Père 7 May (L. Jacques). Single Black Vultures were sighted at Saint-Barthélemy 15 Apr. (R. Gagnon, ph.), Lac-Castagnier (Abitibi) 9 May (S. Perron), and Isle Verte 31 May (JP. Ouellet, M. Lafleur). A Mississippi Kite was spotted migrating over the Valleyfield hawkwatch 24 May, a third record for the province (B. Barnhurst, M. McIntosh).

An overwintering Red-headed Woodpecker in Godbout was observed at least until 26 Mar. while single adults were seen at Godmanchester 22 May (E. Tremblay, M. Leclerc), Rigaud 23 May (P. Bergeron) and Prévost 26-27 May (Y. Payette). A Loggerhead Shrike equipped with a transmitting antenna at Cap Tourmente 28 May was a great find (J. Bernier et al.). This bird probably originated from the Eastern Loggerhead Shrike Recovery Program in Ontario.

Two more Townsend’s Solitaires were added to last winter list of five: one at Val d’Or 20 Apr. (M. Roy) and one at Rouyn-Noranda 8 May (J. Gagnon). A presumed hybrid Pine Siskin x American Goldfinch was photographed at Stukeley-Sud 7 May onwards (R. Thomas) providing a second documented sighting in the Region. A male Prothonotary Warbler at Québec City 18 May was noteworthy (M. Côté). A presumed hybrid Mourning Warbler x Common Yellowthroat was photographed for the second consecutive year at the same place at Laval 20 May (S. Guertin et al.). Hooded Warblers made a nice show up this spring with single males at the Montreal Botanical Gardens 25-27 Apr. (L. D’Amours, m.ob.) and at Île des Soeurs (Montréal) 10 May (A. Schmidt), and a female at Angrignon Park (Montreal) 11 May (A. Gagné). The only Yellow-throated Warbler of the season was nicely documented at Saint-Arsène 9-11 May (D. Bérubé). A male Prairie Warbler was defending territory at Coaticook 11 May through at least 26 Jun. (G. Gilbert, m. ob.).

The Spotted Towhee that made it through the winter at Saint-Mathieu-de-Rioux was last seen 25 Apr. (L. Dionne, D. Riou). A singing male Nelson’s Sparrow at Châteauguay 12 May was both early and a rarity for this locality (D. Auger).  A Dark-eyed Junco of the oreganus group was photographed at Val d’Espoir 17-19 Apr. (G. Roussy). The Summer Tanager continues to be a regular vagrant with single females at Dollard-des-Ormeaux 17-19 May (J. White), Cap Tourmente 20 May (R. Gingras), and Québec City 22 May (S. Blais). A first summer male Blue Grosbeak was at Drummondville 5-9 May (Y, Roy, m.ob.). An unprecedented number of Painted Buntings enlightened the Region with single males at Stoneham-Tewkesbury 7-21 May (D. Ferland, m.ob.), Fatima 21 May (S. Leblanc et al.) and Rivière-Madeleine 23 May (G. Blanchette). Rare in spring, Dickcissels brightened Saint-Joseph-de-la-Rive 18-20 May (Z. Duchesneau), Sainte-Aurélie 25 May (S. Larivière) and Rimouski 31 May (D. Ruest, J. Roy).

A Western Meadowlark at Baie-Comeau 21 May (JP. Barry) was a new addition to the numerous sightings of this species on the North Shore in the past 15 years. An immature Orchard Oriole at Hudson 20 May was not completely unexpected (W. Grubert) but single females at Laterrière 23 May-1st Jun. (Y. Darveau et al.) and at Les Bergeronnes 31 May (P. Côté et al.) were exceptional sightings in these northern regions; additionally, for the second consecutive year, a pair was back at Stanstead 13 May and was seen building a nest 25 May (S. Kohl et al.).

Photos–Québec: The Spring 2017
Hover or click on each image to read the caption. 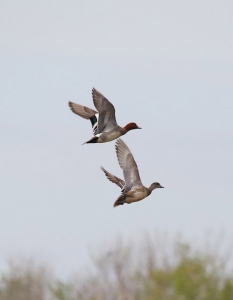 Although there is no confirmation of breeding in North America, this pair of Eurasian Wigeon in flight at Chambord, Lake Saint-Jean 29 May, could represent an early sign for such an event. Photo by © Josée Rousseau. 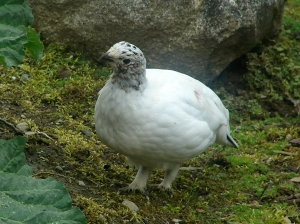 This Willow Ptarmigan at Marston, in the Eastern Townships, 22 May 2017 represented a very rare sighting south of the St-Lawrence. Photo by © S. & C. Martin. 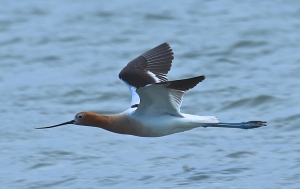 This American Avocet was highly appreciated at L’Isle-Verte 28 May. Photo by © R. St-Gelais 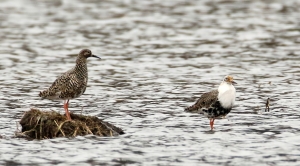 At least 5 Ruff have been reported this season in the province, including these two birds seen together seen at Bécancour 2 May. Photo by © Alain Daigle. 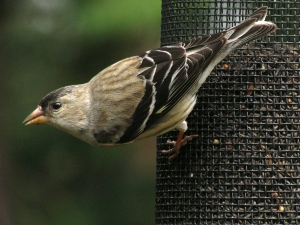 This hybrid found at Stukely-South 7 May was the second documented record in the province. 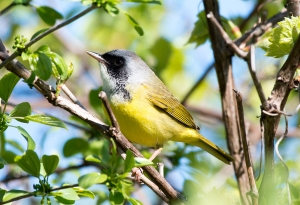 This hybrid appeared at Laval 20 May for the second consecutive year. Photo by © S. Guertin. 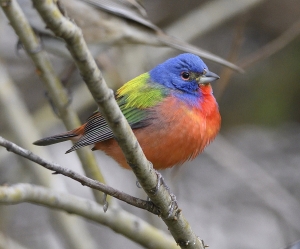 The Painted Bunting is increasingly reported in spring in the province. Two birds were reported this spring, including this male at Îles de la Madeleine 21 May. Photo by © Alain Richard.