June was very warm and dry with the only significant precipitation reported late in the month. On the other hand, July was cool with close to normal precipitation. The visit of a Steller’s Sea-Eagle in the Gaspé region in July was an unbelievable experience for many Québec birders. Other highlights in the province this summer included a (possibly two) Common Shelduck, a Black-necked Stilt, a Burrowing Owl and the first confirmed breeding record of Fish Crow. More information on these and on other interesting birds seen in summer 2021 are following. Please take note that some of the rare occurrences addressed in this report are still awaiting official acceptance by the Québec Bird Records Committee.

Single Mute Swans were reported at Métabetchouan 19 Jun–7 Jul (C. Harvey, m. obs.), Île aux Grues (Montmagny) 19 Jul (C. Lafrance), and Saint-Méthode 25–26 Jul (D. Lavoie). This swan species has never been confirmed nesting in the wild in the province. The pair of Trumpeter Swan that came back to Saint-Fulgence (Saguenay) for the 5th year finally nested and produced eight offspring (M. Lemieux, m. obs.). This site is the only one where the species has been confirmed nesting outside the Abitibi region. Single juvenile Common Shelducks of unknown origin were photographed respectively at Saint-Jean-sur-Richelieu 22 Jul (JG. Martin) and in Mont-Tremblant park 25-26 Jul (S. Gobeil, É. Normandeau). Unfortunately, these birds were not relocated again during the present period, but a more dependable individual was seen by many observers 21 Aug+ at Sorel (M. Pelletier, J. Lemoyne, m. obs.). The Québec Bird Records Committee has reviewed 16 past provincial records recently; 4 records from the eastern part of the province were attributed to birds of wild origin because of the coincidence with years of invasion in Iceland and were consequently accepted onto the Quebec bird list. Most of the remaining 12 records referred to birds of unknown origin. Adding to our knowledge on the distribution of the Bufflehead in northern Québec, a female photographed with 7 juveniles east of Natashquan 29 Jun appears to represent the easternmost breeding report in Canada (Y. Darveau, N. Boutin).

A Black-necked Stilt at Pointe-des-Cascades 5–8 Jun provided the second record for the province (M. Belliard, N. Landry, m .obs.). A Marbled Godwit was identified at Victoriaville 2–6 Jun (A. Daigle) while a Willet stopped briefly at Rivière-Ouelle 12 Jun (S. Limouzin).

Possibly two different Black Vultures appeared in four localities in Gaspésie 16 Jun–20 Jul (m. obs.), while one was at Saint-Armand 23 Jul (M. D’Auteuil, Y. Daigle). A Turkey Vulture was photographed at Radisson 23 Jul, north of its range (D. Bellemare). The event of the year—or perhaps the century―was the discovery of a Steller’s Sea-Eagle in eastern North America. After being found in the Restigouche River estuary, NB 28 Jun–2 Jul, this majestic Siberian raptor made successive appearances in the York River estuary, Gaspé QC, 7 & 9–11 Jul (F-X. Tardif, S. Poulin, m. obs.), 17 Jul (F-X. Tardif, D. Saint-Pierre) and again 30–31 Jul (D. Saint-Pierre, m. obs.). The bird seems to have made at least one round trip between NB and QC, since it was present again on the Restigouche River 23 & 24 Jul—a distance of 187 km from Gaspé. Later in the summer, the bird moved into the St. Lawrence estuary and was spotted at Matane 7 Aug (J.A. Banville) and 8 Aug (D. Demers). Flight photographs of the bird have revealed great similarities in some fine details of the left wing with the bird photographed along the Denali highway, in interior Alaska 30 Aug 2020, strongly suggesting that it would be the same individual. In summer, this eagle should normally be found in far eastern Russia where it is nesting along the coast and surrounding islands of the Sea of Okhotsk and Bering sea.

For the second consecutive year, a pair of Northern Hawk Owl nested at Île aux Lièvres (Rivière-du-Loup), raising four young in Jun (M. Boisvert, M. Rousseau), an unusual event so far south. For the third consecutive year, a vagrant Burrowing Owl visited the province; this time it was first reported on a private property at Grand-Métis around the end of Jun (G. Dion) but the birdwatching community was not informed of its presence before 22 Jul (S. St-Pierre, m. obs.)

Red-headed Woodpeckers were reported at five different locations, but again this year, no breeding was confirmed and has not been in over a decade. The Red-bellied Woodpecker breeding range has now extended to the Lake Saint-Pierre area where a juvenile was photographed at Nicolet 18 Jun (F. Arbour et al.). An immature Scissor-tailed Flycatcher was briefly seen at Maizerets (Québec City) 11 Jun (P. Dubé, B. Nadeau, F. Carbonneau, ph.). The pair of Fish Crows present at Magog since last spring nested with success raising 2 offspring, a first for the province (B. Turgeon, S. Beaudette, m. obs). A pair of House Wrens successfully nested at Pointe-à-la-Croix, 8 Jul (A. Olive), a first for the Gaspé peninsula. Two Sedge Wrens were found at Highwater (Eastern Townships) 1–22 Jul (A. Valade, F. Saint-Arnaud), a new location for the species. A Wood Thrush at Gaspé, 10–11 Jul (S. Robert, D. Ouellette) was one of the many rare sightings for the Gaspé peninsula this season. Two Bohemian Waxwings near Murdochville 11 Jul were intriguing considering the species has never been found breeding on the south shore of the St. Lawrence River. An American Goldfinch at Kuujjuarapik 22 Jul (A. Daoust), was one of the northernmost records for the province. Although breeding Grasshopper Sparrows are still present regularly in Pontiac county, this species is now very rare elsewhere in southern Québec; this summer, a single male defending a territory at Godmanchester 1 Jun–21 Jul (M. Romar, B. Souter, m. obs.) was noteworthy. A complete breeding plumaged male Lark Bunting came to a feeder at Val-Bélair (Québec) 11–12 Jul, providing the 20th record for the province (J. Gagné, D. Lemieux). A Nelson’s Sparrow at Gatineau 13–14 Jun was most likely a late migrant from the James Bay population (L. Noël, M. Saint-Gelais). Yellow-headed Blackbirds visited 6 different localities in Jun only. A silent Western Meadowlark was carefully studied at Rivière-Éternité (Saguenay) 13 Jun (A. Lavoie, M. Bélanger, ph). A female Orchard Oriole continued at Pointe-aux-Loups (Les Îles-de-la-Madeleine) up to 9 Jun. (André Couture, B. Arseneau), while a male made it to Tadoussac 4 Jun (L. Desbordes). The species was confirmed breeding at Pike River for a second year in a row with a male feeding a young bird 22–23 Jul (J. Simard, T. Jobin).

A juvenile Blue-Winged Warbler was photographed and banded at Godmanchester 22 Jul (S. Duval), providing the first confirmed breeding for the species in the province. However, it remains unclear whether the two parents were both Blue-winged Warblers or hybrids (Brewster’s or Lawrence’s). The male Prothonotary Warbler found at Sainte-Foy in May was last seen 3 Jun (m. obs.). A female Hooded Warbler caused a big surprise in Mount-Royal Park 11 Jun when it was seen building a nest (R. Millot, m. obs.); even more confusing, it laid and incubated four eggs that had not hatched by 9 Jul after which time the bird left the area. No male has ever been seen around suggesting that the eggs had not been fertilized. Nevertheless, this represented a first nesting attempt by this species in the province. In the wake of its huge movement toward eastern Québec last fall, the Northern Cardinal expanded its breeding range to Matane where a pair raised two young 14–31 Jul (M. Ouellet). A pair was also reported at Rimouski 13 Jun–26 Jul (C. Douville et al.) and singles at Chicoutimi 8 Jul (J. Saint-Hilaire), Trois-Pistoles 17 Jul (JC. Pelletier), Grosse Île (Les Îles-de-la-Madeleine) 22 Jul (L. Imbeau), l’Étang du Nord (Les Îles-de-la-Madeleine) 23 Jul (L. Lemay, N. Guénette), and Rivière-du-Loup 26 Jul (R. Gagnon). A pair of Indigo Buntings feeding a juvenile confirmed nesting at Rivière-Éternité 25 Jul, apparently a first for the Saguenay region (A. Lavoie, M. Bélanger, J. Normand). 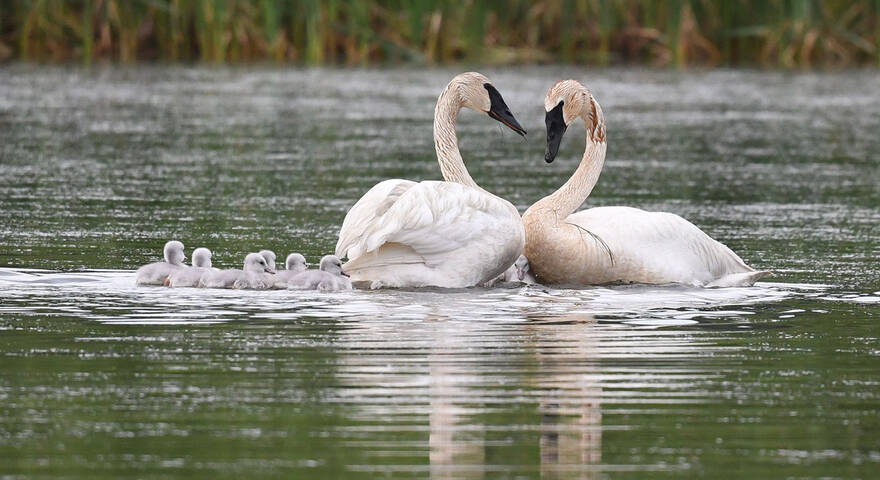 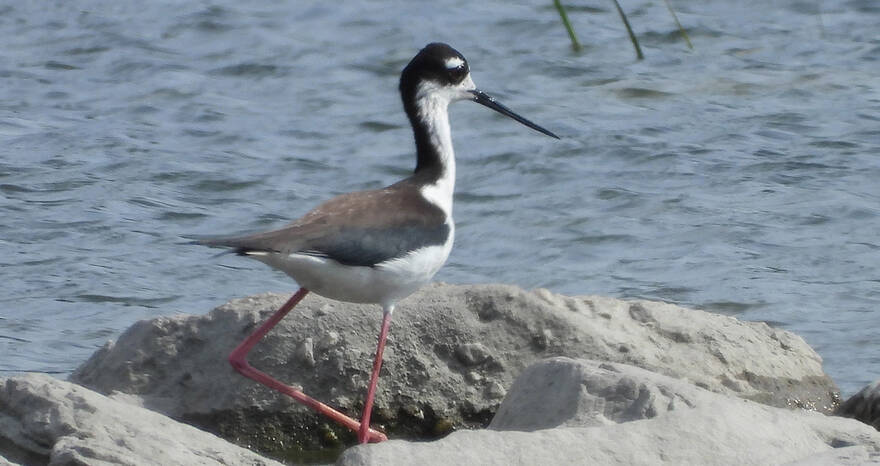 This Black-necked Stilt was just the second for the province of Québec. Photographed here at Pointe des Cascades 5 Jun 2021, it was present 5—8 Jun 2021. Photo © Jean Coté. 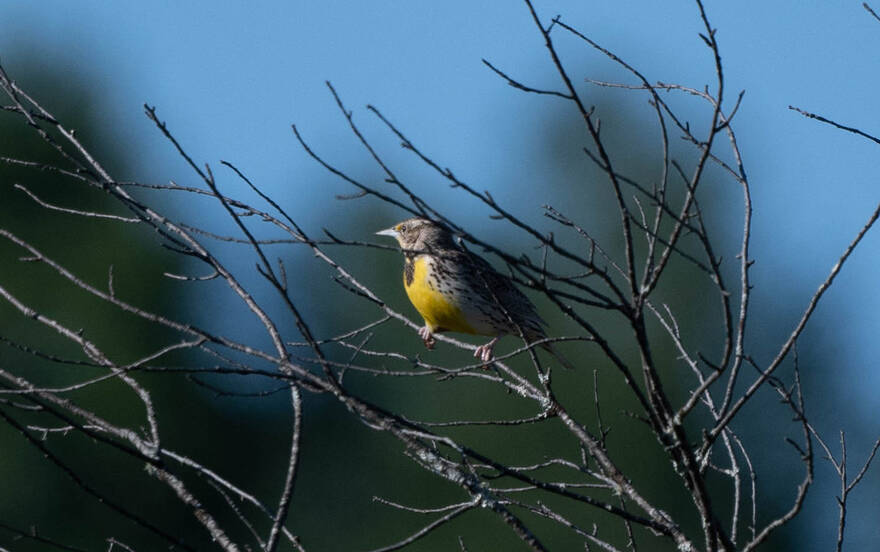 This Western Meadowlark made a one-day stop at Rivière-Éternité (Saguenay), in the province of Québec, 13 Jun 2021. Photo © Annie Lavoie. 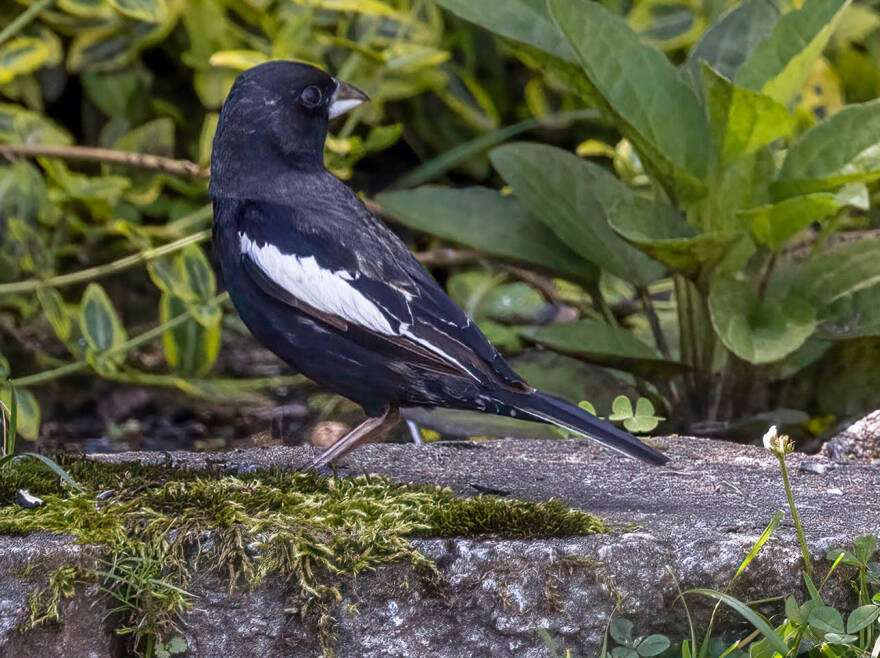 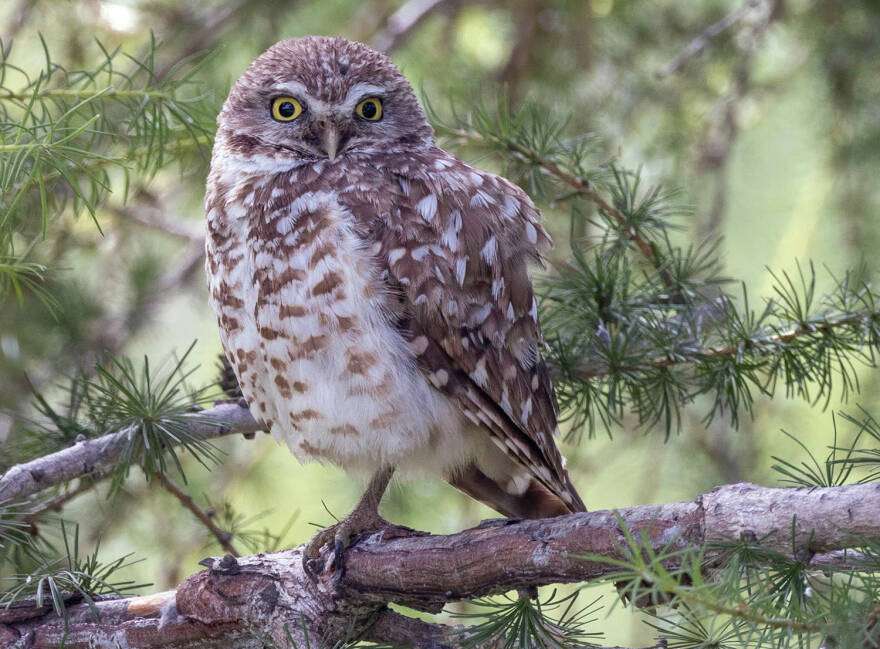 This Burrowing Owl (photographed here on 23 Jul 2021) spent most of summer 2021 at Grand Métis (Lower St.Lawrence) in the province of Québec. Photo © Suzanne Labbé. 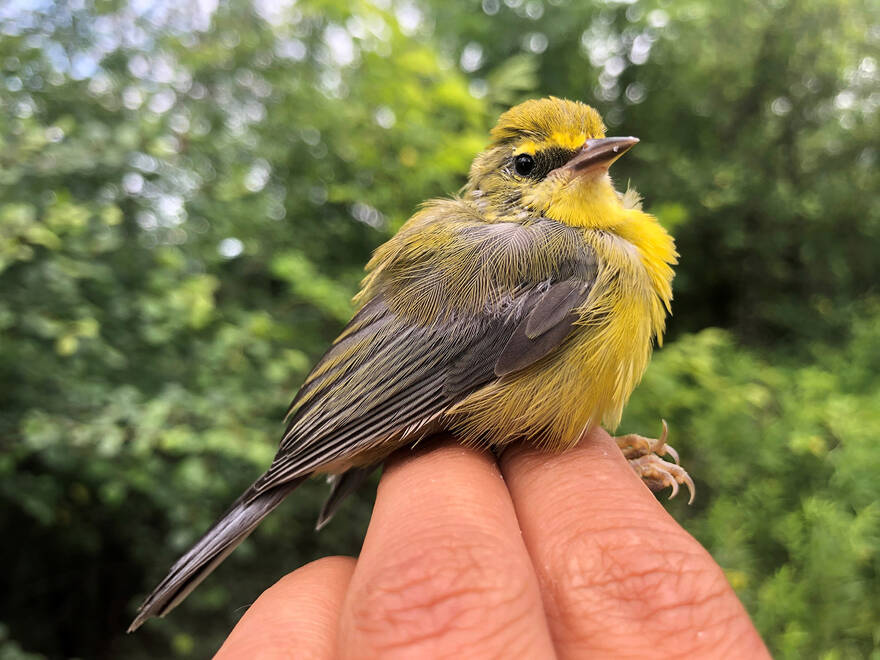 This Blue-winged Warbler photographed at Godmanchester 22 Jul 2021 was the first juvenile documented in the province of Québec, definitely confirming breeding of the species. Photo © Pierre Masse. 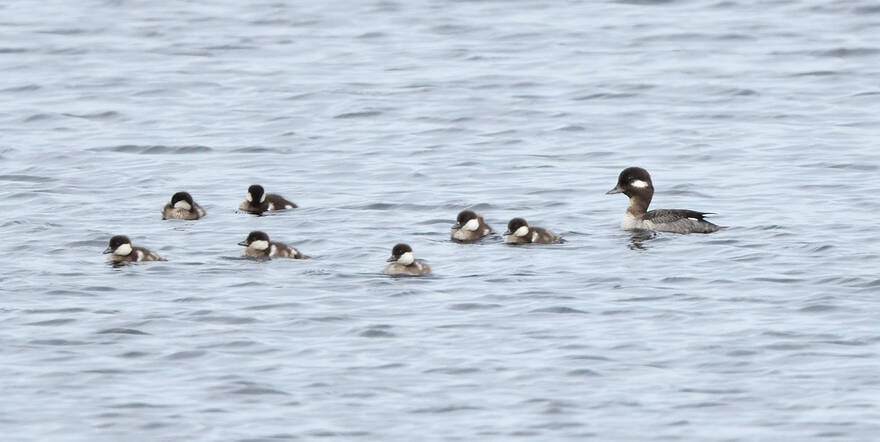 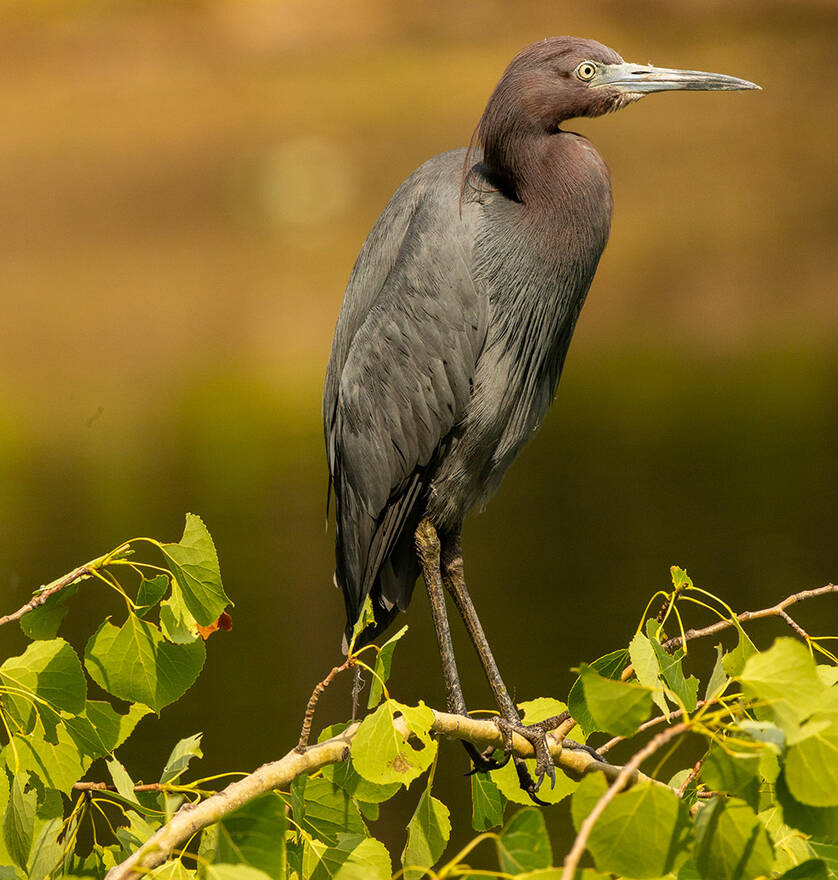 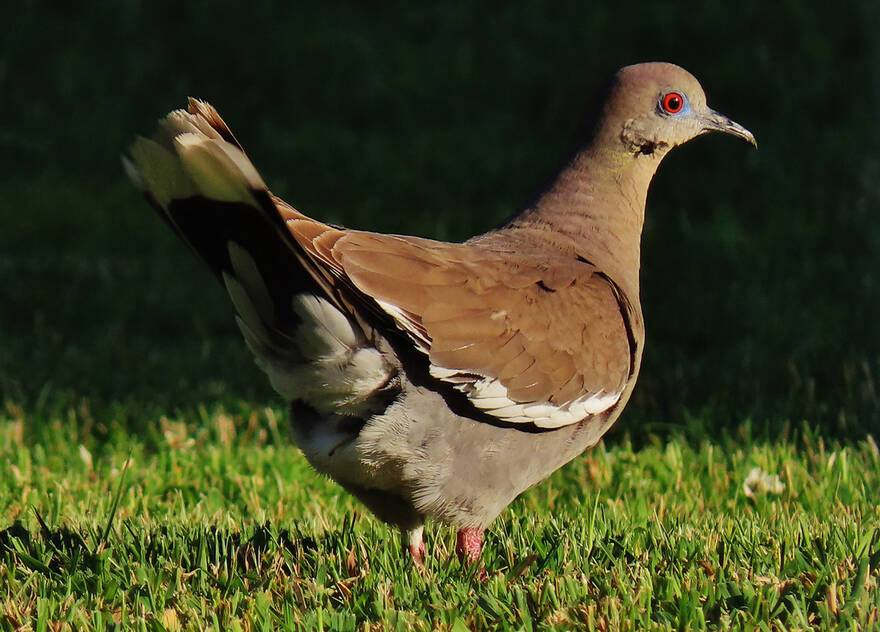 This White-winged Dove photographed at Rivière-Madeleine (Gaspésie) 17 Jul 2021 was one of five reported in the province of Québec in summer 2021. Photo © Georgette Blanchette. 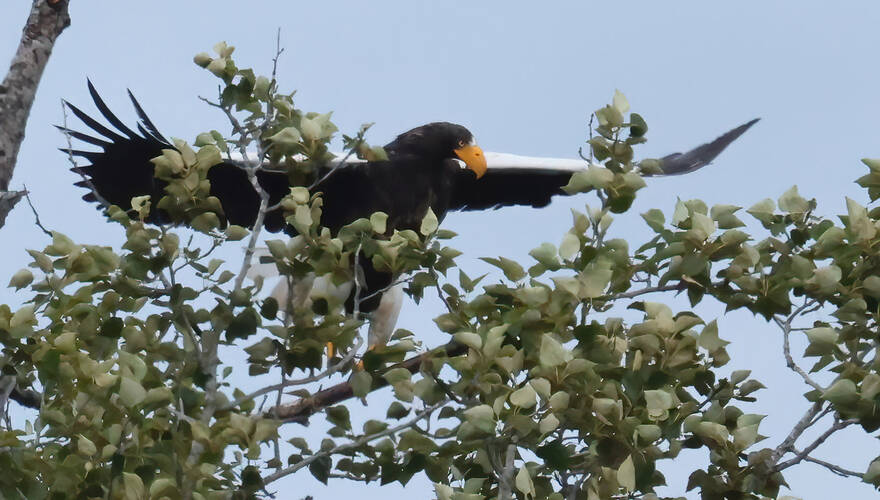 This adult Steller’s Sea-Eagle was the favorite target of photographers in summer 2021 on the Gaspé Peninsula. Despite its huge size, it was not always easy to find as it travelled between the Restigouche River estuary in New Brunswick and the York River estuary in QC 28 Jun—31 Jul 2021. Photographed here at Gaspé on 10 Jul 2021. Photo © Daniel Jauvin. 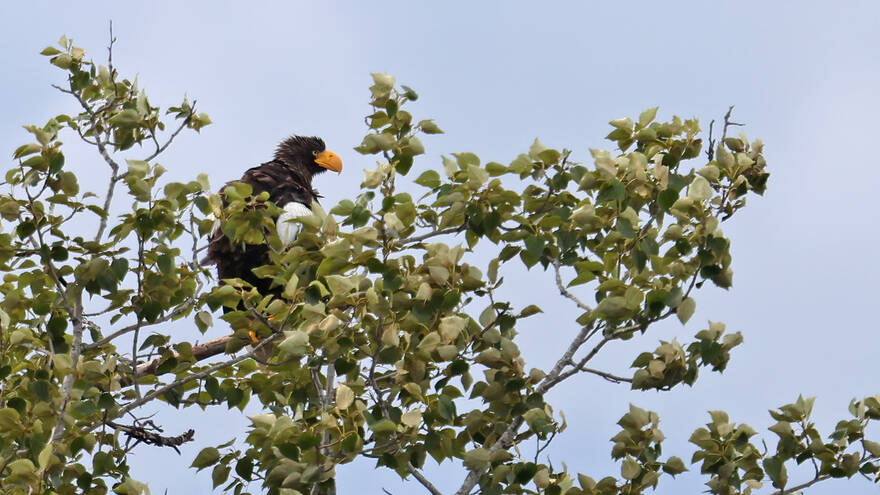