For the third consecutive year, the summer was hot and dry. June was one of the driest in years, while July was the warmest month in 100 years. The highlights for the period included a Mississippi Kite and a Burrowing Owl. The Yellow-billed Cuckoo, normally a rare breeder in the region, staged an impressive demographic explosion.

For the 6th consecutive summer, Black-bellied Whistling-Ducks made an incursion into the region; this time a group of 5 made a brief appearance at Montmagny 21 Jun (G. Bonneau, ph.). A Mute Swan paused at Ile aux Grues 23–25 Jul (M. Robert). A pair of Trumpeter Swan photographed with 4 young documented breeding at La Morandière (Abitibi) 9–16 Jul (R. Gélinas). Pairs summered at Saint-Fulgence (m.ob.) and at Saint-Étienne-de-Beauharnois (L. Falcon, D. Collins) but with no evidence of breeding. Several birds were also reported in the Outaouais valley, west of Gatineau (m.ob.). A Tundra Swan visited Irlande 3 Jun (A. Sheinck). A Tufted Duck continued at Sept-Iles until 1 Jun (B. Duchesne). A Eurasian Collared-Dove turned up at Béarn (Témiscamingue) 23 Jun (M. Gervais, ph.). White-winged Doves were remarkably prominent in the region this summer; single birds were at Trois-Rivières 29 Jun (H. Samson), Les Escoumins 1 Jul (D. Turgeon), and Ile Bonaventure 31 Jul (R. Turgeon). It was an exceptional summer also for Yellow-billed Cuckoo; at least 40 individuals were reported in 33 localities in Jun–Jul (fide S. Denault). A pair of Sandhill Crane was confirmed nesting in Frontenac National Park 13 Jun, a first for the Estrie region (T. Deleuil). A Baird’s Sandpiper, rare in spring, was at Yamachiche 1 Jun (M. Pelletier). A Willet visited Rivière-Ouelle 7 Jun (C. Girard, C. Auchu). Rare for the dates, Long-tailed Jaegers appeared at Portneuf 13 Jun (T. Grandmont) and at Pointe-des-Monts 7 Jul (B. Drolet, J. Ibarzabal). An adult Sabine’s Gull near Val d’Or 4 Jun was surprising for the Abitibi region (S. Perreault). Small gulls, now seen routinely, were noticed mainly along the St. Lawrence River: at least 6 Black-headed Gulls localized along the estuary and the gulf; 5 Little Gulls around the estuary; 5 Laughing Gulls also along the estuary; and 7 Franklin’s Gulls more scattered along the St. Lawrence corridor. A total of 119 Lesser Black-backed Gulls at Rivière-Saint-Jean (Minganie) 4 Jul established a new record high count for the region (B. Drolet, J. Ibarzabal).

Sedge Wrens were reported at several new locations in the Montréal area with up to 2 at Ile Saint-Bernard (Châteauguay) 14 Jun that continued into Aug (D. Ouellette, S. Vanier); up to 2 at Cap Saint-Jacques Nature Park (Montréal) 30 May–14 Jun (J. Demers, m. ob.); and up to 4 in Lauzon Marsh (Pierrefonds) 14 Jun–15 Jul, where nesting was confirmed (S. Denault et al.). One at Lorrainville (Témiscamingue) 11-13 Jul was well north of its range (J. Fréchette). Carolina Wren is becoming more prominent in southern Québec, with at least 2 dozen sites occupied this summer. A Common Redpoll spent part of the summer at Rimouski 29 Jun–23 Jul (P. Saint-Pierre, G. Raboin). It was a good summer for Red Crossbills as evidenced by a group of 11 in the Mount-Royal Cemeteries 24 Jun– 3 Jul (R. Milot, P. Babeux). A singing male Grasshopper Sparrow at Saint-Armand 5–24 Jul was a first for Brome-Missisquoi regional county (T. Jobin et al). A Lark Sparrow at Plaisance 1 Jun provided a rare summer record for the region. LeConte’s Sparrows showed up at Longue-Rive 9–21 Jul (D. Turgeon, C. Émond) and Pointe-aux-Outardes 25 Jul (S. Robert). Single Yellow-headed Blackbirds visited Cabano 2 Jun (M. Beaulieu), Rouyn-Noranda 8 Jun (R. Deschênes) and La Malbaie 20 Jun (D. Tremblay). A Blue-winged Warbler was banded at Godmanchester 13 Jun and again 17 Jun (S. Duval, McGill Bird Observatory). The species is not yet well established in the region, and is still irregular in summer. A “Lawrence’s” Warbler was photographed at Godmancheser 14 Jun (A. Quenneville). An adult male Blue Grosbeak brightened Grosse-Île (Îles de la Madeleine) 6 Jun (C. Roy). A female Painted Bunting at Île du Grand Calumet 8 Jun (R. Dubois) was the first of its species to be recorded away from a feeder in the region. A male also visited a feeder at Hatley 9 Jun (D. Geffroy).

Photos–Québec: Summer 2020
Hover or click on each image to read the caption. 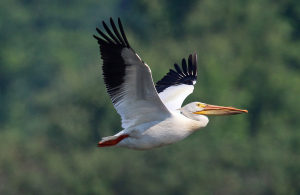 By all appearances, the American White Pelican is slowly pushing its way into Québec, especially the northwest. This individual was present in the south at Maskinongé 18–26 Jun 2020 (here 21 Jun 2020). Photo by © Daniel Jauvin. 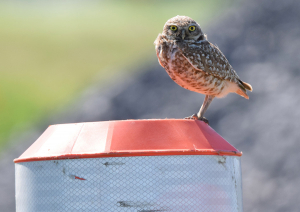 On 13 Jun 2020, amazing circumstances led a few birders to examine this image of a Burrowing Owl found on a digital camera owned by a person unfamiliar with owls. This bird had been photographed on 7 Jun 2020 at Saint-Hubert near Montréal, providing the region with its 5th record. Unfortunately, subsequent searches for the bird did not relocate it. Photo by © Guy Lamarre. 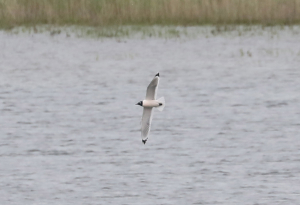 The Franklin’s Gull is a rare but regular vagrant during summer in the region. This adult was photographed at Saint-Lazare on 10 Jun 2020. Photo by © Michel Juteau 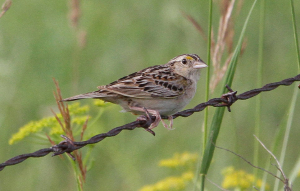 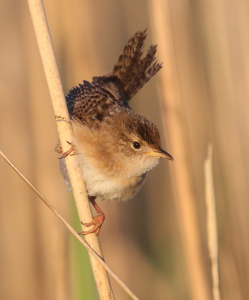 This summer, Sedge Wren has been found nesting on the island of Montréal. This individual was photographed at Pierrefonds in the west end of Montréal 14 Jun 2020. Photo by © Samuel Denault. 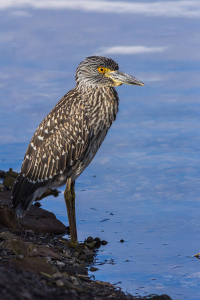