The summer of 2017 was very dry, with temperatures slightly above normal in eastern Québec. By contrast, western Québec, especially the Outaouais Valley, was cool and wet. To illustrate this difference, Rimouski received only 65 mm of rain during June–July, while Gatineau had 379 mm. It was an interesting summer for rarities, especially early in June, when the Region was graced by its first-ever Painted Redstart. A Western Grebe and a Crested Caracara followed soon after. Then in July, a small flock of Black-bellied Whistling-Ducks, a Tropical Kingbird, and a Swallow-tailed Kite were also prize finds.

A late northbound Marbled Godwit was spotted at Sept-Îles 10–11 June (M. Laferrière). Two or three adult Long-billed Dowitchers were considered southbound migrants at Baie-du-Febvre 25–29 July (R. Piché, B. Dumont, D. Trescak). A Willet at Baie-du-Febvre 2–4 June was identified as belonging to the inornatus ssp. (Y. Dugré); two birds also stopped at Isle-Verte 4 June (F. Shaffer, C. Maurice), and then one at Cacouna 21 June (J. Roy, R. Rousseau). Only two Wilson’s Phalaropes were detected: at Baie-du-Febvre 7 June (m. ob.) and at Saint-Barthélemy 29 July (S. Denault). No breeding records have been confirmed in recent years. Rare in summer in south Québec, 2 immature Little Gulls were discovered at Saint-Barthélemy 24–26 June (L. Simard, J. May), one at Lachine (Montréal) 27 June–6 Aug. (V. Létourneau, m.ob.) and one at Gatineau 4 July (R. Dubois). An adult Laughing Gull at Saint-Barthélemy 30 June was locally unexpected (I. Chavez, C. Araya). Now probably extirpated from the Region as a breeder, a Roseate Tern showed up at L’Istorlet (Magdalen Is) 16–20 July (C. Roy).

Seven different Red-bellied Woodpeckers at Saint-Armand (three adult males, four juveniles) 21 June (N. Bourdon) shows the remarkable success this species has recently enjoyed in this region. A Crested Caracara at Yamachiche 8–9 June (M. Bourassa, m.obs., ph.) was one of the highlights of the season, representing only a 3rd record for the Region. A Tropical Kingbird at Bridgeville, 10 July to mid-Aug. (JF. Rail, S. Gagnon, m.obs.) provided only the 6th documented presence for the province. A Western Kingbird at Grande-Vallée 22 June(R. Besançon) was an unexpected vagrant at this time of the year. Fork-tailed Flycatchers have been reported almost every year since 2005, and this year was no exception, with an immature at Saint-Angèle-de-Laval 7 June (H. Crête, J. Brunelle, J Gélinas, ph.).

A White-eyed Vireo 15–24 July at l’Anse-à-Beaufils (J. Wiseman et al.) was the first ever to be reported in this month. Also particularly noteworthy at this time of the year were two Yellow-throated Warblers, one at Granby 27 June–4 July (C. Côté, m. ob) and another at Mont-St-Hilaire 4 July (R. Boulet). A territorial male Prairie Warbler at Coaticook was last seen 26 June (G. Gilbert, m. ob). The award for the bird of the year goes without a doubt to the Painted Redstart that brightened Domaine de Maizerets, Québec 1–2 June (L. Cossette, D. Larochelle, m. obs. ph), a first presence for the Region and only the fourth in Canada. Extralimital LeConte’s Sparrows this season included two singing males: one at Yamachiche 9–28 June (F. Grenon, L. DenBesten) and another at Pointe-aux-Outardes, 29 July–1 Aug. (J. P. Barry). The only Yellow-headed Blackbird of the season was a male seen in flight at Longueuil 10 June (D. Daigneault). A pair of Orchard Orioles has successfully bred for a second year in a row at Standstead (S. Kohl), while a single male was also observed at Saint-Anaclet-de-Lessard 12 June (R. Saint-Laurent).

Photos–Québec, Summer 2017
Hover or click on each image to read the caption. 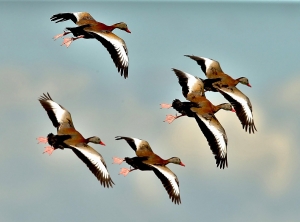 The Black-bellied Whistling-Duck is most often seen in the Region in small flocks in mid-summer, as was the case this season at L’Épiphanie 13 July 2017. Photo by © Jacques Héneault. 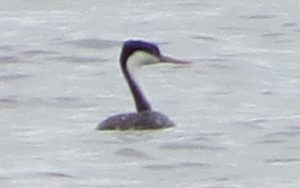 This Western Grebe was found at Gatineau 4 June 2017; the most recent previous provincial record, in 2011, was also from this locality. Photo by © R. Dubois. 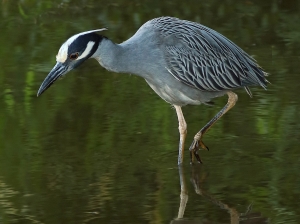 This adult Yellow-crowned Night-Heron, present for a month at Acton Vale (here 15 July 2017), furnished the 14th record for the province. Photo by © Alain Daigle. 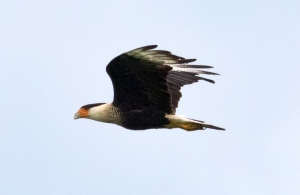 A Crested Caracara at Yamachiche 8–9 June 2017 (here 9 June) was the second documented with a photograph in the province. Photo by © Suzanne Labbé. 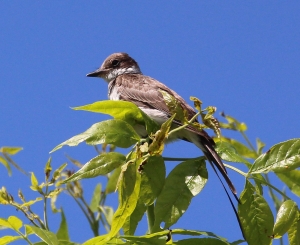 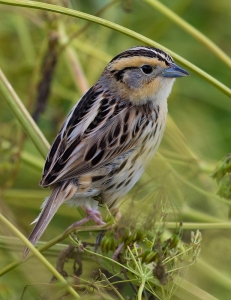 Always rare in southern Québec, this LeConte’s Sparrow spent most of the month of June at Yamachiche. Photo by © Suzanne Labbé. 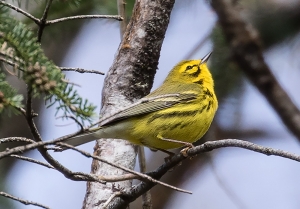 This male Prairie Warbler appeared to defend a territory at Coaticook 11 May–26 June (here 12 May). Photo by © Suzanne Labbé. 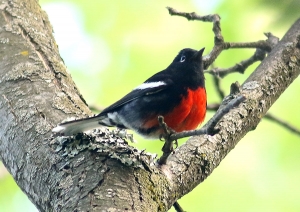 About 4,000 kilometers away from its breeding range in the southwestern U. S., this Painted Redstart caused a big surprise at Québec City 1–2 June 2017. Photo by © Olivier Barde