Spring is a good season to see vagrant birds and this year was no exception. Among the waterfowl, Québec birders had the opportunity to see old world species like Tundra Bean-Goose, Pink-footed Goose, Barnacle Goose, Tufted Duck, and Common Pochard. Furthermore, the record-breaking numbers of Golden Eagles and Broad-winged Hawks southwest of Montréal astounded hawkwatchers. Finally, a Mississippi Kite and a noticeable number of passerines overshot their breeding grounds south of the province.

All records are tentative until official acceptance by the Québec Bird Records Committee.

For the third consecutive year, a Tundra Bean-Goose appeared in the province, this time at Cap Tourmente 15 May, most probably always the same individual travelling around (Philippe Hénault et al.). Following last fall invasion, Pink-footed Geese turned up in nine different localities, including three birds at Granby 27–28 Mar (Samuel Jetté et al.), two at Saint-Paul-de-l’Île-aux-Noix 15–18 Apr (Chantal Trudel, Pascale Berthe) and two at Grondines 23 Apr (Serge Lemieux, Suzanne Blackburn). Single Barnacle Geese were identified at Victoriaville 17–24 Apr (Claude Roy et al.), Bic 23–27 Apr (Rita St-Laurent et al), Saint-Barthélemy 9 May (Joanne Masson), Laval 27 May (François Lapointe), and L’Assomption 29 May (Sylvia Hérédia, Sylvain Proulx). In addition to the Abitibi and the Saguenay regions where the species has already nested, Trumpeter Swans made an appearance this spring in at least six other localities of southern Québec, including a maximum of five birds at Louiseville 10–11 Apr (Luc Lemoyne et al.). Single Tufted Ducks were good finds at Gatineau 3 Apr (Éric Patry), at Saint-Paul-de-l’Île-aux-Noix 18–24 Apr (Emmanuel Milot et al.) and at Sept-Îles 25 Apr–14 May (Patricia Lalonde et al.). A male Common Pochard was present at Saint-Gédéon, in the Lake Saint-Jean region, 8–12 May, providing a second record for the province of Québec and a third for Canada (Laurent Bédard et al.). The first record for Canada also occurred in the province of Québec 2–11 May 2008 (see NAB 62: 375).

An American Avocet stopped at Rouyn-Noranda 27 Apr–21 May (Jonathan Gagnon). An Upland Sandpiper at Fatima 30 May contributed a first record for Les Îles de la Madeleine (André Couture et al.). A Ruff was found at Nicolet 13–May (Yves Dugré, Jean Carpentier). An Arctic Tern photographed at Rouyn-Noranda 23 May was very rare for the Abitibi region (Jonathan Gagnon). A Least Bittern at Tadoussac on the North Shore 27 May (Yannick Lapointe) and another at l’Anse à Beaufils in the Gaspé peninsula 31 May (Yves Giroux) both represented first records for their respective region. A Green Heron at Lake Osisko 23–29 May provided a first occurrence for the Abitibi region (Jonathan Gagnon et al.). An adult Yellow-crowned Night-Heron was photographed at Laval 3 May (Manon English, Jean-Pierre Machet). Glossy Ibis was reported in eight localities with a maximum of three birds at Saint-Jean-sur-Richelieu 15–16 May, accompanied by a presumed White-faced Ibis X Glossy Ibis hybrid (Ghislaine Boulet, Réal Boulet).

A Lark Sparrow at Authier-Nord (Abitibi) 26 Apr (Cécile Plante) was one of the very few records known for this month. The adult Golden-crowned Sparrow present at Rimouski during the winter was last seen 16 Apr (Alexandre Anctil). The Harris’s Sparrow that overwintered at Saint-Rosaire continued until 27 Apr (Martine St-Louis), while another bright adult was enjoyed by many at Roberval 9–14 May (Josée Rousseau).

A Yellow-breasted Chat at Baie Lavallière (Sorel) 21 May (André Lanouette) was unexpected. A male Yellow-headed Blackbird visited Inukjuak 21–22 May (Annie Samksack, Mark Basterfield) providing a first record for Nunavik. A Western Meadowlark was nicely documented at Saint-Siméon (Gaspésie) 31 May (Sylvie Landry, ph.). Three Orchard Orioles were back to their nesting site at Pike River 18 May for the fifth consecutive year (Michel Asselin et al.); so far, it is the only regular breeding site for this species in the province. A Worm-eating Warbler was well described at Saint-Hyacinthe 13 May (Nelson Roy). A Louisiana Waterthrush at Shefford 26 May provided a new location for the species (Samuel Jetté, ph.). A Prothonotary Warbler made a brief appearance at Luskville 18 May (Langis Sirois, Hervé Tremblay). A Kentucky Warbler was reported at Victoriaville 19 May (Jean Ducharme). A male Hooded Warbler was nicely photographed at Saint-Timothée 14 May (Bruno Barrière). Summer Tanagers were sighted in six localities, the northernmost being a beautiful male, 20 km north of Eastmain, James Bay 16 May (Stéphanie Varty). A male Scarlet Tanager at Blanc Sablon 14 May was outside of its regular range (Lucia Purcell, ph.). A female Blue Grosbeak visited a feeder at Matane 2 May (René Côté, fide Jules Alex Banville). A male Lazuli Bunting was photographed at Rivière-Saint-Jean (Minganie) 5–7 May providing the sixth record for the province (Réal Poulin et al.). 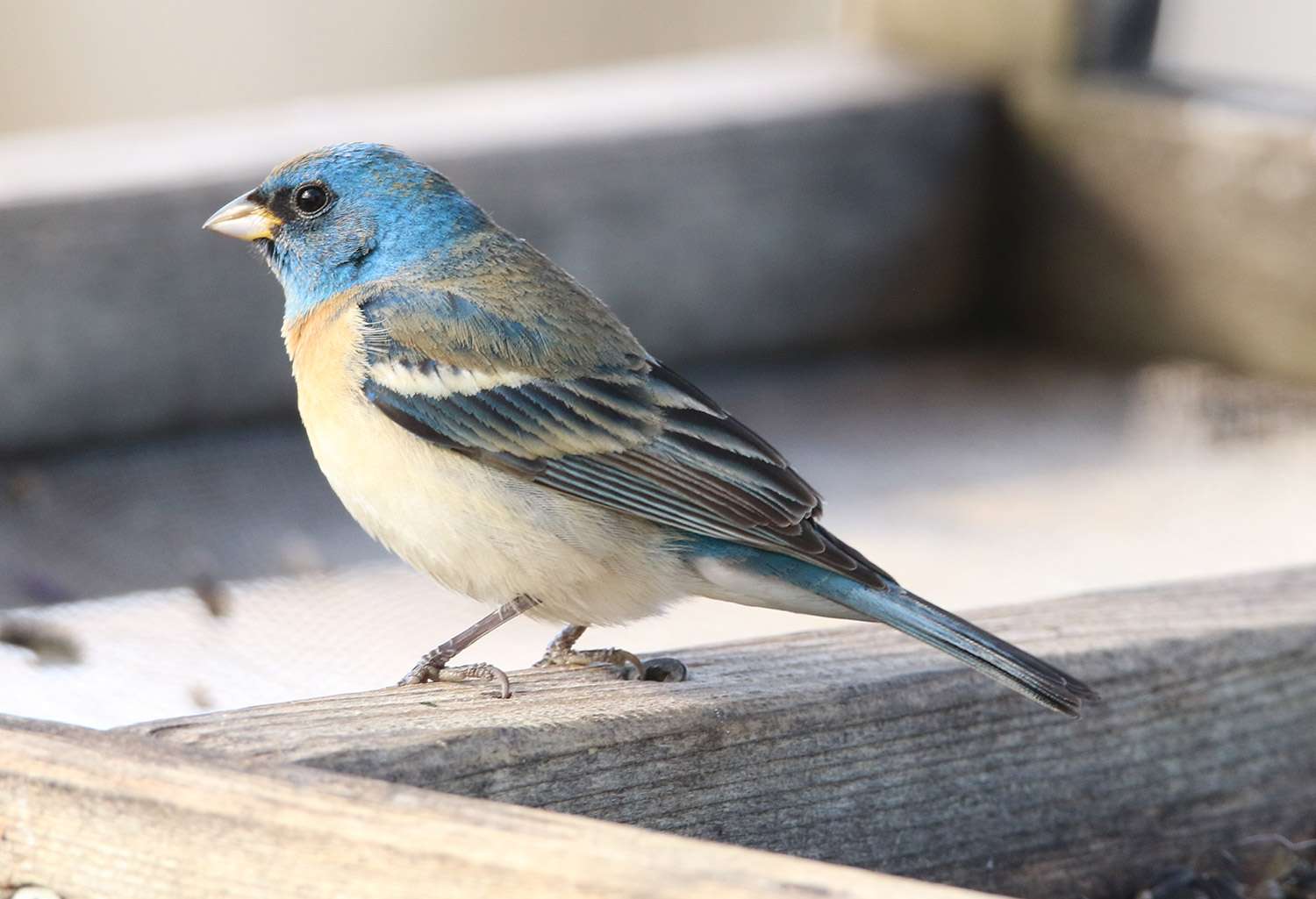 A very rare vagrant from the west, this male Lazuli Bunting, the sixth reported in the province of Québec, was present at Rivière-Saint-Jean on the Lower North Shore 5–7 May 2022 (photographed here on 5 May). Photo © Réal Poulin. 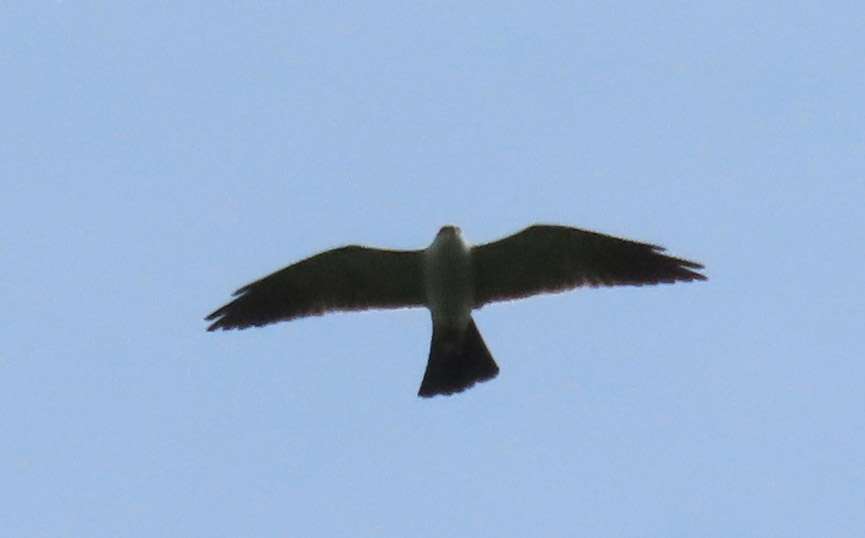 This Mississippi Kite photographed at Saint-Valérien-de-Milton, in the province of Québec 16 May 2022, rapidly flew over without being noticed again. Photo © Daniel Demers. 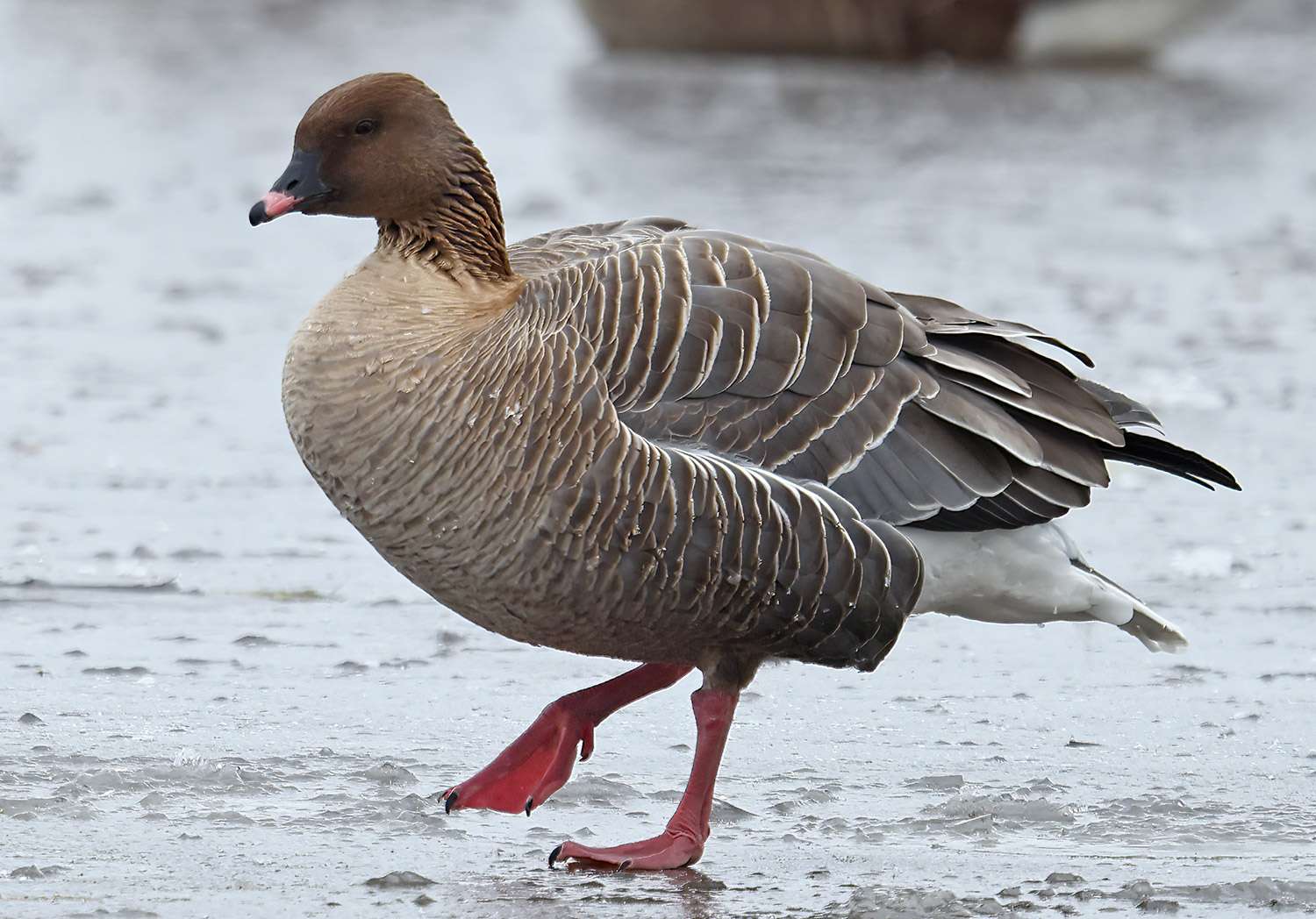 The Pink-footed Goose, a vagrant from Greenland and Europe, is increasingly reported during migration in the province of Québec. This individual was photographed at Drummondville 29 Mar 2022. Photo © Daniel Jauvin. 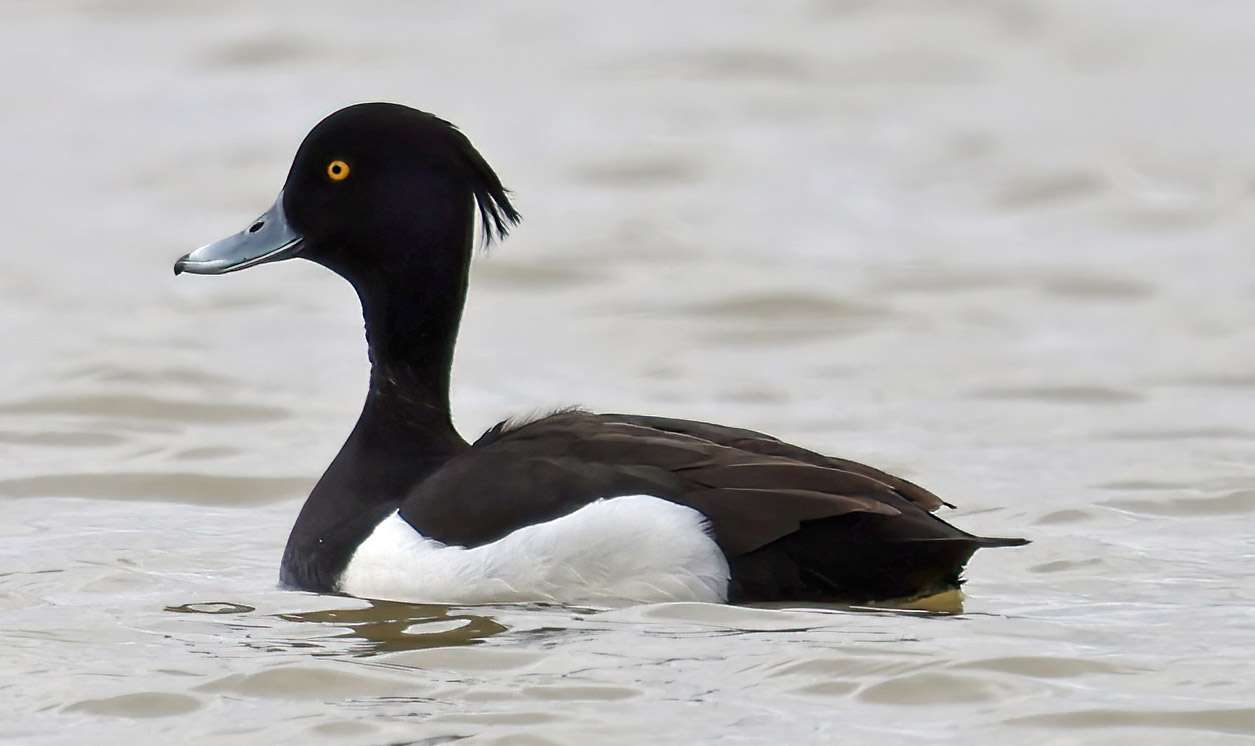 This male Tufted Duck present at Saint-Paul-de-l’Île-aux-Noix 18–24 Apr was one of three recorded in the province of Quebec in spring 2022. It was photographed here on 20 Apr. Photo © Daniel Jauvin. 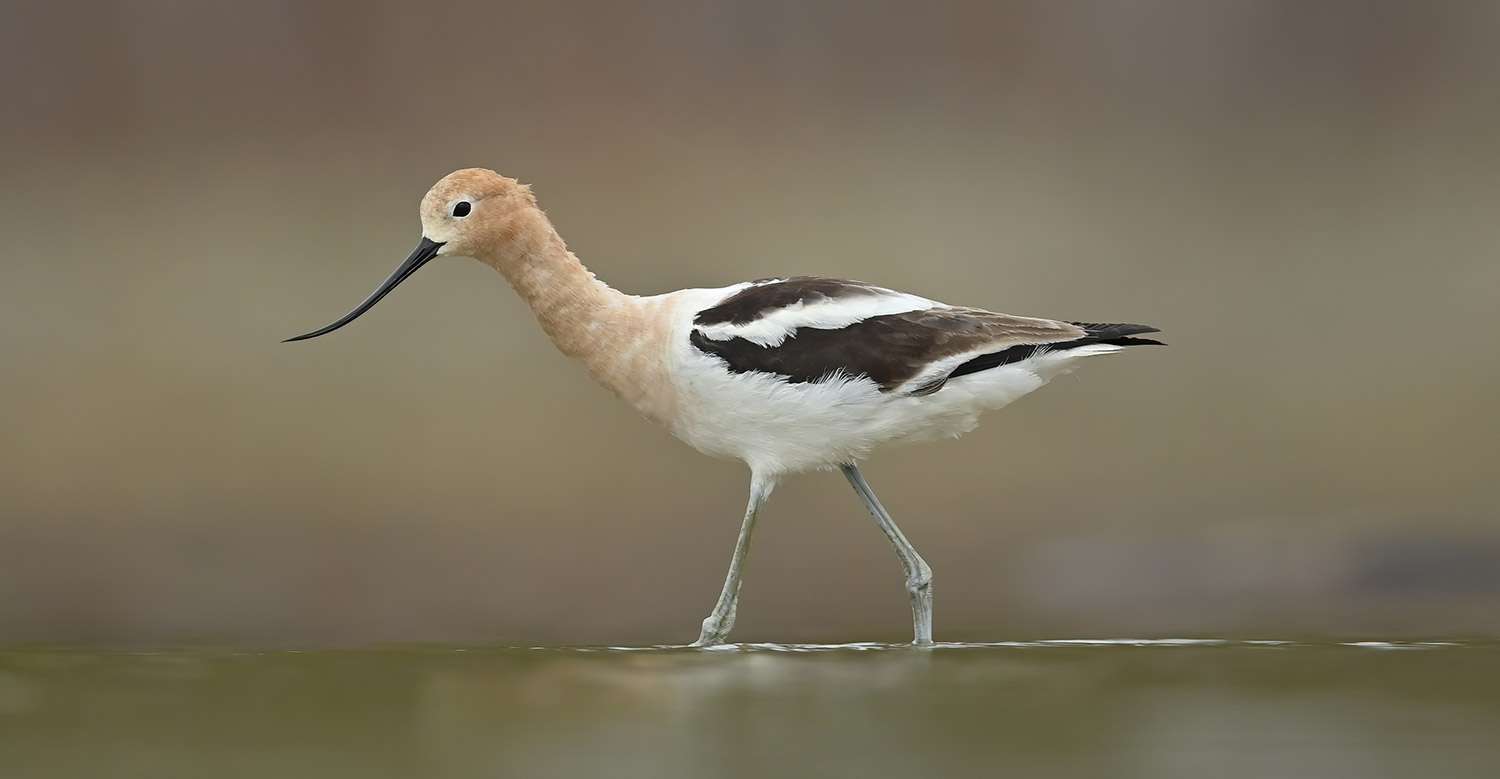 An attractive visitor from the west, the American Avocet has been recorded almost 60 times in the province of Québec. This individual was present at Rouyn-Noranda 27 Apr–21 May 2022 (here photographed on 11 May). Photo © Raymond Ladurantaye. 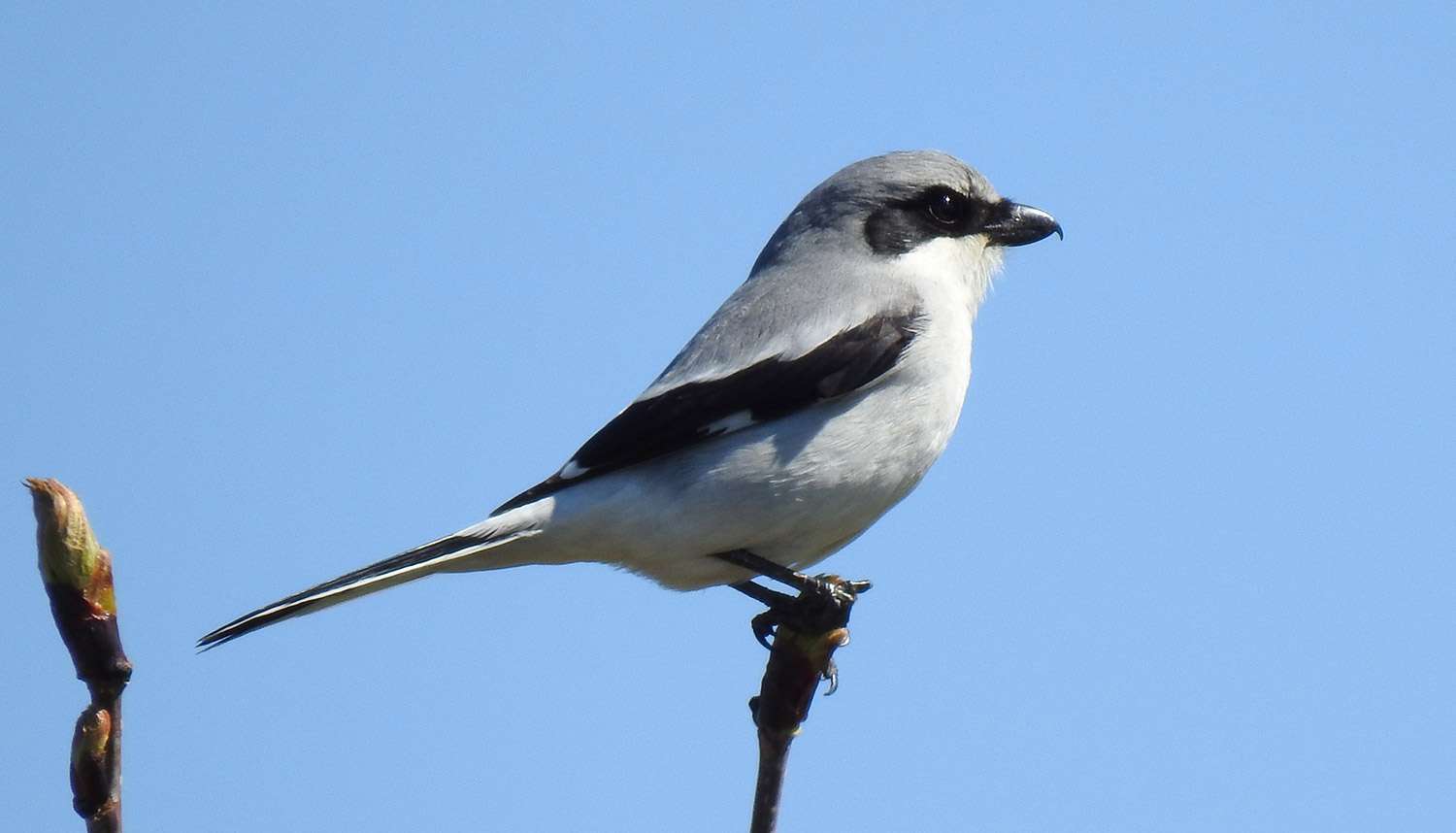 The Loggerhead Shrike has probably been extirpated from the province of Québec as a nesting species but still shows up occasionally. This individual was photographed at Sainte-Félicité 24 May 2022 but did not reappear thereafter. Photo © Jules-Alex Banville. 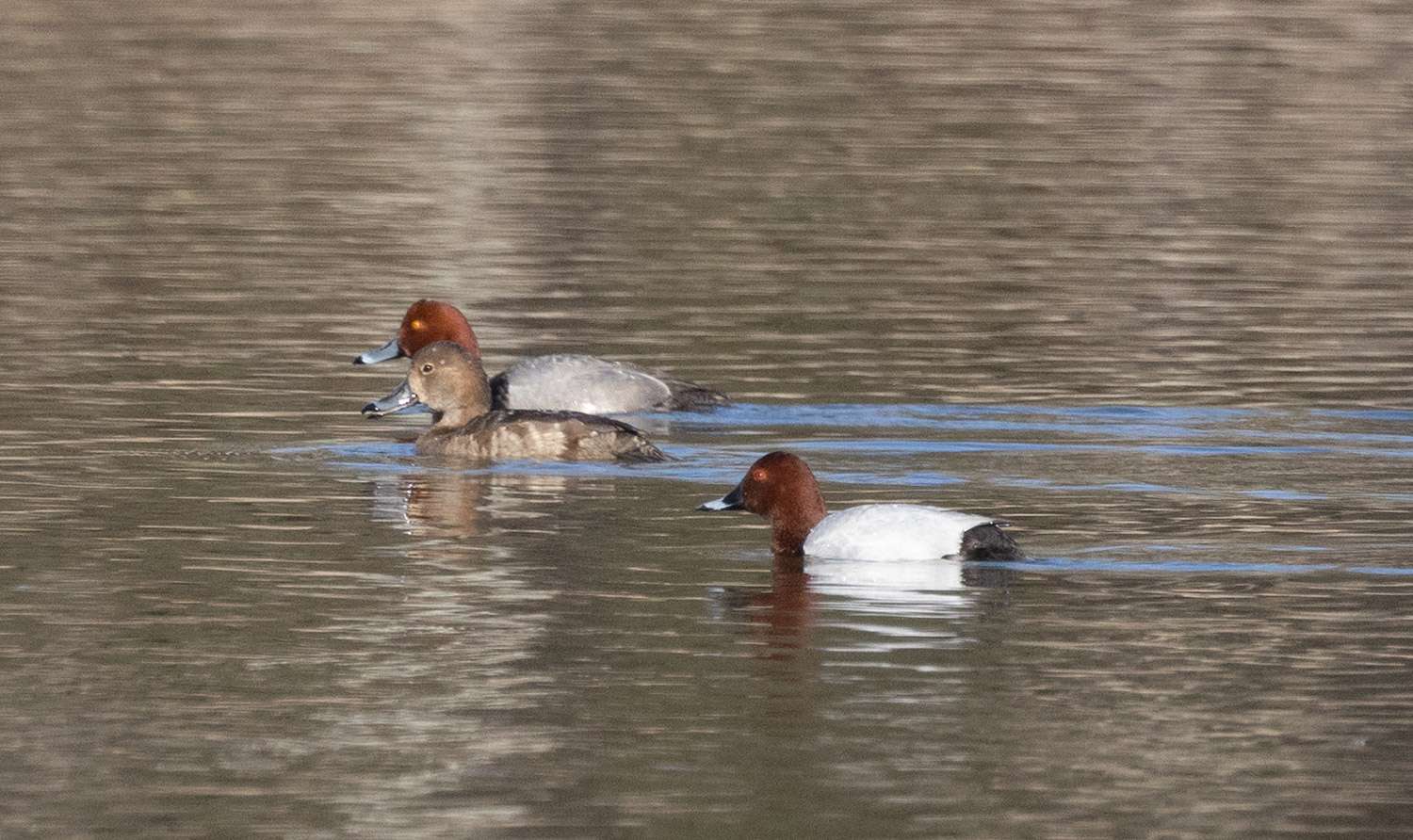 This male Common Pochard present at Saint-Gédéon 8–12 May 2022 caused a lot of excitement among the province of Québec birding community. It was photographed here in the company of a pair of Redhead on 10 May. Photo © Suzanne Labbé. 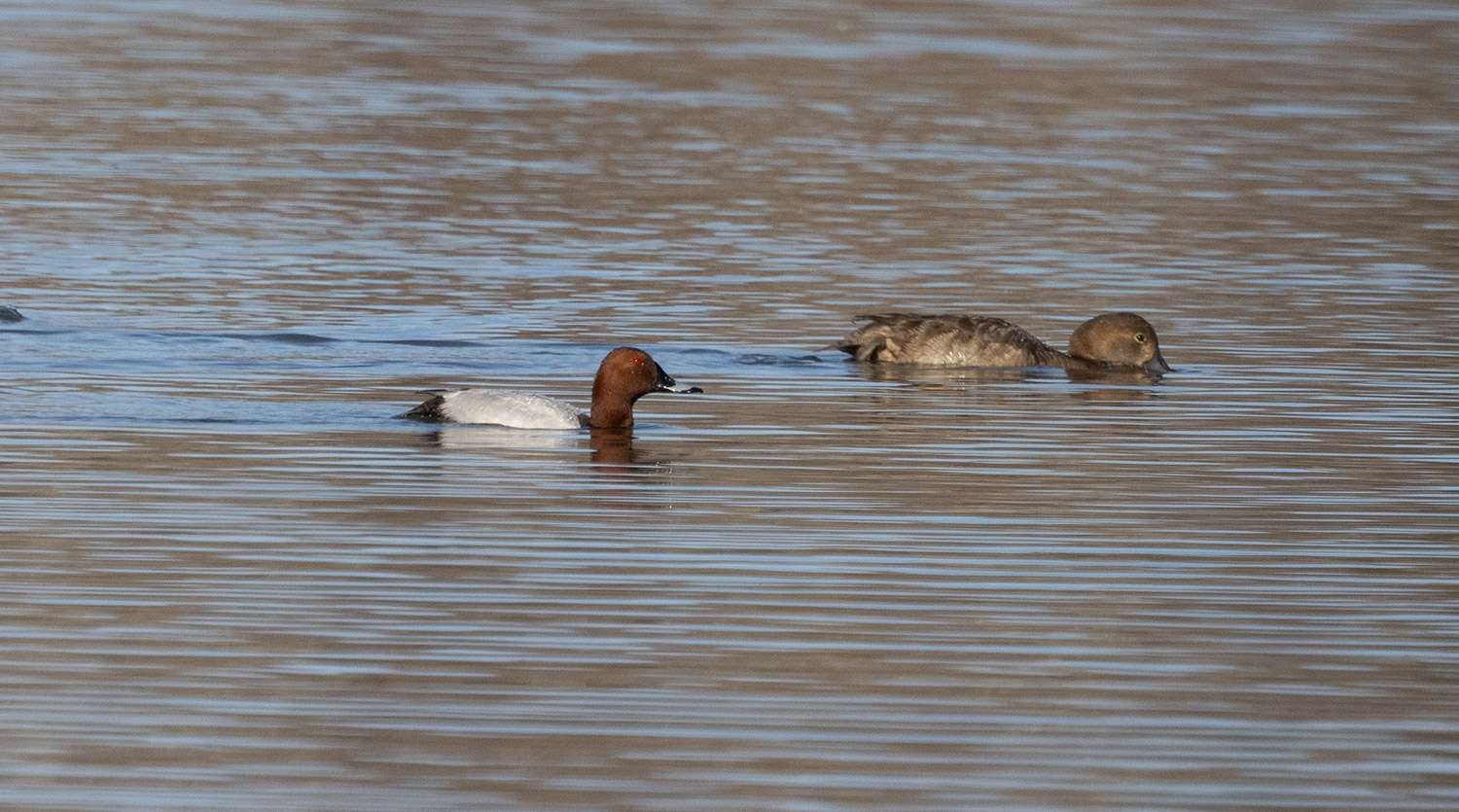 This male Common Pochard present at Saint-Gédéon 8–12 May 2022 caused a lot of excitement among the Québec birding community. It was photographed here with a female Redhead on 10 May. Photo © Suzanne Labbé. 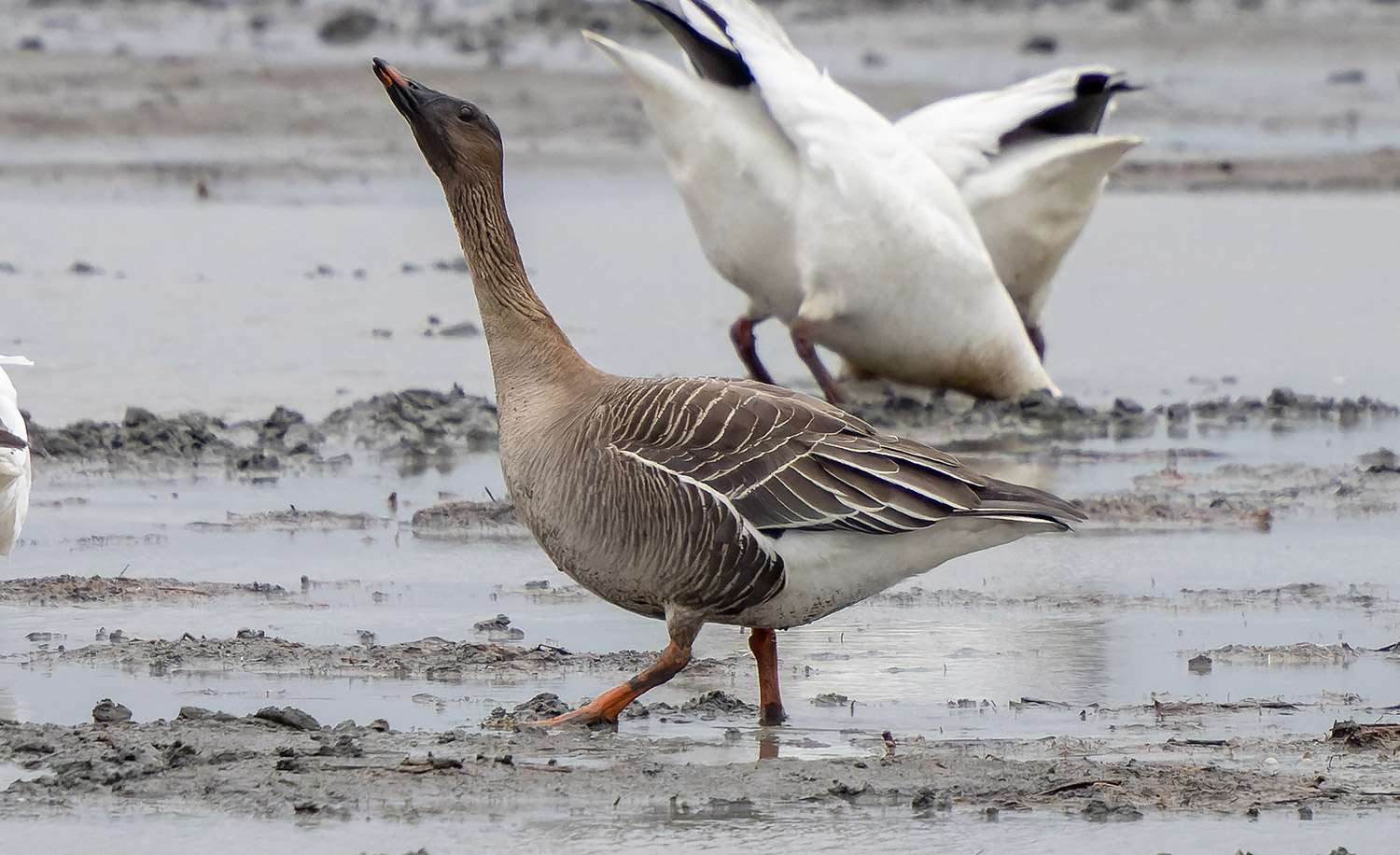 This Tundra Bean-Goose, most probably the same individual, was recorded in the province of Québec for the third consecutive year. It was photographed here on 15 May 2022. Photo © Frédérick Lelièvre. 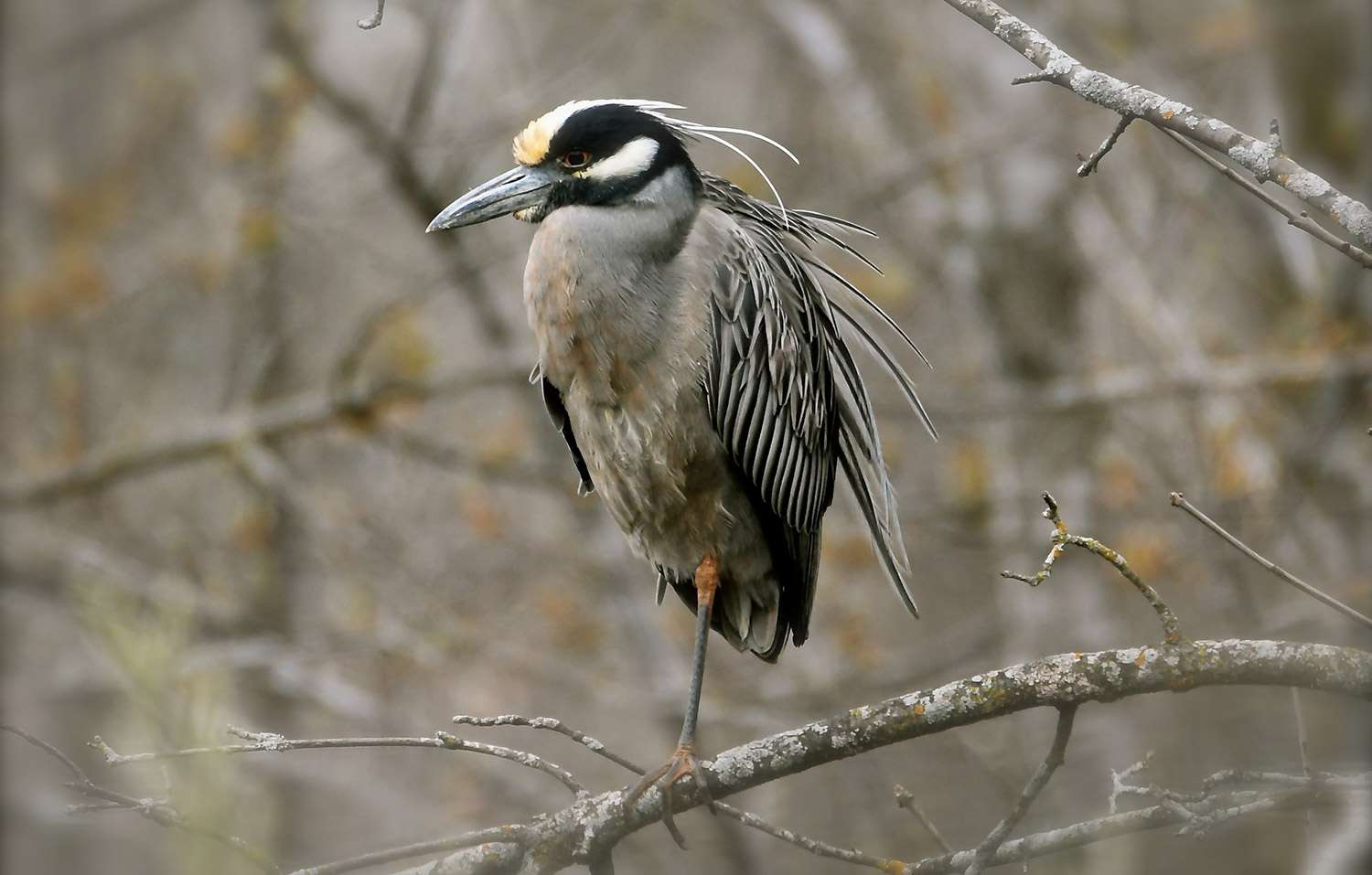