Overall, spring 2021 was dry accompanied with temperatures above normal. March was very dry but ended with significant amounts of rain. April brought dry, warm weather to most of the province with the exception of eastern Québec where rain and snow amounts were above normal. May continued dry with only 12 mm of rain at Montréal. Temperatures were above normal but with a cool period at the end of the month. Provincial mega rarities included Steller’s Eider, Neotropic Cormorant, Vermilion Flycatcher and Fish Crow. Please take note that some of the rare occurrences addressed in this report are still awaiting official acceptance by the Québec Bird Records Committee.

Single Pink-footed Geese paused at Mirabel 1–2 Apr (S. Guertin et al.), Laval 4 Apr (P. Franche, A. Gosselin), Bic 14 Apr (J. Roy-Drainville) and 2 May (F-X. Grandmont) as well as at Rimouski 14–15 Apr (V. Giroux). Single Barnacle Geese were reported in 6 different municipalities. A Barnacle Goose X Canada Goose hybrid was photographed at Lacolle 16 Mar (D. Jauvin). A very early migrating Trumpeter Swan stopped at Brownsburg-Chatham 3 Mar providing a record date for the province (D. Corbeil, É. Charron). In addition to the Abitibi region where the species is now nesting annually, pairs reappeared this year at Saint-Étienne-de-Beauharnois, Saint-Fulgence and Baie-du-Febvre where they spent last summer. The pair of Tundra Swan that overwintered at Les Îles-de-la-Madeleine was last noticed 16 Apr (DG. Gaudet). Migrants were encountered in a small number of localities, notably along the Richelieu river. A male Garganey at Rivière-Ouelle 23 Apr was a welcomed sight (C. Auchu). A Eurasian Wigeon X American Wigeon hybrid was present at Saint-Étienne-de-Beauharnois 13–27 Apr (B. Lepage, P. Pontbriand, et al). Also rare, a Ring-necked Duck X Greater Scaup hybrid lingered at Chambly 3 Apr–1st May (O. Barden et al.). Single Tufted Ducks at Baie-Comeau 16–19 Apr (JP. Barry et al.) and at Sept-Îles 15–28 May (B. Duchesne et al.) were not completely unexpected. However, certainly the most jaw-dropping bird of the season was an adult male Steller’s Eider at Pointe-des-Monts (Lower North Shore) feeding with Common Eiders 29–30 May (E. Hains, JP Barry, ph.). The only records on file for the province of Québec were 2 specimens collected in 1898 also on the Lower North Shore.

An American Avocet enchanted Port-Cartier 30 May (JF. Laporte, N. Vibert). A Purple Sandpiper at Gatineau 23 Apr–13 May was out of range (R. Dubois, JP. Ruddy et al.) while a Pectoral Sandpiper at Rimouski 31 Mar was only the second Mar record for the province (V. Giroux, A. Florea). Always rare out of Les Îles-de-la-Madeleine, single Willets were identified at Saint-Joseph-de-Beauce 12 May (M. Grenier), Île des Soeurs (Montréal) 23–24 May (F. Saint-Arnaud et al.), and Contrecoeur 24–29 May (D. Tétreault et al.). In recent years, the number of migrating Wilson’s Phalaropes recorded has been unpredictable. This year, birds were reported in at least 20 localities with an estimated total of 50 individuals—a peak for the last 2 decades. A Parasitic Jaeger was locally rare at Gatineau 9 May (R. Dubois). Southern Québec was gratified with several Little Gulls, notably four first-summer birds at Île des Soeurs (Montréal) 24 May (S. Denault).

An immature Neotropic Cormorant at Gatineau 22 Apr–15 May provided a second record for the province (R. Bisson et al.). Amazingly, the bird appeared at almost the same place where an adult had been recorded in Apr 2018. Four American White Pelicans found at Gatineau 21 May (S. McCarthy, R. Dubois) were relocated at Ile des Soeurs 21–22 May (C. & S. & J. Carson) and later the same day in eastern Montréal (Y. Gauthier). Southern Ardeidae included single Snowy Egrets at Sainte-Anne-des-Plaines 29 Apr (P. Mourant) and at Berthierville 3–4 May (M. Bourassa et al.), single adult Little Blue Herons at Saint-Anaclet-de-Lessard 16 Apr (D. St-Pierre, J. Veillette), and at Pabos 14–20 May (J. Blais et al.) and an adult Tricolored Heron at Cap Tourmente 16–31 May (C. Girard et al.). A single Cattle Egret was at Terrebonne 11 Apr (B. Lavoie et al.) while Glossy Ibis were seen in 8 municipalities with a maximum of 6 at Saint-Paul-de-l’Île-aux-Noix 11 May (M. Landry et al.) and a bird found as far north as Lourdes-de-Blanc-Sablon 26–29 May (K. Wellman, J. Monger, V. Buckle).

A Black Vulture with a patagial tag photographed at Gascons (Gaspésie) 14 Apr had been tagged at Hershey, Pennsylvania in Oct 2020 (L. Roussy). Otherwise, single birds were found in 5 different municipalities. A dark-morph calurus or putative abieticola Red-tailed Hawk was photographed at Laval 18–27 Mar (L. Turcot et al.). A female Northern Saw-whet Owl with a brood patch was mist-netted at the McGill Bird Observatory (Sainte-Anne-de-Bellevue) 13 May (S. Duval). This gives strong support for a first nesting record on the island of Montréal since 1952.

An adult Red-headed Woodpecker at Val-des-Monts 16–31 May onwards (A. Lawes et al.) and up to 2 adults at Racine 25–31 May (C. Larocque) were the only ones of the season. An adult male Vermilion Flycatcher brightened Boisé Sainte-Dorothée (Laval) 28–31 May, representing a third record for the province and the second in less than a year (J. Boismenu). A White-eyed Vireo in the Montréal Botanical Gardens 16 May (O. Barden et al.) was part of a bonkers migration day for the site. Recorded twice previously in 2012 and 2019, it was a big surprise to find up to 3 Fish Crows at Magog 11 Apr–31 May (É. Tremblay, B. Turgeon et al.). Numerous signs of breeding including nest building were recorded throughout this period. Single birds were also heard calling in Mont-Royal Park 8 May (S. Denault), and at Philipsburg 16 May (O. Barden), suggesting an unprecedented influx in the north. The Varied Thrush that spent part of the winter at Île Bizard (Montréal) remained until 26 Mar (F. Bussière et al.).

The Lark Sparrow that overwintered at Saint-Charles-de-Bellechasse was last reported 11 May (G. Jean) while the Golden-crowned Sparrow that did the same at Rimouski was last seen 7 Apr (J. Rocheteau). The Spotted Tohwee that spent the winter at a feeder at Grande-Rivière was last seen 21 Mar (A. Leblanc). An elusive Yellow-breasted Chat briefly stopped at Lévis 26 May (S. Bégin, L. Plante).

It was an impressive spring for Yellow-headed Blackbird with reports from at least seven locations. Again this year, a Western Meadowlark showed up at Grandes Bergeronnes 8 May (S. Delisle, D. Guillemette) and probably the same was refound at Les Escoumins 24 May (P-A. Dumas et al.). Orchard Orioles were sighted from eight different localities, including a male at Baie-Comeau 29 May (M. Létourneau) and a female at Les-Îles-de-la-Madeleine 28-30 May (A. Richard et al.).

A Louisiana Waterthrush at Mount-Royal Cemetery (Montréal) 5 Apr provided a record early date for the province (N. Wathier, D. Tétreault, G. Levtchouk,). It was a good spring for Blue-winged Warbler with reports from four different sites, including one at Otterburn Park 16 May (P. Bergeron) and one at Île Bizard 20 May (K. Bell). A male Prothonotary Warbler was observed building a nest at Sainte-Foy (Québec city), 23–31 May, for a female that never came (A. Anctil, HM. Johansen). An Orange-crowned Warbler at Baie-du-Febvre 17 Apr was record early (J. Lachance). A female Hooded Warbler was mist-netted twice at Grandes-Bergeronnes 17–18 May (P-A. Dumas et al.), providing a first record for the North Shore. A Palm Warbler at Laval 27 Mar was record early for the province (M. Bouchard). A Yellow-throated Warbler visited Montréal Techno-Park 8–9 May (M. Romer, B. Soutar et al.). 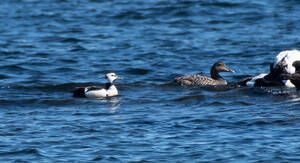 Completely unexpected in eastern North America, this male Steller’s Eider photographed here on 29 May 2021, spent 29–30 May with Common Eiders at Pointe-des-Monts on the north shore of the St-Lawrence River, Québec. Photo © David Turgeon. 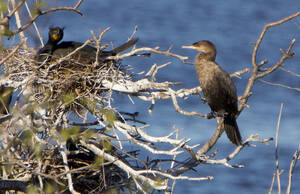 This first-year Neotropic Cormorant was the second for the province of Québec and also for the town of Gatineau. Photographed here on 26 April 2021, it was present 22 April–15 May. Photo © Normand Laplante. 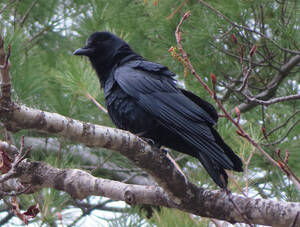 This Fish Crow photographed here at Magog, Québec on 25 April 2021, was one of a small group of three first identified on 11 April and present through the end of the period. Photo © Chantal Labbé. 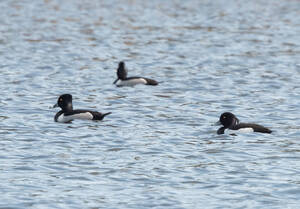 This male Tufted Duck was one of a total of 24 Québec provincial records. Photographed here at Baie-Comeau on 17 April 2021, it was present 16–19 April. Photo © Marc Dallaire. 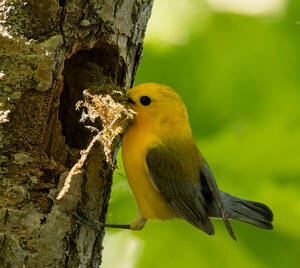 This striking male Prothonotary Warbler was photographed while carrying nesting material to a potential nesting site on 23 May 2021 at Sainte-Foy, Québec. The bird was present 23–31 May. Photo © Maurice Pitre. 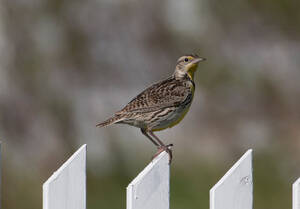 This Western Meadowlark, a regular vagrant from the west, was photographed on 24 May 2021 at Les Escoumins, Québec. Photo © David Turgeon. 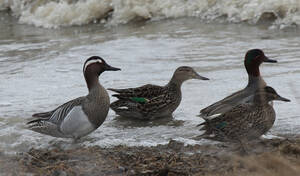 This male Garganey was photographed on 23 April 2021 at Rivière-Ouelle, Québec. There are an astonishing 17 previous records of this potentially rare vagrant in the province. Photo © Claude Auchu. 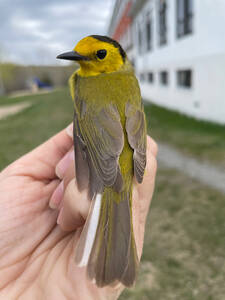 This female Hooded Warbler was captured and banded at the Grandes-Bergeronnes banding station on 17 May 2021. This species is a regular southern spring vagrant in the province of Québec. Photo © Photo Andra Florea. 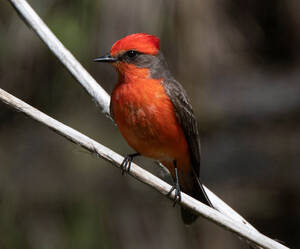 This stunning male Vermilion Flycatcher photographed at Laval on 29 May was only the third to be seen in the province of Québec. The bird was present 28–31 May 2021. Photo © Cristina Araya. 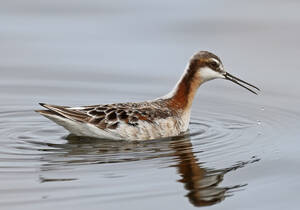 This gorgeous female Wilson’s Phalarope was photographed at Baie-du-Febvre, Québec on 8 May 2021. More than 50 birds were reported this spring in the province. The severe drought in the prairie provinces may have been responsible for a more easterly migration pattern of this species. Photo © Daniel Jauvin. 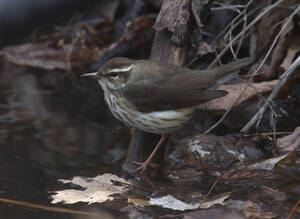 This Louisiana Waterthrush was photographed in the Mount-Royal cemeteries on the record early date of 5 April 2021. This species is a very local nesting bird in the most southern portion of the province of Québec. Photo © Samuel Denault.