Overall, spring 2020 was slightly cool in the south but milder in the north. March was 3ºC above normal south of the St. Lawrence River, with precipitation also above normal. April started mild but turned cool with precipitation below normal. May was dry and cool but ended up with four days of scorching heat late in the month. The most surprising find of the season was a handsome Hooded Oriole.

A group of 6 Greater White-fronted Geese at Hinchinbrooke 27 Mar was worthy of note (I. Chavez, C. Araya). Pink-footed Geese included single birds at Saint-Blaise 16 Mar (A. Lanouette), at Sainte-Catherine 22 Mar (S. Robert et al.), at Baie-du-Febvre 4 Apr (D. Jauvin, J. Lavoie), at Pabos 8 Apr (JM. Smith), and at Sainte-Luce 29 Apr (V. Giroux). Single Barnacle Geese were seen in 8 different localities, plus two additional birds at Saint-Blaise 14–15 Mar (S. Riel, m.ob.). For the second consecutive year, a Barnacle Goose × Canada Goose hybrid was photographed at Saint-Jean-sur-Richelieu 18 Mar (S. Duchemin, M. Bélanger et N. Gendron). A Mute Swan lingered at different locations around the Québec City area 30 Apr–27 May (m. ob.). East of their expected migration corridor in western Québec, two Trumpeter Swans stopped at Beauharnois 23 May (F. Hareau) and 2 more were reported at Baie-du-Febvre 27–30 May (m. ob.). Up to 8 Tundra Swans lingered at Saint-Anicet 17–31 Mar (m. ob.). One was also reported at Irlande 17–27 May (AM. Galand). Single Green-winged Teals (ssp crecca) were noted at La Martinique (IDLM) 1 May (C. Roy, A. Richard), and at Sept-Iles 19 May (C. Lalonde). Very rare in spring for Abitibi region, 3 Canvasbacks stopped at Matagami 7 May (MH. Bousquet) and 4 at Rouyn-Noranda 10 May (J. Gagnon). Single Tufted Ducks appeared at Sept-Îles 2–3 May and again 30 May (B. Duchesne, P. Lalonde) and then at Beauport 5 May (G. Cyr, G. Lord). Wild Turkeys continued to spread east as evidenced by one at Saint-Fabien 29 Apr (L. Saint-Laurent) and one at Saint-Anaclet 3 May (M. Jaffré).

An American Avocet at Gatineau 20 Apr was record early for the province (D. Dallaire et al., ph.), while another one was spotted at Contrecoeur 30 May (D. Tétreault). Rare in spring, single American Golden-Plovers were located at Berthier-sur-Mer 4 Apr (C. Deschênes), Rivière-du-Loup 31 May (JC. Pelletier), and Réservoir Baskatong 31 May (MA. Monpetit). A Willet made a stop at Baie-du-Febvre 28 May (M. Lachance et al.). Rare on the island of Montréal, a pair of Wilson’s Phalaropes paused at Anjou 14–15 May (O. Barden et al.).

Single Great Cormorants at Carillon 10 May (A. Chevrette) and at Verdun 10–30 May (D. Demers, m.ob.) were noteworthy for these inland localities. Single American White Pelicans were discovered at Châteauguay 4 May (C. Trudel, P. Berthe) and at Saint-Anicet 30–31 May (É. Meunier, F. Robillard). A flock of 9 birds on Lake Abitibi 25 May was remarkable (G. Audet). A Least Bittern at Saint-Timothée 18 Apr was surprisingly early (F. Gravel, S. Couillard). Single Little Blue Herons turned up at Sainte-Anne-des-Monts 19 May (G. Chabot) and at Rivière-Ouelle 26–28 May (S. Dionne, M. Borjia). A Cattle Egret showed up at Longueuil 26 May (D. Bird). An adult Yellow-crowned Night-Heron was photographed at Bécancour 11 May (Isab-I Sav). Glossy Ibis included one at Saint-Siméon de Bonaventure 24–26 Apr (J. Lamarche), 3 at Mirabel 5–7 May (D. Corbeil), one at Stoke 17–18 May (D. Langlois, B. Turgeon), one at Rivière Ouelle 21 May (B. Borgia) and finally 3 at Beauharnois 31 May (C. Samoisette-Pilon, MP Langlois). Black Vultures continued to spread into southern Québec as shown by at least 9 records this spring. Sightings of migrating Short-eared Owls were much more numerous than usual during the last week of April in Abitibi, Lac Saint-Jean and Lower North Shore regions. In fact, data from eBird for the whole province showed almost 10 times more sightings compared to the mean of the last 10 years. Whether this increase was weather-related or resulted from an abundance of prey in their habitat remains unknown.

The only Red-headed Woodpecker of the season was at Québec City 31 May (A. Giroux). A singing Acadian Flycatcher was recorded with a cell phone at Sorel-Tracy 27 May, providing one of very few documented records for the region (J. Lemoyne). A Say’s Phoebe at Vinton  (Pontiac) 3 May was a great find (M. Baril, ph.).

A White-eyed Vireo visited Sainte-Foy 24–28 May (A. Terrigeol et al.). Rare in spring, single Northern Wheatears stopped at New Carlisle 8 May (M. Bradet) and at Rivière-Éternité 24 May (Y. Fleury, A. Lavoie, M. Bélanger).

A presumed hybrid Field Sparrow × Chipping Sparrow was photographed at Matane 1 May (JA. Banville). A Grasshopper Sparrow at Luskville 2 May tied the provincial record early date set in 1981 (E. Patry), while 3 birds at Bristol 16–19 May (E. Patry) were more expected. A third Harris’s Sparrow in 2020 was discovered at Trois-Rivières 1 Apr (Charlie Webb, ph.). A LeConte’s Sparrow nicely photographed at Châteauguay 13 May was both out of range and an early migrant (J. Dubé). A Yellow-breasted Chat at LaSalle 19 May (S. Robert et al.) was only the third record ever for Montréal and the first documented by photos.

Yellow-headed Blackbird had a good show up with individuals reported at 9 locations, including one at Blanc Sablon  (Lower North Shore) 10–21 May (J.Joncas). A singing male Western Meadowlark brightened Aylmer 17–18 May (G. Rand, D. Dallaire). Increasingly reported in spring, Orchard Orioles were seen in 9 different localities, including one as far north as Pointe-aux-Outardes 23 May (R. Beaupré). An adult male Hooded Oriole photographed at hummingbird feeders in three different localities over a period of five days might seem almost unbelievable, but here is the sequence of events: the first report occurred at Blainville 8–9 May (Francine Petitclerc), the second report, 97 miles to the east at Victoriaville 11 May (Lou Rondeau, m.ob), and the third report 32 miles further east at Disraéli 12 May (C. Beauregard). Whether there was more than one bird involved in this case will remain a mystery. A singing male Louisiana Waterthrush was filmed in Gatineau Park 17 May (F. Bédard). A male Lawrence’s Warbler (F2 hybrid) was nicely photographed at Godmanchester 22 May (J. McGill). A Yellow-throated Warbler at Cap Tourmente 20 May (M. Raymond) was amazingly the thirty-sixth species of warbler to be found at this hotspot. A male Prairie Warbler made a brief appearance at Saint-Jean-Port-Joli 24 May (Marie-Hélène Saint-Pierre, ph).

Single Summer Tanagers were found at Cantley 30 Apr (R. Venne Landry), Saint-Bernard-de-Lacolle 14 May (A. Sylvain), Ile de la Visitation (Montréal) 18 May (J. Coutu, S. Demers), Saint-Jean-sur-Richelieu 23 May (J. Ricard, m.ob.), and Les Escoumins 31 May (D. Turgeon, C. Émond). Surprisingly regular in spring in the region, single Western Tanagers stopped at La Patrie 22–29 Apr, providing a record early date for the province (E. Dubreuil et al.) and another one at Pointe-aux-Outardes 22 May (C. Gagnon). Not as numerous as last year, there were two reports of Blue Grosbeak this season, with a first year male at Neuville 16–17 May (A. Tremblay, N. Robert), and an adult male at Stoneham 15–17 May (S. Baillargeon) An adult male Painted Bunting at Percé 12–15 May (B. Laflamme) allows 2020 to be the eight consecutive year with this species reported in the Region, a major increase compared to the precedent period.

Photos–Québec: Spring 2020
Hover or click on each image to read the caption. 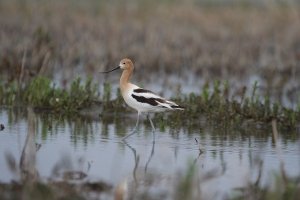 This elegant American Avocet was photographed at Contrecoeur on 30 May 2020. There are only about 20 records in the province for the last 20 years. Photo © Denis Tétreault. 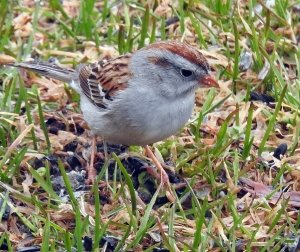 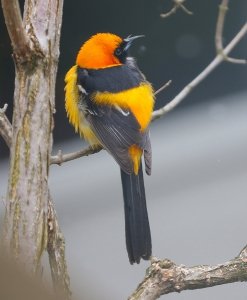 This spring, the Hooded Oriole appeared for the 4th time in the province, but this year was memorable because it showed up at 3 different locations during a five-day period. Here it was photographed at Blainville 8 May 2020. Photo © Francine Petitclerc. 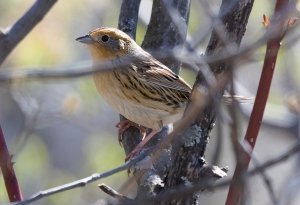 The LeConte’s Sparrow is nesting almost exclusively in the Abitibi-Témiscamingue region in northwestern Québec. It is quite rare elsewhere in the province, even more in the southwest. This individual was photographed at Châteauguay, Montérégie, 13 May 2020. Photo © Jocelyn Dubé.

The Northern Wheatear is a rare breeder in northern Québec. It is rare but regular in migration in eastern Québec. This individual was photographed at Rivière-Éternité, Saguenay 24 May 2020. Photo © Yannick Fleury. 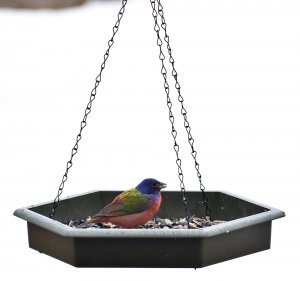 The Painted Bunting is increasingly reported in the province of Québec. There are now close to 30 records in the Region of which 15 were in the last decade. This male was photographed at Val d’Espoir (Percé) 12 May 2020. Photo © Bernadette Laflamme. 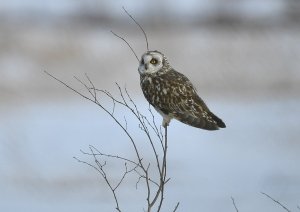 The Short-eared Owl made a remarkable appearance at latitude 48°-49° in the last week of April. Birds were particularly numerous in Abitibi, Lac Saint-Jean and Lower North Shore regions. This male was photographed at Val d’Or (Abitibi) 25 April 2020. Photo © Raymond Ladurantaye. 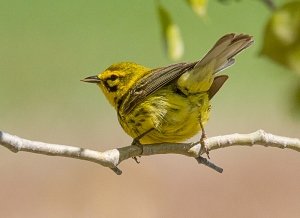 The Prairie Warbler appears almost annually in the Region but has not nested yet. This male was photographed at Saint-Jean-Port-Joli 24 May 2020. Photo © Marie-Hélène Saint-Pierre.