Overall, spring 2019 was cool and more wet than normal. May was the eighth consecutive month with temperatures below normal. In western Québec, severe flooding in April and May were responsible for the evacuation of 10,000 victims, and caused damages to 6,000 residences. A few occurences of diurnal reverse migration were witnessed at the Tadoussac Bird Observatory in late May, but nothing as spectacular as last year. Two new species were added to the Québec bird list: Common Woodpigeon, also a first for North America, and Black-necked Stilt. Fish Crows were also a good find.

A Common Woodpigeon was seen and photographed at La Romaine (Lower North Shore) 5–13 May by Denis Desjardins and identified from the photographs by his son, Adam Desjardins. This record seems to be a first not only for North America but also for the New World. This highly migratory species, abundant in Europe, appears to be slowly colonizing Iceland in recent years. Rarely expected in southern Québec, a White-winged Dove was observed at Saint-Hyacinthe 24–26 May (Sylvie Boulet). A Chimney Swift located at Pincourt 13 Apr provided a record early date for the province (M. & S. Mutzl).

A Black-necked Stilt, discovered at Baie-du-Febvre 17–19 May, provided a first and long-awaited record for the region (Yves Dugré, Jules Brunelle et al, ph.). More expected, an American Avocet made a stop at Saint-Antoine-de-Tilly 28 Apr (Jean-Paul Doyon, ph). Always rare away from Les Îles de la Madeleine, a Piping Plover was found at Gallix (North Shore) 21 May (Bruno Duchesne). Normally rare in spring, two dozen Whimbrels were reported in eight different localities during the period 20–26 May (m.ob.). A Ruff was observed intermittently at Yamaska 2–13 May (Paul Messier, André Lanouette). Rare in spring, single Stilt Sandpipers were seen at Pointe-au-Père (Rimouski) 20 May (Lucille Saint-Laurent), Baie-du-Febvre 22 May (Sheila MacLean et al), and Bécancour 25 May (Thierry Grandmont et al). A Long-billed Dowitcher was a good find at Baie-du-Febvre 26 May (Émile Brisson-Curadeau et al). Wilson’s Phalaropes were reported in 10 different localities in May, giving some hope for the re-establishment of the species.

Always rare in southern Québec, single Long-tailed Jaegers were located at Sainte-Pétronille 25 May (Gérard Cyr) and at Sainte-Anne-de-Sorel 30 May (Jean Lemoyne). Unexpected so late in spring was the discovery of an adult Ivory Gull by a very lucky observer at Baie Saint-Ludger 19 Apr (Emmanuel Hains).

A Burrowing Owl seen and photographed at La Motte (Abitibi) 11 May represented a fourth record for the province and the first since 1977 (Johanne Gagné). Following its absence last winter, a Great Gray Owl appeared unexpectedly at Châteauguay 20–30 Mar (A. Lajeunesse, m.ob.). A record high number of 83 Snowy Owls was tallied 7 Apr between Saint-Cuthbert and Maskinongé, including an astounding 55 individuals at Saint-Barthélémy alone (S. Proulx).

Rare in eastern Québec, single Red-bellied Woodpeckers were at Rimouski 24 May (Luce Pelletier) and at Grande-Rivière 27 May (Anne Saint-Jean). A Say’s Phoebe was briefly seen at Boucherville 7 May (Daniel Daigneault, Georges Vine). Two Fish Crows were recorded with the use of a cell phone at Sherbrooke 21 Apr (Antoine Turcotte-van de Rydt et al) and seen again 22 Apr (Olivier Barden), representing the first fully documented record in the province.

A Parkesia Warbler was reported at the Montréal Botanical Gardens 14 Apr (Antoine Gagnon), but it took two days before it was formally confirmed as a Louisiana Waterthrush from photos. Dozens of happy birders then saw the bird daily until 30 Apr; single males were also singing on territory at Glen Sutton 6 May (Jean-Pierre Santerre), and at Bromont 15 May (J-P. Santerre). A well-described male Lawrence’s Warbler (hybrid) made a brief appearance at Summit Park (Montréal) 18 May (Lyne Picard, L. Falardeau). A singing male Prothonotary Warbler was beautifully photographed by many at Angrignon Park (Montréal) 17 May (Jean-Marc Lacoste, Sylvain Messier, Christina McCallum, et al). A male Hooded Warbler resided at the McGill Bird Observatory (Sainte-Anne-de-Bellevue) 7–16 May where it was banded (Simon Duval et al) while a female stopped at Cap Tourmente 20 May (Gaétan Lord et al). Mostly a fall vagrant, three Yellow-throated Warblers were found in late May: one at Tadoussac 27 May (Ian Davies), one at Sainte-Angèle-de-Laval 30 May (Estelle Nadeau), and one at Rivière-Madeleine 31 May (Georgette Blanchette, ph.). A Prairie Warbler was seen again this year at Stanstead 13 May (Marc Théberge). A Yellow-breasted Chat was observed during a massive diurnal flight at Tadoussac 27 May, providing a first in spring for the North Shore (Laetitia Desbordes).

A hybrid Field Sparrow X Clay-colored Sparrow was photographed 18 May at Godmanchester at the same place where one had been reported last year (Frédéric Hareau, Denis Tétreault). A Lark Sparrow at Maskinongé 18 May (Sylvie Brouillette, Gilles Charbonneau) provided one of very few provincial records west of Québec city. A Grasshopper Sparrow feeding on the dike of Réservoir Choinière in Yamaska NP 8-9 May caused a surprise (Monique Berlinguette, Monique Maheu); another one was photographed at Batiscan 28 May (J. Leclerc); a few birds were also on territory in May in Pontiac County, the only region in Québec where the species is still nesting (m. obs.). An ad Harris’s Sparrow was well observed at feeders in D’Alembert (Abitibi) 18-21 May (Louis Imbeau, ph).

The six Summer Tanagers reported were well above average: an imm male at Cap Tourmente 9 May (Daniel Campeau et al, ph.), a female at Saint-Ignace-de-Loyola 9 May (Suzanne Casavant, ph.), an adult male at Saint-Félicien 18–22 May (Jean Tremblay et al, ph.), a female at Saint-Antoine-de-Tilly 19–20 May (Jocelyne Fiset, ph., G. Isabelle), an imm male at Saint-Félicien 25 May (Dominique Lavoie et al, ph.), and finally a female at Trois-Rivières 30 May (C. Mailloux, ph.). A Scarlet Tanager at Dollard-des-Ormeaux 28 April provided an early provincial record (Alain Lavallée). An adult male Western Tanager brightened Saint-Honoré (Saguenay) 31 May–3 June (Roxane Imbeault, m.ob., ph.). It was the best spring for Blue Grosbeak since 1991, with an unequalled total of seven birds, all adult or imm males, mostly in the eastern part of the province, including one at Gaspé 30 Apr–2 May (Nadia English), one at Lebel-sur-Quévillon (Abitibi) 5 May (Hélène Pelletier), one at Brigham (Montérégie) 8 May (Charles-Alexandre Mercure), one at Rivière Saint-Jean 7–13 May (Réal Poulin et al), one at Sept-Îles 12 May (Christian Briand, Hélène Olivier), one at Cap-aux-Os 12 May (Lili Rose), and the last one at Rimouski-Est 31 May (Rita and Lucille Saint-Laurent).

With six different male Painted Buntings reported and confirmed by photos, it was the most prolific season in the province to date, starting with one in Anglier (Témiscamingue) 24–27 Apr, a record early date (Jacques L’Heureux, ph.); one at Notre-Dame-des-bois (Estrie) 25 Apr (Diane Deilgat, ph), one at Padoue (Gaspésie) 7–10 May (fide Monique Lévesque, ph.), one at Saint-Henri-de-Taillon (Lac Saint-Jean) 11 May (Michel Bellemare, ph.), one at Kirkland (a first for Montréal) 17 May (Linda Beaudoin, ph.), and the last one at Notre-Dame-des-Neiges Est (Lower St.Laurent) 24 May (Jacinthe Rioux, ph.). Single Yellow-headed Blackbirds were reported at Québec City 14–15 Apr (Huguo Tremblay, m.ob.), Salaberry-de-Valleyfield 28 Apr (Denise Simon), Val d’Or 6 May (Rolande Langlois, fide Claudia Siano), and D’Alembert 27 May (Louis Imbeau et al). A male Orchard Oriole at Saint-Armand 23 Apr provided a record early date for the province (Jean-Guy Papineau); single males were also seen at Saint-Mathieu-de-Beloeil 10 May (J. Doyle), Châteauguay 20 May (Alex Lavoie), Cowansville 21 May (Lise Paquet), Drummondville 25 May (Thierry Grandmont et al) and at Pike River 31 May+ (Michel Asselin). 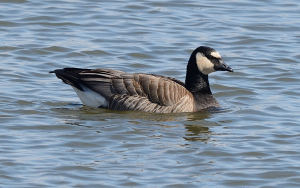 This rare Barnacle Goose x Canada Goose hybrid, spotted at Saint-Jean-sur-Richelieu, Québec, 29 Mar 2019 was only the second one ever reported in the province. Photo © Jocelyn Dubé. 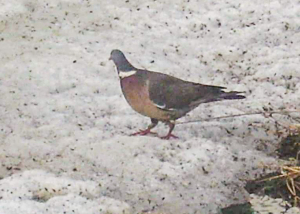 This Common Woodpigeon at La Romaine on Québec’s Lower North Shore 5–13 May 2019 (here 9 May) made history, providing a first record not only for North America but also for the New World. Photo © Denis Desjardins. 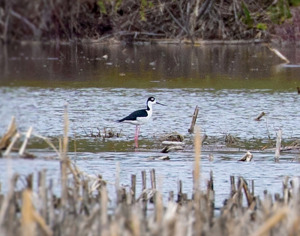 This Black-necked Stilt, discovered at Baie-du-Febvre 17–19 May (here 17 May) provided a first and long-awaited record for Québec. Photo © Suzanne Labbé. 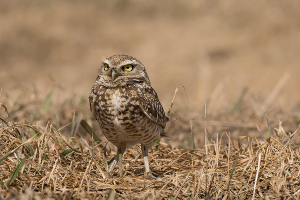 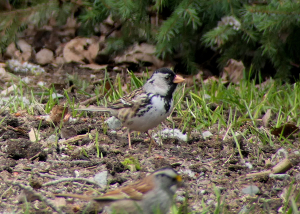 The Harris’s Sparrow, seen here at D’Alembert 18–21 May 2019, is now an almost annual vagrant in Québec. Photo © Sylvie Gagnon 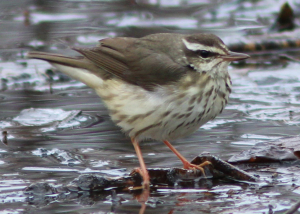 This early Louisiana Waterthrush was seen by many at the Montréal Botanical Gardens in Québec 14–30 April (here 16 April). This species is a very local breeder in the province. Photo © Yves Gauthier. 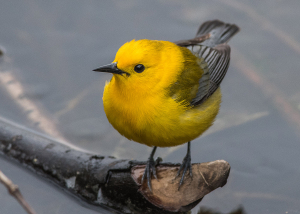 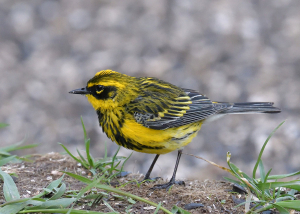 This spectacular Yellow-rumped Warbler with an excess of yellow pigments caused some identification problems at Laterrière, Québec, 23 May 2019. Photo © Yves Darveau. 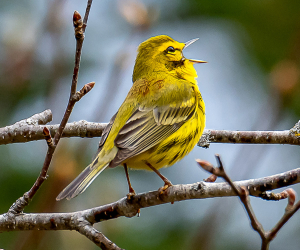 A male Prairie Warbler was present for the second consecutive year at Stanstead, Québec, 13 May 2019. Photo © Marc Théberge. 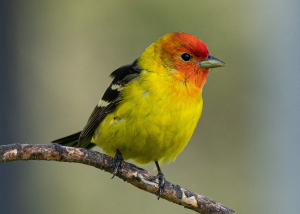 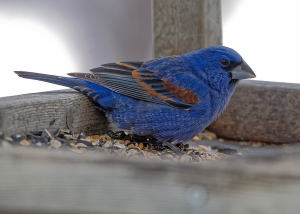 This Blue Grosbeak, seen at Rivière Saint-Jean, Québec, 7–13 May 2019 (here 9 May), was one of an incredible seven reported this spring in the province. Photo © Bruno Duchesne. 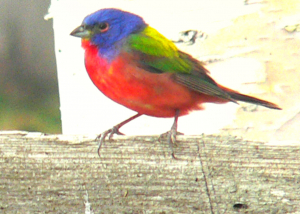 This Painted Bunting, spotted at Saint-Henri-de-Taillon 11 May 2019, was one of six males recorded this spring in Québec. Photo © Michel Bellemare