Overall, spring 2018 was colder and drier than normal, notwithstanding that March was a mild month, averaging 3o  C to 4o C above normal and accompanied by light precipitation. April was 3o C below average slowing down the melting of the snow. May continued below average with little precipitation. As everyone knows now, a monumental fallout of songbirds, mainly warblers, took place at the Tadoussac Bird Observatory on 28 May. An estimated 721,000 warblers was recorded by a team of birders led by Ian Davies. Although spring fallouts are not unusual on the North Shore of the St. Lawrence, special weather conditions in this case led to the most gigantic fallout ever recorded. The phenomenom received wide coverage in the media. More details on the composition of the birds can be viewed at https://ebird.org/view/checklist/S46116491

A Pink-footed Goose in the Chambly basin 2–12 Mar established a record early arrival date for the region (P. Bergeron, m. ob.). Possibly the same individual or others were seen at different places in the Upper Richelieu Valley through 9 Apr (m. ob.); singles were also observed at Sainte-Catherine 11 Apr (S. Labbé, P. Bannon, m. ob.), Cabano 30 Apr–7 May (R. Deschênes, M. Beaulieu), and Sept-Îles 10 May (B. Duchesne, C. Couture). Two Barnacle Geese at Ile Sainte-Marie (Carignan) 1 Mar were also record early (Y. Gauthier). Presumably the same two birds were seen at Saint-Basile-le-Grand 29 Mar (S. Denault). Several observers reported the same or others in the vicinity, including singles at Chambly (D. Labranche) and Baie de Lavallière (P. Messier) on 27 Mar. A Barnacle Goose was also spotted at Brigham 9 Apr (C. Ferri, B. Hamel). Single Mute Swans were at Rapide-Danseur (Abitibi-Ouest) 2–29 Apr (R. Plante, J. Gagnon) and at Saint-Césaire 28 May+ (MF. Lemay et al). In addition to the now regular sightings in the Abitibi region, a Trumpeter Swan was back for the second year at Saint-Fulgence 23 Apr onwards (G. Savard et al), while a bird at Saint-Armand was present intermittently 16 Apr onwards (JG. Papineau, m.ob.). Single Tundra Swans stopped at Leclercville 22 Apr–6 May (S. Lemieux, S. Blackburn, m.ob.) and at Saint-Étienne-de-Beauharnois 8 May (C. Saint-Pierre), while two were found at Val d’Or 21 May (R. Ladurantaye).

Three Whimbrels at Saint-Basile-le-Grand (S. Denault) and one at Carillon 20 May (F.X. Grandmont) provided rare spring sightings near Montreal. Several Ruffs were reported along the Upper Richelieu Valley and around lake Saint-Pierre with a maximum of three seen simultaneously at Baie-du-Febvre 23 May (R. Guillet, A. Lanouette). Always rare in spring, a Stilt Sandpiper was a welcome sight at Baie-du-Febvre 22–26 May (N. Roy et al). A Thick-billed Murre at Rivière-Ouelle 19 May provided a fourth record in two years for this site (C. Auchu, C. Girard). Single Little Gulls were discovered at Chambly 28 Apr–3 May (P. Bannon, m.ob.) and at Notre-Dame-des-Pins 29 Apr (A. Beauchamp et al), two at Saint-Barthélemy 12 May (Y. Gauthier, S. Morand), one at Saint-Donat-de-Montcalm 18 May (MC. Brault, JF. Piché), and three at Ile Verte 20 May (Y. Roy). An adult Mew Gull at Rivière-du-Loup 7 Apr was not only a great find, but also provided a record early date for the region (JF. Giroux, S. Dionne et al, ph.).

An adult Neotropic Cormorant was carefully studied and photographed at Gatineau 27 Apr, furnishing a first record for the region (G. Rand et al). An American White Pelican seen at Lavaltrie 25 Apr–3 May (N. Saint-Georges, m. ob.), at Laval 4 May (M. Boisvert) and at Saint-Lazare 8 May (M. Juteau) possibly involved the same individual. In northwestern Québec, seven American White Pelicans were reported at Duhamel-Ouest 16 May (J. Fréchette et al) and one at Roquemaure 28 May (R. Deschênes). Now seen annually in the region, three Snowy Egrets were reported in May, while an adult Little Blue Heron stopped at Pabos Mills 22–25 May (J.M. Smith, m.ob.). A Tricolored Heron was spotted at Bécancour 14–15 May (J. Villemure, m.ob.). A single Glossy Ibis visited Dundee 19–28 May (D. Ouellet et al), Napierville 20 May (S. Denault) and Cacouna 22–23 May (S. Dionne).

The award for the bird of the year goes without a doubt to the Eurasian Skylark observed and photographed by many 6–7 May at Saint-Damien (N. Rondeau, m.ob, ph) providing not only a provincial first but a first record in the East. This bird presumably belonged to one of the European subspecies (fide P. Pyle) of which numerous sightings are known in Iceland and the Azores, and one in Bermuda. This species had been introduced in Montreal in 1876, but all the birds were eventually killed by hunters. A Northern Rough-winged Swallow at Les Escoumins 24 Apr was the first documented record for the North Shore (JG. Beaulieu, ph.). A male Mountain Bluebird, amazingly the fourth record since last Nov, made a short visit at Neuchâtel (Québec City) 31 Mar (G. Cyr, L. Roy, A. Déry, ph.). Single Townsend’s Solitaires were found in Mont-Tremblant National Park 21–24 Mar (L. Laberge, ph.) and Jonquière 29 Apr (S. Boivin et al). Two Varied Thrushe,s or perhaps the same bird, were observed at Forestville 5–17 Apr (B. Gagnon, m.ob.) and at La Malbaie 22 Apr (S. Lapointe).

A presumed hybrid Lapland Longspur x Snow Bunting was photographed at Baie-du-Febvre 27 Mar (Y. Dugré, fide S. Denault and M. Gosselin), providing only the second documented record in the world of this rare combination. A Worm-eating Warbler banded at Sainte-Anne-de-Bellevue 13 May was noteworthy (C. Rosa-Teijeiro, J. White). Two males Louisiana Waterthrushes were singing on territory one kilometer apart along the Beaver Meadow brook at Bromont 7 May+ (J.P. Santerre, m.ob.), while another was singing along the Dufour brook at Glen Sutton 8 May+ (J.P. Santerre). A vocal male Hooded Warbler at Saint-Hyacinthe 21–22 May (C. Côté, J. Bardier et al) was beautifully photographed. Astounding was a Black-throated Blue Warbler heard and recorded on cell phone but not seen at Montreal 3 April, which represents a record early date by three weeks (N. Facciola, T. Grandmont). The only two Yellow-throated Warblers of the season were found the same day, 29 Apr, hundreds of km apart: one at Saint-Georges-de-Beauce (C. Boucher, ph.) and the other at Port-Cartier (MC. Haché, ph.). A Prairie Warbler was banded and seen by many at Rimouski 15 May (V. Giroux et al) while another one was spotted in flight at Tadoussac 28 May (I. Davies et al). A male Townsend’s Warbler at Cap Tourmente 5–7 May provided a third confirmed record only for the province and delighted hundreds of birders (D. Campeau, m.ob.).

A Lark Sparrow at Val d’Or 19–20 May furnished a rare spring record (C. Siano, R. Ladurantaye). An adult male Lark Bunting was seen briefly at Rimouski 31 May (G. Gendron). An ad male J.h. caniceps “Gray-headed Junco” was nicely photographed at Saint-Casimir 4 Apr and represents only a second confirmed record for the province (É. Sane). Single Summer Tanagers visited Saint-Boniface 9 May (A. Babin, M. Mercure), and Saint-Georges-de-Beauce 18–22 May (Y. Couture). A male Western Tanager brightened Baie-Trinité 19–25 May (D. Saint-Laurent, JP. Barry). An imm male Lazuli Bunting at LaTuque 16–17 May (H. Charland, ph.) represented a fourth record for the province. A Western Meadowlark at Les Escoumins 26 Apr (J.G. Beaulieu) and maybe the same individual at Ragueneau 29 Apr (D. Saint-Laurent) continued to add up to the numerous records of this species for the North Shore. An Eastern Meadowlark at Baie-Comeau 2 May was practically rarer than the previous for the same region. 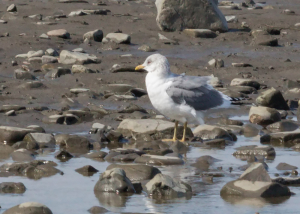 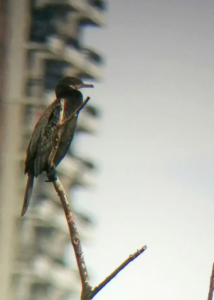 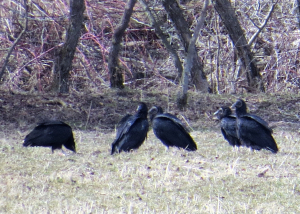 Several Black Vultures were seen in Apr 2018 in the Saint-Armand, Québec area, close to the border with Vermont, with a maximum of six birds 4–6 Apr (here 6 April). The largest number seen previously in the province was two. Photo © Bernard Cayer 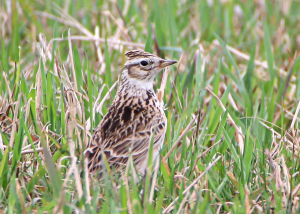 This Eurasian Skylark at Saint-Damien 6–7 May 2018 (here 6 May) provided not only a provincial first for Québec, but also a first record in the East. Photo © Nathalie Rondeau 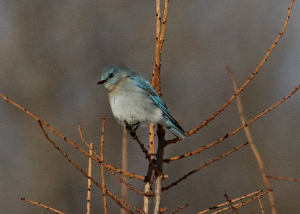 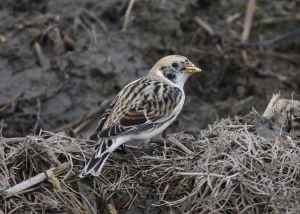 This presumed Lapland Longspur x Snow Bunting hybrid stopped at Baie-du-Febvre, Québec on 27 Mar 2018, providing only the second documented record in the world of this rare combination. Photo © Yves Dugré 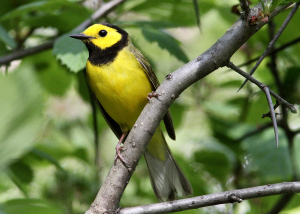 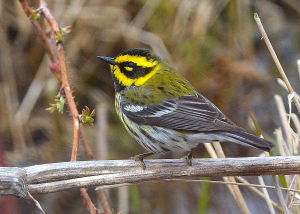 This male Townsend’s Warbler at Cap Tourmente, Québec 5–7 May 2018 (here 5 May) provided only a third confirmed record for the province. Photo © Daniel Campeau. 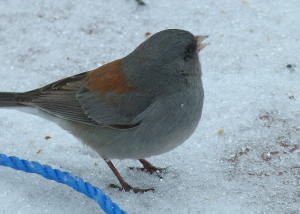 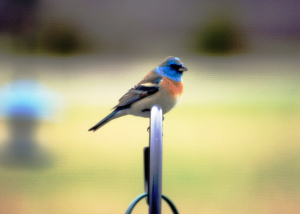 This immature male Lazuli Bunting at La Tuque, Québec, 16–17 May 2018 (here 17 May), represented a fourth record for the province. Photo © Hugo Charland