The major events of the fall season in the province of Québec were :

1) The advent of an incredible number of MEGA rarities, including two highly migratory species native to South America. The total of 18 MEGA rarities include the Tundra Bean-Goose, Common Shelduck, Steller’s Eider, Common Ringed Plover, Little Stint, Magnificent Frigatebird, Brown Booby, Little Egret, White Ibis, White-faced Ibis, Steller’s Sea-Eagle, Burrowing Owl, Small-billed Elaenia, Fish Crow, Redwing, Brambling, Lesson’s Seedeater, and Eurasian Tree Sparrow, all of these species recorded only ten times or less in the province. Difficult to find a common factor explaining this increase in the number of MEGA rarities, considering that some species were originating from South America, some from western North America, some from Eurasia, etc. It seems however that the number of skilled observers in the field, which has probably increased tenfold in recent years, may in parts explain this phenomenon.

More information on these and on other interesting birds seen this past fall will be following.

Please take note that some of the rare occurrences addressed in this report are still awaiting official acceptance by the Québec Bird Records Committee.

A Small-billed Elaenia, a flycatcher native to South America was misnetted and banded at Observatoire d’Oiseaux de Tadoussac, 26 Oct (Francis Bordeleau, Francois-Xavier Grandmont, Jessé Roy-Drainville et al., ph.). Identification was confirmed with the help of Alvaro Jaramillo in order to eliminate the very similar White-crested Elaenia. This provides the first record not only for the province of Québec but also for Canada. There are now four confirmed records in North America, of which three occurred in 2021. (see Davis, Amy. 2021. “Just Another Small-billed Elaenia”. North American Birds).

Three Summer Tanagers were reported during the season with one at Sept-Îles 28–30 Oct (Isabel Calderon), one at Roberval 9–30 Nov+ (Ginette Fortin) and one at Gaspé 21–29 Nov+ (Patrick Leblond, Monick Fournier). A Western Tanager was photographed at Cap d’Espoir 24 Sep (Albini Couture) and possibly the same bird was also observed at nearby Grande-Rivière 25 Sep (Anne St-Jean). A male Northern Cardinal feeding young at Val d’Espoir 22 Aug (Guy Roussy) and another male feeding young at Gaspé 2 Sep (Sonia Kenny) confirmed breeding at the tip of the Gaspé peninsula for the first time. A female-type Blue Grosbeak at Newport (Gaspésie) 28 Sep–3 Oct was a good find (Jean-Marc Smith, m. obs.).

Another remarkable surprise for the year, a male Lesson’s Seedeater, a bird native of South America appeared at Pointe-aux-Outardes on the North Shore of the St. Lawrence River 24 Oct–3 Nov (Emmanuel Hains, Caroline Gagnon et al.). Different hypotheses were suggested to explain the origin of this bird, including a misoriented migrant engaged in reverse migration, but an escaped cage-bird was not definitively ruled out. The Quebec records committee recently ruled on its acceptance and decided to list it as a provisional species under the new eBird definitions rather than a genuine vagrant (Pierre Bannon, pers. comm.). However, a literature review revealed that there are at least three past Lined/Lesson’s Seedeater reports at suspected vagrant traps in the United States and Canada: one at Isle of Shoals, NH 8 Aug 1935, one in Ramea, NL 30 Jul 1990 and one at South Padre Island, TX 14 Sep 2014.

A Eurasian Tree Sparrow was a more expected first record for the province, when an adult appeared in a flock of House Sparrows 17–30 Nov+ at Saint-Barthélemy (Marie Morissette, m. obs.), most probably originating from the population introduced at Saint-Louis, MO. 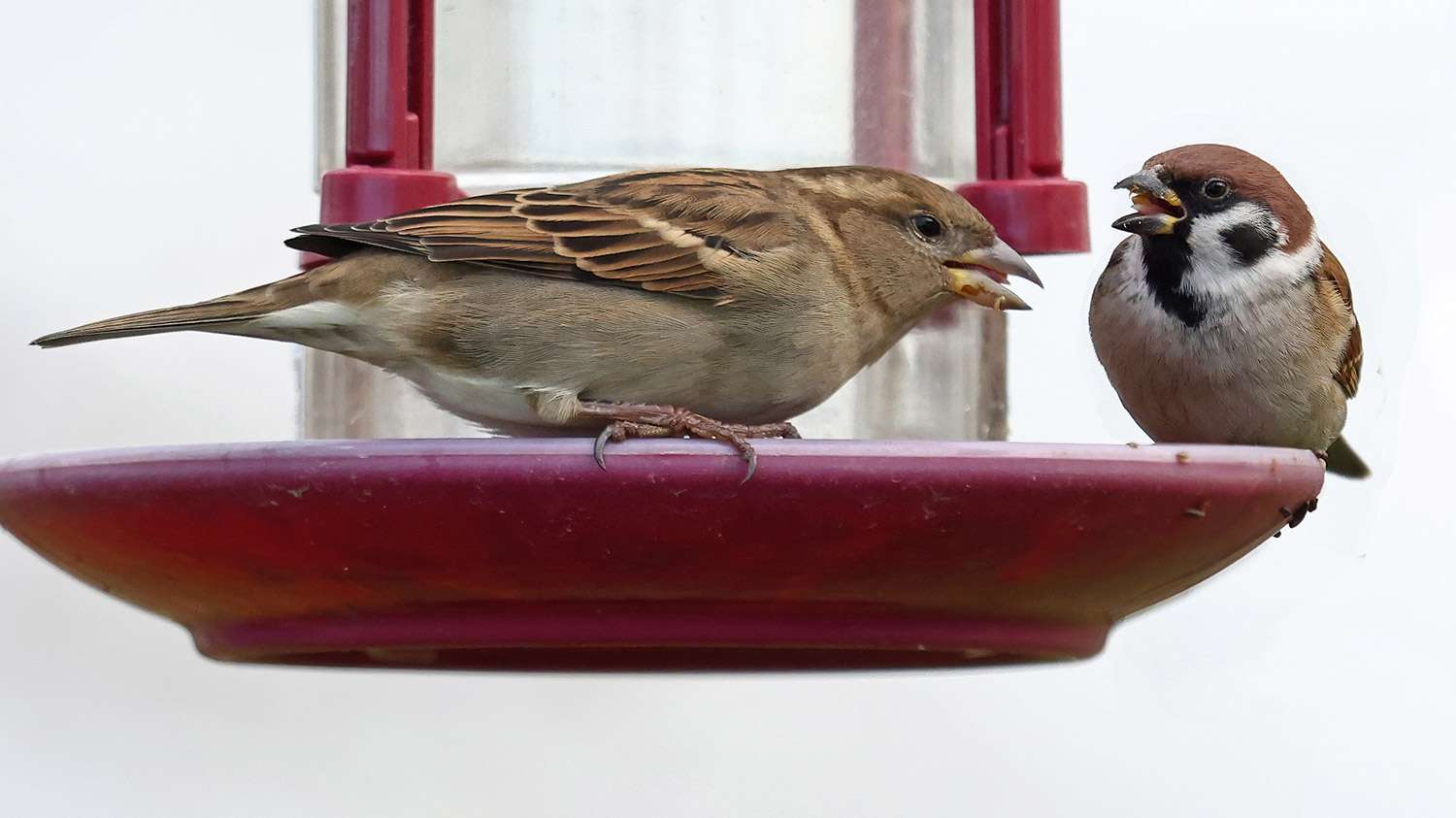 This Eurasian Tree Sparrow, the first found in the province of Québec, was present at Saint-Barthélemy, a rural locality situated northeast of Montréal, 17–30 Nov+ 2021 (here 22 Nov ). It was considered to be a natural vagrant originating from the introduced population now established at St-Louis, MO. On the left, a female House Sparrow for comparaison. Photo ©Daniel Jauvin.

This male Magnificent Frigatebird, the fourth for the province of Québec, was photographed 2 Oct 2021 while flying over the shore of the St. Lawrence river at Lévis. Photo © Pierre Larouche. 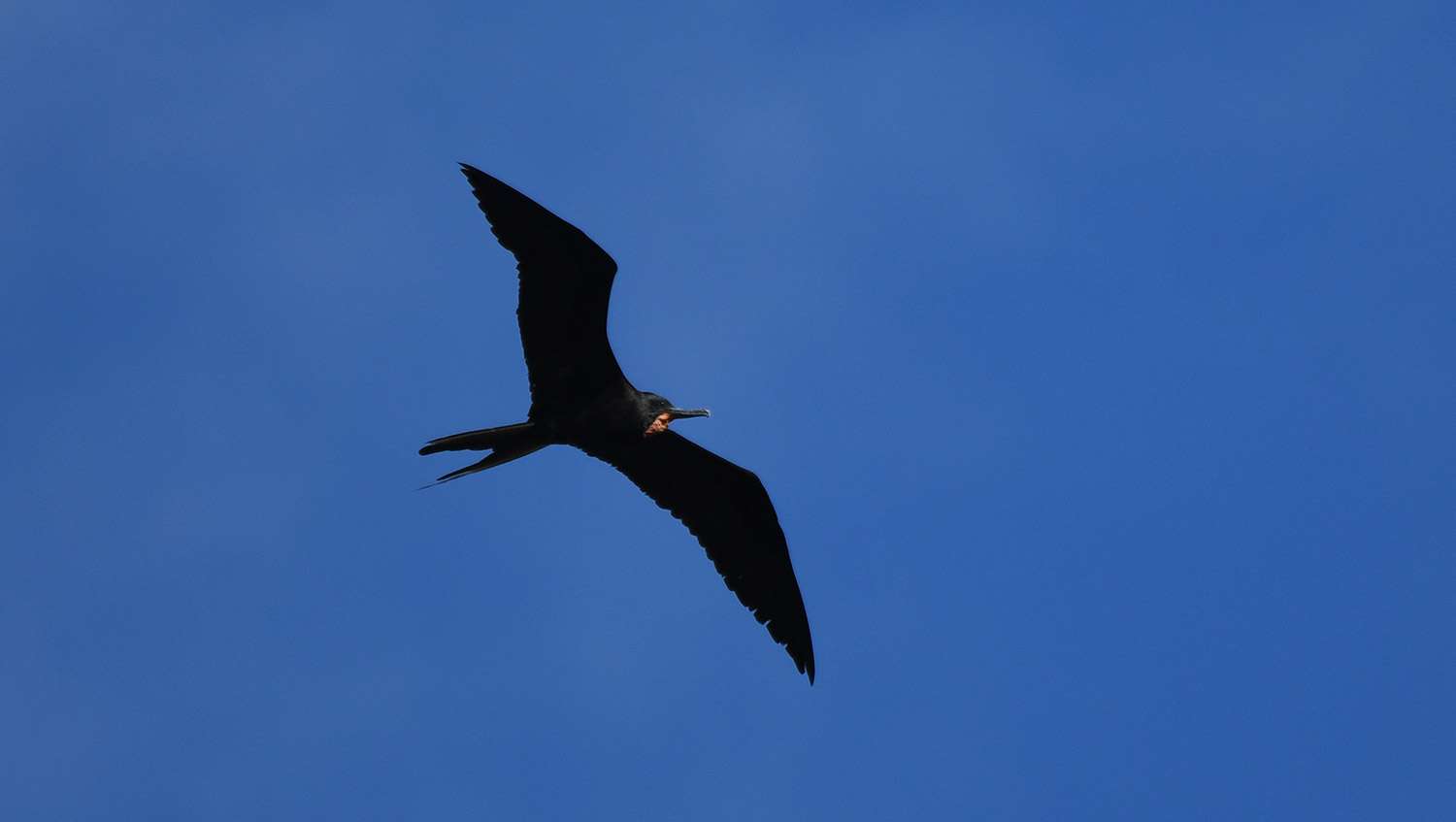 This male Magnificent Frigatebird, the fourth for the province of Québec, was photographed 2 Oct 2021 while flying over the shore of the St. Lawrence river at Lévis. Photo © Pierre Larouche.

Although it was always observed at a distance, this small calidris (the second from the right) was decisively identified as a Little Stint. The bird was reported intermittently at Bridgeville, near Gaspé, 11—26 Sep 2021 (here photographed on 12 Sep), providing a first record for the province of Québec. Photo © Martin Bourbeau. 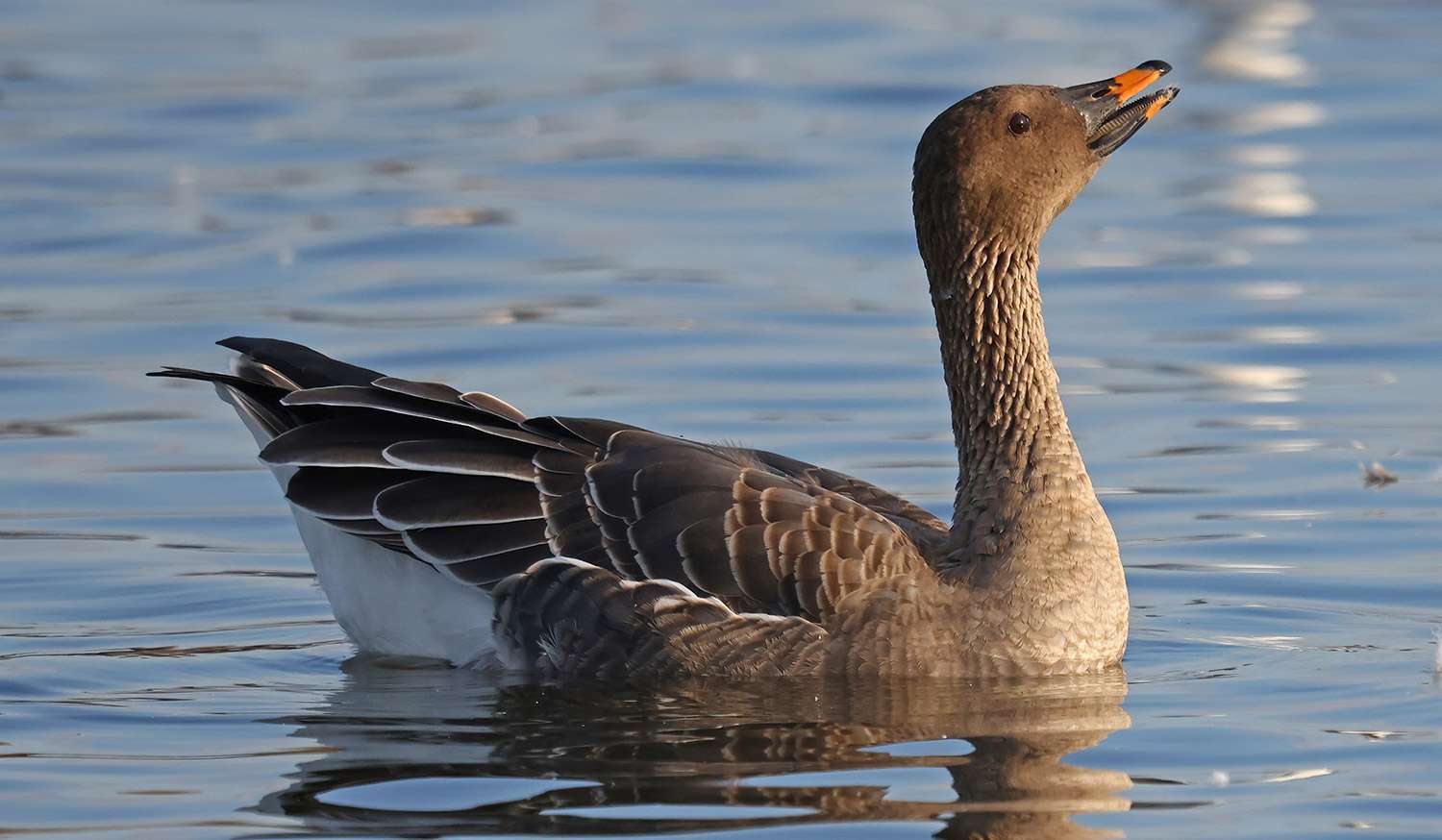 This Tundra Bean-Goose, the third record for the province, stopped in three different localities of southern Québec 4–14 Nov 2021 (here photographed at Victoriaville 8 Nov). Based on the distribution of the orange color on the bill, it is probable that it was the same individual that visited SK in winter 2019, ON and QC in fall 2020, PA in winter 2020–21, and NY in spring 2021. Photo © Daniel Jauvin. 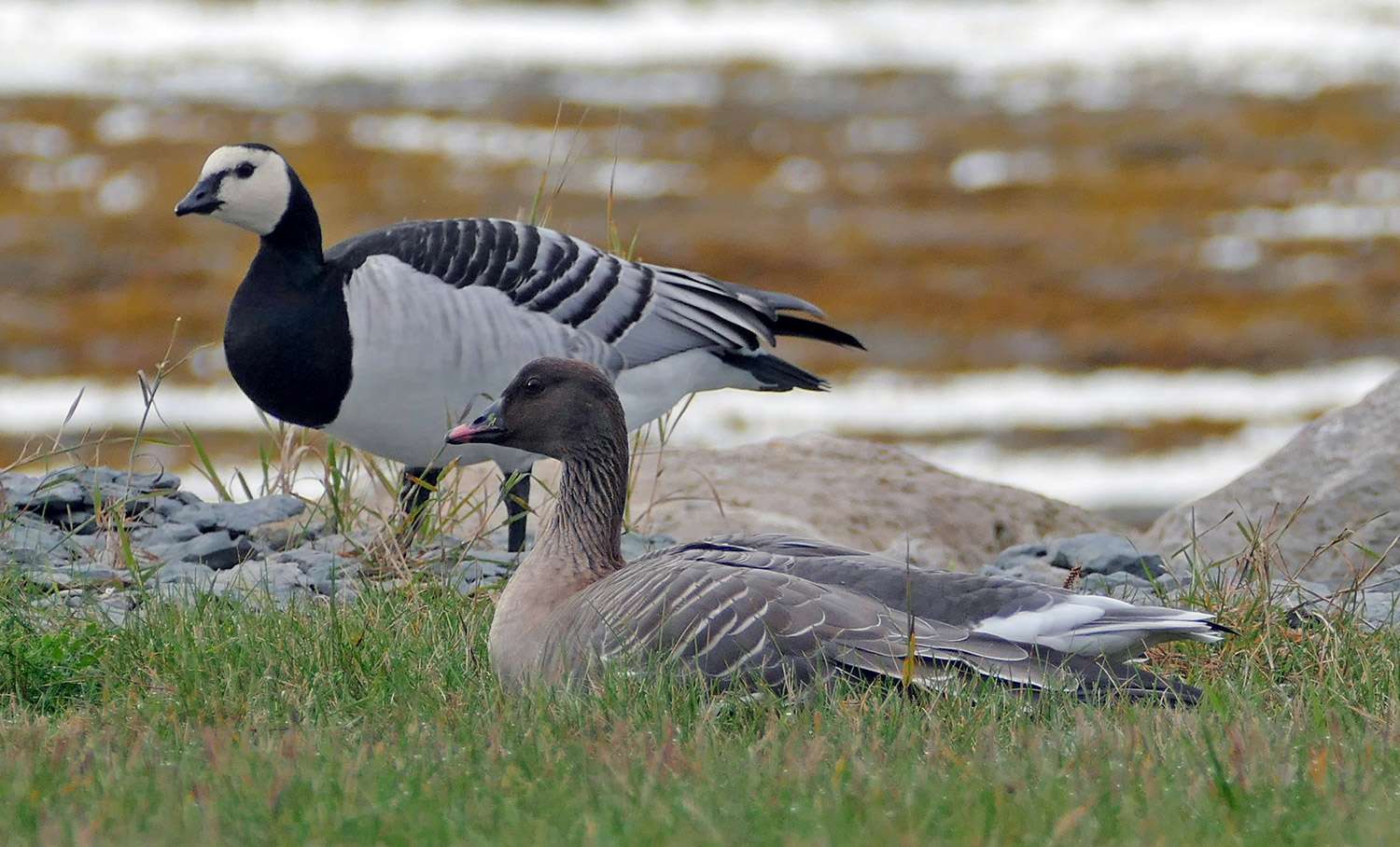 These two species, the Barnacle Goose and the Pink-footed Goose, both common in northern Europe but rare in North America, made a unique encounter at Port Menier, Anticosti Is., QC on 8 Oct 2021. Photo © Gaétan Laprise. 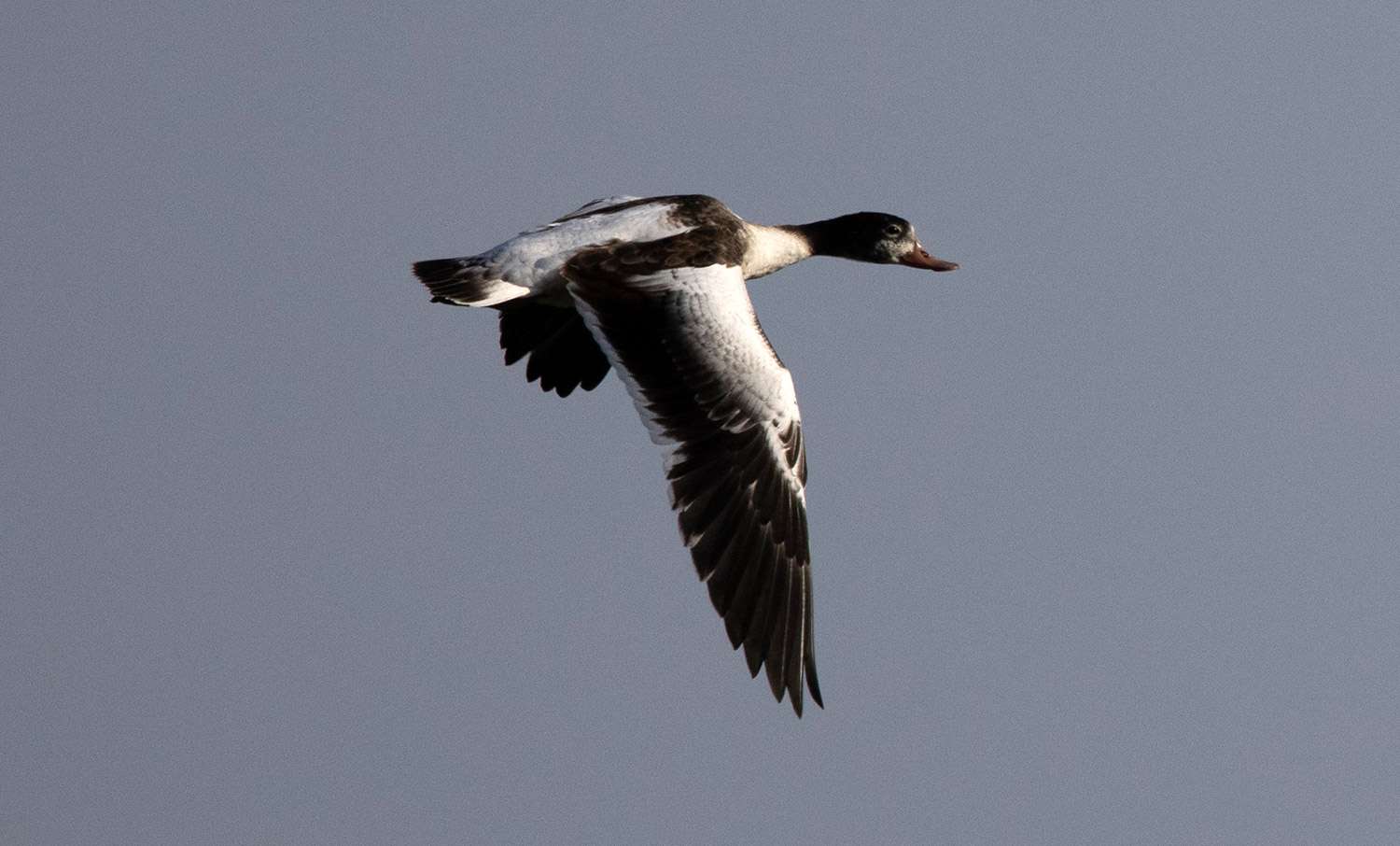 The Common Shelduck has recently received more attention as a genuine vagrant in eastern North America. This juvenile was seen by many at Sorel, QC 21 Aug–28 Sep 2021, and photographed here on 27 Aug. Photo © Suzanne Labbé. 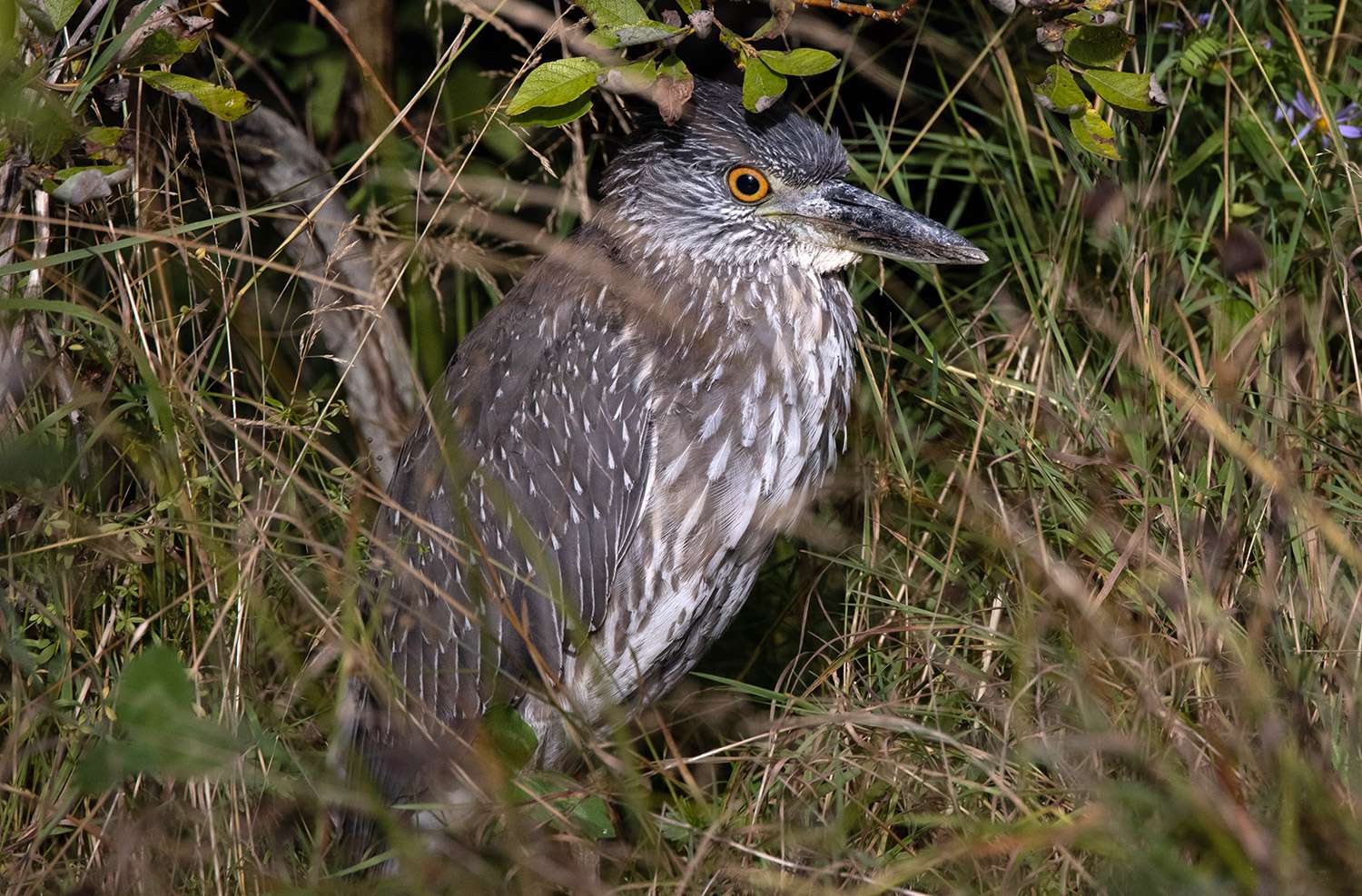 This juvenile Yellow-crowned Night-Heron, the 17th recorded in the province of Québec, stopped at l’Anse-à-Valleau, near Gaspé 10–12 Nov 2021. It was photographed here on 11 Sep. Photo © Suzanne Labbé. 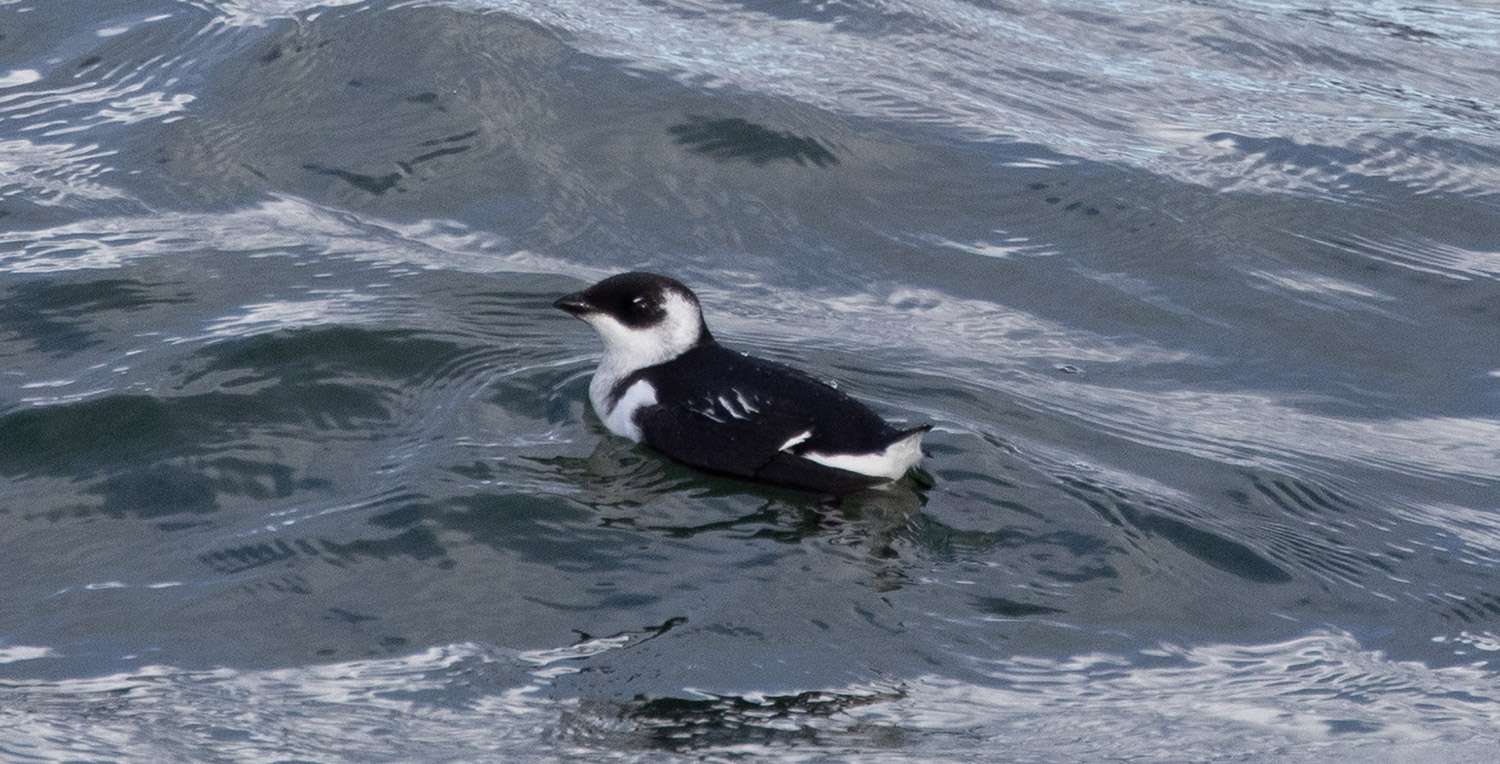 Dovekies made a good show in the St. Lawrence estuary in fall 2021. This individual was photographed at Pointe au Père, near Rimouski 4 Nov 2021. Photo © Suzanne Labbé.

This spectacular Scissor-tailed Flycatcher, the 33rd recorded in the province of Québec was photographed by many at the Montréal Technopark 6–24 Nov 2021 (here on 7 Nov). Photo © Daniel Jauvin. 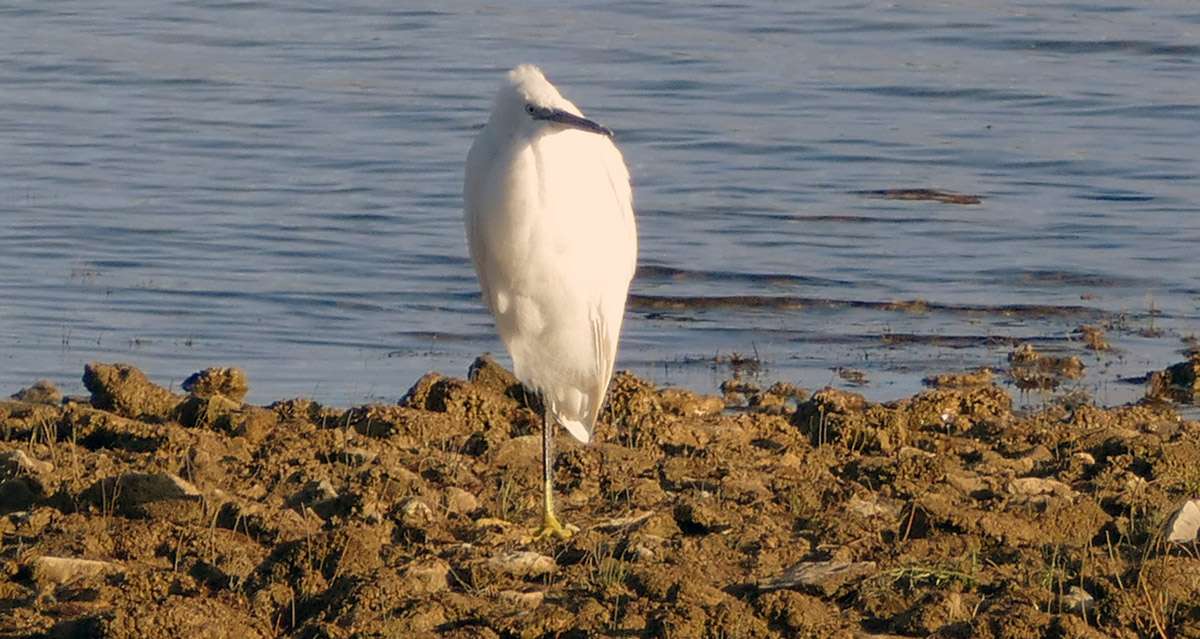 This Little Egret, the fifth recorded in the province of Québec, made a one-day stop at Port Menier, Anticosti Is. 27 Oct 2021. Photo © Gaétan Laprise. 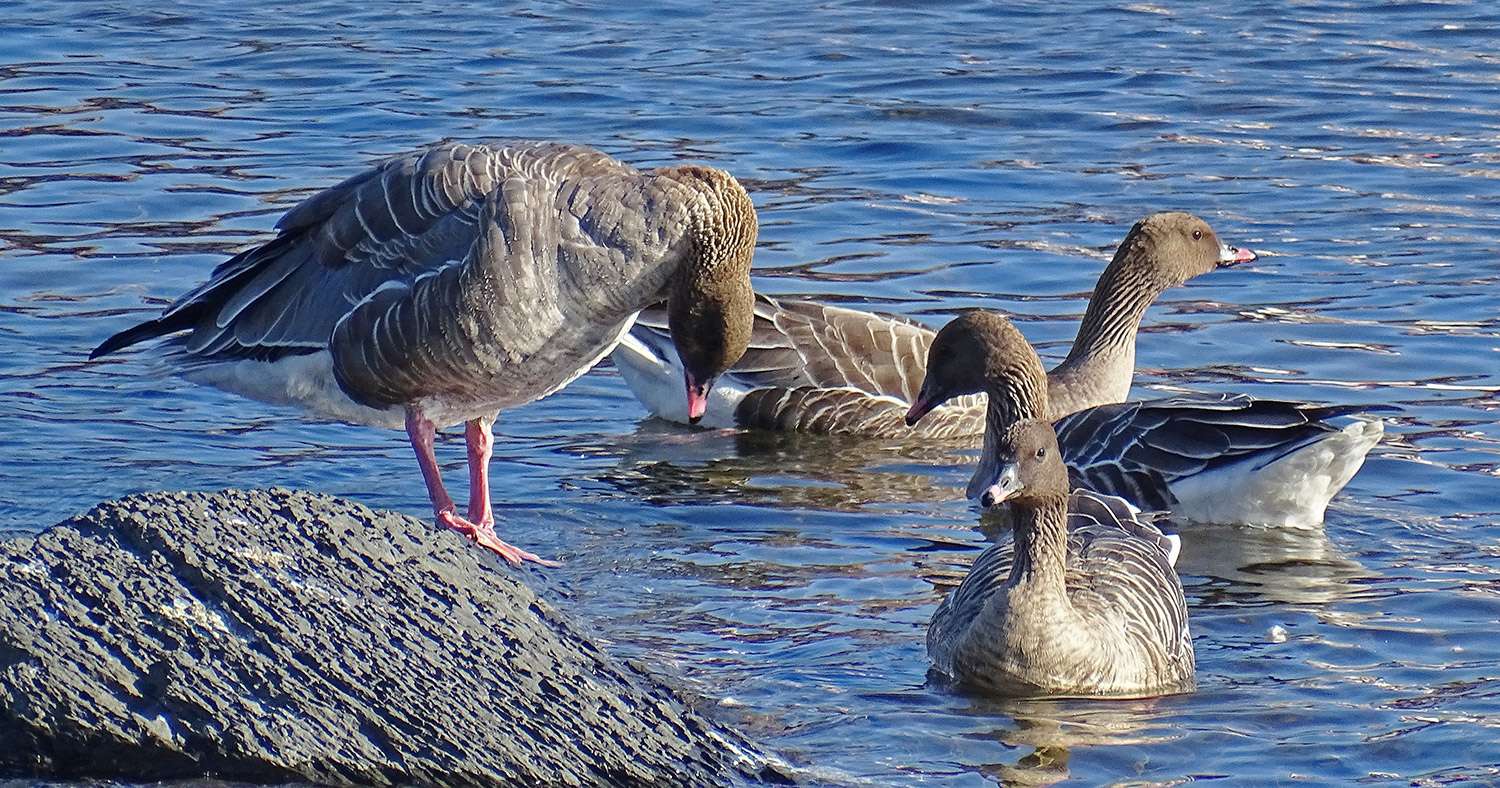 The 27 Pink-footed Geese recorded in the province of Québec in fall 2021 were composed of several small groups, possibly familial groups, as shown by these four birds photographed at Matane 3 Nov 2021. Photo © Monique Ouellet. 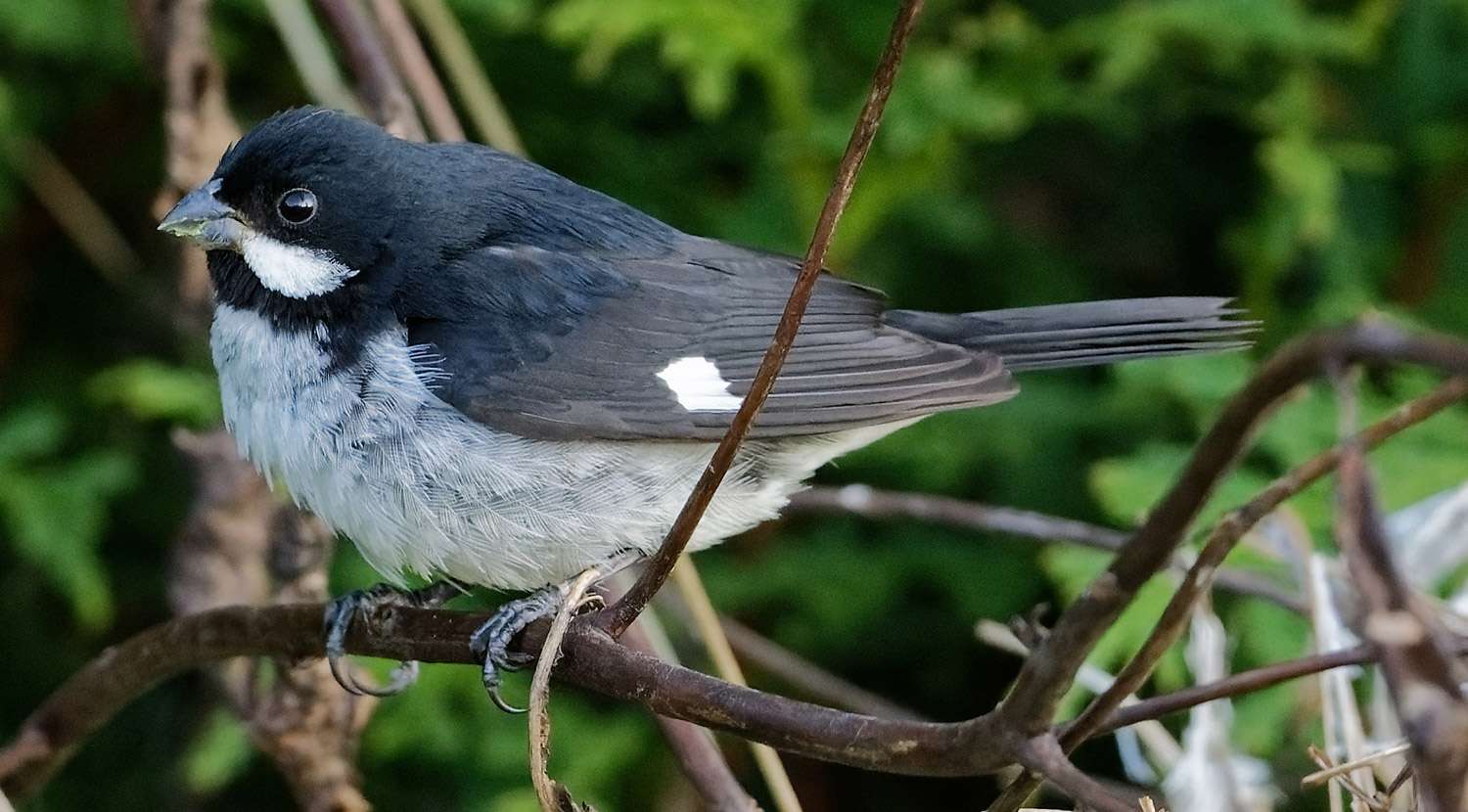 This male Lesson’s Seedeater, a native of South America paused at Pointe-aux-Outardes on the North Shore of the St. Lawrence River, QC 24 Oct–3 Nov 2021 (here 26 Oct). While potentially a first record for the ABA area, it was voted against acceptance by the Quebec records committee, but given a provisional status under the new eBird definitions. Photo © Steeve Baker. 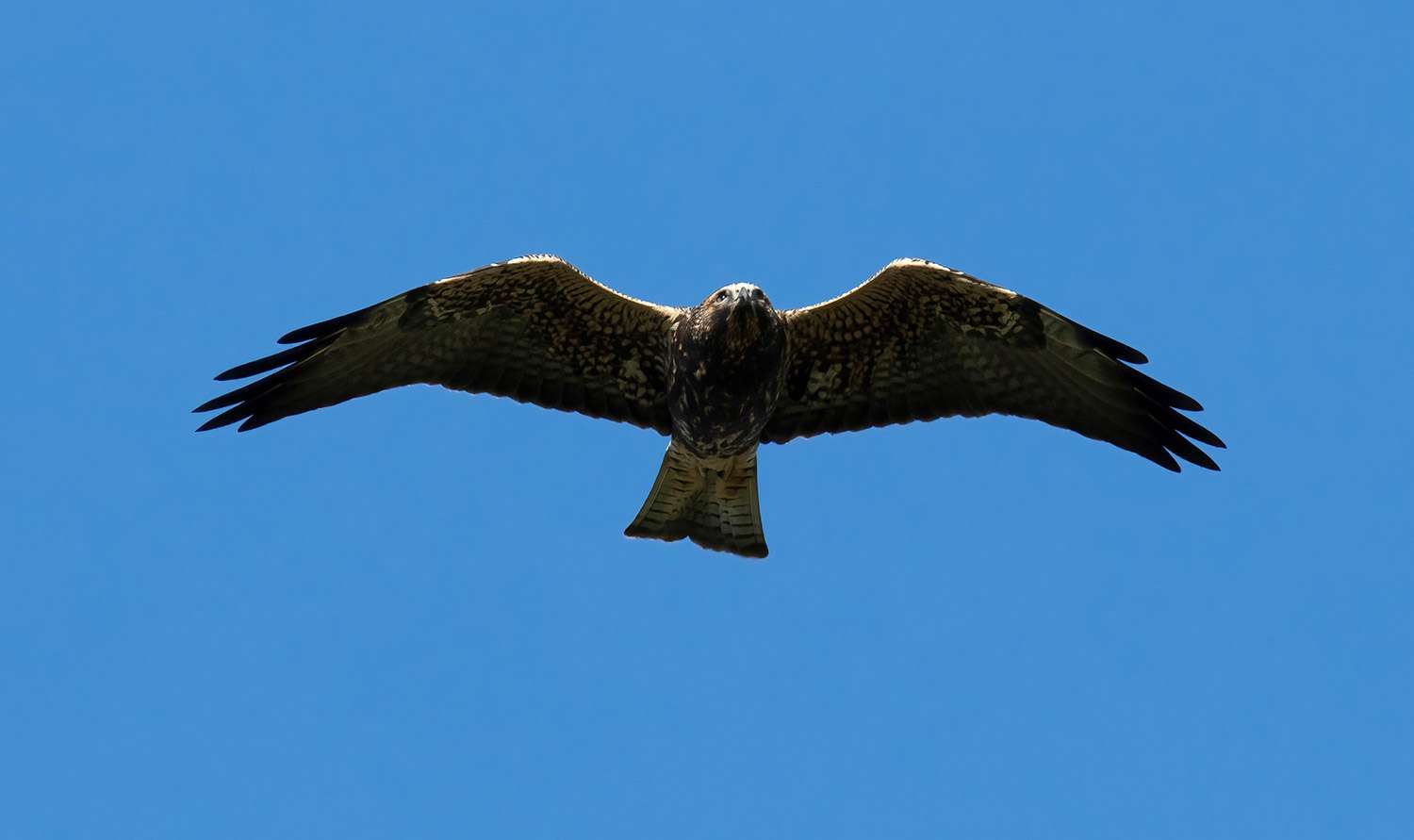 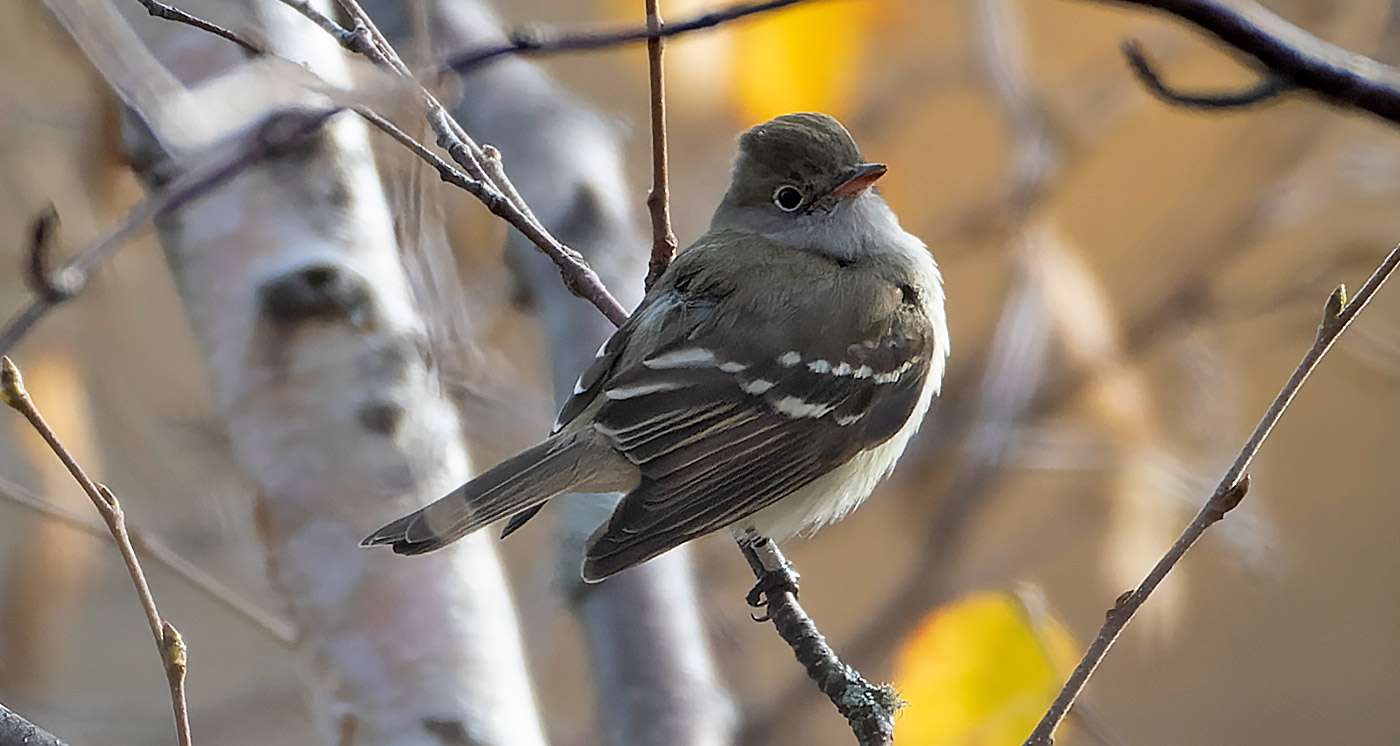 This Small-billed Elaenia was misnetted, banded and photographed at Tadoussac 26 Oct 2021. This provided the first record not only for the province of Québec but also for Canada. There are now four confirmed records in North America, of which three occurred in 2021. Photo © David Turgeon.

Three adult (here two) White-faced Ibis in nonbreeding plumage were present at Saint-Étienne-de-Beauharnois 29 Oct–3 Nov 2021. This was the 6th record in the province of Québec and the first record involving more than one bird. Photo © Éric Simard.