The July heat lasted into August, but the end of the month was marked by a clear break in this trend. September exhibited normal temperatures and precipitation, while October was cool and wet. Finally, November was very mild and dry, especially during the first half of the month. Highlights of the season involved a high number of western vagrants and a spectacular shorebirds migration in Missisquoi Bay. Vagrants of greatest interest included Tundra Bean-Goose, Slaty-backed Gull, Magnificent Frigatebird, Ash-throated Flycatcher, Vermilion Flycatcher and Golden-crowned Sparrow

Single White-winged Doves at Neuville 22 Aug (G. Poisson), and at Tadoussac 20 Oct–3 Nov (L. Desbordes, m. ob.), brought the total for the year to five records. The influx of Yellow-billed Cuckoos noted last summer in southern Québec continued into the fall, but with a shift towards the northeast as far as the Gaspé Peninsula. More precisely, about 10 birds were detected in southern Québec in late Aug–early Sep, but as many as 30 in eastern Québec in late Sep–early Oct, including a high count of five in Forillon NP 3 Oct (D. Jalbert, A. Gagnon).

About 12 Black Vultures were reported in the province, including a pair hanging around the Saint-Armand area for the last two weeks of Aug (m. ob.), as well as single late birds at Dundee 20 Nov (D. Harvey, S. Harvey, ph.), and at LaPêche 25–30 Nov (C. Detellier, ph.). Also, possibly up to six birds hung around the tip of the Gaspé Peninsula throughout the period. A juvenile dark-morph Swainson’s Hawk was nicely photographed at Saint-Maurice-de-l’Échourie (Gaspésie) 22 Sep (V. Cotton), and most probably the same bird in Forillon NP 25 Sep (S. Robert, P. Berthe). Furthermore, a very high-flying hawk photographed 20 Oct at Sainte-Catherine (L. Lemay) was suspected to be a Swainson’s Hawk (S. Denault), and later confirmed to be a juvenile dark-morph Swainson’s Hawk (Bryan Sullivan, coauthor of The Crossley ID Guide: Raptors).

After a welcomed influx of adult Red-headed Woodpecker reported last summer, fall was enlightened by an amazing number of juveniles: one at Ayers Cliff 28 Sep (S. Norrie), one at Saint-Donat 28 Sep (M. Roy), two at Dollard des Ormeaux (Montréal) 2–3 Oct (L. Alarie), one in Mount Royal Park 9 Oct (S. Coté Bourgoin), one at Saint-Alphonse-de-Caplan (Gaspésie) 19 Oct (H. Cyr, J. Lamarche), and one at Côteau-du-Lac 13 Nov (M. Jackson). Were these birds born in the province, where the species has not been confirmed nesting for about a decade? Red-bellied Woodpeckers continued to make progress in the province as revealed by confirmed breeding in Gatineau Park, where an adult male was seen with a juvenile 1 Aug (G. Seutin). This was a first for the Outaouais region. Many birds also wandered east, including one as far as Sept-Iles 17 Oct–29 Nov (I. Calderon). An Ash-throated Flycatcher at Cap-aux-Meules (Iles de la Madeleine) 7 Nov (B. Vigneault, A Couture, A. Richard, ph.) was only the second record for the province. More expected, Western Kingbirds were reported at Saint-Pascal 6 Aug (F. van Oordt La Hoz), at Cap d’Espoir 6 Sep (A. Couture, Y. Cyr), and at Rivière-au-Renard 21 Oct (C. Dufresne). A Scissor-tailed Flycatcher at Cap d’Espoir 15–18 Nov was both an amazing find and a record late date for the province (L. L. Collin). A Say’s Phoebe feeding on the beach at Portneuf-sur-Mer 11–13 Sep was admired by many (J. Normand, G. Tremblay et al.). A first year male Vermilion Flycatcher at Saint-Thomas-Didyme 20–27 Oct, found dead 28 Oct (G. Dion, C. Bellemare, m. ob.), was also only the second record for the province.

An immature male Yellow-headed Blackbird stopped at Chapais (Jamésie) 15 Nov (D. Gamelin). Exceptional in fall in eastern Québec, three Prothonotary Warblers were reported including the first for the Gaspé Peninsula at the Coin du Banc banding station (Percé) 2 Sep (A. Cristiano et al.), the second one was detected at Rimouski 3 Sep (G. Gendron, D. Ruest), and the third one was photographed on a beach at Franquelin 18 Sep (G. Labrie, ph.). A Connecticut Warbler at Mansonville 16 Oct appeared to be a first occurrence for the Eastern Townships (R. Carswell). A Blackburnian Warbler photographed at Brossard 3 Nov (M. Manolova) was late and most likely only the third ever for Nov. Single Yellow-throated Warblers stopped at Sept-Iles 12–13 Oct (Y. Duchesne, ph.), at Québec City 2–30 Nov (S. Blais, m. ob.), and at Pointe Saint-Pierre 6 Nov (D. Jalbert, A. Gagnon). The only Prairie Warbler of the season made a brief appearance in Forillon NP 18 Oct (D. Jalbert, A. Gagnon). A male Summer Tanager at Lévis 22 Oct–15 Nov (M. O’Neill, m. ob. ph.) was also the only report of this regular fall vagrant. A well-described Western Tanager made a brief stop at Pointe-Saint-Charles (Montréal) 2 Nov (MC. Morin, G. Bolduc).

Northern Cardinals exhibited its greatest post-nuptial flight in over 25 years with dozens (hundreds?) of birds involved in a huge movement towards eastern Québec and the Saguenay-Lac Saint-Jean region this fall; a male even reached Chevery (Lower North Shore) 8 Nov (S. Vatcher), the furthest east ever reported for the species on the Lower North Shore, while almost every villages along the Gaspé coast were visited by the species. A female Painted Bunting at l’Anse-au-Griffon 13–17 Nov (C. Côté, ph., m. ob.) was part of a steady increase in records for this species in the last decade. At least 30 Dickcissels were reported in the province, many of which were on the Gaspé Peninsula.

Photos–Québec: Fall 2020
Hover on each image to read the caption. 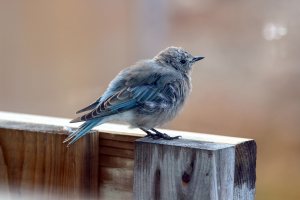 This Mountain Bluebird was photographed 9 Sep 2020 at Ivujivik near the northernmost location in the province of Québec. Photo © Marc Vachon. 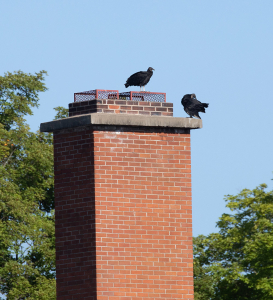 These two Black Vultures, presumably a pair, lingered at Saint-Armand near the Vermont border for a period of two weeks in late Aug (here 18 Aug 2020). The species has been observed more frequently in the province over the last few years. Photo © Suzanne Labbé. 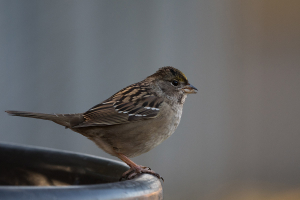 This immature Golden-crowned Sparrow was photographed 5 Nov 2020 at Rimouski. The species has now been identified four times in the province, all records since 2011. Photo © Simon Boivin. 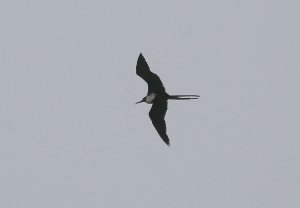 This female Magnificent Frigatebird was photographed at La Malbaie 10 Sep 2020, providing a third record for the province of Québec. Considering the increased presence of the species in the central USA this season—presumably attributable to the record number of hurricanes impacting the coast of the Gulf of Mexico—it is suspected that this bird originated from the gulf. Photo © Christine Lepage. 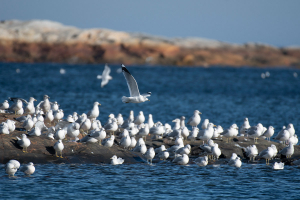 This impressive flight shot of an adult Mew Gull belonging to the European subspecies (Larus canus canus) was taken at Les Escoumins on the North Shore 10 Nov 2020. Photo © David Turgeon. 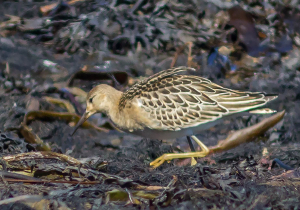 Ruffs are one of our most regular vagrants from Europe. This juvenile bird was photographed at l’Anse-au-Lard near Rimouski 17 Sep 2020. Photo © Brigitte Arseneau. 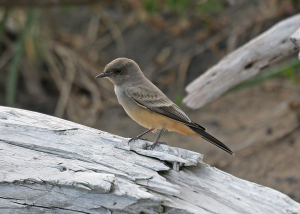 This Say’s Phoebe, a more or less regular vagrant from the west, was photographed at Portneuf-sur-Mer 11 Sep 2020. Photo © Christine Lepage. 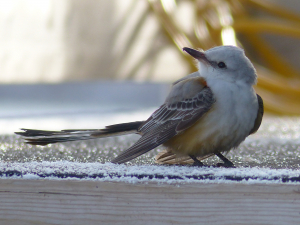 This immature Scissor-tailed Flycatcher was photographed at Cap-d’Espoir on the Gaspé Peninsula 18 Nov 2020, contributing a new record late date for the province of Québec. Photo © Réjean Deschênes. 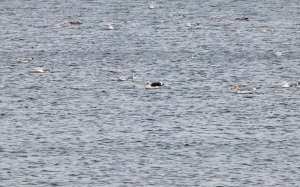 Although taken from a distance on Lake Osisko, Abitibi 16 Nov 2020, this photograph allows us to see some field marks that strongly suggest Slaty-backed Gull, and exclude Lesser Black-backed Gull. Photo © Michel Marsan. 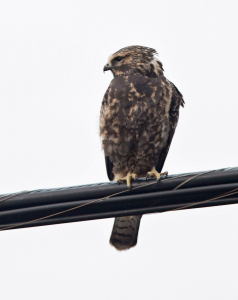 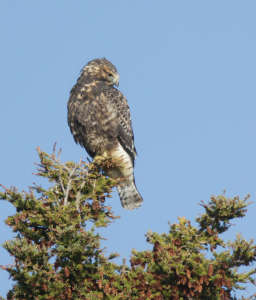 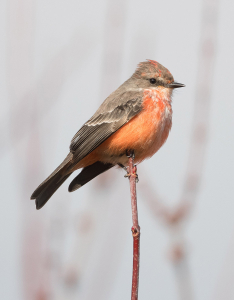 Certainly the most spectacular bird of the season, this Vermilion Flycatcher was photographed at Saint-Thomas-Didyme, Lac Saint-Jean region, 22 Oct 2020. Sadly, the bird was found dead 28 Oct 2020. Photo © Simon Boivin. 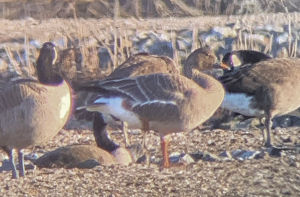 Certainly the most unexpected bird of the season, this Tundra Bean-Goose was photographed at Masson, Outaouais region, 8 Nov 2020. Unfortunately for Québec birders, and fortunately for Ontario birders, the bird moved on the Ontario side of the Ottawa River later on the same day. Photo © Gregory Rand.