Fall weather was very variable depending on the period and the region. Continuing the same weather pattern that prevailed in July, August was warm and dry but there was an abrupt change to cool and wet conditions in early Sep. Oct turned mild again, but the end of the month was spoiled by a heavy rain and windstorm on Halloween day. The coldest Nov in 83 years in the south, and a very early snowstorm on 11–12 Nov, plunged the province into deep winter conditions, lessening the chances to unearth late fall vagrants. The most remarkable rarities of the season were Common Ringed Plover, Black-tailed Gull (new for the region), Gull-billed Tern, Swallow-tailed Kite, and Painted Redstart.

Despite being almost extirpated as a breeding species, Red-headed Woodpeckers continue to be a regular vagrant with singles at Mont Saint-Hilaire 1–9 Nov (Gérald Fréchette, m.ob.), and at Wotton 3 Nov (Daniel Banville). Quite surprising were no less than 5 White-eyed Vireos reported in a short period of time, with one at Île Saint-Bernard (Châteauguay) 19 Oct (Jacek Mlynarek), another at Park Angrignon (Montréal) 25–31 Oct (Marc-André Villard), one at Maizerets (Québec City) 25–29 Oct (Charles Vachon), one at Rivière Magpie 8 Nov (Christophe Buidin, Yann Rochepault), and the latest being at Gatineau 10 Nov (Clark Sollows).

Exceptional for the Gaspé Peninsula, a Northern Rough-winged Swallow was photographed at Percé 16 Oct (A. Couture). The latest House Wren in decades was at the Montréal Technopark 24–26 Nov (Samuel Denault, Charles Samoisette-Pilon). A total of 4 reports of Northern Wheatear were tallied this season with 2 at Wemindji 9 Sep (Ted Cheskey), singles at Gallix 15–16 Sep (Marielle Vanasse), Sept-Îles 18–22 Sep (Christian Briand et al.), and an individual at Pointe-au-Père 6 Oct (Lucille Saint-Laurent, Mikael Jaffré). A Wood Thrush at Gatineau 13 Nov was record late (Laetitia Desbordes). The only Varied Thrush of the season was at Sainte-Marthe-sur-le-Lac 17–20 Nov (Sylvain Lapointe).

Breeding Grasshopper Sparrows are now rare in the province, so a juvenile at Bristol 4 Aug was interesting (Eric Patry). Single Lark Sparrows at Tadoussac 15 Oct–27 Nov (Laetitia Desbordes, Jessé Roy-Drainville), and at Rivière-Madeleine 3–7 Nov (Georgette Blanchette) were somewhat expected, but a long staying individual in Montréal Technopark 24–30+ Nov (Samuel Denault, Charles Samoisette-Pilon) finally provided a first record for the Greater Montréal area. A Nelson’s Sparrow of the altera/nelsoni group was documented for the first time on the North Shore with one at Pointe de l’Islet (Tadoussac) 26 Oct (L. Desbordes, A. Desrochers, ph.), while two birds at Grenville-sur-la-Rouge 28 Sep (Yves Gauthier, ph.) appeared to be on a regular migration path. The only Yellow-breasted Chat of the season came from expected location Percé 6 Nov (Albini Couture). An immature Yellow-headed Blackbird was spotted in a large icterid roost at Saint-Armand 13 Oct (Olivier Barden). A Western Meadowlark formally identified from photographs taken by many observers at Saint-Simon-de-Bagot 16–18 Nov (Nelson Roy, m.ob.) was the first in 20 years from Montérégie.

A Prothonotary Warbler at Châteauguay 3–8 Sep (Tristan Jobin et al.) was one of very few fall records in the region. A Pine Warbler was found at Val d’Or 30 Nov onwards, one of very few documented records for the Abitibi region (Claudia Siano, Raymond Ladurantaye). A Yellow-throated Warbler visited a feeder at Deux-Montagnes 25–30 Nov (Sophie Janelle, Joanie Lavigne). All three reports of Prairie Warbler this season came from the Gaspé Peninsula with one at Percé 9 Oct (Albini Couture), one at Port-Daniel 27 Oct (Albini Couture, Yvette Cyr), and the last individual at Gaspé 28 Oct (Jean-François Rousseau).  Nobody expected Québec’s second Painted Redstart to be found a little more than two years after the first record, but one brightened Trois-Rivières 18–19 Oct (Gilles Garant, ph.). A Dickcissel at Sherbrooke 4–6 Nov was a really good find for the Eastern Townships (Renée Audette).

Photos–Quebéc: Fall 2019
Hover or click on each image to read the caption. 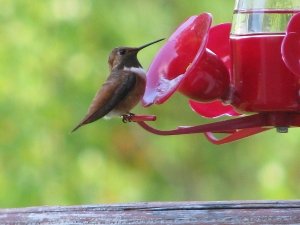 This Rufous Hummingbird observed at Matapédia 17 September furnished the tenth record for the province. Photographed by © Christianne Pitre. 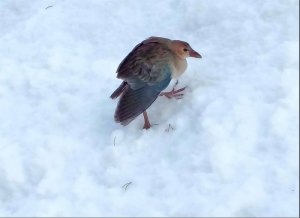 This Purple Gallinule at Girardville 24 November did not seem to appreciate the snow. Photographed by © David Gagnon. 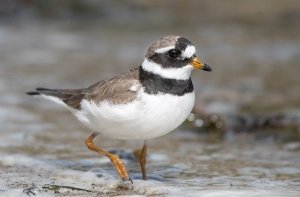 This Common Ring-Plover at Petit-Saguenay 28 August furnished a fifth record for the province. Photographed by © Annie Lavoie. 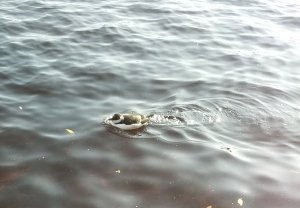 Always rare inland, this Razorbill at Shawinigan 13 October was a welcomed sight. Photographed by © Caroline Vouligny 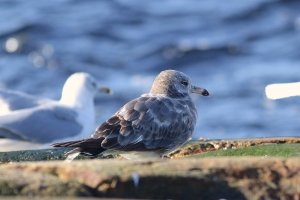 Another first for the region, this second-cycle Black-tailed Gull at Tadoussac 21 October was nicely documented. Photographed by © Olivier Barden. 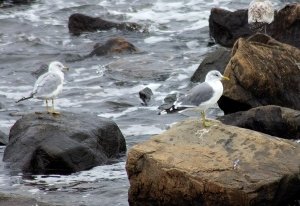 This adult Mew Gull (presumably ssp camtschatchensis) at Baie-Comeau 21–22 August (here 21 August) was one of 3 different individuals reported this season in the province. Photographed by © Jean-Pierre Barry. 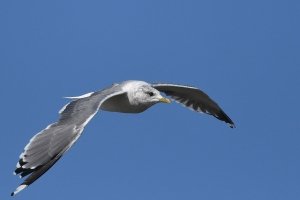 This adult Mew Gull (undetermined ssp) at Kamouraska 30 August was one of 3 different individuals reported this season in the province. Photographed by © Marie O’Neill. 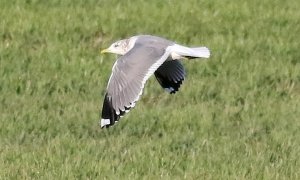 This adult Mew Gull (presumably ssp camtschatchensis) at Notre-Dame-des-Pins 4 November was one of 3 different individuals reported this season in the province. Photographed by © Olivier Barden. 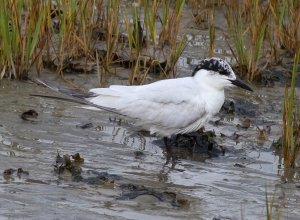 This Gull-billed Tern was one of 2 present together at Kamouraska 16–22 September (here 16 September). This record was only the second for the region. Photographed by © François Smith. 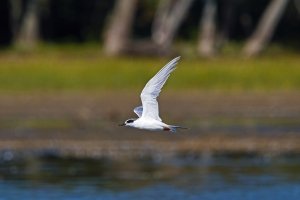 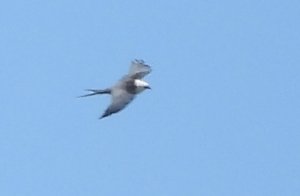 This Swallow-tailed Kite seen here at Saint-Hyacinthe 12 September represented the seventh record for the province. Photographed by © François Bourret. 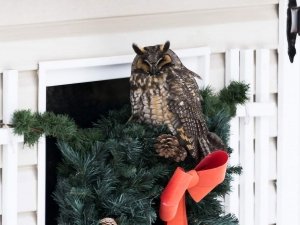 This Long-eared Owl was not expected to be found in this artificial habitat at Hull 12 November. Photographed by © Pierre Sigouin. 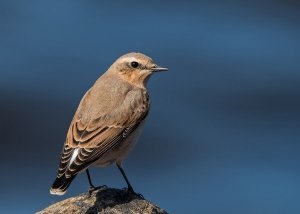 Although rare, this Northern Wheatear at Sept-Iles 18–22 September (here 23 September) was not unprecedented for the province. Photographed by © Christian Briand 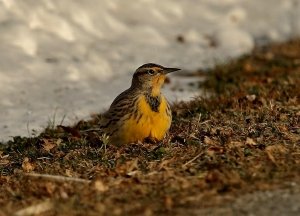 This Western Meadowlark at Saint-Simon-de-Bagot 16–18 November (here 16 November) was carefully identified by observers of southern Québec. Photographed by © Jacques Haineault 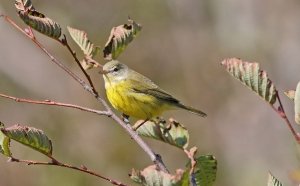 The Prairie Warbler, here at Percé 9 October, is one of our most regular vagrant in the province. Photographed by © Albini Couture. 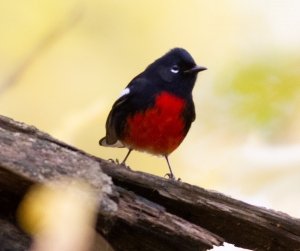 This Painted Redstart at Trois-Rivières 18–19 October (here 18 October) provided a second record for the province. Photographed by © Gilles Garant.