Continuing the same weather pattern that prevailed since late June, August and September were both very hot months. This trend ended abruptly in late September, giving way to very cool temperatures in October and November. Snow covered the ground as early as mid-November in Montréal. The most remarkable rarities of the season were a Broad-billed Hummingbird and a Roseate Spoonbill, both new species for the region. Another unexpected species was a Magnificent Frigatebird, only the second for the region.

A Black-bellied Whistling-Duck continued at Parc Nature Pointe-aux-Prairies (Montréal) until 14 Aug, but then reappeared 21 Oct–4 Nov, providing a regional record late date for this species (Y. Gauthier, m.ob.). Single Mute Swans visited Drummondville 1–7 Aug (F. Bourret) at four localities, all located near the east end of Montréal 22 Aug–22 Sep (m. ob.). The two Trumpeter Swans that summered at Saint-Fulgence (Saguenay) remained there until 21 Oct (C. Cormier, G. Savard), while two others appeared briefly at Adstock 25–26 Oct (A. Girard, A. Gagné, G. Châteauneuf). Now rare in the province, up to 10 Canvasbacks were at Laval 20–29 Oct (G. Lachaine et al), and three at Candiac 8–11 Nov (m.ob.). A Harlequin Duck paused at LaSalle (Montréal) 22 Nov (J.M. Lacoste). A White-winged Dove stopped at Pointe-aux-Outardes 21 Sep (E. Hains, E. Brotherton). An imm male Rufous Hummingbird was nicely photographed at Saint-Roch-des-Aulnaies 3 Sep, providing a ninth record for the province (C. Auchu, C. Girard). The most spectacular find of the season was a male Broad-billed Hummingbird that visited a feeder at a private residence at Saint-Lambert-de-Lauzon 18–29 Sep, a first record for the province (J. Pedneau, m.ob.). Surprisingly, it was later discovered that the bird had moved to another residence only 200 meters away, where it was picked up dead 22 Nov after a very cold night (fide G. Lord).

A total of four Northern Wheatears was near seasonal average, with one at Trois-Pistoles 11–17 Sep (JE. Joubert), one at Lévis 26 Sep (J. Bernier), one at Longue-Pointe-de-Mingan 28 Sep (M. Priéto) and one at Rivière-aux-Outardes 21 Oct (D. St-Laurent). The only Townsend’s Solitaire of the season was at La Baie 23–24 Oct (A. Lavoie et al). A Louisiana Waterthrush photographed at North Hatley 12 Aug (A. Côté, G. Lemelin, M. Raymond et al) was the first ever documented in this month for the region. An excellent total of four Prairie Warblers was reported this fall: one at Île des Soeurs 23–25 Aug (B. Bellocq, m. ob), one at Maizerets (Québec City) 19 Sept (D. Campeau), one at Parc Forillon 22 Sept (D. Jalbert) and one at Cap Tourmente 30 Sept (L. Messely, JF Bédard). A Yellow-breasted Chat was banded at the Cap Tourmente banding station 22 Sept, providing one of many records of this species at this location (P.A. Dumas et al).

The Lark Sparrow was unusually rare this fall, with only one reported at Bonaventure 30 Sept (J. Charette). A Grasshopper Sparrow at Saint-Basile (Portneuf) 1 Oct (S. Blackburn, S. Lemieux) represented a very rare fall migrant for the region. Up to four Nelson’s Sparrows at Pumpkinseed Bay (Grenville-sur-la-Rouge) 1–13 Oct (J. Bouvier) seemed to indicate a natural migratory stopover along the Outaouais River for the James Bay population. A Field Sparrow at Bassin 27 Oct (C. Roy) was one of only few records for Îles-de-la-Madeleine. A total of four Summer Tanagers was not completely unexpected for this regular vagrant. One was photographed at Pierrefonds 27 Sept (E. and J. Horack), one lingered at Bécancour 1-12 Nov (F. Arbour, m. ob.), one stopped at Matapédia 7 Nov (C. Pitre), and a last one was at Sherbrooke 9 Nov (S. Mercier). A Western Meadowlark at Pabos Mills 8 Oct–6 Nov (W. de Merchant) adds up to the many records of this species in the past decade in eastern Québec. A male Orchard Oriole at Saint-Ferdinand 8 Aug and a female the following day (G. Huot, J. Carpentier) were notable. 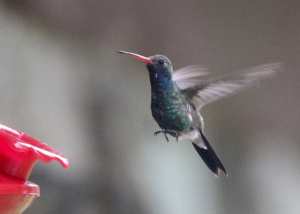 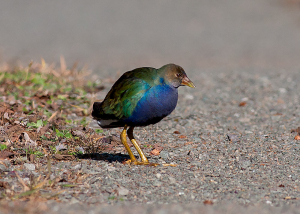 This Purple Gallinule was a one-day wonder at Chandler, QC on 8 November 2018. Photo © Albini Couture. 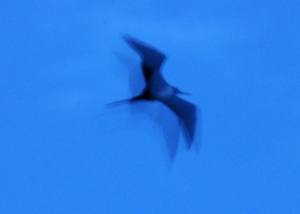 This Magnificent Frigatebird was spotted 16 September 2018 from a fishing boat in the Gulf of St. Lawrence, QC. Photo © Mylène Dufour. 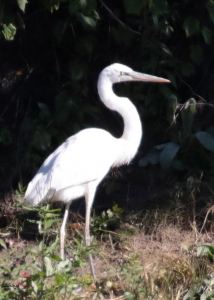 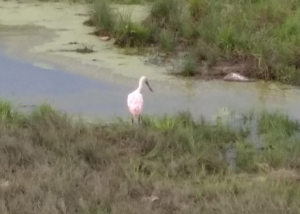 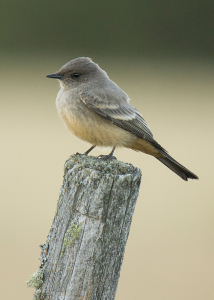 The Say’s Phoebe is always an excellent find in Québec. This one was found at Bergeronnes 12 September 2018. Photo © David Turgeon. 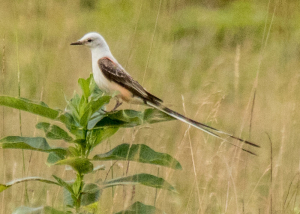 The Scissor-tailed Flycatcher has now been seen slightly more than 30 times in Québec. This one was discovered at La Minerve 6 August, 2018. Photo © Fannie Mathieu. 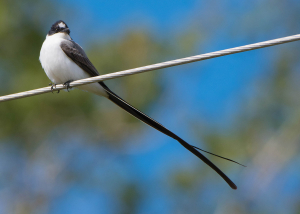 This Fork-tailed Flycatcher, observed at Normandin, Québec 1-10 September 2018 (here 2 September), was one of two found in the province this fall. Photo © Josée St-Hilaire. 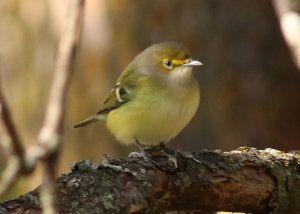 The White-eyed Vireo is a rare but regular vagrant in Québec. This individual lingered at the Montréal Botanical Gardens 24 October–21 November 2018 (here 24 October). Photo © Émile Brisson-Curadeau.