Above normal temperatures persisted for the entire period. August was the warmest in 70 years in southern Québec. Warm and dry conditions continued well into September, resulting in very low water levels along the north shore of Lake Champlain (Missisquoi Bay), thus creating excellent shorebird habitat. A variety of 23 different species with peaks of 600 individuals were found in August and September. October was cooler but remained slightly above normal. November was 2°C to 3°C above normal in the south. Rarities included 2 Common Shelducks, a Clapper Rail, 2 Common Ringed Plovers, a Rufous Hummingbird, a Western Wood-Pewee, and a Black-headed Grosbeak.

A Clapper Rail  at Barachois 9 Oct. (JF. Rousseau, m.ob., ph.) provided the second record for the Region, both of them in Gaspésie. A high count of 4000 Sandhill Cranes at Nédélec 5 Oct. was noteworthy (N. Saint-Amant). The most amazing find of the season was the appearance of two Common Ringed Plovers: an adult at Pointe Yamachiche 17-18 Aug (JC & A. Charrette, m.ob., ph.) and a juvenile in Missisquoi Bay (Saint-Armand) 10-14 Sep., a Regional record late date (G. & R. Boulet, m.ob., ph.). These two birds furnished the 4th and 5th records for the Region. Single Marbled Godwits  turned up at Les Escoumins 25 Aug. (JG. Beaulieu) and at Rimouski 2 Sep. (GG). A juvenile Western Sandpiper reported in Missisquoi Bay 9 Sep. (M. Resch, C. Caron, R. Boyer) was relocated 14 Sep. (JML-T et al.) and photographed by many until 21 Sep. A late Buff-breasted Sandpiper on Niapiskau Is, near Mingan 9 Oct. was notable (YR, CB). It was also a good season for the Long-billed Dowitcher; one at Havre-aux-Basques (Magdalen Is.) 13 Nov. was notably late (AR). Always unpredictable inland, a Red Phalarope was sighted at Boucherville 1-2 Nov. (J. Hénault, m. ob.).

A late flycatcher wound up in the mist nets at Cap Tourmente 1 Oct., prompting bander PA. Dumas and scribe JML-T to carefully double-check all measurements entered in a formula, putting this squarely in the Western Wood-Pewee camp, a potential first documented record for the Region. In the afternoon following release, it was refound and heard singing (J. Bernier, m.ob.), indeed validating the in-hand verdict.

A Western Kingbird at Pointe-aux-Outardes 23 Sep. was the only one found this season (E. Brotherton, fide JP.B). A White-eyed Vireo at Saint-Donat-de-Montcalm 2 Nov. (P. Martin, ph) was the first ever record for Lanaudière. Two unidentified swallows seen at Ile Sainte-Bernard (Châteauguay) 10 Nov. (MLB, S. Cardinal) were positively identified as Cave Swallows the next day (PB, S. Labbé, CS, RL et al.), and photographed by many until 14 Nov. There was a notable White-breasted Nuthatch dispersion northward into the Abitibi, Lac-Saint-Jean, and North Shore regions in Oct. and Nov. The northernmost bird, most likely ever, reached Chibougamau 24 Oct.-26 Nov. (AA, HM. Johansen). A family group of 4 Blue-gray Gnatcatchers at Saint-Armand can now be considered as a noteworthy breeding confirmation (RD, A. Fouillet) while a late bird was found at Châteauguay 15 Nov. (MLB).

A record flight of over 13,870 Pine Grosbeak was recorded at Tadoussac mostly between late Oct. and mid-Nov., including over 5,285 indivuals on 25 Oct.(OB). A record high number of 125 Red Crossbills (from the type 10 ecotype) was also recorded at Tadoussac 13 Nov. (OB), where a total of 362 individuals were tallied for the season.

Photos–Québec: Fall 2016
Hover or click on each image to read the caption. 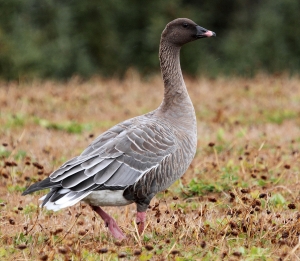 This Pink-footed Goose at Fermont 16 Oct. was the northernmost found in the province. Photo by © Mélanie Plante 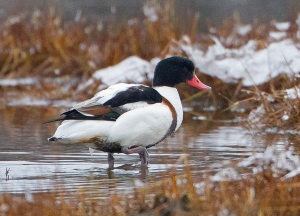 This Common Shelduck at Gallix 29 Nov.-8 Dec. (here 6 Dec) was considered a genuine straggler from Europe by the Québec Bird Record Committee. Photo by © Bruno Duchesne 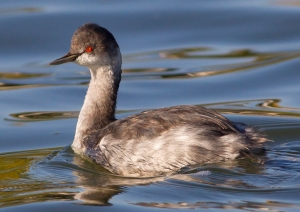 While canoeing on Lake Roxton 6 Oct., a lucky observer spotted this bird which he first thought was a Horned Grebe but that was later identified as a Eared Grebe. Photo by © Bertrand Duhamel 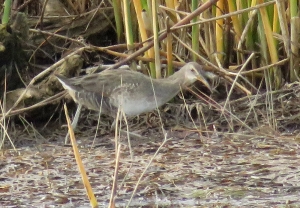 This Clapper Rail was found at Barachois 9 Oct., providing the second record for the province, both records from Gaspésie. Photo by © Jean-François Rousseau 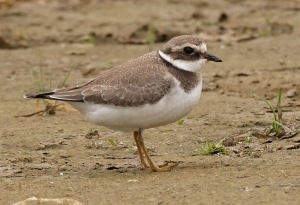 This juvenile Common Ringed Plover, one of two in the province this fall, was observed at Saint-Armand 10-14 Sep. 2016 (here 14 Aug.). Photo by © Réal Boulet 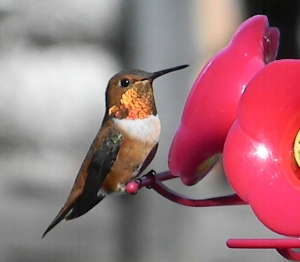 This Rufous Hummingbird at Chapais 8-15 Aug. 2016 (here12 Aug) represented the northernmost record in the province. Photo by© S. Bélanger. 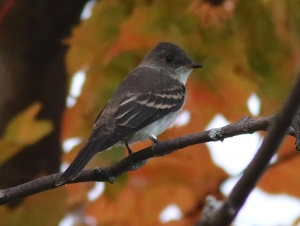 This Western Wood-Pewee, a first in the province, was banded at Cap Tourmente 1 Oct. 2016. Photo by © Olivier Barden. 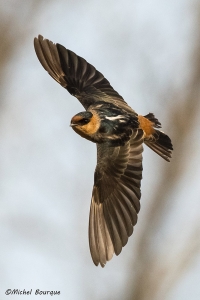 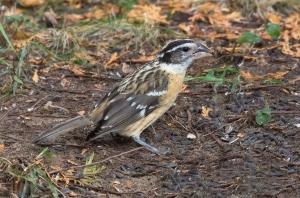