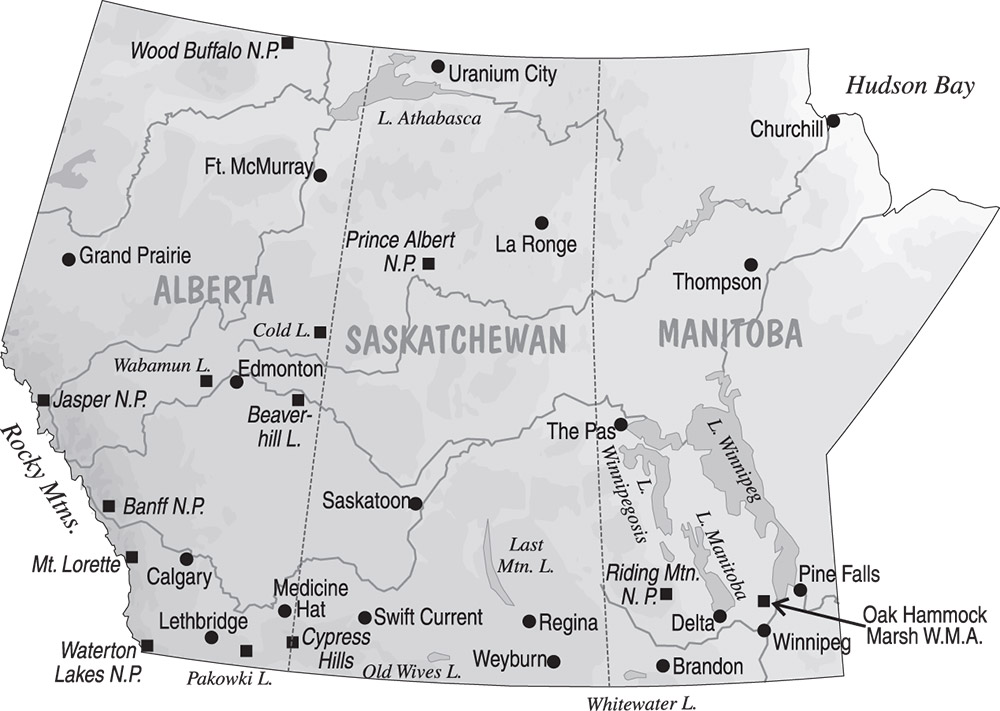 After several years with reasonably moderate winters across the southern Prairie Provinces, the winter of 2021–2022 was one characterized by severe cold spells, often very windy conditions and much greater-than-average snowfall, especially in Manitoba, where it was the third-snowiest winter in over a century. In Alberta the Christmas week was the coldest in 50 years, which discouraged many potential Christmas Bird Count (CBC) participants. It was a poor winter for “northern” owls and Gyrfalcons in southern Alberta, but farther to the east these species were more prominent. Winter finches were a mixed bag: low numbers (especially crossbills) in Alberta, with average numbers towards the east of the region. White-winged Crossbills were fairly prominent early in the season in Manitoba, but virtually disappeared later on, as cone crops dwindled.

The only shorebirds reported were a Killdeer at Gardiner Dam on 1 Dec (Ryan Dudragne), a Wilson’s Snipe at Swift Current, SK 11–16 Dec (Rita McLachlan, ph.) and another Wilson’s Snipe at Fish Creek P.P., AB 12 Dec (Dave Clark, ph.). A Glaucous Gull was the only gull of note during the season, at Dewdney, in the Regina area, on 26 Dec (Gail Fennell, ph.). A Pacific Loon at Barrier Lake, AB 2 Dec was tardy (Caroline Lambert, ph.), while the Yellow-billed Loon found at Gardiner Dam on 21 Nov 2021 was last reported on 4 Dec (Ryan Dudragne, m. ob.). For the second winter in-a-row an injured American White Pelican wintered successfully at Frank Lake, AB (m. ob., ph.). Sharp-shinned Hawk reports came from Regina, Saskatoon, Neilburg, Red Wing, Moose Jaw and Swift Current, all in Saskatchewan, and Brandon, Carman, Cornwallis, Glenboro, Killarney, Portage la Prairie, Steinbach and Winnipeg in Manitoba. Both Western and Eastern screech-owls continue to be reported from undisclosed locations in southern Alberta, where birds were photographed and audio-recorded (anon). Snowy Owls were particularly prominent southwest of Winnipeg, where a two-hour drive could easily deliver 20 birds late in the season. The Prince Albert, SK region witnessed a Great Gray Owl irruption, while fair numbers were found in southeast Manitoba. Most Short-eared Owl reports came from Saskatchewan, with a maximum count of 10 in the Regina area on 20 Dec (Alan Smith). Wintering Boreal and Northern Saw-whet owls suffered due to deep snow in the later stages of the winter in southern Manitoba, where several starved birds were found. A Belted Kingfisher at Canmore, AB 19 Jan was a mid-winter rarity (Nicholaus Vieira). A Red-bellied Woodpecker at Calgary, AB 18 Jan was a one-day wonder (Reagan Burns-Luck, ph.). Another at Watrous, SK, present since 4 Dec, was last seen 7 Jan (Sharlene Toole, ph.). A hybrid American Three-toed Woodpecker x Black-backed Woodpecker at Calgary, first noted 13 Jan, remained into March (m. ob., ph.). Also rare was a hybrid Yellow-shafted x Red-shafted Flicker at Morden, MB 12 Dec (Carol Holmes, ph.).

A Black-capped Chickadee x Mountain Chickadee hybrid spent all of January and February at Calgary (Ray Saulnier, ph.), while an aberrantly-plumaged Boreal Chickadee spent most of the winter near Cochrane, AB (Maureen Hills-Urbat, ph.). A Gray Catbird at Banff, AB 2 Dec was late (James Bannon), while an Eastern Bluebird at Winnipeg on 12 Dec was Manitoba’s second-latest ever (Piotr Czaykowski, ph.). Both Saskatchewan and Manitoba hosted an above-average number of Townsend’s Solitaires: there were at least 10 in the former province and five in the latter. Varied Thrushes were prominent in Manitoba, with a record-high five noted during the Winnipeg CBC and several others elsewhere. A Eurasian Tree Sparrow was a one-day wonder at Steinbach, MB 6 Dec (Harv Lane, Dennis Fast, ph.), while a hybrid Eurasian Tree Sparrow x House Sparrow was seen on the Winnipeg CBC 19 Dec in the same location where a Eurasian Tree Sparrow had been present for a few years starting in 2014 (Garry Budyk, John Weier, ph.). Evening Grosbeaks continue their decline in the Prairie Provinces. A Lesser Goldfinch was first observed 20 Feb at Pincher Creek, AB, where it remained well into March and was seen by many (Lisa Salonen, ph., m.ob.). Chipping Sparrows were recorded on the Oak Hammock Marsh CBC 18 Dec and the Pinawa/Lac du Bonnet, MB CBC 29 Dec. Equally rare in winter were a White-crowned Sparrow at Prince Albert 16 Dec (fide Vicki St Germaine), a Harris’s Sparrow in the Pembina River valley, MB 27 Feb (Carol Holmes, ph.) and a Song Sparrow at Regina, 21 and 27 Feb (Laurel Stang, ph.). An Eastern Towhee lingered at Sherwood Park, AB from fall to 12 Dec (m. ob., ph.). A Cape May Warbler at Devon, AB was last seen 15 Dec (Doug Macauley, ph.) and the Pine Warbler first reported in Nov at Elk Island NP, AB remained until 12 Dec (m. ob., ph.). A Northern Cardinal at Lloydminster 12 Feb was an Alberta rarity (Dean Elward).

During the summer of 2021 Birds Canada placed a number of Autonomous Recording Units (Wildlife Acoustics Song Meter Mini) in grassland areas in southwest Manitoba. During analysis of these recording the following species were noted: A Common Poorwill in atlas square 14LV44 on 13 Jun and another Common Poorwill in atlas square 14LA73 on 15 Jun. In addition, a Brewer’s Sparrow in square 14MV28 was recorded on 29 Jun. If accepted by the Manitoba Ornithological Records Committee, the poorwills will represent the first confirmed records for the province and the Brewer’s Sparrow the second.

Shorebirds of any kind are rare in winter in the Prairie Provinces, but occasionally one lingers into the season, such as this Wilson’s Snipe at Swift Current, Saskatchewan on 16 Dec 2021. Photo © Rita McLachlan.

For the second year in-a-row an American White Pelican, nicknamed Elsa, seen here on 29 Jan 2022, wintered successfully at Frank Lake, Alberta. Unable to fly due to a shoulder injury in late fall, the injury apparently healed during the winter, as witnessed by the photo here. Photo © Rain Saulnier. 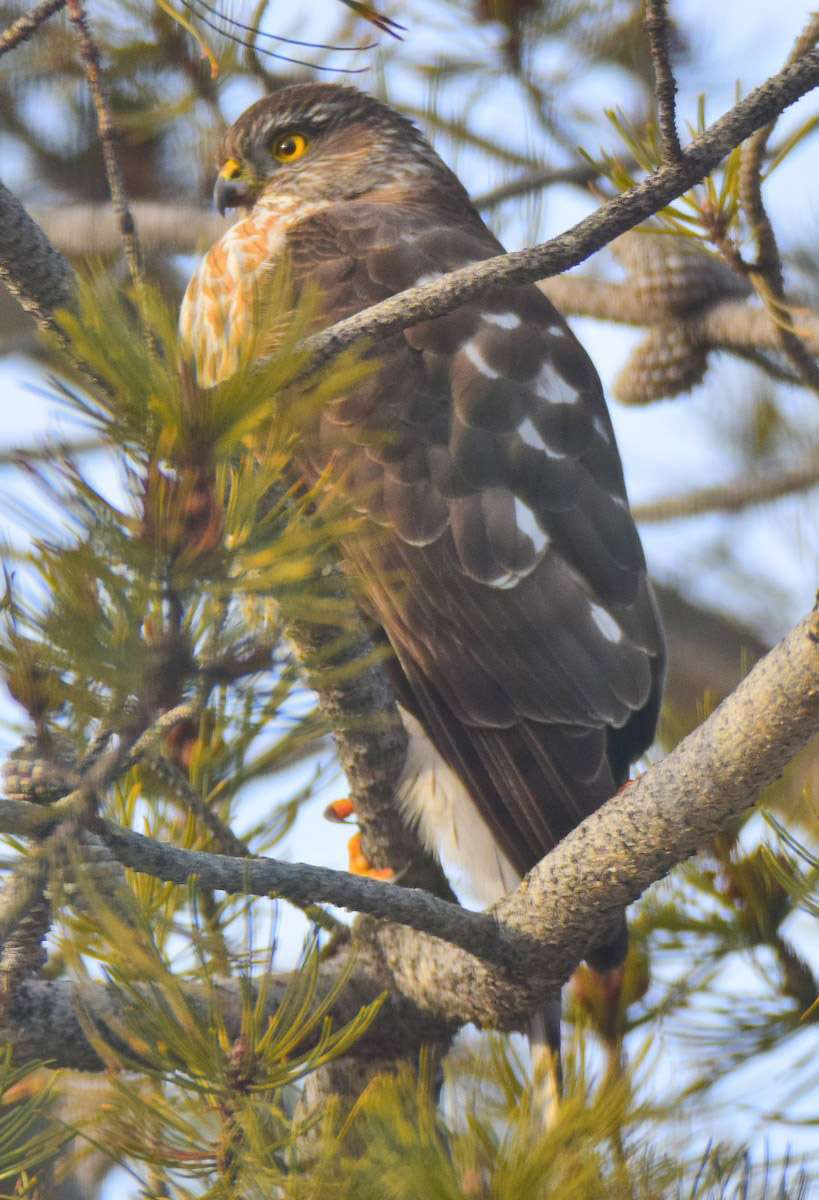 Sharp-shinned Hawk has become a regular – albeit scarce – winter bird in the southern Prairie Provinces in the last three decades. This bird was at Saskatoon, Saskatchewan on 18 Feb 2022. Photo © Bob Godwin. 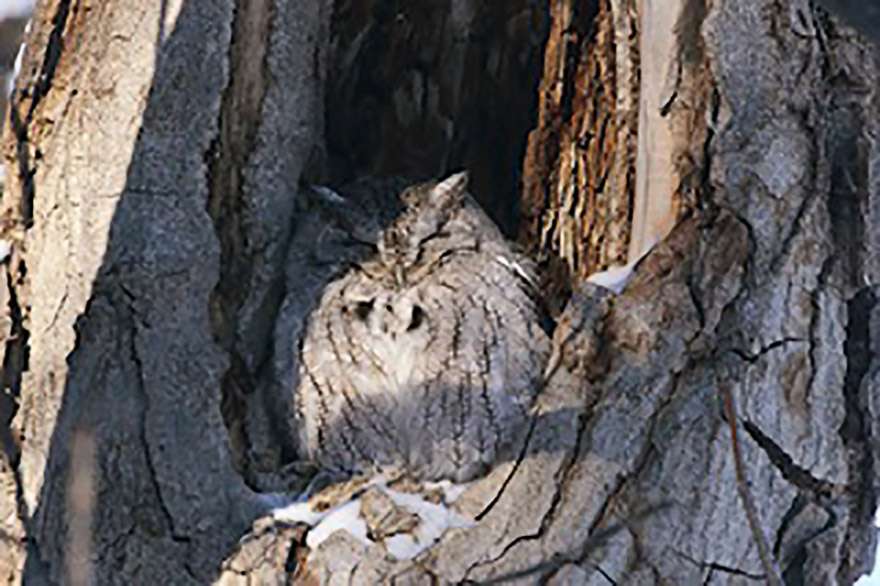 As reported in recent issues of North American Birds, both Western and Eastern screech-owls have been found in southern Alberta in the past few years. This Eastern Screech-Owl was at an undisclosed location during the winter of 2021 – 2022. Photo © Dan Schiebelbein. 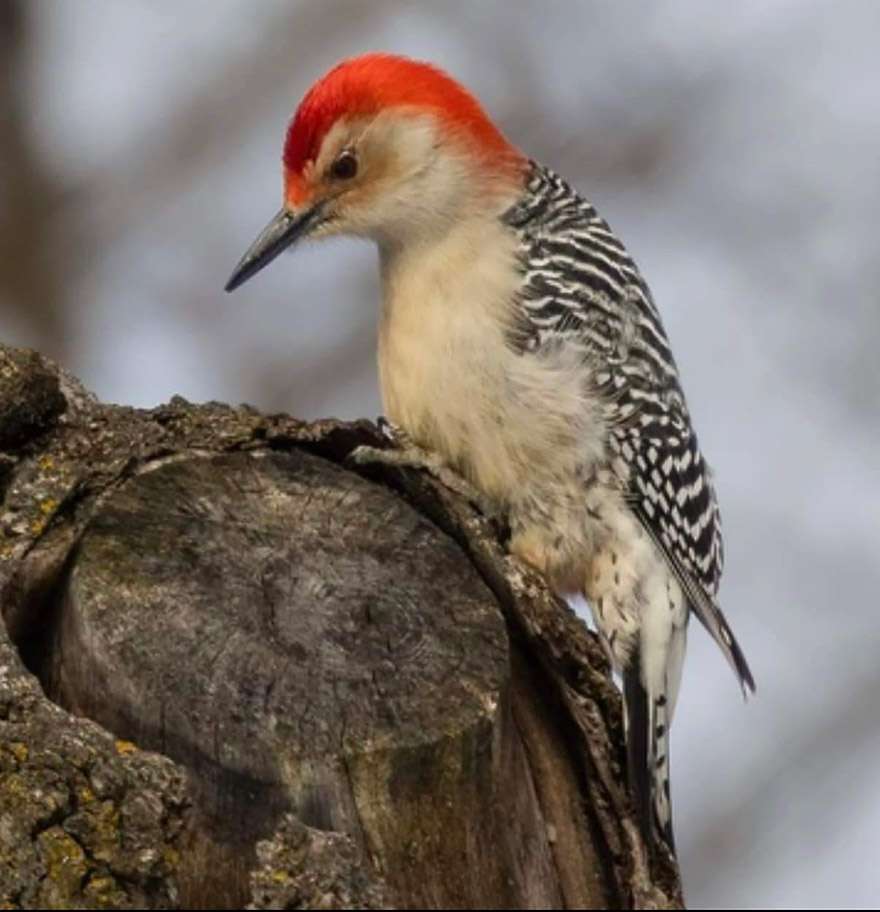 While Red-bellied Woodpeckers have established a small breeding population in southern Manitoba, the species is still rare in Saskatchewan and Alberta. This bird was at Calgary, Alberta on 18 Jan 2022. Photo © Shawn Luck. 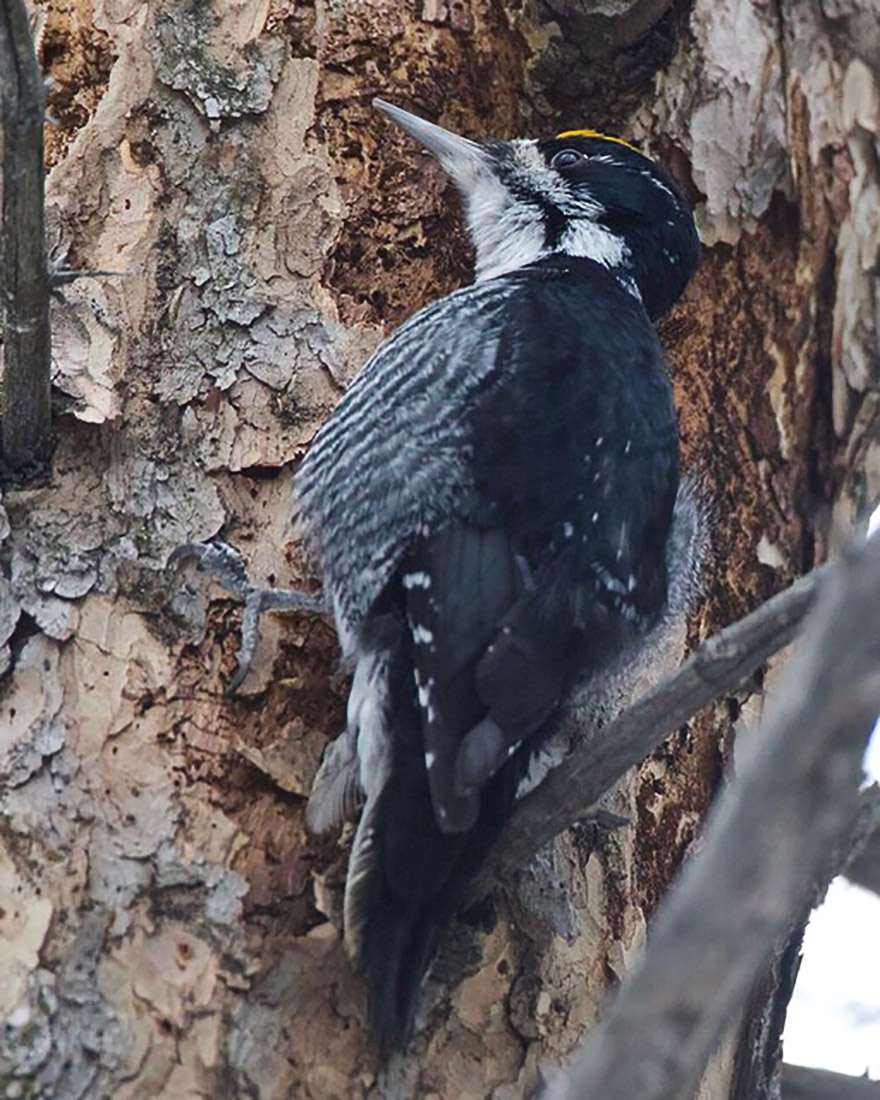 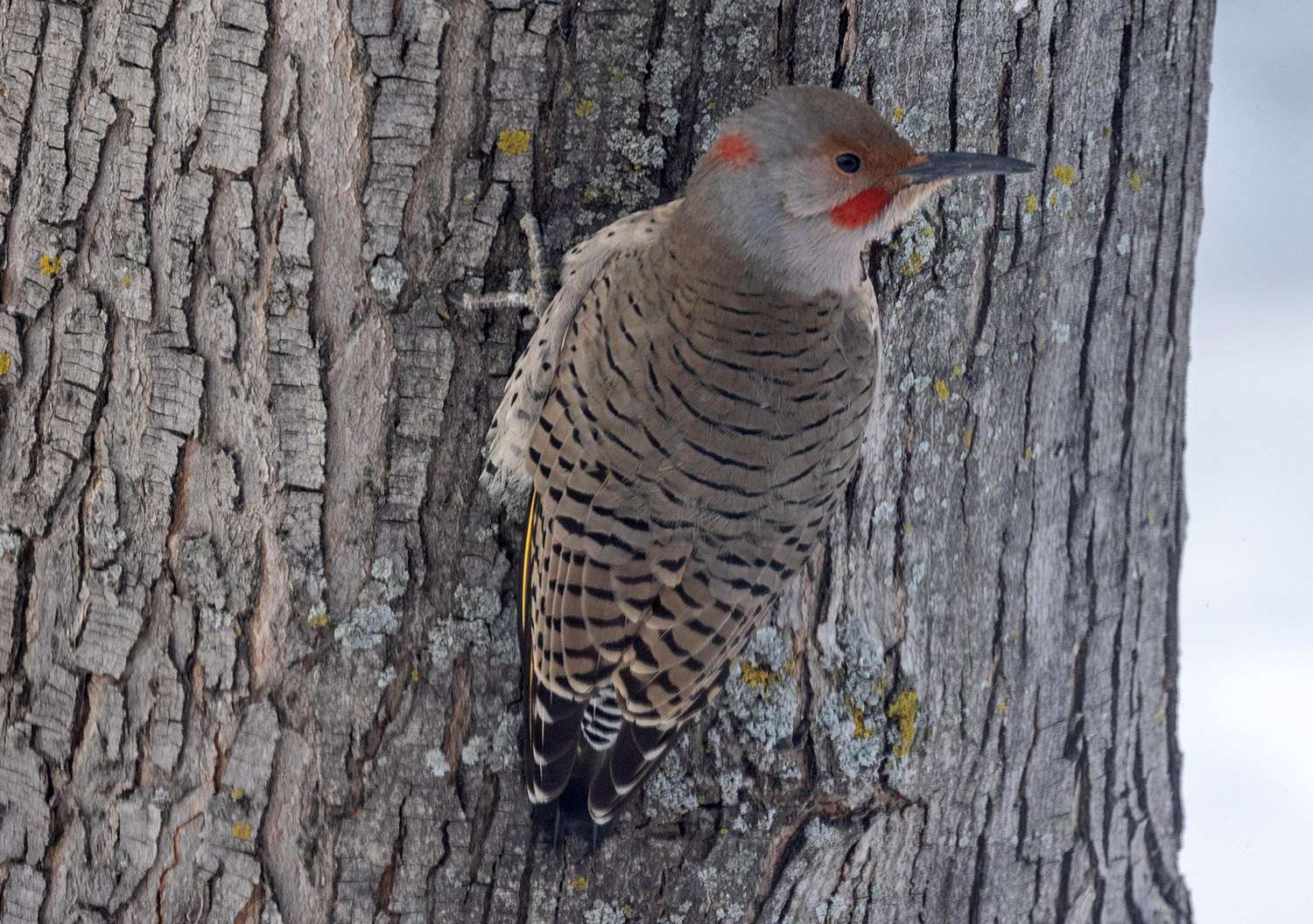 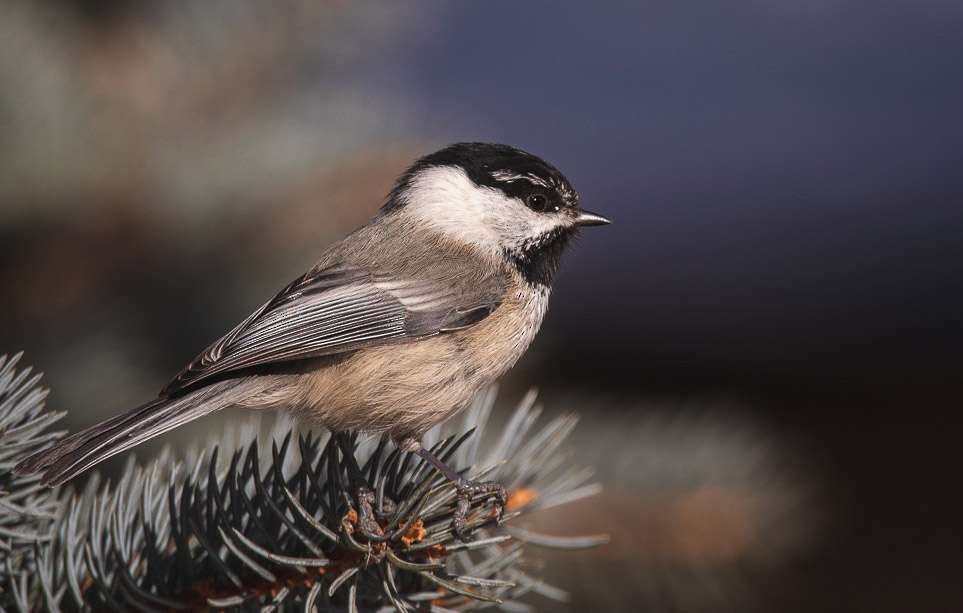 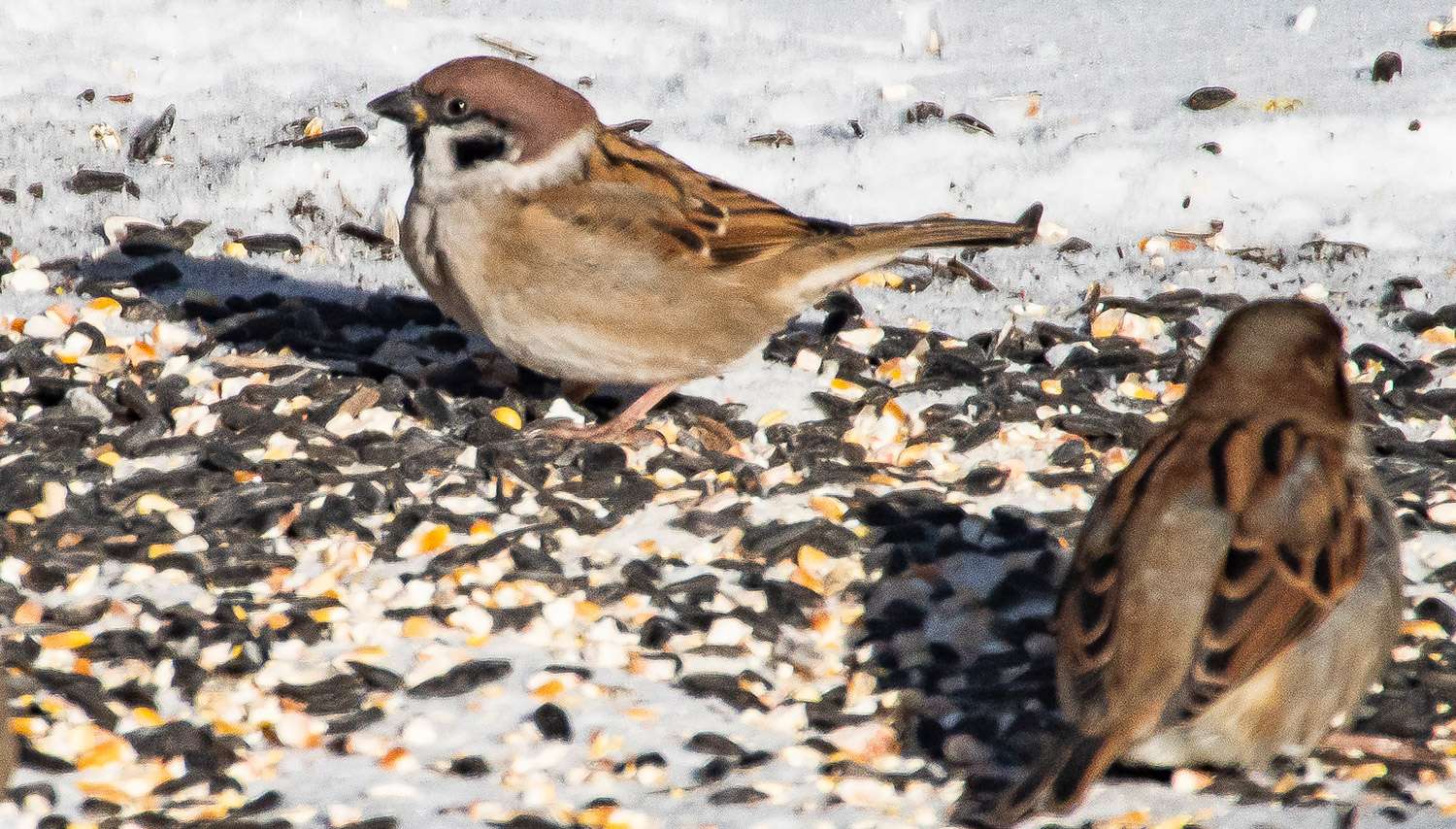 The Eurasian Tree Sparrow seen here on 6 Dec 2021 at Steinbach, Manitoba was about the eighth for the province, not counting hybrids. Photo © Dennis Fast. 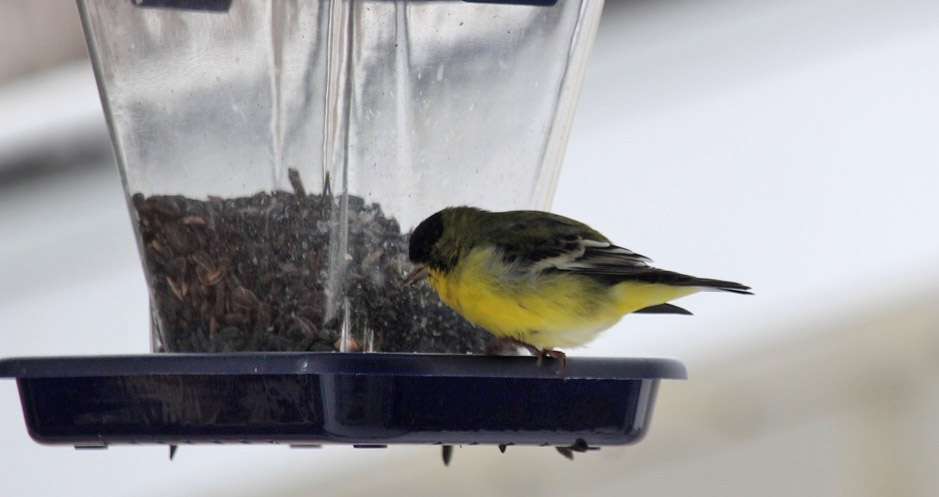 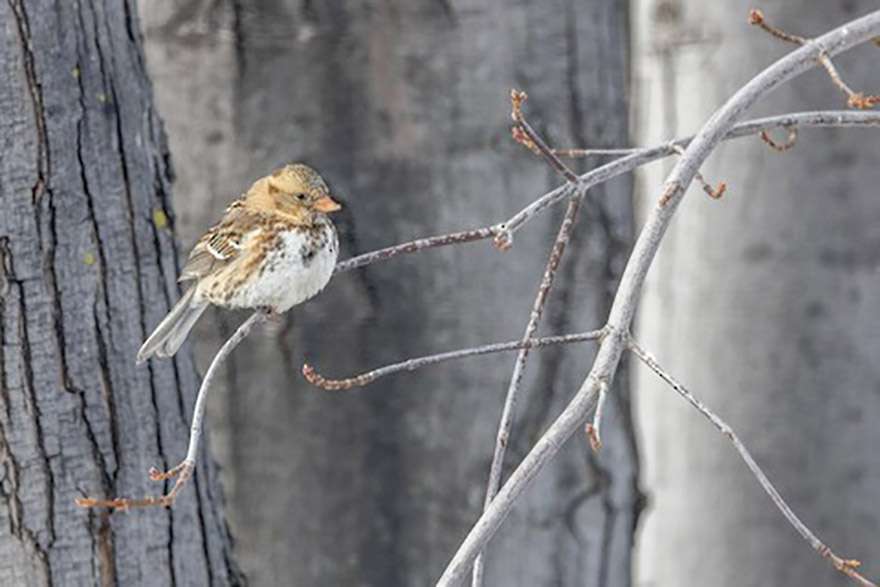 Harris’s Sparrow is a rare winterer in the Prairie Provinces. This bird was at the Pembina Valley, Manitoba on 27 Feb 2022. Photo © Carol Holmes. 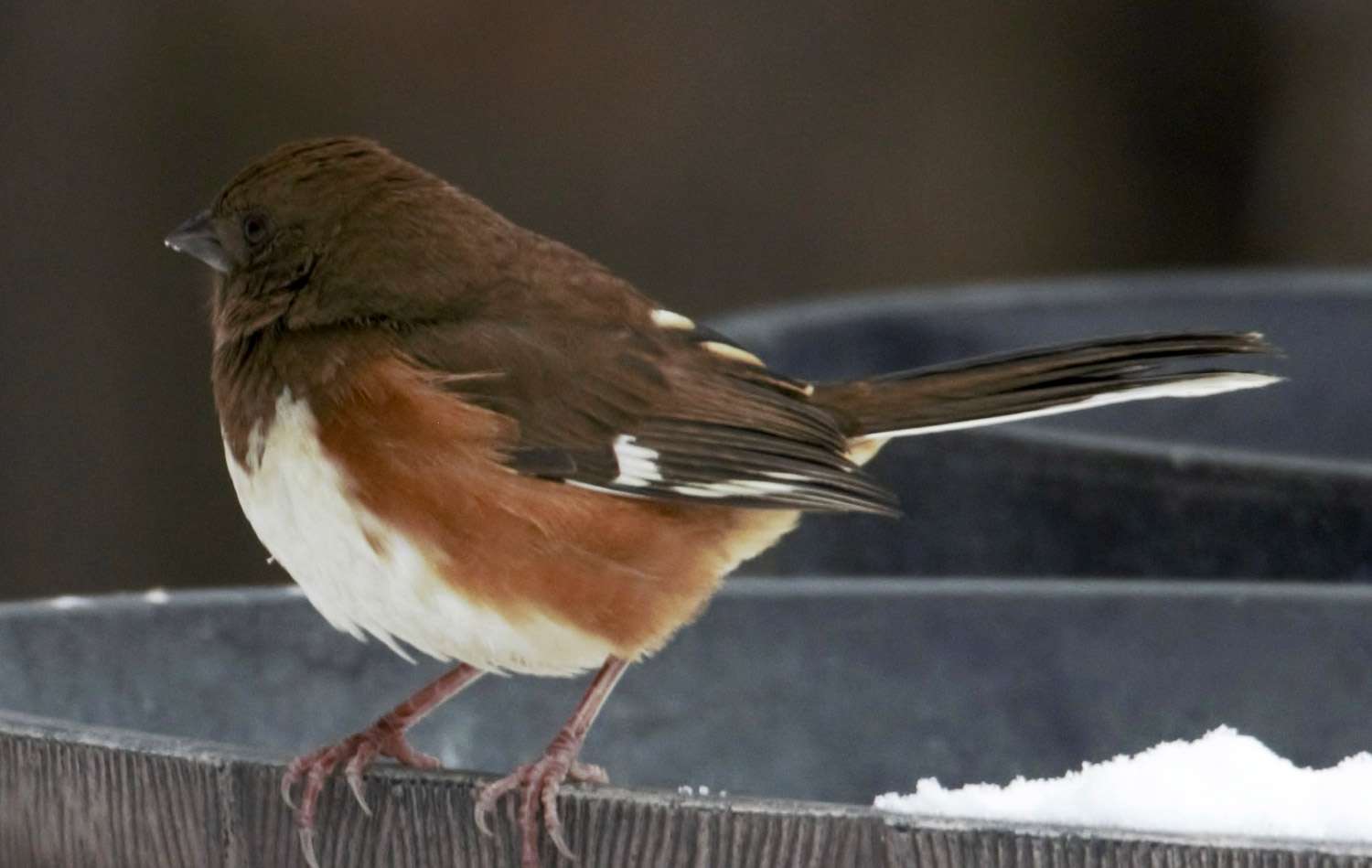 This Eastern Towhee, seen here on 12 Dec 2021 at Sherwood Park, Alberta, was both east of its usual range and rare in winter. Photo © Laura Newstead. 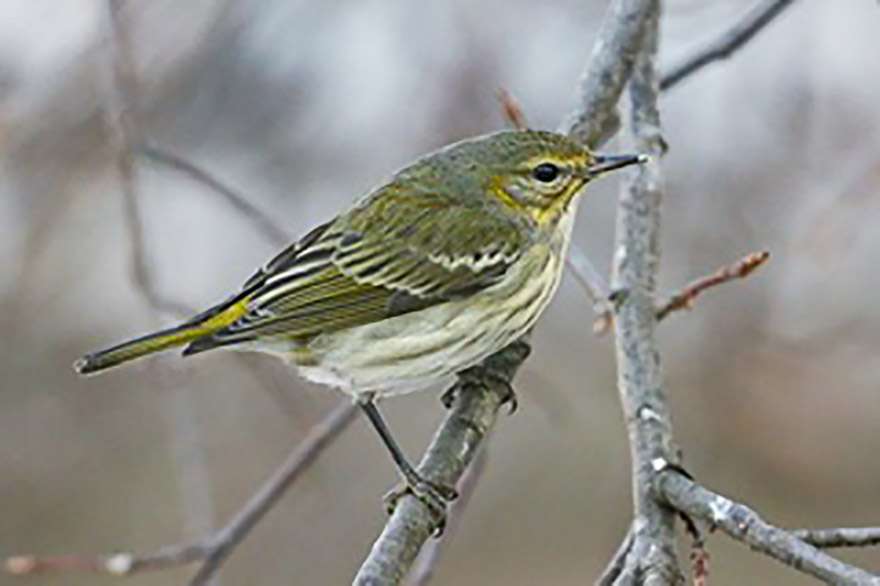 One of only a handful of warbler species to occasionally linger into winter in the Prairie Provinces, this Cape May Warbler was at Devon, Alberta on 2 Dec 2021. Photo © Ethan Denton.