The Prairie Provinces experienced wild swings in the weather during the winter of 2020–2021. Snowfall was extremely low throughout the south of the region, continuing the dry cycle of the past few years, and by the end of the period little snow cover remained. While December was generally seasonable, January was very mild (the second-mildest ever in southern MB). On the other hand, much of February was bitterly cold. In Winnipeg, the thermometer remained below -20°C for nearly two weeks, the longest such severe cold spell since 1996. Late in the month conditions ameliorated. Surprisingly, many waterfowl made it through the cold, as did half-hardy species such as Carolina Wren. Early winter saw an influx of “northern” owls and finches, but numbers dwindled as the season progressed.

Several species of waterfowl that are usually rare or uncommon in winter were recorded. Survival rates appear to have been high, even through the cold spell in February. Most notable of these were a Wood Duck at Wascana Lake, Regina, SK (AM, m. ob., ph.), an American Black Duck at Winnipeg, MB (AC, m. ob., ph.), two Canvasbacks, up to 14 Redheads, 30 Lesser Scaup, two Greater Scaup and five Bufflehead at Gardiner Dam, SK (m. ob.). A White-winged Scoter at Waterton Lakes NP, AB was last seen 9 Jan (BP, ph.). Three Buffleheads and a Common Merganser wintered successfully at a Winnipeg sewage lagoon (BSh, m. ob.). Other noteworthy sightings included two Cackling Geese at Gardiner Dam 31 Jan (KL, ph.), an American Wigeon at Melfort, SK 8 Jan (VS), Long-tailed Ducks at Melfort 1 Jan (BD, ph.) and at Genesee Lake, Edmonton, AB 22 Jan (PZ), plus a Ruddy Duck at Gardiner Dam 5 Dec (KL). A Pied-billed Grebe was at Brooks, AB 11 Jan (JB). Eared Grebes at Gardiner Dam 3 Dec (SO) and Pine Coulee Reservoir, AB 8 Dec (RL) were tardy. An Anna’s Hummingbird present at Calgary, AB since 17 Oct, was last seen during a cold snap on 24 Jan (CR, m. ob.). A Virginia Rail was heard at Cave and Basin Marsh, Banff NP, AB 5 Jan. This is the only location in the region where this species is noted with any frequency during winter (AE). Although American Coot regularly winters at Boundary Dam, SK, tallies of 20 on the 3 Jan CBC (KH) and 37 on 3 Mar (DW, ph.) were unusually high. The only report of a shorebird, a Wilson’s Snipe, came from Fish Creek PP, AB 12 Feb (RR). Rarest of the gulls was a Black-legged Kittiwake at Chin Lake 5 Dec (DS, ph.), providing AB with its fourth winter record. Somewhat more frequently reported in early winter were a “Thayer’s” Iceland Gull at Gardiner Dam 3 Dec (NS, ph.) and a Glaucous Gull at the same location 14 Dec (RD, ph.). Another Glaucous Gull was at Wabamun Lake, AB 1 Jan (m. ob., ph.). A Great Blue Heron survived at FortWhyte Alive, Winnipeg, until at least 20 Dec, long enough to provide a first-ever record for the Winnipeg CBC (EO).

The earliest trickle of migrant raptors passed the Pembina Valley Holo Crossing, MB (Windygates) hawkwatch on 25 Feb, in the form of two Northern Goshawks and five Bald Eagles (RW). Reports of wintering Sharp-shinned Hawks came from Beausejour, Carman, Brandon, Garson, Morden, Selkirk and St. Andrews in MB, and Maple Creek, Regina and Saskatoon (two birds) in SK. Cooper’s Hawks are much rarer than Sharp-shinned Hawks in winter, and frequently misidentified. However, credible sightings came from Balmoral 21 Dec (PD) and Winnipeg, MB 18 Jan (JW). A Red-tailed Hawk was photographed near Birds Hill PP, MB 9 Jan (CAV, ph.), while a “Harlan’s” Red-tailed Hawk was a good find at Regina 14 Feb (AM). One Red-tail at Moose Jaw, SK 25 Feb was likely an early migrant (JM). A few Rough-legged Hawks lingered in MB into January. An Eastern Screech-Owl in southeast AB 17 Jan was at the extreme western limit of the species’ range in the region (EV, ph.). “Northern” owl numbers varied by region and month. Snowy Owls were fairly prominent through the winter southwest of Winnipeg, but numbers were below average in AB. A survey near Lajord, southeast of Regina, turned up 14 birds on 6 Feb. It was a good winter for Northern Hawk Owls and Great Gray Owls in AB (fide JF), but after an early season influx of the latter in southeastern MB they became scarce. Only southern SK hosted above-average numbers of Short-eared Owls; e.g. eight were recorded in the Regina area 19 Feb (CH). At least nine Gyrfalcons were tallied in southern MB. This higher-than-usual number of reports can at least partly be attributed to increased sharing of sightings on social media. A Prairie Falcon near Lowe Farm, MB was a winter rarity in the province (R&MF).

A Pacific Wren was present at Lethbridge from 25 Nov through the period, providing AB with its fifth winter record overall and fourth since 2018 (TD). The identification was clinched with sound recordings. A Carolina Wren first noted in Winnipeg 15 Dec survived the cold snap in February and was still present in late March (CB, m. ob., ph.). Although there were at least seven previous winter records for the province, this was the first bird known to have survived through the season. Ruby-crowned Kinglets at Neilburg, SK 4 Dec (KW, ph.) and Fish Creek PP 12 Jan (FS, ph.) were winter rarities. Equally rare was an Eastern Bluebird at Pilot Butte, SK, first noted on 1 Dec (BSc) and subsequently seen by many (m. ob., ph.). It was found dead during a severe cold spell on 9 Feb. The Birds of SK (2019) lists only one previous winter record for the province, of two birds seen during count period of the Craven CBC in December 1998. Townsend’s Solitaires wintered at Maple Creek, Saskatoon and Wascana Lake (m. ob.), while one remained at Winnipeg into spring (appropriately at Townsend Avenue) (DD, IW, m. ob., emph.). Swainson’s Thrushes at Winnipeg 4 Dec (KF) and at Calgary 20 Dec (KR) were well-described. We are not aware of previous winter records for the region. Less rare were Hermit Thrushes at Saskatoon 26 Dec (RD, ph.) and Winnipeg until 12 Dec (MK, TR). A Brown Thrasher at River Hills, MB was last reported 1 Jan (m. ob., ph.). A Northern Mockingbird at Okotoks, AB, first noted the second week of December, remained through the season (m. ob., ph.), while another bird was at Pilot Butte, SK 31 Jan (DH). Bohemian Waxwings were generally scarce, with the largest flock of 700 reported at Saskatoon. A Eurasian Tree Sparrow, about the fifth for MB (not counting hybrids) was photographed at Garson 18 Jan (SC, ph.). An American Pipit at Calgary 8 Feb was unexpected (AAM, ph.).

AB recorded its sixth Brambling, a one-day wonder at Banff on 17 Jan (Bob Smith, ph.). Evening Grosbeaks were reported as “low” in AB, but in southeastern MB there was a huge influx in early winter, after which numbers dropped sharply. Even with reduced coverage due to the Covid-19 pandemic, counters on the Pinawa-Lac du Bonnet CBC tallied 588 birds, the highest total since 2014 (fide PT). Pine Grosbeaks were “less than average” in AB, but quite prominent in MB early on. Only one Gray-crowned Rosy-Finch was reported, at Vanscoy, SK 25 Jan (JS, ph.). Redpolls were scarce throughout. White-winged Crossbills were widespread in southern SK and especially southern MB, but scarce in AB. Unusual sparrows, all single birds, included the following: Chipping Sparrows at St. Germaine, MB 4 Dec (FC, ph.) and Winnipeg up to 15 Feb (JG), an “Oregon” Dark-eyed Junco at Winnipeg 27 Feb (RM, ph.), a Savannah Sparrow at Fish Creek PP 21 Jan (DPa, ph.), Song Sparrows at Portage Creek, MB 26 Dec (Cal Cuthbert) and at Moose Jaw 6–20 Feb (DPi), a Swamp Sparrow through the season at FortWhyte Alive (m. ob.), a Spotted Towhee at Portage la Prairie, MB 12 Dec (CC) and an Eastern Towhee at Winnipeg 26 Dec (EA). A Baltimore Oriole near Austin, MB 24 Dec represented the third winter record for the province (SM, ph.). AB hosted the only warblers reported during the period. A Cape May Warbler at Calgary, first reported 25 Jan (LF, ph.), was present until at least 6 Feb. Both Edmonton and St. Albert recorded their first-ever CBC Yellow-rumped Warblers, respectively on 20 and 26 Dec. The latter last noted on 31 Dec. In AB Northern Cardinals were found at Kitscoty (JA, ph.) and at Two Hills (NL, ph.). A pair that resided at Sherwood Park, AB for about a decade was last reported in 2019 (fide JF). 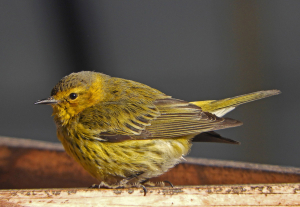 Any warbler in winter in the Prairie Provinces is rare, making this Cape May Warbler at Calgary, Alberta, here on 29 Jan 2021, a nice find. Photo © Ray Wershler. 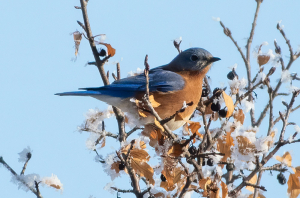 Nicely photographed was this Eastern Bluebird at Pilot Butte, Saskatchewan on 31 Jan 2021, where it died during a severe cold-snap on 9 Feb. Photo © Annie McLeod. 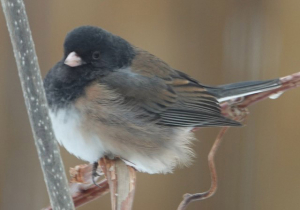 Dark-eyed Juncos winter in small numbers in southern Manitoba, with the vast majority being “Slate-colored”. “Oregon” Dark-eyed Juncos are very rare at this season and frequently mis-identified. This bird was at Winnipeg 27 Feb 2021. Photo © Randy Mooi. 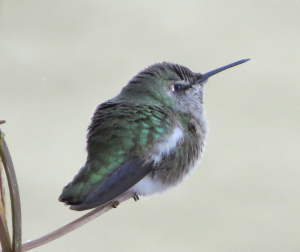 This Anna’s Hummingbird at Calgary, Alberta, present since fall, proved quite hardy, as it survived until at least 24 Jan 2021. Photo © Carla Radke. 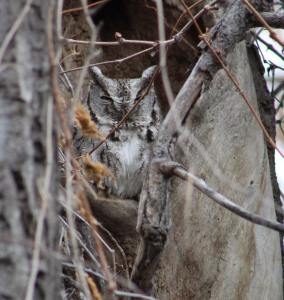 The exact location of this Eastern Screech-Owl in southeast Alberta was kept a secret, to prevent undue attention and possible harassment. It is seen here on 17 Jan 2021. A second bird was reportedly also present. Photo © Erik Vokes. 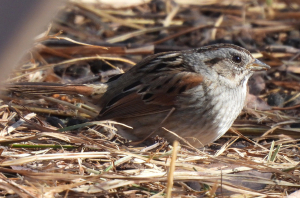 This Swamp Sparrow, seen here on 29 Dec 2020, made it through the winter at FortWhyte Alive, a nature centre in Winnipeg, Manitoba. It was seen by many. Photo © Marlene Waldron. 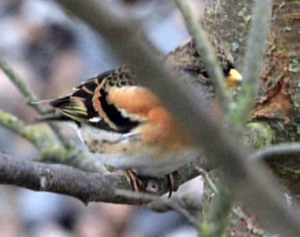 Alberta’s sixth Brambling was present at Banff for just one day (17 Jan 2021) and was seen by the photographer only. Photo © Bob Smith. 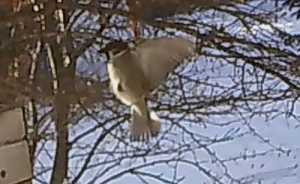 Eurasian Tree Sparrows have shown up from time to time in Manitoba, even managing to successfully produce hybrids. This bird showed up on 18 Jan 2021 at a feeder near Garson; it was not seen again with certainty. Photo © Sandra Cote. 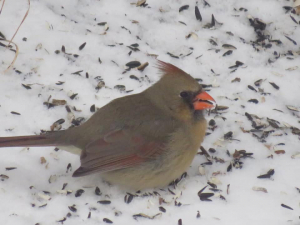 This Northern Cardinal at Kitscoty, west of Lloydminster, Alberta, here on 21 Jan 2021, was well northwest of its usual range. Photo © JoAnn Aman. 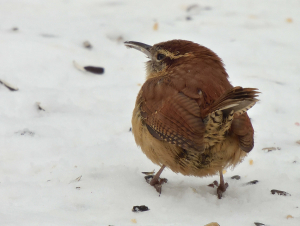 The first Carolina Wren known to have survived a Manitoba winter, here at Winnipeg on 3 Feb 2021, was first seen in Nov 2020. Although observed by several birders during the winter, it remained rather elusive until it started singing in spring. Photo © Marlene Waldron. 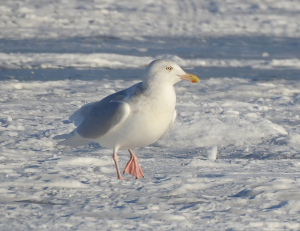 While Glaucous Gulls linger not infrequently into December in the south of the Prairie Provinces, mid-winter sightings, such as this bird at Wabamun Lake, Alberta 21 Jan, are rare. Photo © Paul Brown. 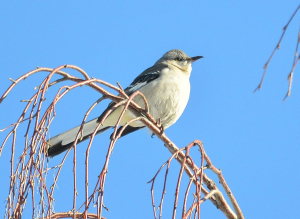 This cooperative Northern Mockingbird wintered at Okotoks, Alberta, where it was enjoyed by many—here on 19 Feb 2021. Photo © Gerry Fox.