The winter of 2019–2020 was generally a quiet one, bird-wise, in the Prairie Provinces. After the very wet fall of 2019, precipitation during the winter was light and temperatures were generally within the normal range. The most noteworthy rarities were a Tundra Bean-Goose in Saskatchewan, a Yellow-bellied Sapsucker and a Carolina Wren in Manitoba and a Green-tailed Towhee in Alberta.

A Tundra Bean-Goose at Wascana Park, Regina, discovered on 7 Dec 2019, lingered into April 2020 and was seen by many. It represented the first record for Saskatchewan and the second for the region. It may have been the same bird that was at Lethbridge, AB in Jan 2019 (ph. Annie Mc Leod, Joel Cherry, m. ob.). A male Eurasian Wigeon, rare at any time in Saskatchewan, was at Qu’Appelle Dam 1 Dec (Ryan Dudragne, Guy Wapple, Nick Saunders). Also notable were two Long-tailed Ducks at the Qu’Appelle River near Crooked Lake, SK 6 Dec (Don Weidl) and a single bird at Pine Falls, MB 6–12 Jan (ph. Paul Friesen, m. ob.). A tardy Red-necked Grebe was at Great Falls, MB 1 Dec (Rudolf Koes, Garry Budyk). A Golden Eagle at Windygates, MB 21 Feb was a rather early migrant (Al Schritt). Sharp-shinned Hawks have become regular winterers in small numbers in the southern prairie provinces in the past decade or so. This winter there were sightings at Saskatoon, SK, and Camp Morton, Birds Hill PP and Winnipeg, Manitoba. At least two unidentified Accipiters in Manitoba were likely this species. Cooper’s Hawk is much rarer in winter, and often mis-identified, but there were three reports in Manitoba. Great Gray Owl numbers were decent in Alberta, while Northern Hawk-Owls were scarce. The opposite was the case in Manitoba, with few Great Grays but quite a few Northern Hawk-Owls. Numerous Snowy Owl reports came in from areas near Calgary and Edmonton, AB. Four Red-bellied Woodpeckers were found on the Winnipeg CBC 15 Dec; the highest tally ever. A Yellow-bellied Sapsucker struck a window near Tyndall, MB 2 Feb and was taken for rehabilitation; this represented the second mid-winter record for the province (ph. Sandra Cote). Also at Tyndall was a hybrid yellow-shafted x red-shafted Northern Flicker 25 Jan (ph. Sandra Cote).

A Carolina Wren visited a Winnipeg feeder from late Jan until at least 17 Feb. There were six previous winter records and about 26 records in all for Manitoba (ph. Frank & Jacquie Machovec). Townsend’s Solitaire is an annual, but rare visitor in Manitoba. This winter at least one was in Winnipeg from late November until at least 17 Jan (m. ob.). A Varied Thrush visited the Bird’s Hill area of Manitoba from 23 Dec until at least 8 Jan (Ruth Cameron, ph. m. ob.). A Northern Mockingbird at Lethbridge, AB, continuing from fall 2019, was last reported in January (m. ob.). The Alberta winter finch numbers were dismal. Evening Grosbeaks continued their decline, while Red and White-winged Crossbills were almost non-existent. Common Redpolls and Pine Siskins were widespread, but in low numbers. Pine Grosbeaks bucked the trend with a decent showing. The usual “winter finches” – redpolls, Pine Grosbeaks and crossbills were all scarce in southern Manitoba, but Purple Finches and Pine Siskins were much more common than usual; on the Pinawa – Lac du Bonnet CBC 28 Dec a record-high 384 Purple Finches were recorded, just edging the previous record of 382 set in 2016. The species is absent most years. A Gray-crowned Rosy-Finch at Swan River, reported on 2 Feb, had apparently been present for some time (ph. Frank Foidart). Song Sparrows, very rare in winter in Manitoba, were seen at Winnipeg on 12 Dec (ph. Garry Budyk) and on the Winnipeg CBC 15 Dec—two birds (Ray Méthot, Cam Nikkel, Charles Begley). A Green-tailed Towhee at Fort Mc Murray, AB from 13 Dec into Jan was the ninth record for the province (m. ob., ph. Ben Evans). 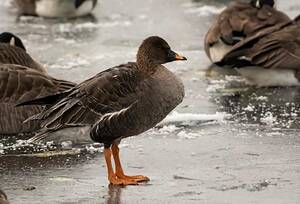 This Tundra Bean-Goose at Wascana Park, Regina, Saskatchewan, discovered on 7 Dec 2019 (here), remained into spring 2020. It provided the province with its first-ever record and the region with its second record. Photo © Annie McLeod. 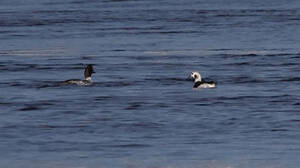 While Long-tailed Duck is a regular – albeit rare – late fall/early winter migrant in southern Manitoba, this bird at Pine Falls on 6 Jan 2020 was unusually late. It lingered until at least 12 Jan. Photo © Paul Friesen. 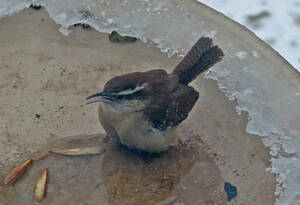 This Carolina Wren at Winnipeg, here seen on 17 Feb, provided Manitoba with about its 27th record overall and its eighth winter record. It had apparently been present for a few weeks. Photo © Frank Machovec. 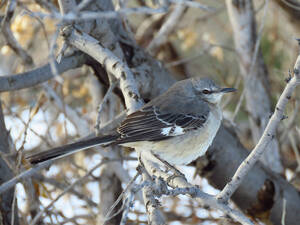 A few Northern Mockingbirds show up annually in the Prairie Provinces. This bird was at Lethbridge, AB on 8 Jan 2020. Photo © Ken Orich. 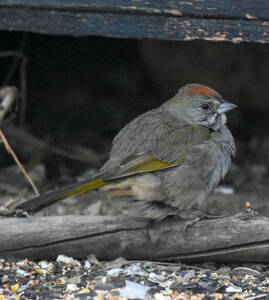 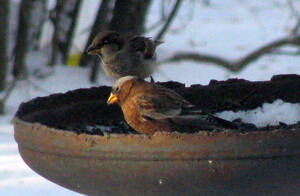 This Gray-crowned Rosy-Finch at Swan River, MB, seen here on 2 Dec 2019, had been present for some time. It lingered until 11 Dec 2019 and represented about the 25th record for the province. Photo © Frank Foidart.